Crypt of the Necrodancer Review

There have been a lot of Rogue-lite/like/inspired games in recent years, particularly from the indie game development community. While some have been decent, or even great in some cases, many have been entirely derivative. To the point where this trend seemed to be about at its end. Crypt of the Necrodancer by Brace Yourself Games is indeed another roguelike dungeon crawler, but puts its own spin on things, fusing the action of the game with rhythm elements.

In Crypt of the Necrodancer, players control a female character named Cadence.  While other characters can be unlocked as you progress through the game, Cadence is who you’ll start with and who the game’s introductory story bits are geared around.  After taking a nasty fall while looking for her father she awakens in the Crypt of the Necrodancer and the journey begins.  While the story elements of this game are quite thin, all the gameplay hooks of a good roguelike are here.

Crypt of the Necrodancer has been in Steam’s Early Access program since last year and has gained quite a buzz. The biggest reason likely is the ingenuity of the incorporation of the rhythm mechanics that are tied to the character and enemy movements. It’s something that feels quite fresh, not only making the game fun to play, but adding actual gameplay risks and rewards to make it feel unlike a gimmick. See, players are rewarded for moving to the beat in Crypt of the Necrodancer along 1×1 tiles, and will earn a multplier for doing so. With randomly generated enemies, power ups and map layouts, each run of the game feels varied. Necrodancer hits that sweet spot like indie darling Spelunky did a few years back in its HD revival. It’s a game where you continually grow as a player, becoming more capable and familiar with the challenges ahead, allowing you to push deeper and deeper into more challenging parts of the game. 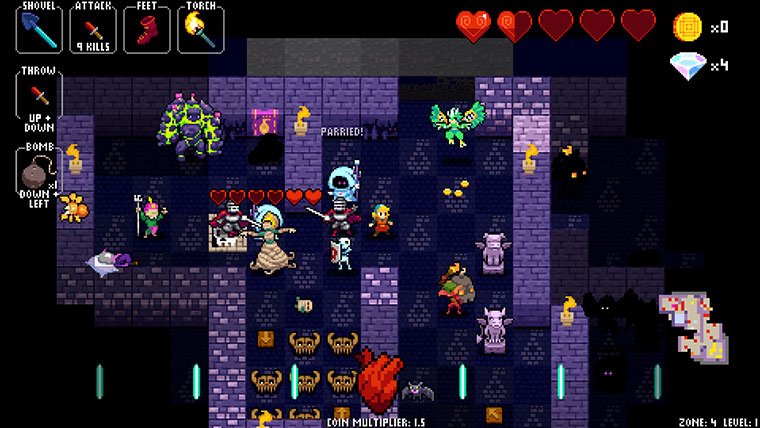 Players will continually delve into the randomly generated crypts in hopes of beating each level and ultimately reaching a boss.  Each level is stocked with numerous enemies with varied attacks and movement patterns.  Players must not only have the ability to move to the beat of the music, but recognize multiple patterns on the screen to avoid attacks while plotting their own.  If you miss a beat you can’t move until the next one, this adds a wrinkle to the gameplay.  Sometimes exposing you to enemy attacks, but if you continually stay on queue, you’ll earn coin multipliers which will allow you to visit shopkeepers for life-extending items.  While your goal in each level is to reach a stair case and descend from said level, there’s plenty to uncover in terms of items and power-ups in each stage via hidden passages/shops that can be accessed by tunneling or bombing through walls. You’ll uncover stronger weapons to kill enemies more quickly, armor which allows you to take more hits, healing or stat buff items, and many others.

You’ll also find diamonds along your journey.  And when you do, you can bring them back to the game’s hub world.  Here you can visit different NPCs that you unlock as you go, offering you persistent upgrades like an extended health bar, or new weapons that will randomly pop up in treasure chests.  The stronger the power-ups, the more diamonds you’ll need.  The hard part about this is that you can only bring back your diamonds from a single life.  Each time you die, you can exchange what you have, but entering into the crypt again will have you starting from scratch (aside from any permanent power-ups you may have purchased). 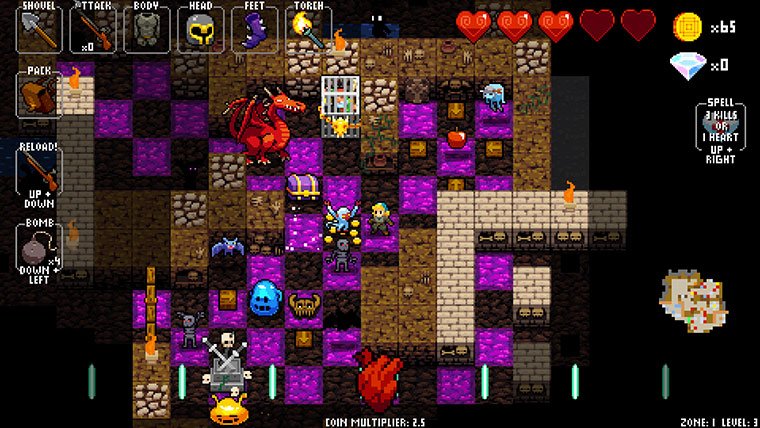 Necrodancer is one of those games that’s accessible and easy to learn, but incredibly difficult to master.  It’s got numerous ways to play.  You can opt to use a controller, keyboard,  or even a dance pad if you’re up for it.  While we didn’t play this with the dancepad, we did find it quite fine on the more traditional controller or keyboard options. The controls here are pretty simple.  You’ll use either the arrow keys on a keyboard for movement, or the face-buttons on a controller to move.  Up, down, left, right — it’s that simple. The challenge truly comes from learning the enemy attacks, and moving fluidly while navigating to each staircase.  Like the Spelunky or Rogue Legacy that Necrodancer emulates, there’s just no substitute for repetition.  As you become familiar with enemy attacks, and the thumping soundtrack by Danny Baranowsky, you can’t help but improve.

The soundtrack for Crypt of the Necrodancer is pretty fantastic, it’ll certainly get under your skin, urging you to come back for just another turn.  But, you can also import your own music into the game. Simply head into the custom music section of the menu screen and you can make any song on your computer a song for an assigned level. We had mixed results with the game using a beat detecting algorithm to determine what the tempo of our songs should be.  Some worked wonderfully, while others felt just a bit off.  The pixel art style of Crypt of the Necrodancer won’t be for everyone either, but I found it enjoyable with a number of different enemy types to keep things looking lively.  Crypt of the Necrodancer has quite a few options outside the straight single player storyline as well.  There’s a daily challenge mode where players will all play the same dungeon in hopes of racking up the most coins.  The game also features a local cooperative mode that has players teaming up to control two adventurers.  Where one player uses the arrows on the keyboard to control their player, while the other uses WASD.

For fans of these types of games, there’s really not much to complain about here. While Crypt of the Necrodancer’s main differentiator is the rhythm mechanic that entices you to hop to the beat for a chance at earning more spending cash, its a roguelike through and through. In the end, making sure you hit the beat feels inconsequential at times, maybe too unimportant once in awhile. Sometimes its easier to just stay still and try and figure out the enemy patterns without risk of slipping up. But Brace Yourself Games hits a good balance here. Crypt of the Necrodancer is a game that feels difficult, but fair. Any more penalty to not keeping a beat would probably start to get frustrating. I found my deaths usually came from impatience or a lack of preparation or familiarity with enemy types. Making it through any given level on Crypt of the Necrodancer felt more about skill than it did luck.

Crypt of the Necrodancer