The latest news in the world of video games at Attack of the Fanboy
October 9th, 2011 by William Schwartz 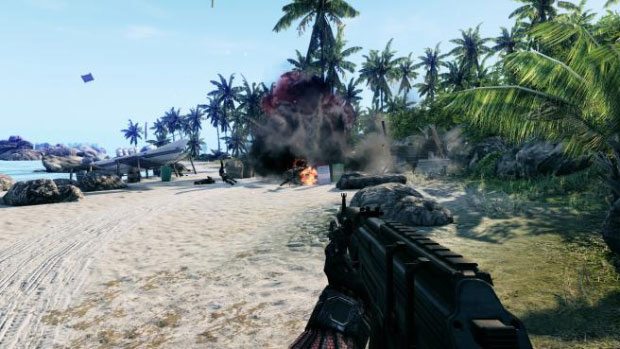 Ask any pc gamer if they thought Crysis would be possible on consoles with quality comparable to the original version and they likely would have laughed in your face.  The game has been the benchmark for PC gaming this generation, and at the game’s launch in 2007, there were very few people who could run the game in all its glory.  While Crysis may have been widely known as graphical powerhouse on PC, the game also introduced a unique gameplay style that focused around the Nanosuit.  Whatever your gameplay style, the Nanosuit could handle it, offering gamers stealth options or the ability to take enemies head.  How does this game stack up nearly a half decade from release?  Quite well as it turns out.

From a gameplay perspective, Crysis on console doesn’t drop a thing.  The raw power afforded the player translates well, and if you played Crysis 2 on console, you know this all too well.  The free flowing gameplay which was offered in Crysis 2, is even more evident in the original, with a wide open jungle being your stomping grounds.  The luscious jungles of the original offer a great backdrop to showcase the tools available to you.  Sneaking around to dismantle the enemy forces, scaling the hills with your power jump to move into elevated positions, or armoring up to take the enemy head on are all viable options.  The nanosuit controls feel great on console as was evident in Crysis 2, and there is no difference here.

The Nanosuit controls feel great on console as was evident in Crysis 2, and there is no difference here.

The story of Crysis isn’t exactly the most original, but this tale of enhanced super soldiers vs. aliens is still quite interesting.  Without giving too much of the plotline away, Delta Force is sent to Korea to investigate a distress signal. After freefalling to the jungle under the cover of night, you’ll find that the Korean occupied army is firmly embedded in the area.  Early on you’ll find that this isn’t your only enemy on the island, and certainly not the most dangerous.  As the story unfolds, you’ll discover all of the secrets that the island holds.

For those that bought into the hype heading up to release, it’s not hard to see that Crysis certainly doesn’t perform to the visual fidelity benchmarks that are offered on PC.  It’s definitely not a bad looking game by any means, but having seen the game run at max settings on PC and you can tell that the PC did things four years ago that still can’t be achieved on console.  It says alot about the game though.  The visuals of this four year old game are on par with what is being offered currently on consoles, so it’s definitely not disappointing by any means.

These problems are noticeable, but they don’t really detract from the core gameplay, which is a ton of fun.

Lighting and water effects are spectacular and really bring the island alive.  The game isn’t completely without its problems however.  Audio cuts out during key conversations and cutscenes, graphical miscues occur when pressing close to cover, and there some weird clipping issues to be found with the enemies and the environment. While these problems are noticeable they don’t really detract from the core gameplay which is a ton of fun.

If you can resign to the fact that current generation consoles aren’t capable of what PC’s are, you’ll have a blast with Crysis on console.  If you enjoyed Crysis 2 and your first experience with the game was on the PS3 or Xbox 360, you owe it to yourself to check out this spectacular port. It’s available for download now on the PlayStation Network Store and Xbox Live Marketplace