The latest news in the world of video games at Attack of the Fanboy
October 25th, 2016 by William Schwartz 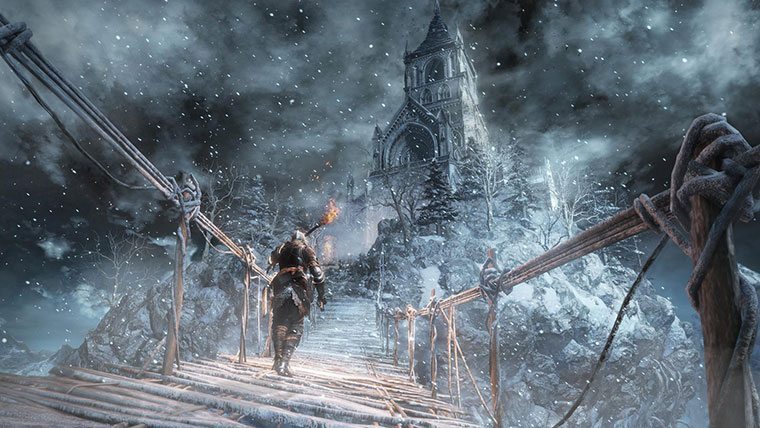 The Dark Souls series has had an interesting run of the spectrum when it comes to downloadable content.  Where the original game’s add-on content was mind-bogglingly hard to discover as well as hard to progress in and actually play, the second game’s was more in-line with contemporary expansions.  Ashes of Ariandel, the first DLC for Dark Souls 3 is somewhere in between.  This end game content, set on the snowy backdrop of a new area called “The Painted World of Ariandel” is frustratingly difficult, adds new weapons and items to find, and mixes the best gameplay elements of Dark Souls 3 for a worthy expansion to the base game.

Ashes of Ariandel is accessible through the Cleansing Church bonfire near Cathedral of the Deep.  A new NPC will start the questline for you, transporting you to this brand new area.  Most of Ariandel is a snowy and mountainous, except for the few times that you head indoors.  The large area has multiple shortcuts to unlock, and a few bonfires as well.  That’s to be expected, but the content is definitely geared towards higher level players.  Ariandel doesn’t offer up its shortcuts and bonfires without many, many tough enemies standing in the way of your progress.  There’s a good variety of enemies here, from packs of wolves to giant knights that’ll certainly test your mettle when it comes to combat and progression.

Ariandel is basically one big area with no paths to the core game content.  If it’s got a fault, it’s in the lack of boss battles you’ll encounter in the 5+ hours of content.  There’s really only two, the mandatory main boss, and an optional fight that rewards you exclusive items.  Progression is mostly gated through standard enemies, but there is also a fight with a tough NPC type character about midway through.  Regardless, it’s still pretty tough.  The introduction of new types of enemies with brand new attacking patterns to master will keep your hands full, and are challenging enough as you frantically search for that next bonfire or shortcut to make things easier.

The two bosses govern different aspects of this new DLC.  The mandatory main boss will allow you to finish the single player content, while the second optional boss drops an item which allows you to play in a new area called The Arena.  This is a PVP area with two new multiplayer gametypes to participate in.  Duel is a one on one fight to the death that ends when someone dies.  The twist here is that players cannot use there Estus Flask during these encounters with other players.  Brawls on the other hand pits players against one another in multiple matches, with the player having the most kills at the end of the match being the winner.  The wrinkle with this mode is that multiple players or teams can fight side by side — 2v2, 3v3, or free for alls with up to six players. From Software has taken some steps to prevent grouping up with friends and griefing in this mode, but it still seems like players are able to do so.  Perhaps as more players get their hands on the content this will stop happening. 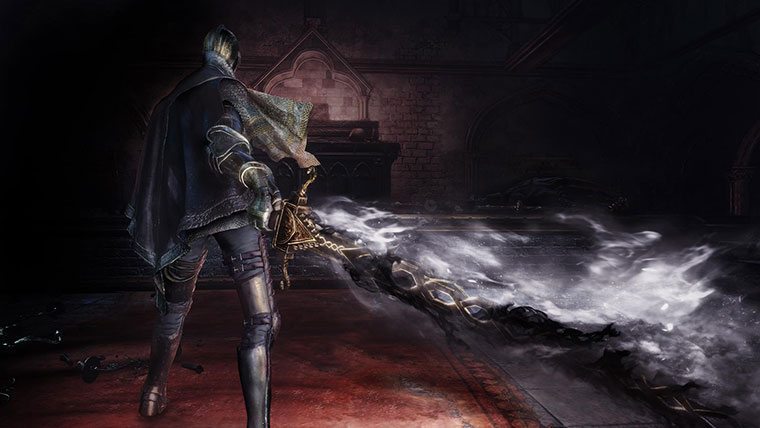 Ashes of Ariandel is most certainly aimed at high level players who’ve completed the main game, or have completed multiple playthroughs via NG+.  Even the most diehard Dark Souls players who’ve completed multiple NG+ runs will find challenge here.  Enemies scale with your progression in the game, and even a maxed out character can have a pretty short life span in this snowy wasteland.  There are nearly 20 new weapons and shields, 5 new armor sets to unlock, as well as spells and rings to find.  There’s plenty to do here in the core single player experience, and if you’re into PvP you could definitely sink 10’s of hours into this new content.

From Software plays to its strengths with Dark Souls 3: Ashes of Ariandel giving players more difficult content to progress through in a big new area to explore.  While a little light on big boss fights, the new multiplayer Arena mode has the potential to keep the fun going long after players have mastered and discovered all the new secrets and items this content has to offer.