The latest news in the world of video games at Attack of the Fanboy
September 19th, 2010 by William Schwartz 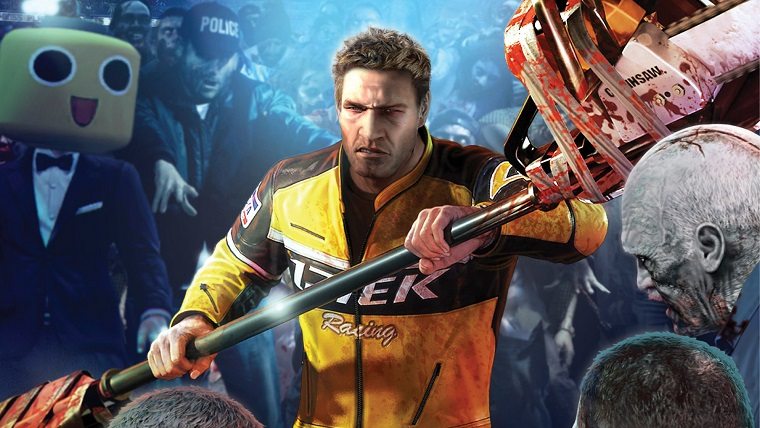 The sequel to the million-plus selling Dead Rising, Dead Rising 2 sees the player take on the role of former Motocross champion Chuck Greene, who has come to Fortune City, America’s newest gambling paradise, to compete in “Terror is Reality,” a gruesome game show that dares contestants to survive zombie-filled environments for big money prizes at the delight of TV audiences around the globe. Chuck’s motivation for taking part and risking life and limb is his daughter Katey, who since being bitten by a zombie requires a daily dose of Zombrex to prevent her from turning into one of the living dead. There’s no denying that Zombrex works, but since it’s the only drug on the market, its price is high.

During his time in Fortune City a zombie outbreak occurs and Chuck must survive the onslaught of the undead for 72 hours. Pitted against two fearsome threats – tens of thousands of zombies and the constant countdown of the clock – while potentially rescuing other survivors of the zombie apocalypse, players must also unravel the greater conspiracy behind the outbreak and as importantly find the Zombrex necessary to stop Katey from joining the ever growing zombie horde. Players will shoot, stab, carve and drive their way through enemies in order to beat the clock and survive 72-hours in the darkly comedic, no holds-barred confines of Fortune City. (Capcom)

Dead Rising may have been the game to start the Zombie killing craze back in 2006, released on the Xbox 360, Capcom sold a ton of copies of this exclusive action adventure/survival horror game on the less than a year old Xbox 360.   Deemed a commercial success, Dead Rising pitted protagonist Frank West against hordes of zombies, in what seemed to be a never ending swarm of slowly moving targets that could be dispatched by a wide array of weaponry to be found all around and including your surroundings.

Much of the gameplay in Dead Rising 2 remains the same.  Gone is West in the new campaign, replaced with Chuck Greene an ex motocross champ and current Terror is Reality champion, a game show that revolves around the slaughtering of zombies.  Much of the mechanics remain the same in DR2.  Greene will fight off zombie hordes while accomplishing specific missions.  There seems to be a little more variety in the mission types, but the core time based mechanic remains intact.  New to the series is the workshop, where Greene can build customized weaponry such as a nail spiked baseball bat, a paddlesaw, or even the freedom bear by purchasing or earning cards that unlock these combinations.  Missions will have you slicing, shooting, smashing, and brawling your way to objectives that are either story moving, or saving trapped humans in the fictional Fortune City.  Modeled after Las Vegas, Greene will find himself not only fighting for his survival but for his daughter who requires special medication every 24 hours.

A bit more meaty in the story department Dead Rising 2 is set five years after the events of the original Dead Rising.  Having spread across the entire United States the parasite that caused the outbreak in Willamette there are very few unaffected humans in the fictional setting.  The game begins with Chuck being a contestant in the Terror is Reality game show, which champions those that slaughter the most zombies in an allotted time period.  The story sets off with the competition and shortly thereafter the escape of countless zombies now loose in Fortune City.  As the story unfolds we learn of a plot to blame Green for the release of the outbreak in Fortune City, and Greene will also try to clear his name, and find out who is behind the conspiracy.

The sheer amount of weapons in Dead Rising 2 make for a different and unique experience each and every time you play the game.  Whether you like blasting through enemies with guns or explosives, or would rather beat your zombie foes into submission with a purple stuffed animal, you have got some serious options when it comes down to it in Dead Rising 2.  On top of the massive number of weapons, you also have unlockable combination cards which can be used to make super weapons. These weapons which are both cool to use and earn you more points when using them are probably the best part of the game.  Only problem is they don’t last forever and then it’s back to the normal stuff.

Dead Rising is a well put together game in terms of graphics.  The cutscenes look fairly decent, and with almost twice the amount of onscreen NPC’s in DR2 than DR the onscreen action looks good as well.  Even with all of the action going on 100’s of zombies and all we didn’t notice much slowdown or screen tear.  Equally well done are the menus and various interfaces throughout the game.  New tasks are sent to you by two way radio and you can easily select where you want your onscreen compass to direct you to.  The maps are clear and concise and are easily accessible, as well as your wristwatch which will tell you how much time you have to complete various objectives.  A timer is always running in Dead Rising 2 and as you progress through the game it will constantly tick down showing you just how much time you have until help arrives.  The overall presentation of Dead Rising 2 is top notch.

I told myself I wouldn’t draw comparisons between Dead Rising 2 and the Left 4 Dead series in this review but it’s hard not to. One of the many spaces where Dead Rising 2 is lacking  is in the immersion department.  Perhaps it’s the “dark humor” the game seems to try and convey, but one thing that the left 4 dead series really nailed was music.  Music that made the game that much more intense.  This is severely lacking in Dead Rising 2, and not only is it lacking, it’s the complete polar opposite.  For much of your battles with the undead in Dead Rising 2 you will be listening to elevator music.  It does little if nothing to give the player a sense of urgency when trying to complete tasks.

There are quite a few personal preference issues that I disliked about Dead Rising 2.  The first being the game’s incredibly slow pace and sluggish controls.  The first Dead Rising turned me off, just because I found it to be boring and a bit tedious.  It never really hooked me, eventhough I loved the premise of the game.  Dead Rising 2 picked up right where the first one left off in that respect.  When you couple that with a rather uninteresting story the game just bored me to tears when playing by myself.  We all know the zombie story, it’s gameplay and presentation that makes a game fun/good or not.  I just often found myself uninterested with Dead Rising 2.  I never really felt a connection between the characters and myself and what should be your main motivation, saving your daughter, was just another tedious task to perform as the real fun to be had was creating the weapons and hacking up zombies.  It’s hard to tell where Dead Rising 2 went wrong with me, perhaps it’s that I am a big L4D fan.   They are two different games, one does a great job of immersing you in the world in dire conditions, the other not so much.  In the end I think the combination of never really having any emotional attachment to the game and the again tedious gameplay made for my experience with the game a dull one.

From the moment that you turn on Dead Rising 2 and begin your single player campaign you can tell something is just a tad off.  Controls feel unnatural and the game while well conceived is poorly executed.  The story comes off as bit cheesy at times, and there are many spots in the game that leave you scratching your head in WTF moments.  Talking to NPC’s is all text based so, aside from dealing with zombies coming at you, you are also  holding conversations that require multiple paragraphs of reading where there is really no point in doing so.  There is no conversation tree, it’s just there for the sake of being there.  Characters that you are leading to safety will randomly shoot you in the back and in my play time I had to restart multiple missions because of this.  Loading times are a bit much also in Dead Rising 2, every new area you go to will require a loading screen, and they are often.

All in all, Dead Rising 2 isn’t a bad game.  It’s got some great graphics and if you enjoy a slower paced style of game that lacks a little in the intensity department you may very well enjoy it.  For my money however, the game got to be a little boring.  Cooperative modes I enjoyed more than single player, although I don’t see myself playing much more if any of the game.  A realistic alternative at a third of the price, I’d rather pick up the year old Left 4 Dead 2, or even the two year old Left 4 Dead and the DLC’s to get my zombie killing fix.  Eventhough there’s a ton of stuff to do and see in Dead Rising 2 it kind of fell short of the high expectations I had for the title.