The latest news in the world of video games at Attack of the Fanboy
August 16th, 2014 by William Schwartz 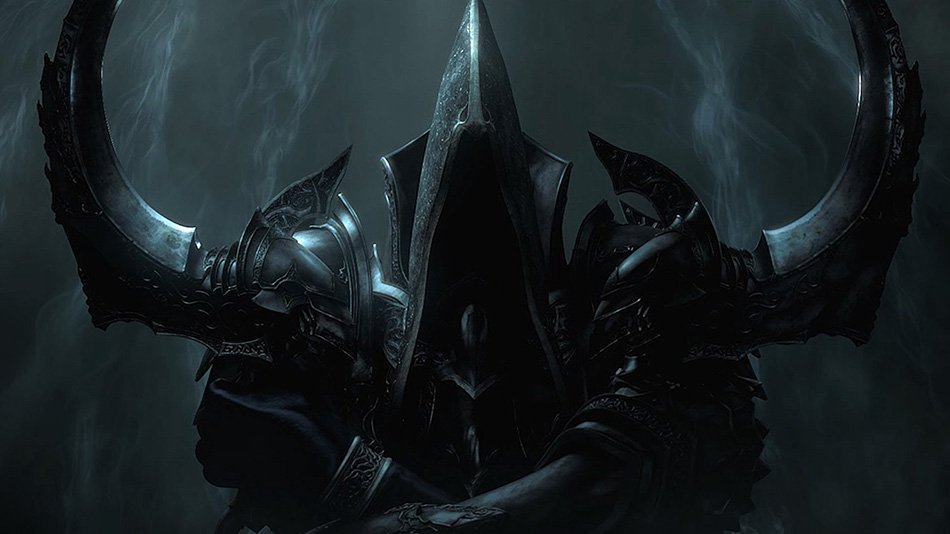 I still stand by a lot of what I said about Diablo III when it arrived on the Xbox 360 and PlayStation 3 last year, despite it being an entirely different game from the one soon to be released.  I still firmly believe that the PC is the best place to play Diablo III, but a combination of changes made to the PC the game in the last year, which were carried over to consoles, the enhanced visuals afforded by the PlayStation 4 (and Xbox One), and a wealth of social connectivity and cooperative features are making it a much closer call this time around.

While it was and still is a far cry from the PC experience, this loot focused isometric dungeon crawler does a lot of things right on the new consoles.  Most noticeably, the visuals are much sharper, the game runs much smoother, and load times are non-existent.  All of the streamlined console features introduced last year make their return, but in that process, it takes away a lot of the inventory management and mathematics that Diablo III on PC relies on.  It’s harder to build out your character in the exact ways you want as menus are clumsily cluttered and layered on the console version.  Items are harder to peruse, and players will instead rely on simple up down arrows for advice on whether to junk or keep the loot that they find. In exchange, the Ultimate Evil Edition is smattered with content that plays to the strength of consoles. Local cooperative features, a focus on multiplayer, and other additions make Diablo III: Reaper of Souls Ultimate Evil Edition a pretty damn good version of the game. 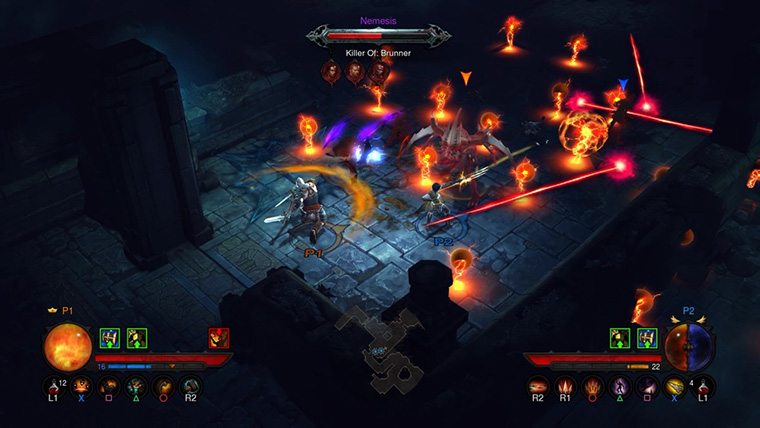 There aren’t many dungeon crawlers as good as Blizzard’s own, and sparse as it may be, the console landscape is populated with those looking to capture the spirit of Diablo.  Even with its faults, Diablo III is an immensely popular game on PC.  It’s got fantastic graphics and a wonderful presentation package.  Recent changes to the game on PC have started to bring back even those players who were turned off by the online auction house mechanic, and their reward is endless amounts of loot to uncover.  Last year, console players got a glimpse of the future for Diablo III.  A game that no longer relied on the auction house, and would instead turn to loot as its savior.  And save the game it did.  With Reaper of Souls, the introduction of Loot 2.0, and a system of end game content called Adventure Mode and Rifts, Diablo III is a different game than the console version launched last year, and even further away from the PC version that launched in 2012.

With a heavy focus on high-end loot, new modes, new characters, and a brand new act in a distinct new location, Diablo III: Reaper of Souls took a big step forward on PC.  Very shortly, the game will be taking this same step forward on consoles.  Despite how big a step forward Reaper of Souls is for Diablo III on every platform, this is a PC game that has been retrofitted for consoles.  Anyone coming from PC to the console version is going to feel somewhat claustrophobic.  And while there are still many differences between Diablo III on PC and on consoles, the Xbox One and PS4 versions are likely to bridge the visual gap that was evident on the Xbox 360 and PS3 versions.  Higher resolution makes for a less drastic difference when examining Diablo’s native platforms and its new homes, and makes that transition less jarring.  Bottom Line, Diablo III on PlayStation 4 is a significant leap over the previous console versions.

The hooks are there.  Diablo III: Reaper of Soul Ultimate Evil Edition is a game that banks on the probability that you’ll keep grinding through it for better gear.  It’s a five act campaign (Act V being the expansion content) that constantly tests you to better your character. Whether that’s by unlocking new skills and abilities, or trying new gear and combinations of it.  There’s always something to tweak, something to try and make your character just a little bit better.  It’s a thinking person’s button masher, but a button masher once you’ve come up with a system of abilities that you enjoy using, nonetheless.   It’s a top down game that throws endless amounts of enemies at you, and will reward you for slaying the biggest and smallest of them. You never know what these enemies will drop, it could the best piece of equipment that you ever find, it could be worthless. 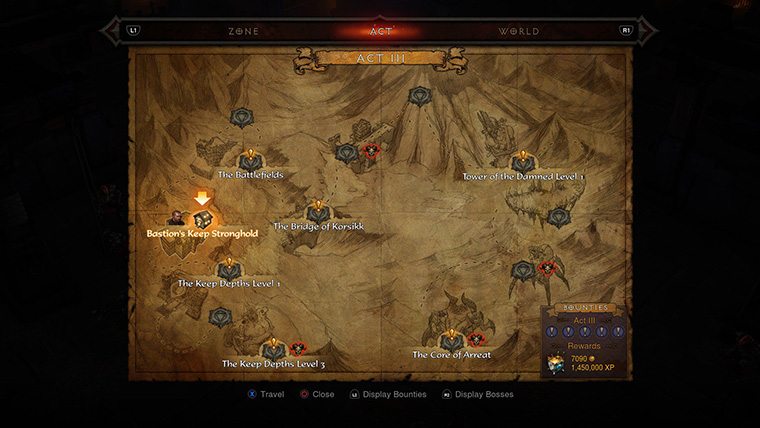 The five act story will take you to a number of different parts of Sanctuary, and each act has a distinct design to its levels, dungeons, and monsters.  You’ll meet a cast of characters on your way to battle Diablo, as well as meet a wide variety of color coordinated enemies ranging from lowly grunts to champion elites and everything in between. As the story unfolds you’ll meet a number of bosses as well, which further the story along, but Blizzard’s storytelling isn’t the real star of the show. It is in fact the systems behind the scenes, the tiered difficulty levels to tackle the game on, the adventure mode rewards, cooperative play, mastering multiple characters, and the many ways to play the game, that are the things that keep you coming back for more.

Excluding the new modes, Reaper of Souls is essentially a single act which allows players to raise their level cap to 70. The fifth act of the Diablo III campaign, one that takes place after the events of Act IV. It allows players to explore Westmarch, and its one of the most gloomy yet beautiful locations that Blizzard has offered up to date. A combination of new unique enemies, a few new scenarios, and a notch higher in difficulty, Act V might be the best of the bunch. Though its inclusion in the established timeline of vanilla Diablo III is executed with less polish than the act’s functional design. Act V introduces a new villain, Malthael the Reaper of Souls. It’s a bid to end the ongoing conflict between angels and demons, but unfortunately Malthael himself only shows up a handful of times in the act. Such a cool villain, it would have been nice to have seen this imposing character put to use more often.

The addition of Act V also brings about the introduction of The Crusader. A brand new Holy Warrior class who’s feels like a Barbarian with some additional ranged attacks. This means the Crusader is very versatile, and can be used in a number of situations. The hero can take heavy damage, blocking or reflecting much of it, can heal allies, and then unleash holy magical attacks. The Crusader is an awesome addition to the Diablo III line-up of heroes, and definitely worth another play-through with. 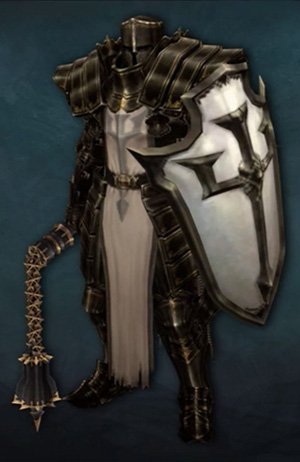 The Crusader is a versatile new Holy Warrior

Alongside The Crusader, Blizzard gets it explicitly right with Adventure Mode, it’s the other big feature of Reaper of Souls. It’s the mode that keeps you playing after the final credits roll. If increased difficulty isn’t your thing, Adventure Mode will keep you busy while your stockpiling your courage for a hardcore, master, and torment modes. It’s something that a lot of Diablo III players have been asking for, if not specifically — something to keep them playing outside of re-playing the campaign. Adventure Mode is it, but you will need to have completed the campaign to access the mode. Once you do, you’ll be able to go anywhere and tackle any objectives across Sanctuary, collecting Rift Fragments by doing different bounties. You’ll earn special loot, encounter new dungeons, and you can do it all in bite-sized portions. There’s new special loot to unlock with collectible shards, and its just a mode that really feels fresh, regardless of how many times you’ve completed the campaign.

So what makes Diablo III: Reaper of Souls Ultimate Evil Edition stand out on consoles?  Well, obviously there’s the content that was mentioned above, but there’s also quite a few console-specific features in Blizzard’s latest.  Local cooperative play returns.  Which means you and friends can wage war against demons side by side if online isn’t your thing.  Up to four players can play cooperative play whether online or not.  An interesting aspect of the console version is also in how loot is divvied up.  Each player will get their own custom loot drops in co-op mode, so there’s no fighting or rolling for the goods. Players can also freely exchange goods through Player Mail, this allows Ultimate Evil Edition players the ability to send gold, materials, and other items to anyone on your friends list. There’s also a “Nemesis System” which is exclusive to consoles, and it’s an interesting take on connecting player game worlds, even when players aren’t connected to each other in an online match.  For instance, when a player is killed by a random enemy in a single player game, there’s a chance that this enemy will level up, become a “Nemesis” monster, and then go hunting players on your friends list.  These Nemesis monsters can be identified by their names, and you’ll see them visibily hop through a portal into your game world. If one of your friends happens to kill this Nemesis monster, both you and the player who made the kill will be rewarded with a special loot drop.

The cooperative aspects of Diablo III: Reaper of Souls Ultimate Evil Edition are some of the best we’ve seen to date on both the online and offline fronts.  They’ve made it extremely easy to hop in and play with friends regardless of levels.  The loot drops are spot on, and there’s never a jarring experience of trying to play when friends are on different levels from one another. Diablo III shines on consoles as a connected experience, and in many ways it’s a better game on consoles because of these aspects and refinements to the gameplay and ways to play. 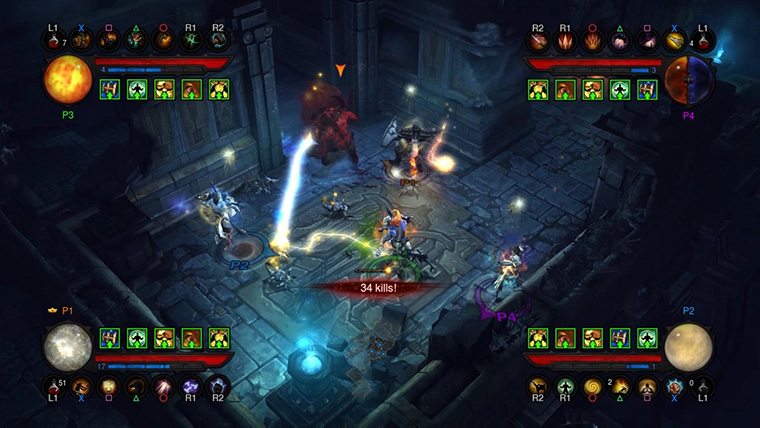 Blizzard has put a lot of work into Diablo III in the last two years. The game has seen a number of improvements on the PC, and these have carried over to the consoles. This synergy between the games makes it a far less jarring transition for those who have put time into the PC version of the game. For those who only know the console version, Ultimate Evil Edition is a significant upgrade to the console version released last year. It’s unfortunate that those versions of the game won’t see the updates that PC players get, and instead will need to fork out for a full priced release with no upgrade path for previous owners of the game. The price of admission is indeed worth it when looking at the incredible replay value that a game like Diablo III holds. Diablo III: Reaper of Souls Ultimate Evil Edition might not be the best version of the game available, but it’s the best one you can play using a controller on your couch.