Set to launch for both current-gen and next-gen platforms. The Dirt series has been around for a number of years now, even way before it had the Dirt name attached to it. Once known as the Colin McRae Rally series, Codemasters changed to the Dirt moniker beginning in 2007 and has not looked back since. Including a few spinoffs like the Rally games, there has been a new Dirt game every few years for awhile now. Now on the heels of the next generation consoles releasing, Codemasters has returned to the mainline series with the release of Dirt 5.

The Dirt franchise focuses on off-road racing with a few different types of racing available to you in the game. This includes not just regular off-road racing on dirt tracks, but also things like racing on ice and in off-road buggies. Dirt as a series has always been known for being rather difficult when compared to more casual racing series. This is made even harder when you are thrown right into a race as soon as the game starts without any tips for how to play or anything. As a result, you will have to sort of learn on the fly as you are playing, which you should get the hang of before too long. The game does have difficulty options to choose from if you are really struggling though. 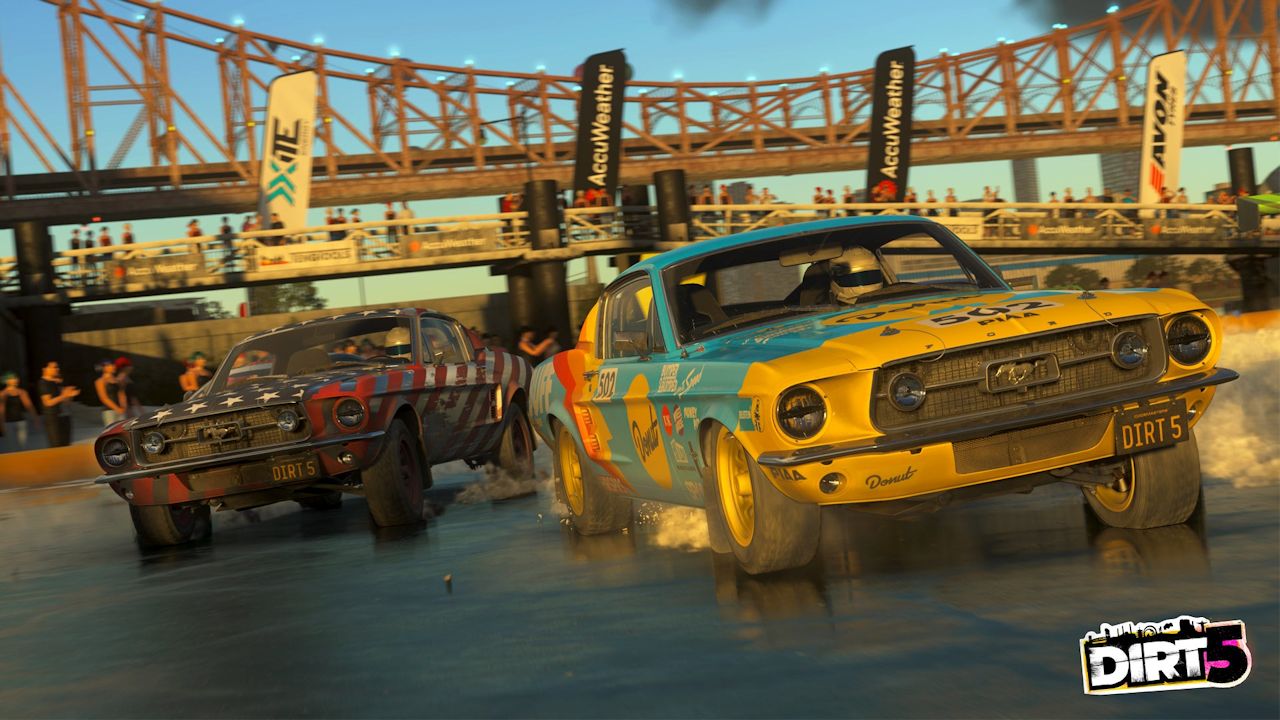 Driving in Dirt 5 is pretty much what you would expect from this type of racer control wise, with the ability to accelerate, brake, drift, and more. Codemasters has a pedigree for designing excellent racers from a driving perspective and this game continues that with excellent and precise handling that differs depending on the type of vehicle you are using. Making your way around curves and not spinning out is something you have to learn to time correctly and failure to do so will almost always be as a result of your own mistake rather than anything the game offers. As Codemasters has come to be known for, the game is about as technically perfect when it comes to driving as you can get.

Dirt 5 also comes with two different video options available to you, which let you choose whether to prioritize image quality or frame rate. This may only be an option on premium consoles like the PS4 Pro, as that is what we played the game on. Focusing on framerate allows you to play the game at 60Hz, while focusing on image quality takes it down to 30Hz. It is great to have this option on the current-gen option, with the promise of even better performance on the next-gen version that will be a free upgrade.

Speaking of the image quality, Dirt 5 does look quite good as you’re racing through the various environments available to you in the game. It still doesn’t look quite as good as say Forza Horizon 4, but it still looks very good regardless. This is especially the case with the dynamic weather system in the game, which is dependent on the seasons. The water effects as you splash through puddles on the track still look as great as they did in the previous game, along with the beautiful winter settings that really stand out. The game also has fantastic sound effects and a great soundtrack of songs to accompany the various areas of the game as well. There is plenty to be found in Dirt 5, as there are multiple different game modes to keep you busy. The most fully fledged of these modes is definitely Career, which is pretty standard for a racing game career mode. You start off by catching the attention of a veteran driver voiced by Troy Baker, who helps mentor you on your journey. This mode begins by giving you events to complete, with more being unlocked the more you finish. There is not just one set path for you to go down either, as you get to choose as you’re playing based on the races you participate in. Career mode does start a little slow before it really ramps it up into high gear with the many more race options and locations for you to enjoy.

Each race also has objectives for you to complete, which are split into Career Objectives and Event Objectives. Completing objectives will give you Stamps that you will need to collect to unlock further events in the career mode. These Event Objectives are not even always the same either, as you can reroll them to do other objectives. This not only gives you plenty more to do, but also helps with earning additional XP, Rep, and Dirt Dollars. Once you reach the end of a path, you will reach one of the Main Event races, which will require a certain number of the aforementioned Stamps to access. You will also unlock what are known as Throwdowns along the way by completing specific tasks in career, which will put you up against one other driver in a mano a mano match-up.

It wouldn’t be a racing game like this without the ability to sign up with different sponsors. While you start off with just Codemasters as your sponsor, you have the opportunity to change eventually. These sponsors differ in things such as race payout, bonuses, and more, so there’s some perks to having certain sponsors. While it does allow you to switch sponsors at anytime, changing will reset your Rep that you have earned. As a result, this is something you don’t want to continually be doing. For those that would rather just race without a story surrounding it, the game’s Arcade mode is just for you. Within Arcade, you can choose between Free Play and Time Trial, which let you try for your best times across the various tracks in the game. If you’re not feeling enough challenge playing against the AI, you can also move onto the multiplayer aspects in the game, which are available in two different ways.

The first of these is to play with other friends locally, as Dirt 5 has reintroduced up to four player split-screen multiplayer to the series. This makes the game a lot more enticing to play when with a group than ever before. If you are only playing alone and are tired of the single player options, you can also take the game online to play with friends or others. The options here are to participate in regular races or through party games that can be a lot of fun. The actual arena creator itself is pretty simple at its core, though you can make some really complicated arenas if you really try. None of the arena options are exactly huge, so you are only limited by what you can fit within the existing arenas that you can choose from. The general setup of the creator is to open the Object Browser to select and item and then place it in the arena. There are many layers to the Object Browser too, which you can scroll through for different types of objects. For those that lack creativity or the patience to build an arena, you can also download plenty of different ones that others have created online as well and play them instead.

Codemasters’ Dirt franchise has been one of the most consistent racers across the last few console generations and Dirt 5 keeps that trend going. The driving itself is as you have come to expect from the series to this point, which is about as good as it gets with tight controls as you race for first place. Beyond the gameplay, Dirt 5 has an abundance of content to keep you entertained across various game modes that makes the game one of the best in the series to date.

Even with an enhanced version on the horizon that includes 120 fps with the arrival of next generation consoles, Dirt 5 delivers a fantastic off-road racing experience full of content that will keep you busy not only on the track, but also off with the addition of the new Playgrounds arena editor. Considering there is a free upgrade to the next-gen version as well, there is no reason not to go ahead and pick this one up if you were at all interested, especially if you are a fan of the franchise.