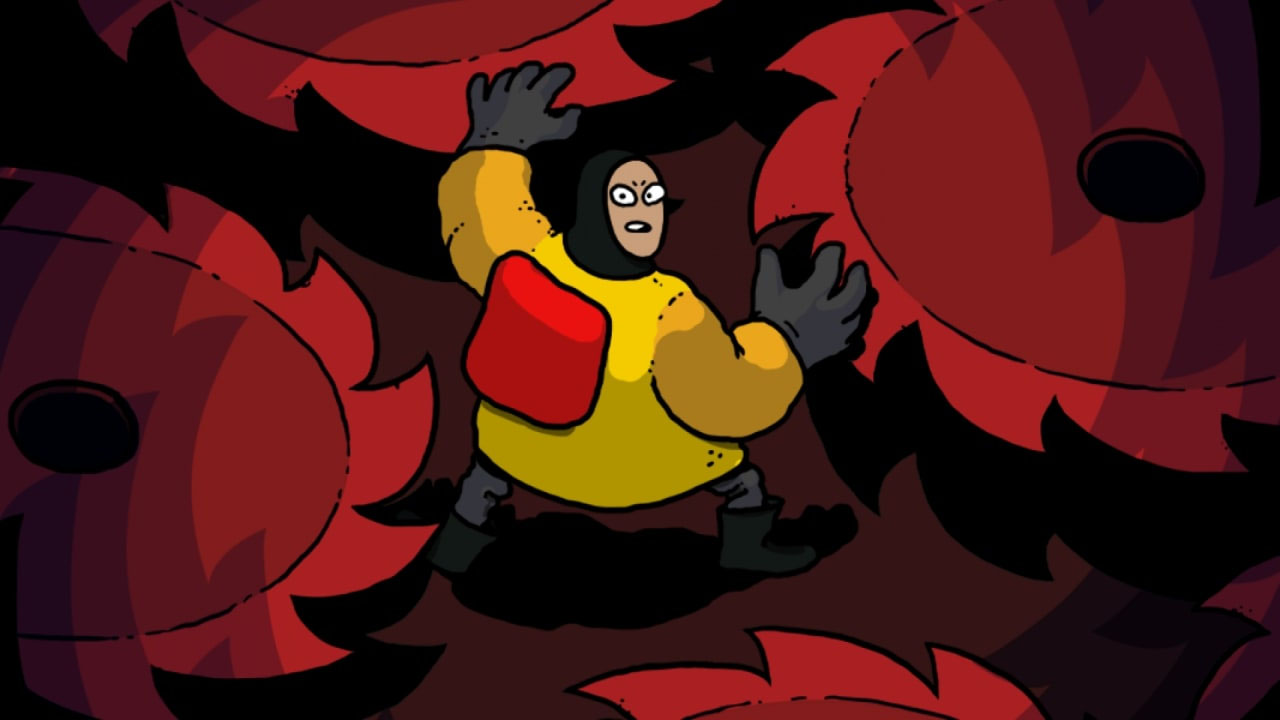 The indie game scene has a propensity to have really difficult games that will challenge your reflexes, with games like Super Meat Boy and the like. Devolver Digital’s latest has a bit of an interesting backstory, as it is actually a somewhat remake of an old Humble Bundle game. Now a few years later, developers Kitty Calis, Jan Willem Nijman, Terri Vellmann and Doseone have collaborated to create what is still known as Disc Room.

Disc Room is essentially a dungeon crawler in a sense, as you make your way room to room until you reach the very end. You won’t be battling monsters and collecting loot along the way though, besides four boss battles, as your goal in this game is to just stay alive for periods of time. As you enter each room, they have doors within them that you need to open by completing certain tasks. This may be something simple as staying alive for five seconds or something much more involved like defeating the four Gatekeepers found in the game. 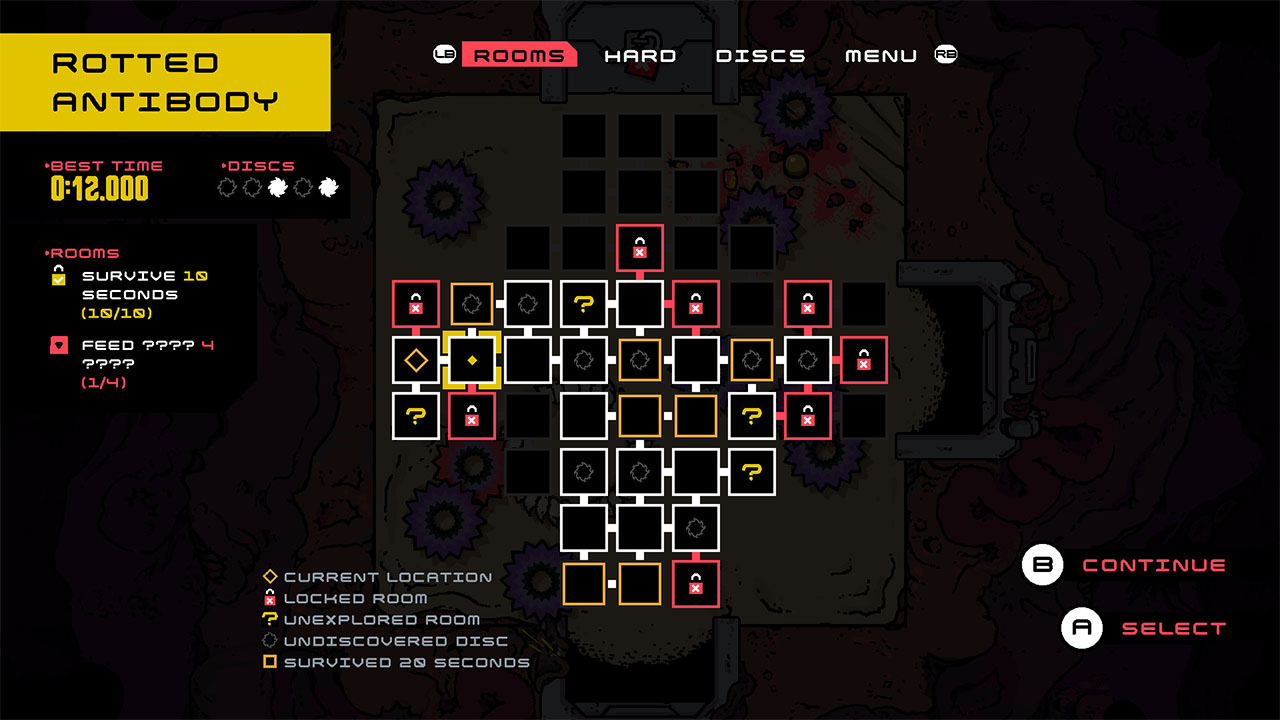 There isn’t too much story to be found here, as the game is set in 2089 when a giant disc has appeared in the orbit of Jupiter. This leads you to go to this disc to explore, which leads to the aforementioned dungeon crawler like structure of the game as you check it out. This minimal story is told by occasional comic panels that include no text or voices, which is pretty fitting for the overall aesthetic of the game.

The controls found in Disc Room are very easy to learn, as you are pretty much just controlling your character with the left analog stick as you are dodging blades throughout each room from a top-down perspective. When playing on PC, you have the option to play with either the keyboard or with a controller. With the fast paced nature and precise motions required, you will almost absolutely want to use a controller. This is because it would be near impossible to survive some of the toughest levels in the game without the use of an analog stick to make it through tight quarters.

You will also come across six power-ups during your journey, with all but one of them being ones you should come across just by playing. The only problem here is that all but two of them are essentially useless most of the time outside of a very rare exception or two. Dash and Slow are the two you will find great use out of here, as Dash lets you move right through a blade without taking damage, while Slow lets you slow down time temporarily to give yourself time to think in tense situations. The other ones like Absorb and Mirror just really aren’t that useful and each subsequent power-up was a big letdown after how helpful the first two were. 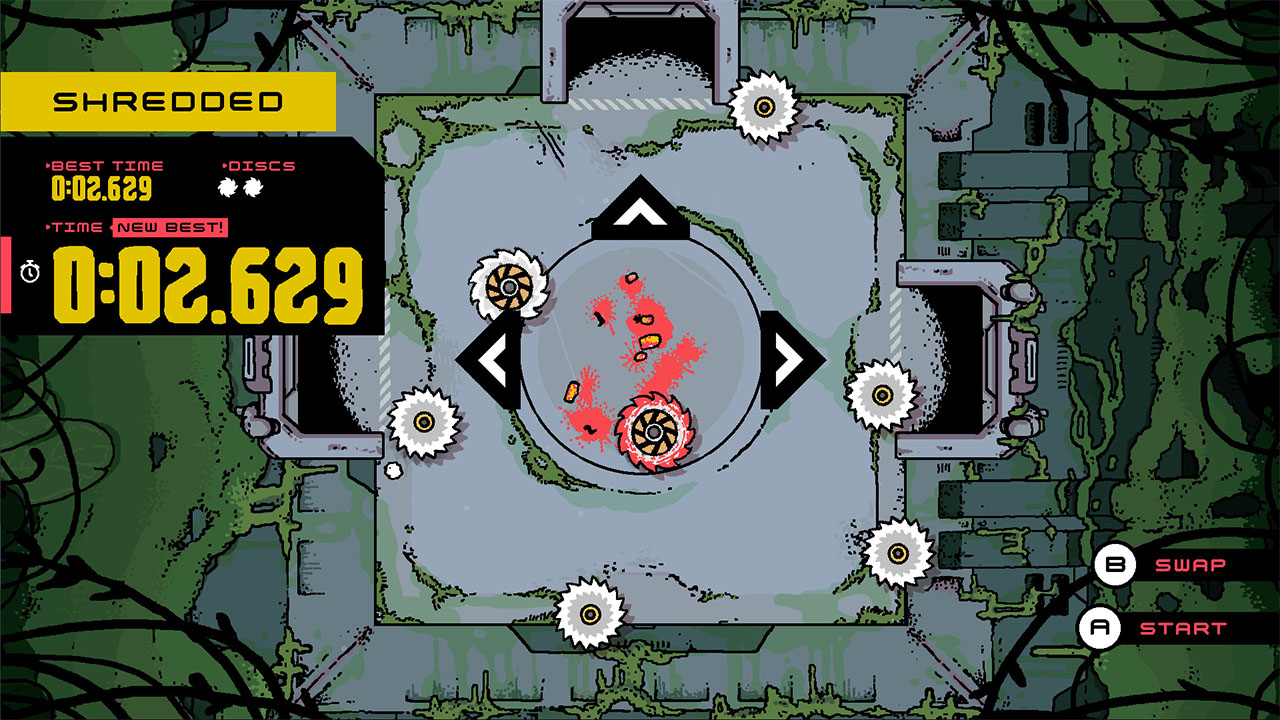 The game is split into five separate zones as they are known in the game, with all of them having a theme for how the gameplay is within each one. The first one is basic where time flows normally and you just need to avoid getting hit. The next zone adds a layer of difficulty, as the time only increases when you are in the center ring, which is much easier said than done as you dodge the blades coming after you. Another zone is colored entirely red and gives you only a small area of light around you that keeps cutting out. The clock does move normally here, but it’s much harder to stay alive due to the light going out constantly. The final of the initial four zones has you collecting brown pellets throughout the stage that increase the time for each one you grab.

Each of these first four zones also have a boss fight for you to complete that mix in the respective gameplay of each area. These can be rather difficult and likely will take you multiple tries as you get deeper. Defeating all four will eventually lead you to the final zone, where the timer is only increased by stepping on every space in the arena while dodging countless blades. This all leads to the Ultimate Gatekeeper, which makes the previous four bosses look like a cake walk. By having the varying zones in the game, this helps to keep the game fresh, even with the basic gameplay being the same for the most part.

After beating the game and seeing the credits roll though, your adventure is far from over. This is where Hard Mode is unlocked, which isn’t just a replay of the original stages. You start from the end and make your way back to the beginning, but the stages themselves are completely different from before, though they still maintain the same zone themes throughout. Some of these begin to reach the level of being almost unfair and is where the real frustration comes into play. The final stage in Hard Mode in particular is the most difficult by far and easily should cause you the most trouble, which makes that second credit roll all the more satisfying when you beat it. 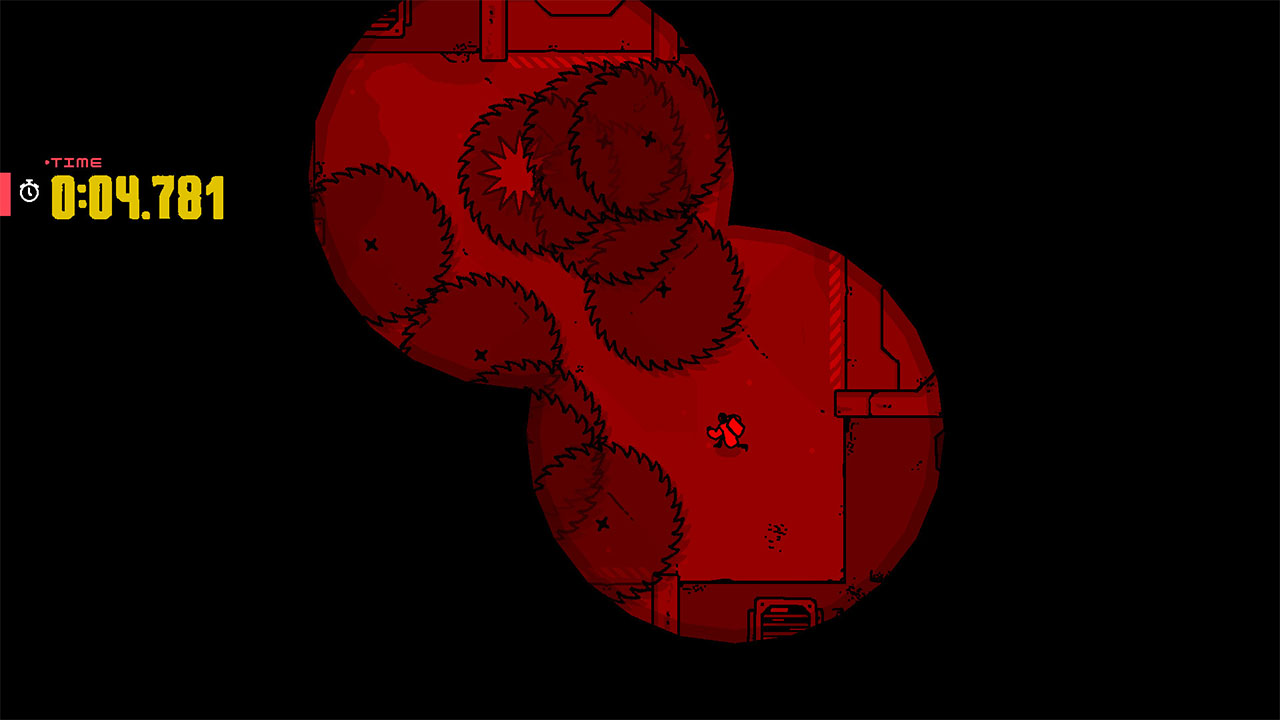 The overall difficulty in Disc Room may be a problem for some people, as it can get a little too frustrating due to the random nature of the game. You can get a general feel for how some of the stages are setup, including with the bosses, but most of them have no set pattern and will many times rely on luck to survive. Sometimes it can just feel unfair when you get trapped due to how the room shakes out that time. Thankfully, you can immediately start back with no load times if you are truly glutton for punishment. In addition, there are some difficulty options in the menu where you can slow down the game and adjust the goal difficulties, but that really does take the fun out of what is designed to be a very difficult game.

Disc Room is not for the faint of heart, as the overall frustration level may make your blood boil at times. However, the gameplay is solid and can get addicting very quickly. While the game can be rather short and the power-ups are pretty disappointing overall, Disc Room is definitely at least worth a look for those wanting a real challenge.

Being a game that will no doubt test your reflexes and tenacity, Disc Room will make the number of deaths you have in a Dark Souls game look miniscule in comparison.