Another excellent platformer from the makers of Runbow 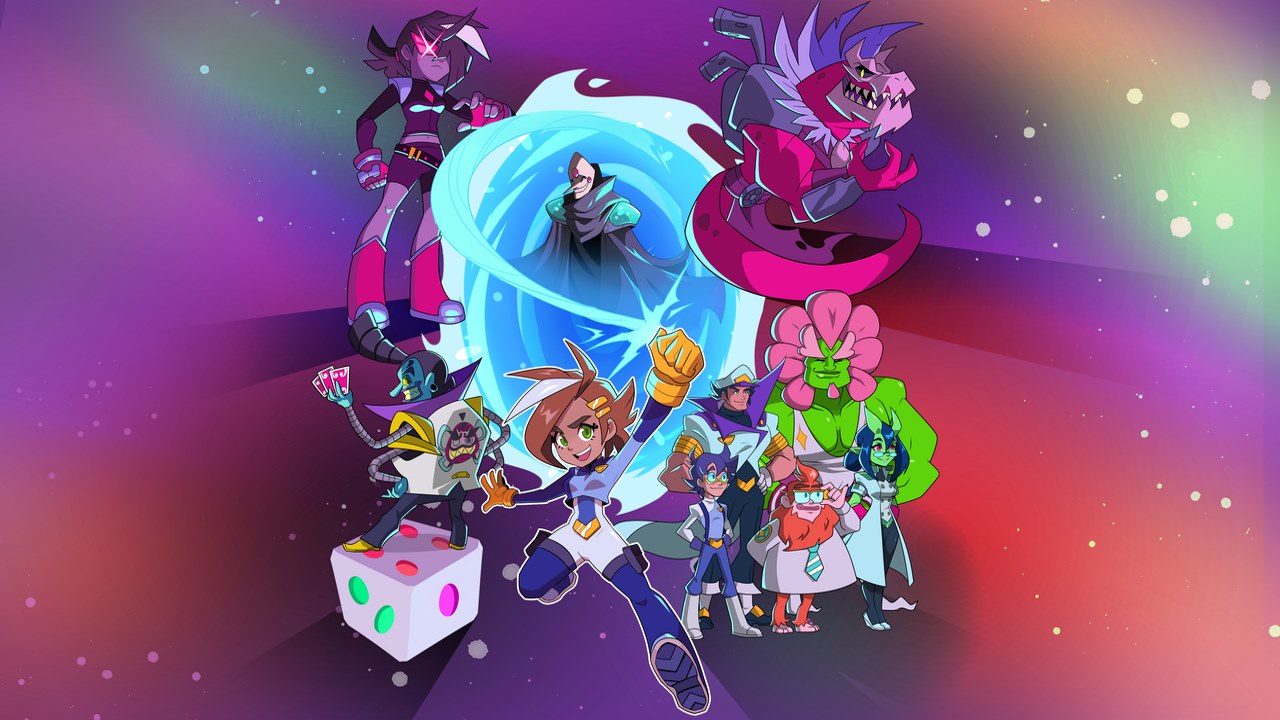 Runbow surprised everyone with its unique take on 2D platforming back in 2015, eventually making its way to multiple platforms to great success. 13AM Games, the team behind that indie darling, are now back with another fresh experience within the genre. Shifting its focus toward single player, Double Cross offers players a tight campaign full of intriguing platforming design. Layer on a story full of colorful characters and you have another recipe for success, with only a few elements dragging it down.

Double Cross places you in the shoes of an interdimensional police officer. You play as Zohra, a member of R.I.F.T. (Regulators of Interdimensional Frontiers and Technology), which is an organization dedicated to keeping bad actors from messing with the space-time continuum. After a direct attack on R.I.F.T. the real question is, who is the traitor? To find out you will have to jump, swing, and fight your way through a series of non-linear stages with plenty of unlockables and upgrades.

Double Cross actually puts a lot of effort into its story. While this isn’t always for the best, with walls of text awaiting the player around some corners, the effort is certainly appreciated. The game crafts an intriguing world to explore, with very engrossing characters that serve as your window into it. You’ll actually want to chat with them too, as they will have new dialogue all the time, some have their own side stories, and you need to chat and share evidence to solve the overarching case of who has betrayed R.I.F.T. So while the story can get in the way of the fun, it’s worth the time it takes and offers more than the asking price seems to indicate. 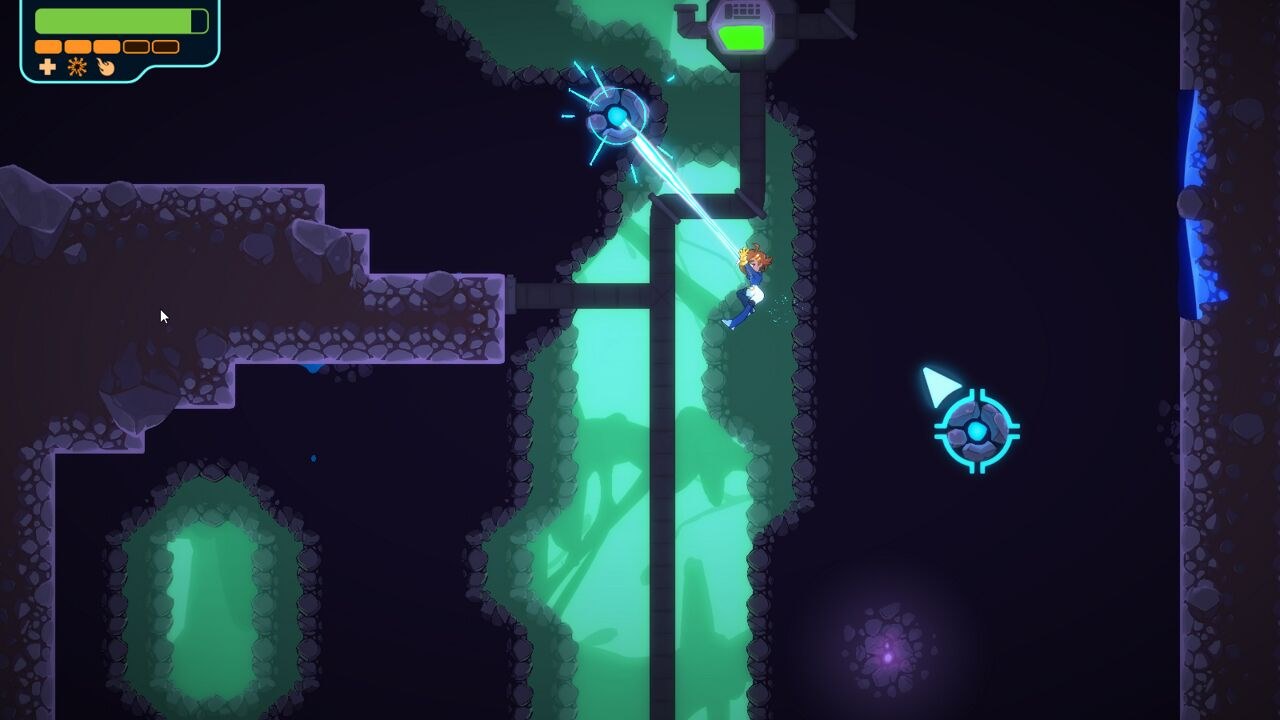 However, the true star of Double Cross is its stellar platforming. Featuring a set of moves that are quickly taught at the beginning of the game, players will utilize these skills to traverse very well designed levels full of enemies and traps. The signature maneuver in Double Cross is Zohra’s grapple technique. What starts as a simple way to propel you in different directions quickly shows itself to be a deep and rich environment for play and experimentation. This grapple is used in many different ways, and presents very interesting challenges and strategies throughout the game.

The true star of Double Cross is its stellar platforming

Beyond that, the moveset is a bit more limited, with simple fighting mechanics along with a dodge roll and the usual platforming staples. Upgrades and individual level mechanics do add some variety, but overall players will find themselves performing a lot of similar actions as they make their way through Double Cross’ well designed levels. Enemy variety is also slim, with each new zone presenting a set of foes that won’t change much from beginning to end. There’s the usual color-swapped tougher variants, but not much else. Thankfully the few types of enemies that are there are unique enough that you always have to stay on your feet with the tactics used against them.

I’ve brought up how well these levels were put together a few times and that’s because they truly are. The platforming within Double Cross is always great and is at-times fantastic. Blissfully developed sections offer true challenge with some really great ideas expressed through the adventure. The only thing that puts any sort of damper on the platforming is when large chunks go without a checkpoint. Some of these include timed enemy waves, or switch flipping, which will become very frustrating after a failure or two. These times are rare though, so for raw platforming fun you can’t go wrong with Double Cross. 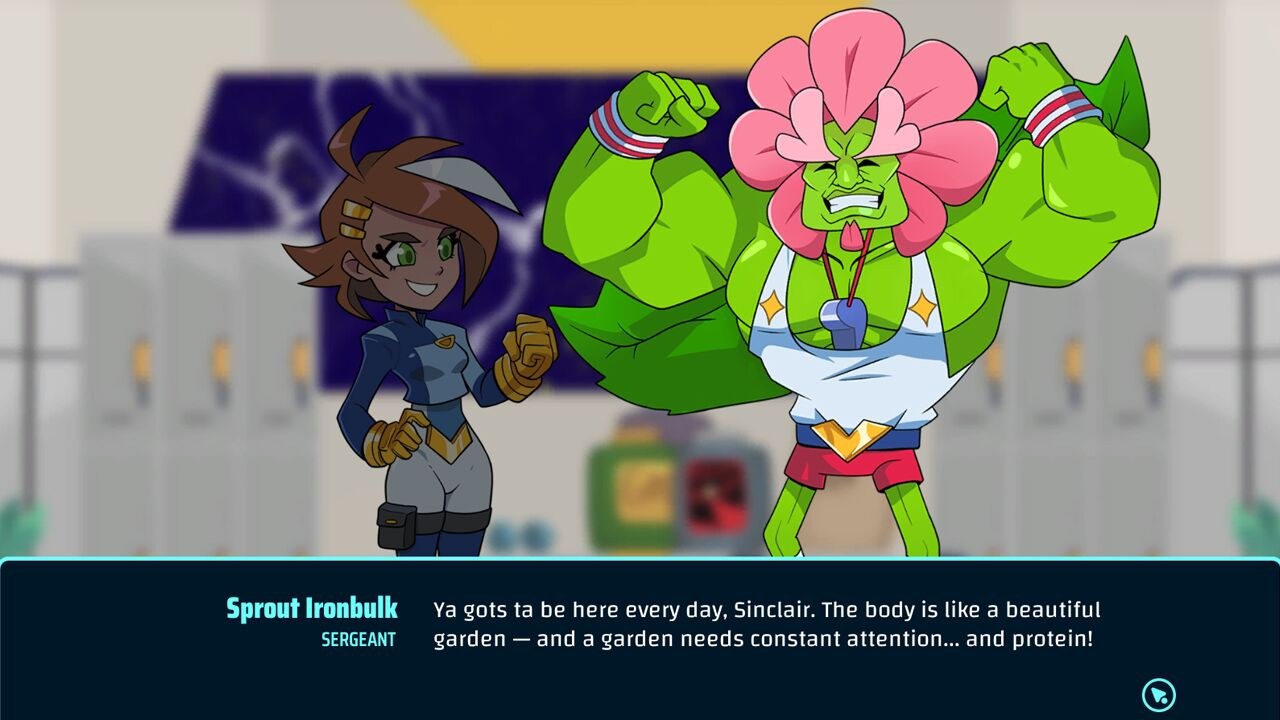 However, while the stages are put together to offer great gameplay, they fall short in terms of visuals. Levels aren’t really crafted to look natural or beautiful. Platforms will almost universally be presented as simple lines on the screen, with flavor art around or on top of them. What makes this more stark is how much it conflicts with the excellent character designs, which are interesting, colorful, and complex. Unfortunately, those character designs don’t impress as much when in motion.

Animation in Double Cross is rather simple and repetitive. Combine this with the simple level art and the overall visual presentation is shaky. Solid character designs only get you so far if they don’t look good in motion and are navigating bland stages. Given the lower price point, none of these are deal breakers, but don’t expect the second coming of Ori and the Blind Forest here in terms of visual design.

Double Cross is far more than the sum of its parts, resulting in a great smaller platforming adventure. The universe is cool, the story is decent, the characters are colorful and interesting, but it all comes down to the platforming action. Utilizing a singular mechanic in Zohra’s grapple, expanding on its many uses as you move through the game, players will find some really cool design choices throughout their time with Double Cross. New elements are added sparingly and then used just enough to explore their use and no more. With some better combat choices and animation this could have been a revolutionary release from 13AM Games, but even without that lofty goal it’s a definite safe buy for anyone wanting a great new platformer.