The latest news in the world of video games at Attack of the Fanboy
April 1st, 2015 by AOTF Staff 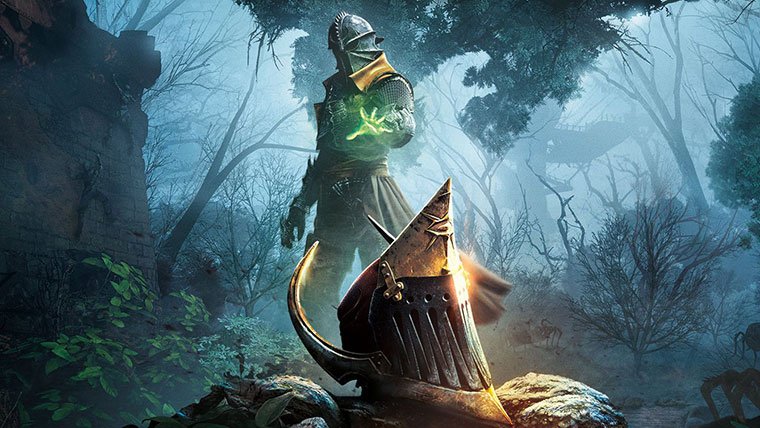 Months have passed since my Inquisitor put on his battle helm and ventured out past the walls of Skyhold, but finally something is calling him back to action. Dragon Age: Inquisition’s Jaws of Hakkon DLC is looking to take our personalized leaders out of retirement (assuming you ever stopped playing) and send them off to a new area of southern Thedas where mysteries need solving and evil needs squashing. The Inquisitor before you, Ameridan, went missing in Frostback Basin around 800 years ago and that inexplicable disappearance serves as the driving force for this expedition. Unsurprisingly, uncovering the truth puts the current-day Inquisition in contact with a slew of new faces, primarily the Avvar and Hakkonites. So the Inquisition does what it does best: forge alliances and restore order.

The setting of Jaws of Hakkon, Frostback Basin, is the first immediately striking aspect of the DLC. The environment may not seem all that large at first, but it reveals its true size in its verticality, something not often seen in the main game. It’s filled with dangerous cliffside walkways, deep valleys, murky swamps teeming with twisted tree trunks, and the ever-impressive Avvar-occupied Stone-Bear Hold. Each zone is able to easily differentiate itself from the last by engaging the viewer with vibrant and mood-appropriate tones, lending distinct personalities to the landmarks discovered. It’s a visual marvel most times and one that reminds us of the captivating worlds BioWare is capable of whipping up. 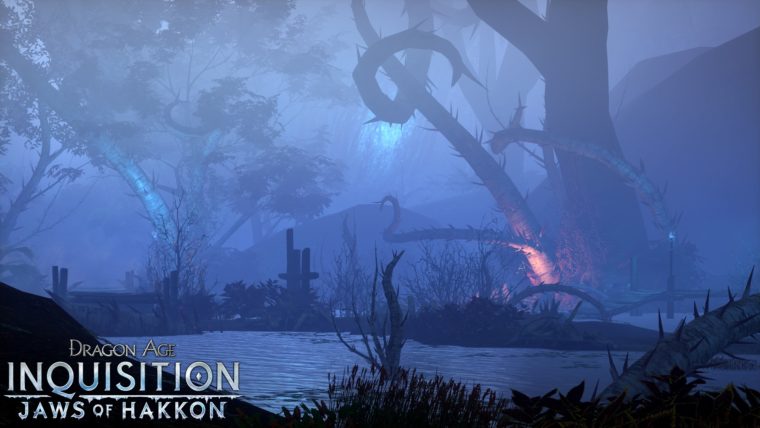 The assorted eye candy helps alleviate an issue with Jaws of Hakkon: it’s a lot of the same. Is being the same necessarily a bad thing? Not at all. Hell, I awarded the game a perfect score last year. More of the same is great, but at the same time expectations were high going into the content. The desire was for something new and, in some ways, it satisfies. But the add-on adventure’s reliance on old quest styles (I’m looking at you, fetch quests) and enemy archetypes meant that Jaws of Hakkon did little to stand out from my previous 50+ hours with Dragon Age: Inquisition in terms of gameplay. The bigger offender of the two is arguably the enemies scattered throughout Frostback Basin. Whatever tactics you used throughout the countless hours of the main campaign are most likely to be endlessly recycled, to an extent, through the several hour journey here.

I say “to an extent” because Jaws of Hakkon is aimed at higher leveled players. We’re talking 20+. This means the difficulty has been noticeably increased. So while the encounters may be more or less the same, the intensity has definitely been revitalized. Given the paltry offering of formidable foes (outside of dragons) post-game, my Inquisitor had clearly grown an ego regarding his battle competence. The Hakkonites were quick to humble him. Even though there wasn’t much out of the norm in regards to the way battles played out, it was refreshing to return to a more vulnerable state. The reward for enduring and overcoming the heightened challenge came in the form of new gear. We all know how important loot is in an RPG and the new spoils here were worth taking the time to obtain. Ice-based weapons and epic armor await those that dig deep through the land of Frostback Basin. 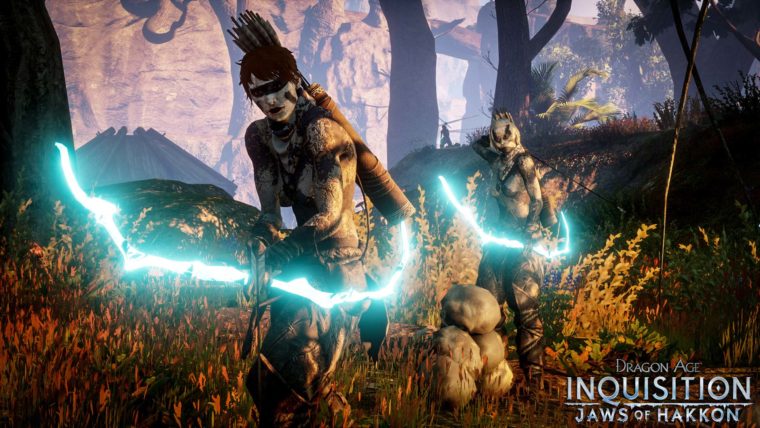 As briefly touched upon earlier, the story intertwined into all of this is one revolving around the last Inquisitor, Ameridan. As the current Inquisitor, you have taken it upon yourself to figure out what fate befell your predecessor. The narrative is intriguing enough, fleshing out more Dragon Age lore and providing a fascinating display of the tribal community of the Avvar. This means that a meat of the experience is gained by diving into the presented lore and searching for more knowledge. The more you know, the more interesting the newfound characters become. And that’s a good thing because the Inquisitor and accompanying gang get little cinematic screen time. If you’re hoping to enjoy those cutscenes that sweep the camera in close for a look at your custom crafted commander, you’ll be sorely disappointed for a majority of the game. At least the cutscenes do finally start rolling in toward the end, and an extremely satisfying conclusion to the tale follows.

Jaws of Hakkon highlights everything the main game got right, but it does little to stand out on its own and offer a truly-noteworthy quest. The evnvironments are visually attractive and diverse, the story is compelling, and battles pose a challenge. But it’s hard to fully recommend Jaws of Hakkon when it feels so non-essential. There were no unique must-have experiences tucked away within the DLC that would warrant a purchase at $15. If you’re looking for more of the same, you got it. And the target audience for Jaws of Hakkon definitely seems to be those that are dying for more of 2014’s Game of the Year with little extra tacked on outside of that award-winning formula. That being said, it is a fair start to the downloadable expeditions that await our characters. We just hope that the next time the Inquisitor is called away from the throne, it’s for a more unique and memorable experience.