Relive the journey of Goku. Easily one of the most prolific franchises ever, Dragon Ball Z has had game after game release over the years. There has been a wide range of quality differences across these releases, with arguably the best to date coming just two years ago with Dragon Ball Z FighterZ. After skipping 2019 besides Jump Force and more DLC for FighterZ, the series is back again with a brand new retelling of the story everybody knows and loves in Dragon Ball Z: Kakarot.

The Dragon Ball franchise has dipped their toes into the RPG genre a few different times over the years, with the Dragon Ball Xenoverse series being their most successful attempt. While that was more focused on an online MMO style in a way, Dragon Ball Z: Kakarot takes a different approach by being entirely single player focused, essentially being like a spiritual successor to the Legacy of Goku games on Game Boy Advance. 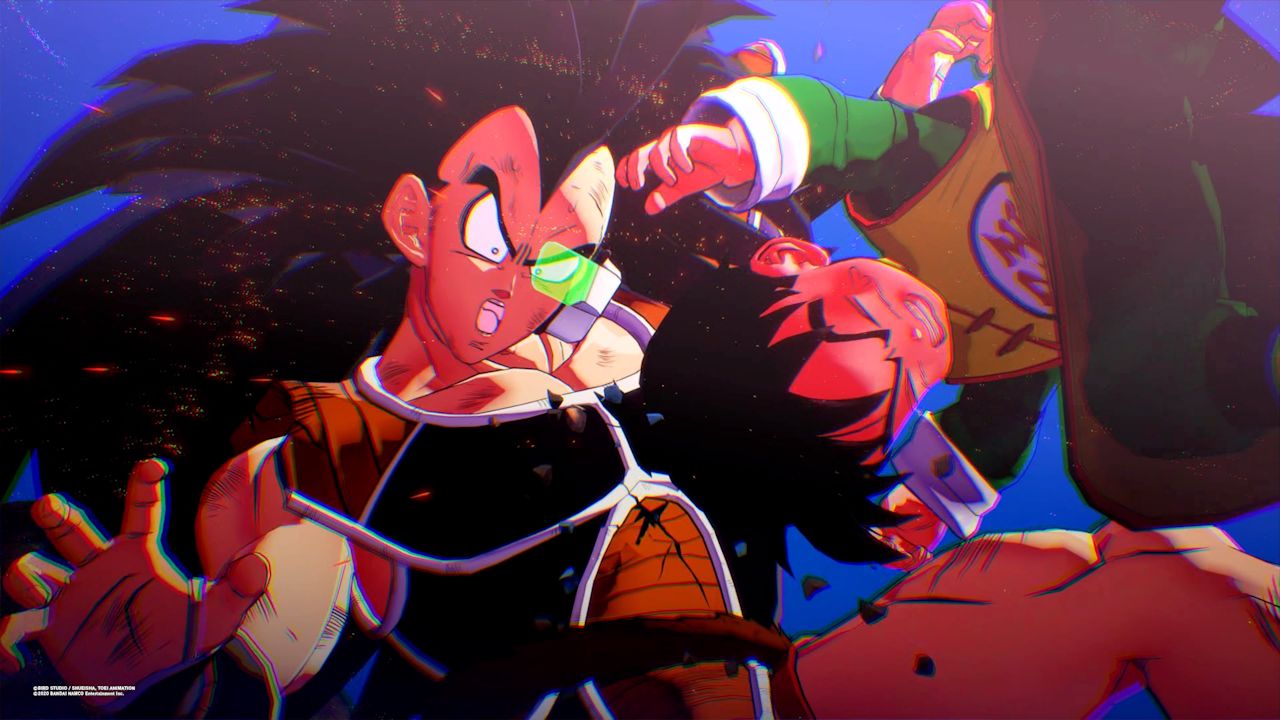 Dragon Ball Z: Kakarot spans the entirety of Dragon Ball Z, starting at the beginning of the Saiyan saga and spanning all the way through the Majin Buu saga. Filler arcs that were made just for the anime, such as Garlic Jr. and the Otherworld Tournament are left out entirely, leaving fans with four full arcs of Saiyan, Frieza, Cell, and Majin Buu. The game is setup to where each of these arcs span a good portion of the game and allow you to explore and complete sidequests along the way, while also having what are known as Intermission sections where you can catch up on what you’ve missed in the game to that point.

The story in Dragon Ball Z: Kakarot is told in a few different ways, with the best being the beautiful cutscenes showcasing the highlights of the series. From there, there are also numerous sections where the characters are standing around talking with voice acting and dialogue boxes, but no cutscenes around them. Lastly, there are also moments where you have only dialogue boxes and no voice acting outside of one liners and random phrases. The latter are used mostly for the sidequests or the exposition dumps, allowing you to fast forward through them if you would prefer.

Many people are tired of reliving the same story over and over again through the manga, anime, and countless other games in the past. While the basic outline is the same as any of those, the more open RPG nature of Dragon Ball Z: Kakarot does allow some of these moments to be fleshed out much more so than in the past. This even extends to the relationships between characters, as we see some growth of characters like Piccolo and Gohan early on that wasn’t as obviously presented in the other variations of the story. On the other hand, the game does also skip a lot of moments that could have been expanded upon, such as Goku’s time on Snake Way or his travels to Namek. Instead, the game features a lot of jumping ahead in the story, when it would have been better to let some moments breathe, even if it meant including additional intermissions to open up the game a little more. 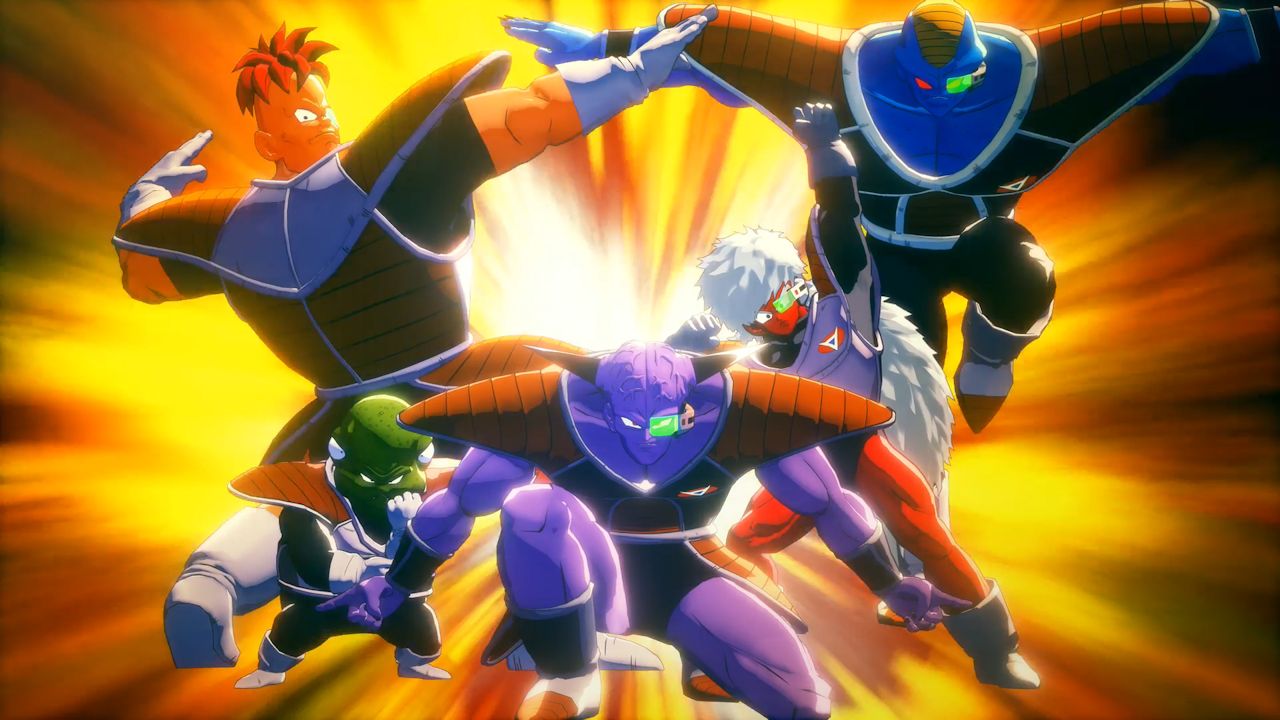 While the story does jump around a lot, people with no knowledge of the series prior still should be able to keep up with what is going on more so than most of the past games based on the property. The game is definitely built more for existing fans of the series though, offering them a glimpse into some of the unseen moments through the bevy of sidequests in the game. Some of these sidequests can be a little too basic at times in setup, but they still help to add a bit more character to the game.

Both the main story and sidequests are accessed through a semi-open world setup that is split between a world map made up of many different locations and smaller area maps. The world map is not traversable at all, instead just serving as a method of fast travel between the various locales. Even without a true open world, Dragon Ball Z: Kakarot lets players explore areas never made available in the past. These areas can often feel pretty dead with a minimal amount of NPCs, but that is how you would expect most of the environments to be that you will be visiting. The entire Evil Emperor Frieza arc in the game takes players to planet Namek, with no way to return to Earth until it is over. This feels a bit restrictive after the way Earth was handled, but there was only so much they could do considering the entire arc takes place there.

The pre-existing story also somewhat limits the game in another area as well. During the intermission areas you can select your party and play with who you have available at the time, but the story sections that take up the majority of your time playing stick you with specific party lineups based on the story at that point. There really isn’t much the developer could have done to avoid this without making the game sort of an elseworlds experience, but it still is a little disappointing nonetheless. 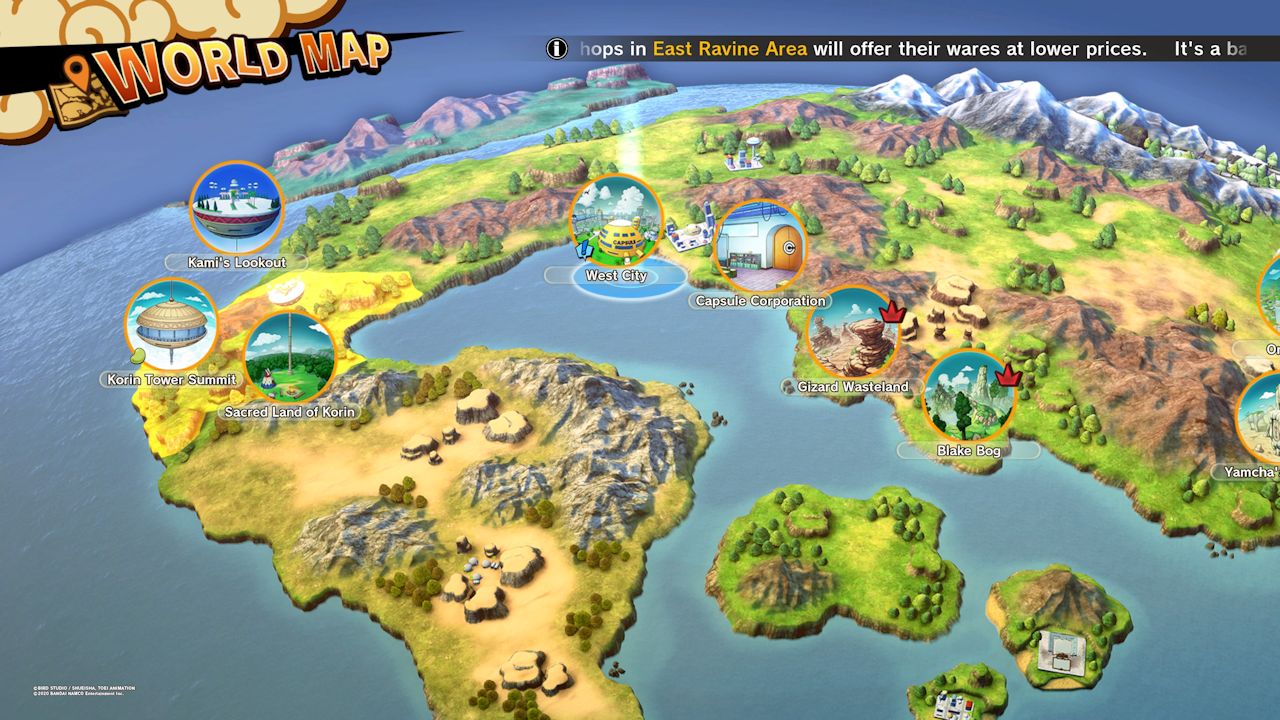 Dragon Ball Z: Kakarot is structured to where you have story quests that you must complete to push the story forward, while also taking on any sidequests and extra tasks you would like. For an RPG, the structure is pretty linear overall, as you only have certain sidequests you can obtain at a time and there’s few variations to the main story along the way. There is still a lot to do in the game though, such as fishing or the two mini-games where you can drive or play baseball. These latter two are ancillary parts of the game that some people will skip, but they are a lot of fun and their inclusion shows the love for the series that they have to include these deep cuts from the franchise.

Coming off of one of the best combat styles in the series’ history with FighterZ, Dragon Ball Z: Kakarot had a lot to live up to in that department. The one found in this game is very different, however, as it builds off more of what have been found in Dragon Ball Xenoverse instead. This game’s combat takes place in decent sized arenas where the goal is to reduce the opponent’s health to zero. This can be done by utilizing melee attacks and ki attacks with just the press of a button, along with super attacks that require one extra button press. Unlike some past games, there are no special input commands to learn, as each character is controlled in the exact same way. 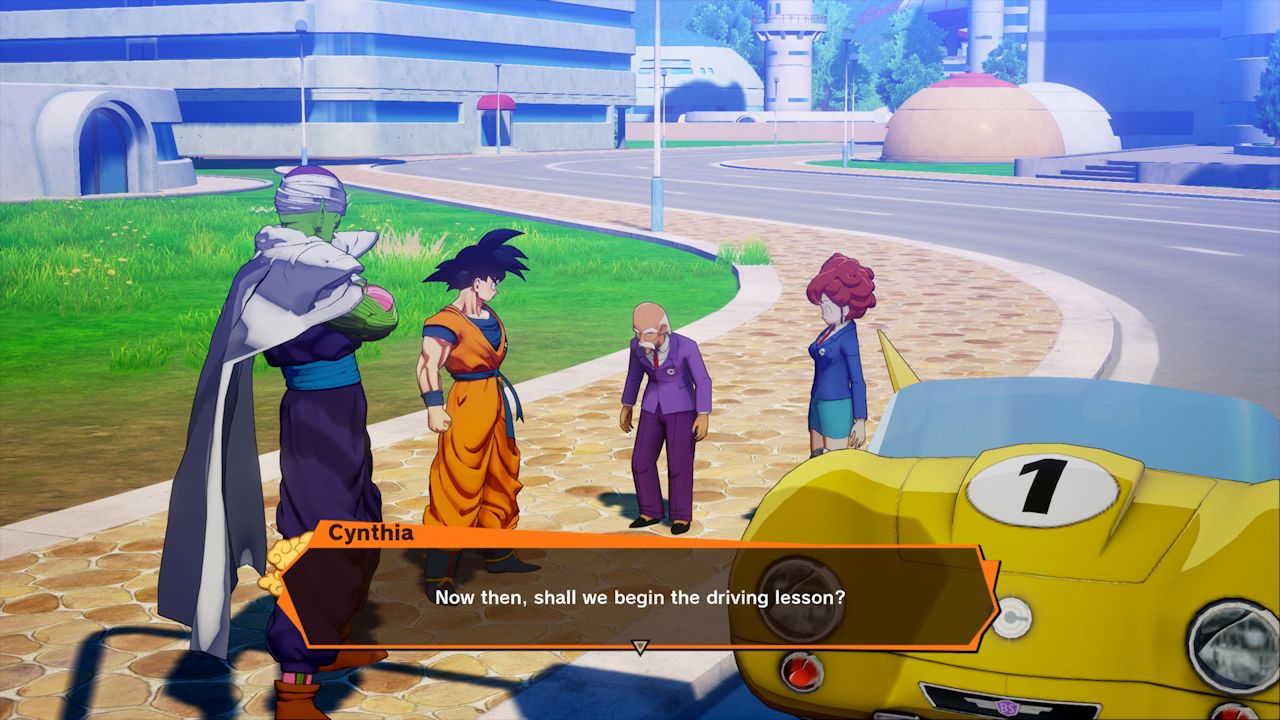 The difference for each character really starts to come to the surface through the super attacks, with each character capable of setting four at a time. These super attacks can be changed out once you learn new ones, which are done via a mix of the Training Grounds and the individual character skill trees. To acquire new super attacks here, two of the main collectibles in the game come into play with D Medals and the multiple color Z Orbs. This does add some longevity to the game, as you will have to fully explore the world to pick up these collectibles that you can then use to upgrade your characters.

You can’t have a Dragon Ball game without some sort of team mechanic and Dragon Ball Z: Kakarot implements this pretty well. While playing, you can have up to two support characters to choose from, with the story often dictating who you have with you. These support characters will help you in battle, including being able to use super attacks and even team up for special Z Combos. Compared to the online centric Xenoverse, the team based combat still works well in a single player only setting, which is something some past games like Dragon Ball Z: Battle of Z struggled with. 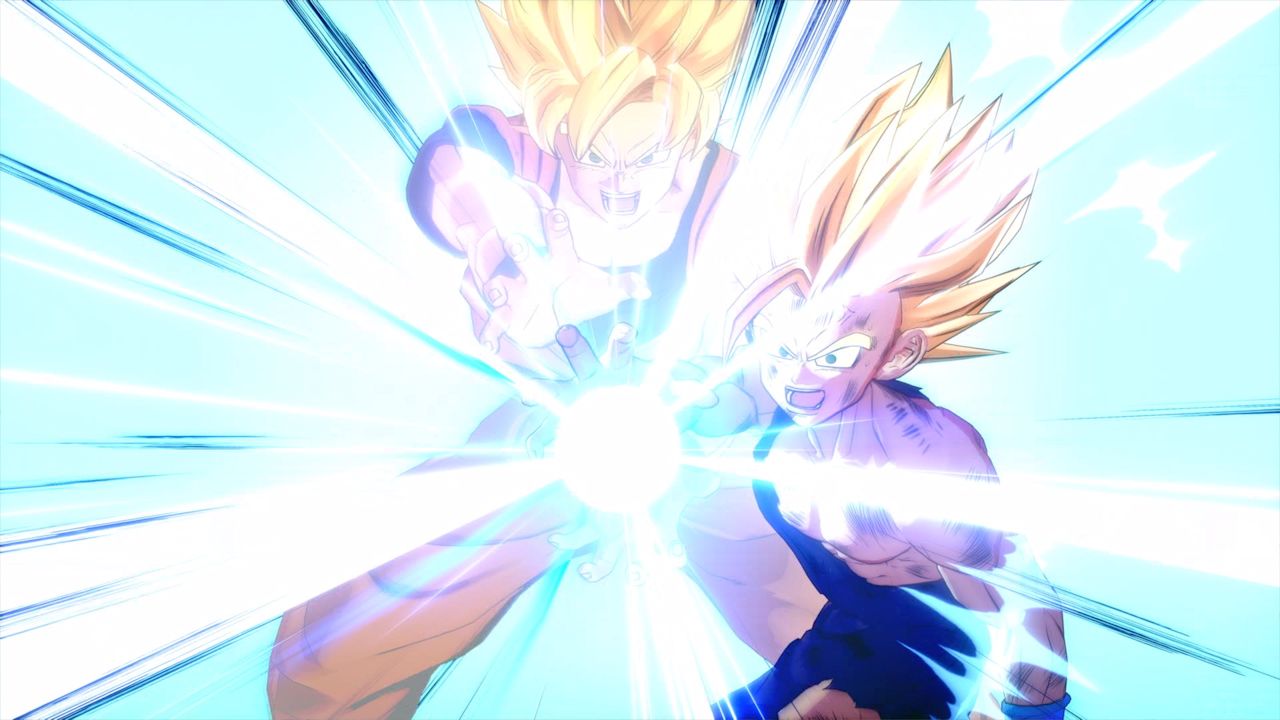 Dragon Ball Z: Kakarot also introduces what are known as Community Boards and Spirit Emblems, which are used in tandem to level up different areas of the game. These Community Boards are split into seven different types, Z Warrior, Cooking, Training, Adventure, Adult, Development, and Gods, each with a different purpose and leader. Once you are given the Spirit Emblem for the leader of each Community Board, you now have access to said board and can place other Spirit Emblems that you collect upon them. Each Spirit Emblem has level rankings for the seven types as well, which provides you some guidance for which board you want to play them, though you can level up the different rankings on each ones with Gifts that you earn in the game as well.

Fans have been asking for a modern day version of The Legacy of Goku games for years now and Bandai Namco and CyberConnect 2 have partially delivered that. Where Dragon Ball Z: Kakarot really shines is how it expands upon the story of Goku and friends that everybody knows by now, with the new side stories and mini-games making this one of the lengthiest Dragon Ball games to date. However, the combat and RPG elements can feel a little too simple and unoriginal at times, making Dragon Ball Z: Kakarot a hard sell for newcomers.

While the popular Xenoverse series utilized the RPG genre to try something different, Dragon Ball Z: Kakarot offers a more traditional retelling of the series in a single player only experience that should at least get the hardcore fans of the series excited to experience this adventure yet again.