A lovely little adventure with a few quirks. 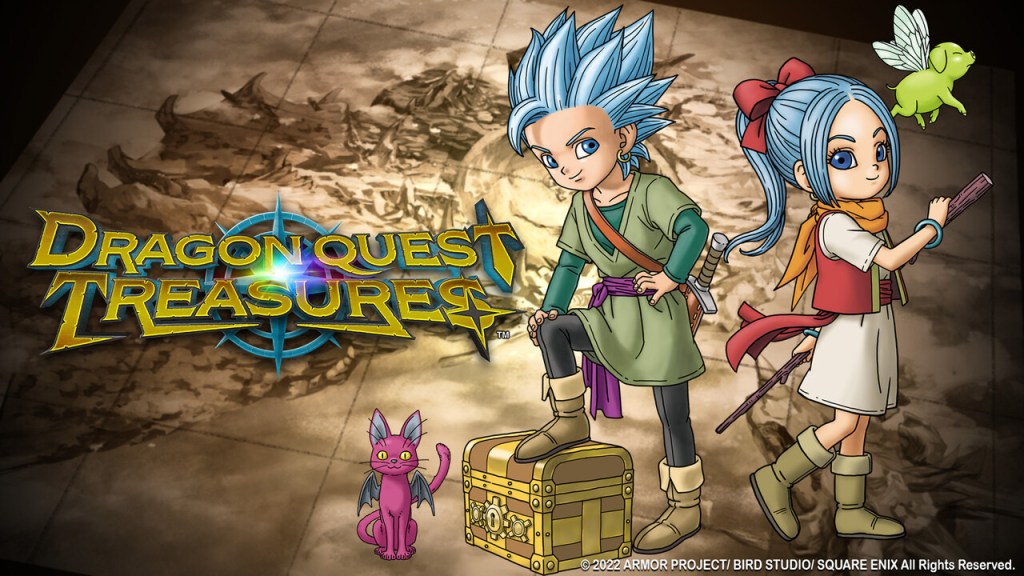 As children, we all had grand ideas of what life had to hold for us. The power of imagination propelled us further than we could have ever imagined, taking us to the furthest reaches of space, and anywhere in between. With this mindset in place, the thought of becoming a pirate, sailing the world in search of treasures and riches beyond our wildest dreams sounded much more appealing than working in an office or retail.

It sounds strange to start this review off this way, but Dragon Quest Treasures has me longing for those simpler days. The thrill of exploring the world in search of an unobtainable goal instantly brought me back to the days of my youth, and while there may be a few stumbles along the way, its formula will have you hooked from the moment its truly grand adventure finally starts.

Welcome To Draconia, We’ve Got Fun And Games

Placing players into the shoes of Erik and Mia, players will set off on the grand adventure of a lifetime. Reminiscent of the adventures we would play along on as children, we find that these two orphans have been taken in by some of the greatest treasure-hunting pirates in the world.

Tired of being the second banana to the adults in charge, these two troublemakers decide to take this adventure into their own hands and head out on their quest through the lands of Draconia. After hearing rumors of some magnificent creatures that were recently captured, the brave duo free Purrsula and Porcus, steal a small boat and head out on their own to fend in the world.

It seems that fate is on their side, as these two just so happen to stumble upon a select piece of weaponry, the Dragon Daggers. These special tools are only able to be removed by those that they deem worthy, and it seems that this duo is in line to become the sole owners of these particular blades.

Alongside a colorful cast of characters, players will begin to unravel the mystery of their newly found companions and work their way toward the eternal glory they believe they deserve. It’s a very innocent story, invoking the memories of years since the past. It’s a game that wears its heart on its sleeve and showcases the joyful wonders of being a kid once more. Wholesome, if not a bit hokey in the overall scheme of things, players will find that the story takes a place on the back burner in the grand scheme of the world.

Hack And Slash Your Way To Glory

Dragon Quest is a franchise that oozes charm, and that isn’t just because of the franchise’s mascot. From the pun-derful writing to the overall vibe that these titles exude, Treasures is no different. While it may not be the typical turn-based action that fans of the franchise have grown to love over the past 11 mainline entries, the spin-off titles have done their fair share to propel the franchise to new heights.

As players take their first steps into the world, they’ll find that their character of choice controls extremely well, with snappy and responsive action. As an adventure title, this is one of the most important parts of the overall experience, as a poorly controlling hero can lead to extreme amounts of frustration. Thankfully, the team at Square Enix has ensured that Erik and Mia control like butter, giving players the chance to explore the worlds that they’ve crafted with ease.

While it may feel weird to not have the ability to sprint or double jump in a title such as this, players will soon unlock the ability to start utilizing those features. Fortes are a major part of this title, meaning that players will need to defeat and recruit new monsters onto their team to start gaining access to new spots in the world. With many different monsters to fight and recruit, players will need to partake in some combat opportunities before jumping into the recruitment side of things. Thankfully, since movement and control are tight and responsive, combat is, too… right?

Well, yes and no. Combat is incredibly simple, and could be considered one of the lower points of this entry. While it is quite snappy and responsive, it’s also quite dull in the overall scope. It would make sense, especially since these are just children with daggers, but the complexity could have been ramped up in favor of the player. Using the Y button, players will just need to slap monsters around until they vanish. There is also a Slingshot that takes over the role of traditional magic spells like Zam and Bedazzle, which can make things a little more interesting, but not by much.

Thankfully, while the combat is quite simple, it is punchy and gives players a good sense of power, especially once they have been surrounded by a team of monsters that they have cherry-picked to become their greatest companions on this journey. Letting your companions take care of the dirty work is quite easy to do, but jumping in for some mindless combat can’t hurt, either.

Beauty Is In The Eye Of The Beholder

While known more for his work on the Dragon Ball franchise, Akira Toriyama is one of the key factors in giving Dragon Quest its signature visual style. As players expertly maneuver their way through these worlds, the look and feel of the environments take center stage.

Dragon Quest Treasures houses a grand adventure, spread across 5 particular lands with their own theme. From the deserts of The Maneland to the tundras of The Hinterquarters, I found myself going off of the beaten path, just to see what these worlds hold. While there is a main quest to accomplish, the true spirit of adventure lies within searching for treasures across these lands.

As the name of this game states, Dragon Quest Treasures focuses primarily on the aspect of treasure hunting, and what a true joy that is. Thanks to the excellently crafted worlds, this activity doesn’t lose its luster. Utilizing the special powers of the Dragon Dagger, players can search for treasure with a simple tap of a button.

Wide open environments engorge with color and secret areas that utilize the Fortes to great extents. The general lands that players will explore encourage exploration, but taking the wrong road could lead players into a troubled spot if they aren’t properly prepared. This makes each journey out into the wild exciting, if not slightly predictable after a few repeat visits.

Monsters do not scale with the player, so gamers hoping to explore all of the parts of a level may need to grind before returning to fully complete an area. This can lead to some frustrating roadblocks but does encourage return visits. Thankfully, the majority of the area will be available to explore no matter your level, so getting the chance to experience everything they have in store is quite exciting.

Exploration isn’t the only thing that will keep players busy throughout their adventure, however. Being able to build and customize their main base of operation is key to any successful treasure hunter, and that option is also available to the player.

After completing the prologue of the game, players will conveniently find the perfect base for their operation. After doing a little bit of busy work, more options will slowly start to unfold, from a canteen and convenience store to a new type of operation called The Snarl. Players will have to face off against hordes of enemies, but the tips and tricks leading to the location of the Soulstones could prove useful for those hoping for a hint.

Even after the adventure has fully come to an end, there is still a countless amount of work to be done, from fully refinishing their base to helping those in the worlds they’ve been exploring for hours on end with side-quests and tasks. This helps keep things from growing stale in the long run, even though the basic formula that the game puts out could be deemed repetitive in other titles.

A Wonderful Soundtrack Packs A Punch

What’s a proper adventure without an epic soundtrack providing the power to keep pushing through the toughest obstacles, though? Dragon Quest Treasures keeps the tradition of an epic, sweeping score to accentuate every step of the journey. The music is easily one of the standout audio portions of this game, as the voice acting ranges from adequate to abysmal at times.

One of the only other faults that this title has in my eyes is the voice acting in general. While Erik and Mia do a fair job of delivering their lines, some of the companion voices will have players either switching the language or turning off their volume.

This could be a great entry point for players hoping to experience a Dragon Quest title for the first time, but with the overall obnoxiousness of the companion monsters, some players may brush it off to the side as a kid’s game or completely disregard it after hearing the shrill shrieks of Oozabella.

Players can replace their companions with new monsters soon enough, but the initial few hours can be rough having to listen to these companions. While the voice acting may drag this title down a bit, players can at least expect to hear some rousing tunes to keep their spirits high even in the face of adversity.

Dragon Quest Treasures is a game that requires and rewards patience. It’s imaginative, fun, and exciting in all of the right ways. Even with its faults, it brought forth one of the most fun experiences I’ve had all year with a game. It invokes a sense of child-like whimsy, and once all of the pieces begin falling in place, it starts cooking with oil.

Dragon Quest Treasures is a celebration of everything that makes this franchise a unique and special treat. Those willing to put up with a few slow hours to start their grand adventure will surely not be disappointed with the treasure that lies within, as the jewels and coins shine brightly within.