An old school beat-‘em-up for a new generation. 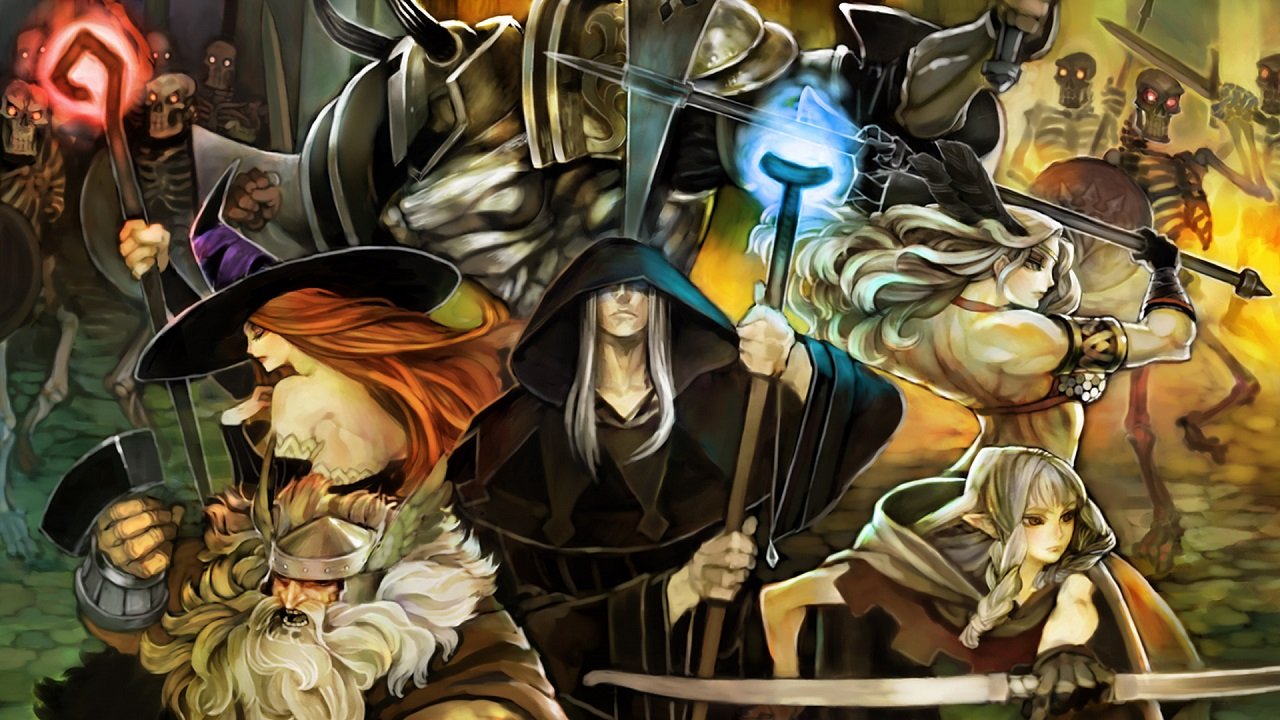 Dragon’s Crown received a rather chilly reaction back when it debuted on the PlayStation 3 in 2013. It wasn’t due to the gameplay, the story or even the soundtrack — no, the majority of criticism focused on one thing: its art style. Vanillaware is renowned for its unique artwork, but this game proved too much for many to handle, prompting them to hurl insults at Director George Kamitani and him returning some in kind. And in the end, that’s what the game became mostly known for: two overtly-sexualized characters and the controversy surrounding them.

Now in 2018, Dragon’s Crown has arrived on the PlayStation 4 in the form of Dragon’s Crown Pro, offering everyone a chance to experience the same magic that many so tragically overlooked five years ago. And same is the operative word here, as there is nothing particularly noteworthy that separates this remaster from the original. Sure, there’s 4K graphics and a remastered orchestral soundtrack, but there’s absolutely nothing new in the gameplay department — or just about anything else for that matter.

Therefore, if you didn’t like Dragon’s Crown in 2013, then there’s nothing here for you; and if you did like it, then maybe the 4K graphics and remastered soundtrack will be worth giving it a second go (remember to upload your save data from the PlayStation 3 or Vita version!).

As for everyone else? Welcome to Dragon’s Crown Pro. 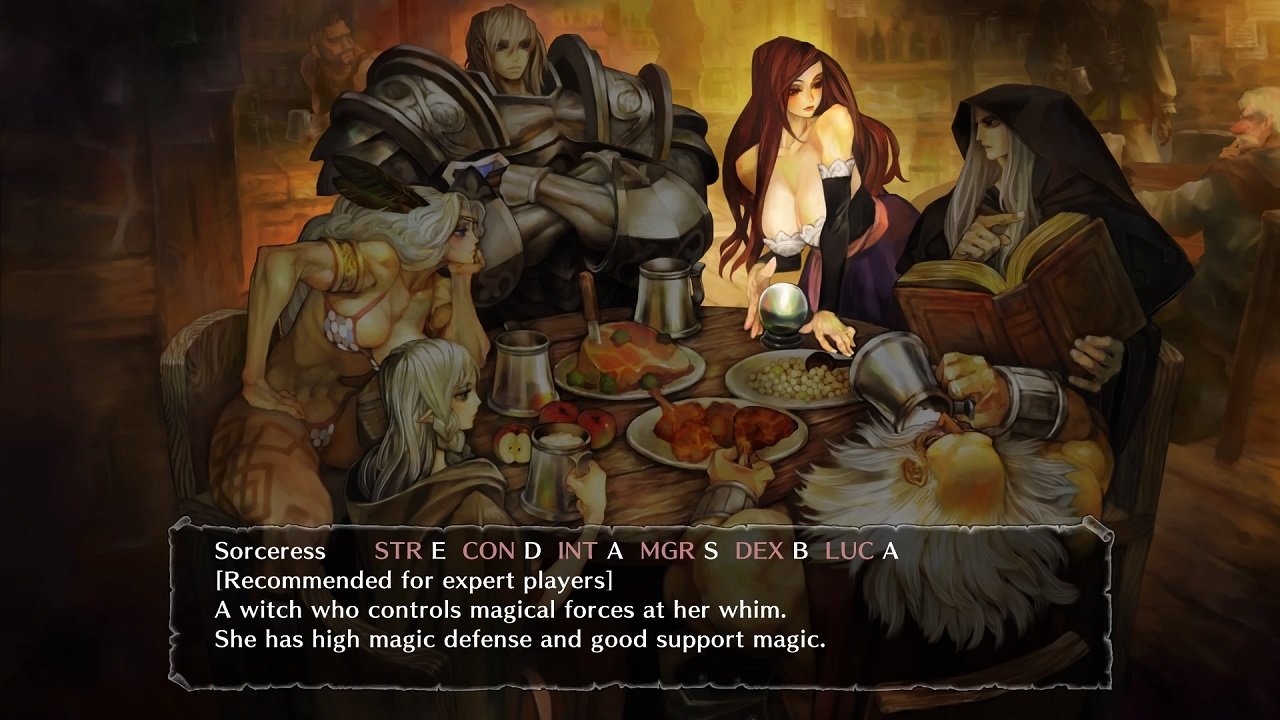 For those old enough, playing Dragon’s Crown Pro will almost feel like you’re going back to a different era. An era where arcades — not consoles — were the preferred method of gaming, and playing similar side-scrolling beat-’em-ups like Double Dragon, Final Fight and Golden Axe served as more than just an illustration of how much you’ve aged. Of course, this should hardly be a surprise as the very impetus for making it was to pay homage to such titles and “advance the genre.”

And advance the genre it has, combining the basic gameplay offered by its predecessors with the breathtaking visuals and enthralling soundtrack that only Vanillaware is capable of producing. However, what truly helps take this game to the next level and beyond are the classic RPG elements that are flawlessly blended in. Sprawling dungeons? Yep. An experience and skill system? Absolutely. Loot? You better believe it. Dragon’s Crown Pro has got it going on.

Dragon’s Crown Pro offers players six classes to choose from, each with their own set of strengths and weaknesses. What’s particularly praiseworthy about these classes is just how unique they are and how vastly your experience will differ when playing each. In fact, the game actually clues you in on these potential differences via a de facto difficulty system which ranks classes based on each statistic and the type of player they’re catered to. For example, the hyper-offensive Amazon and defense-oriented Fighter are rather straightforward and suited to those unfamiliar with the genre; while spellcasters like the Sorceress and Wizard require a great deal of finesse to use effectively, suited to a more experienced crowd. Of course, with enough practice, playing as any class will become second-nature to you, but it sure won’t feel like that when the story begins.

And while on the subject of story, this turns out to be Dragon Crown Pro’s weakest feature. In short, as one of these six classes, you’re tasked with finding the eponymous Dragon’s Crown — a mystical artifact that purportedly has the power to control dragons — on behalf of the Kingdom of Hydeland. At the conclusion of this search, you’ll face off against an ancient dragon and upon its defeat, you’ll restore power to the goddess who protects the kingdom.

The problem? You have to repeat this process three times.

To its credit, Vanillaware did a good job with the story and the game ramps up in difficulty each time you go through, but saying it’s good enough to suffer through three times is a stretch. When not actually looking for the Dragon’s Crown you’ll be stuck in the same town with the same destinations just going back and forth through the motions until you reach your goal; something made all the worse by the fact that the narrator will repeat the same lines as you enter and exit buildings or come in and out of town. Though you can circumvent this by turning off the narration and subtitles in the options menu, the only way to remove them for good is to grit your teeth and push through the story. In an odd way, the game only begins when the story ends.

Interestingly, this weakness ends up making the strength of Dragon’s Crown Pro’s class system all the more pronounced. You’ll have to play through the story three times with each character, but it will be a radically different experience each time. Between their different appearances, playstyles and skills, though you’ll be fighting the same enemies in the same locations each time, it will rarely feel like you are. For instance, with her ability to parry and gain a few moments of invincibility, create shockwaves with her axe and enhance her attack speed as she continuously attacks, the Amazon can easily tear through hordes of enemies in seconds; meanwhile, the Sorceress, with her ability to teleport, unleash a blizzard that can repeatedly hit everything on the screen at once and summon a thundercloud that autonomously targets your foes, can rain down death from afar but you will need to carefully manage her MP. 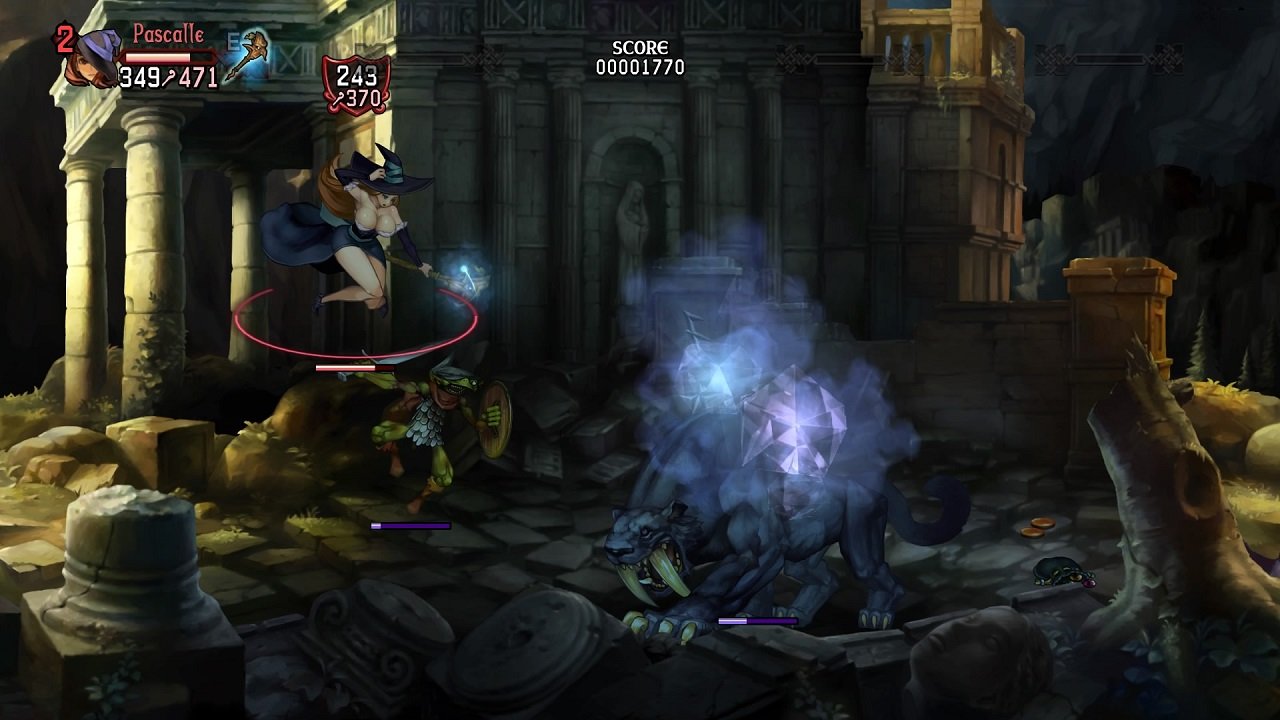 Such differences will immediately become apparent when you enter any one of Dragon’s Crown Pro’s nine dungeons. Much like the story, you’ll have to repeat them several times. Unlike the story, however, they never really get old. You can be fighting through hordes of undead in a series of catacombs nearly devoid of light at one point, only to find yourself moments later inside of a besieged fort teeming with goblins and orcs who are willing to fight to the death to defend it. What’s more, each of these locations feel genuinely unique and are an absolute wonder to behold, featuring a level of detail — which has gotten even better thanks to 4K — that not only makes the environments pop, but enemies feel eerily life-like.

However, don’t take in the beauty for too long, or you’ll soon find yourself on the business end of a sword, fireball or whatever else the enemy has at their disposal. Combat is fast, furious and incredibly addictive. So addictive, in fact, that you probably won’t want to return to town. Luckily, you can fully indulge that desire by entering multiple dungeons in a row. It’s a gamble though: you’ll steadily gain special bonuses, such as finding more gold and higher quality loot, but you won’t be able to restock any of your items or repair your equipment. You can do this alone if you’d like — you can actually go through the entire game that way — but it’s far easier to call in some help. This can be done in one of three ways: find and resurrect AI-controlled characters, local co-op or go online and team up with up to three other players on either the PS4, PS3 or Vita, bringing the already chaotic combat to peak insanity. Do note though, that multiplayer isn’t unlocked until you complete all nine dungeons for the first time and you can’t pause whatsoever.

At any rate, regardless of how you choose to explore, you can head back to town when you’re done to make use of the spoils you earned during your adventure. The equipment and items you find from treasure chests or defeating bosses can be equipped or sold, and there’s even an added risk/reward element of making you spend gold to appraise them. Meanwhile, the experience points you earn from defeating enemies will eventually lead to you gaining a level, yielding skill points that can be exchanged at the local guild for a variety of skills. And while there, you can take on an assortment of sidequests that offer extra gold, experience points, skill points and even unlockable artwork. Outside of the artwork, each and every reward serves one purpose: making you stronger for your next outing. 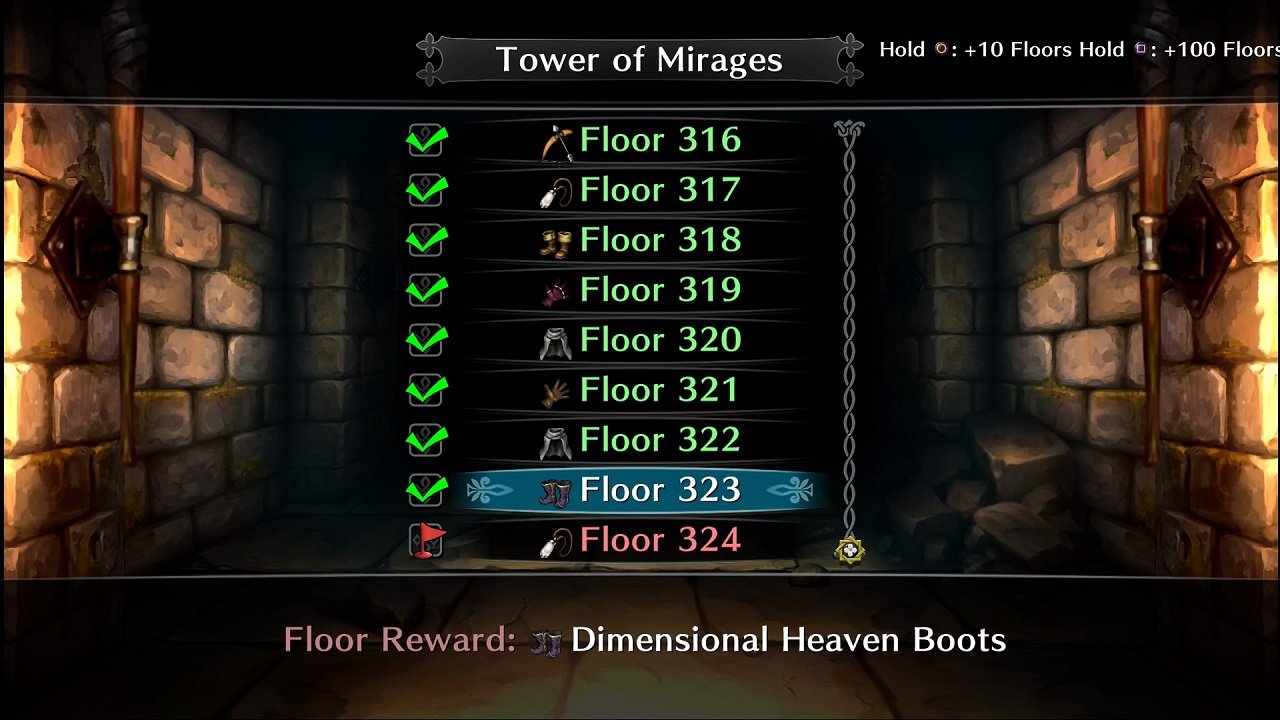 If this were the original Dragon’s Crown then this would have been the end. From beginning to end, the game’s flow remains the same: enter dungeon > collect loot > enter dungeon > collect loot. Rinse and repeat. Between the alternate routes, multiplayer and combat, this isn’t necessarily a bad thing. However, for many, there is only so many times one can do the same 18 routes before the game starts to feel overly familiar. Sure, the Labyrinth of Chaos that’s unlocked after defeating the final boss offers a good deal of fun thanks to its randomly-generated floors, but that fun can quickly turn into frustration when you’re a level 99 Sorceress staring down a room of level 255 enemies.

This was the reality for many who played at release until Vanillaware introduced a patch several months later that introduced Ultimate difficulty, raising the level cap from 99 to 255 and changing the Labyrinth of Chaos into the Tower of Mirages, a dungeon whose inhabitants steadily become more powerful the deeper you go. This is the endgame for Dragon’s Crown Pro and you get it right out of the gate. It’s a good thing too, because it completely changes the face of the game. A seemingly endless amount of floors (over 50,000 have been reported), new equipment and bosses with a host of new attacks and abilities, will give players more hours of gameplay than ever before. 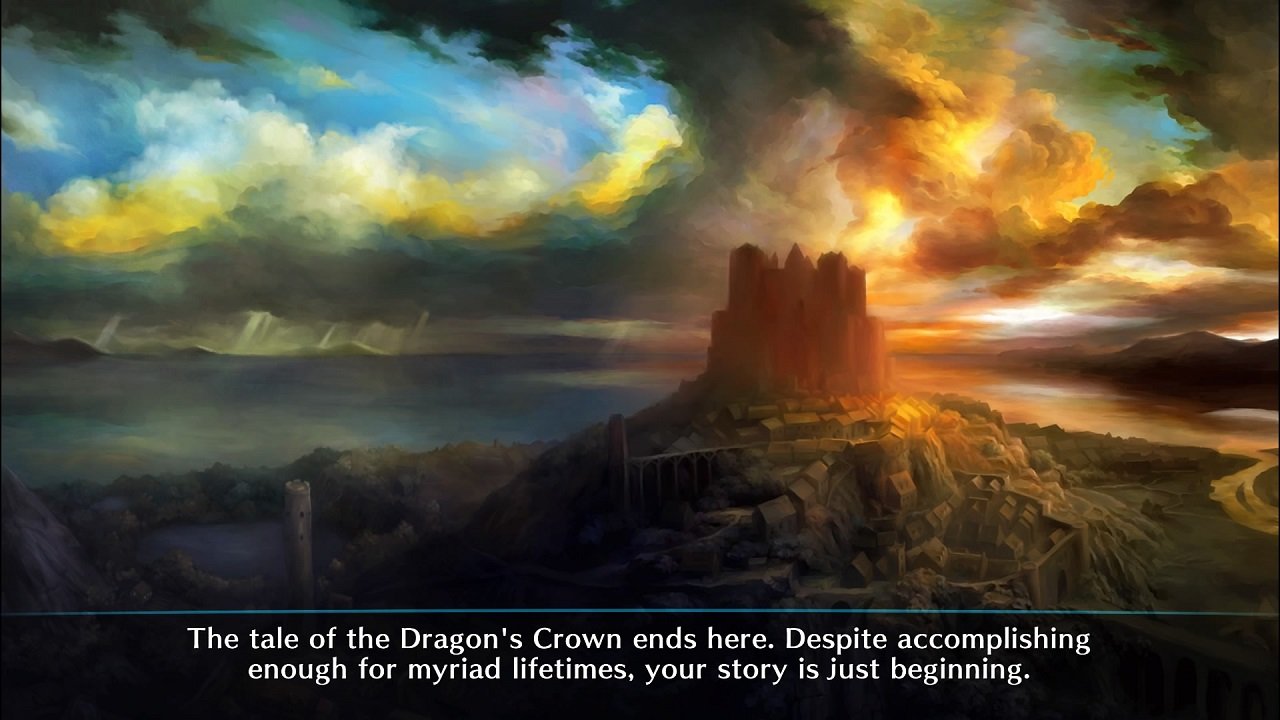 When you deftly combine gorgeous aesthetics, solid RPG mechanics and old-school beat-’em-up action into a single game, it’s hard to go wrong — and it didn’t. Dragon’s Crown was already a stellar game back in 2013 and its remaster is an equally stellar game in 2018. Sure, it would have been great if Vanillaware added extra content to further differentiate it from the original, but when a game plays — and looks — as good as this, it’s hard to hold such complaints against it.

Though with that in mind, you really have to consider whether a purchase is worth it here. For those who own the original, Dragon’s Crown Pro offers little more than the convenience of playing on modern consoles. For everyone else though? Go for it.