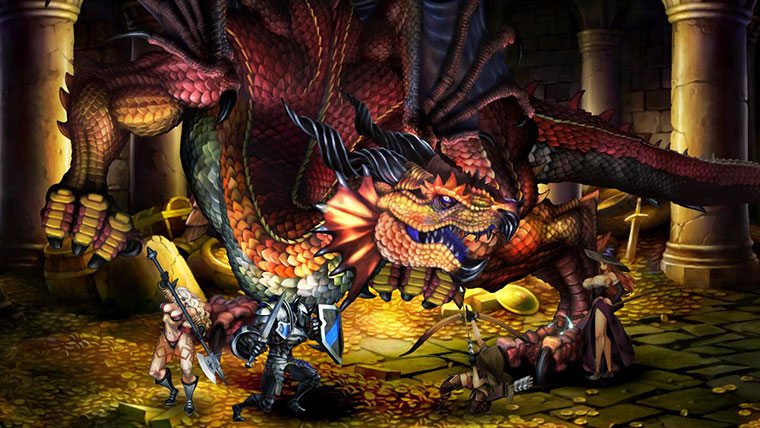 Have you ever wanted a deeper experience with your brawling action? A more RPG-like game with skill trees, weapons, upgrades, and quests to go alongside your side-scrolling beat ’em up? Your ship may have just come in, and in a major way. Dragon’s Crown will soon be released on the PlayStation 3 and PS Vita, having all of those things, and it’s beautiful to boot.

The game’s over-the-top animations and art style have garnered most of the headlines so far. The art direction of Dragon’s Crown is one of excess. It features unrealistic body proportions for some of its male and female characters, and it won’t take long to get a big dose of it upon firing the game up for the first time. And by it, I mean breasts. Giant bouncing breasts in Dragon’s Crown are a thing. Are they too big? Do they oversexualize the game? Do they objectify women? I don’t know if they do or not. Probably for some people, you could definitely make a case for it, but it’s art nonetheless. If this is the sort of thing that will either embarass you or enrage you, you should probably pass on Dragon’s Crown. But you’d be missing one hell of a genre-bending mash-up, the likes of which hasn’t been seen in a long time.

Dragon’s Crown is one part brawler, that will remind you of the arcade classics of the past. I’m talking about the Altered Beasts and Golden Axes of yesteryear, and while it looks nothing like those games, it plays similarly enough to warrant the comparisons. Those types of games have taken a backseat in recent years, in fact, they just aren’t being made anymore. Occasionally a remix or re-release will pop-up that gets fans interested, but they are few and far between. Dragon’s Crown takes this once popular formula and expands on it greatly. It adds in a deep layer of RPG elements, customization features, storytelling, and artwork that fit together better than you could ever expect for such odd pairings. 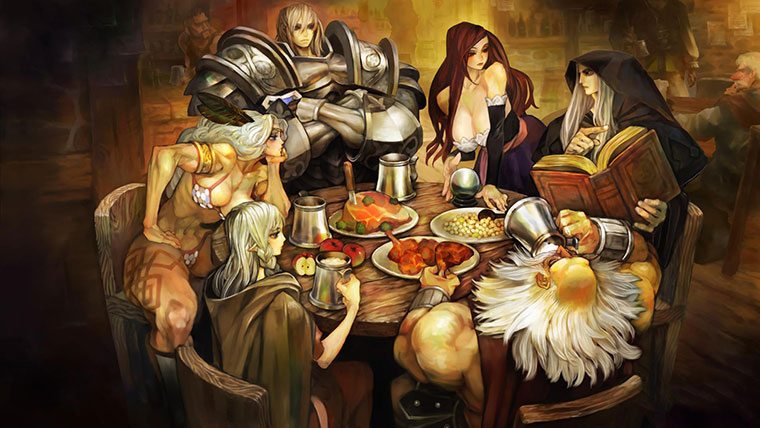 There are a lot of gameplay elements in Dragon’s Crown. Sure, at it’s core its pretty simple. It is for all intents and purposes your traditional side-scrolling brawler. Like I said before, it’s hard not to draw the comparisons to the days of Final Fight or Double Dragon. It’s really got that feel to it in the action sequences. And the combat is good. It’s fast paced and can be brutally difficult at times, nuanced enough to warrant some strategy, especially in boss fights and on higher difficulty levels. Any one game will have you selecting your main controllable character. There are six to choose from, each with varying strengths and weaknesses. These characters fall into the traditional archetypes that have been established over the years. You’ve got your male and female wizard characters, male and female warrior classes, and ranged female Elf and stout male dwarf. Each of these different characters play out how you think they would. You can do some minor customization to your main character, and this ranges from some colorful costume changes to naming them what you wish. They have strengths and weaknesses in combat that suit just about every different style of play.

The actual combat is pretty good on both the PlayStation 3 and the PS Vita, but it does have some drawbacks. It’s very easy to lose your character in both versions of the game. There is a lot going on on-screen in even the smallest of battles. This is magnified on the PS Vita’s smaller screen, because there’s just not enough real estate or indicators to keep you focused on where your character is. If you’ve been gaming long enough, you’ve likely played something similar to Dragon’s Crown. While it’s combat is obviously deeper than something that was made 20 years ago, it’s still got that old school brawler feel. There are more attack options, and better combinations, but some of the core mechanics are very familiar. You can ride mounts, pick up enemy weapons, or battle it out with your god given gifts. This quasi 3D brawler doesn’t necessarily break the mold in this aspect of the game, but it’s undeniably solid. Would it be enough on its own? Probably not. The major draw of Dragon’s Crown is just how deep the RPG end of the game is, and when you combine these two, you have a highly addictive element that keeps you coming back for more.

This is where Dragon’s Crown deviates from these classic games. There are a ton of progression and customization features that are essential to the Dragon’s Crown experience. The game offers a unique twist on party building and NPC players, you can customize your character attributes through earning points and spending them at your guild, and there’s random loot drops, all set amid a beautiful hub town that allows you take quests, pray for assistance, and craft magic and repair weapons for your next battles. You could definitely liken this aspect to the systems found in a Diablo or Torchlight, but in many ways, it’s much more. It’s all tied together. The side-scrolling beat ’em up action isn’t just focused on killing your enemies. It’s also about discovering treasure, unlocking treasure chests and finding hidden items strewn throughout the levels. It’s about picking the bones of adventurers that have already met their fate, bringing them back to town, and possibly adding them to your party. At the end of each level, you’re rewarded with new items, your gold stash is increased, and you’ll bring back any remains that you’ve found on your mission. You’ll be given some time to prep your party for their new adventure, and you head back out for another round.

The random loot mechanic is obviously a popular one. Used in games like Diablo, Torchlight, and even shooters like Borderlands 2, it’s something that adds personalization to the experience. With Dragon’s Crown, this is a major part of the game. There have probably been games that have tried it in this setting before, like Dungeons and Dragons of old, but nobody has done it this well before. Weapons and loot drops have major impacts on the way Dragon’s Crown is played. They can completely transform your character depending on what combinations you use, or what types of equipment is discovered. And it revolves around a system that is again, similar to Diablo. Players will need to make a decision at the end of each level, because loot needs to be identified. You are given the choice to either spend the necessary gold and identify the loot, or sell it, not knowing what special properties it might have. It’s just such an intriguing mechanic, if only because of the genre it’s being used in.

With looting being such a major component of Dragon’s Crown it’s worth noting how its actually implemented into the combat scenarios of the game. On both the PlayStation 3 and the PS Vita there is cursor which can be pointed at specific environmental objects. This pointer directs an NPC companion who just travels along with you on your journey, Rannie can unlock treasure chests or discover hidden artifacts hidden in each level, and will scamper behind you picking up loot along the way. Your actual playable character isn’t controlled by the cursor, but the cursor itself is used quite frequently. Alongside using it to uncover new treasure, it’s also used for opening doors, reviving party members, and casting some types of magic spells. It’s a weird implementation, especially on the PlayStation 3. The Vita actually incorporates some touch mechanics that replace the need for a cursor, but in the heat of battle it can be a little archaic on the PlayStation 3. Like I said, you can have hard time just finding your character, let alone a cursor on screen when the action is heavy.

The story of Dragon’s Crown is told largely through beautiful animated storyboards that introduce you to the colorful characters and locations of the game. While you never actually enter into a storefront or castle, these locations come alive by way of some voice over work and a narrator who keeps you on task. What you won’t find is long drawn out rendered cutscenes, or 3D areas to explore. It’s a tradeoff to some of the modern storytelling mechanics that most games use, but it’s effective and follows the general tone of the game. Similar to what you would find in a Professor Layton title, Dragon’s Crown is certainly teeming with the same sort of beauty and story delivery mechanics. It’s a small portion of the game, but all of these different areas and characters have unique and memorable styles to them that will leave a lasting impression. Dragon’s Crown won’t change much whether you decide to take multiple characters for a spin through the story, or not. As I stated before, the major draw is really the customization and character management that is vital for progression that really keeps you engaged. But there are multiple paths that can be taken on your journey. As you progress through the single player experience, new gamemodes will open up for the player. Online Multiplayer features harder game modes, and a devilishly difficult “Inferno Mode” which will beg you to come back in and give it another go at getting your character to the level cap.

Dragon’s Crown is available on both the PlayStation 3 and the PS Vita, and they both have their selling points. What’s a strength for the PS Vita version is a weakness for the PlayStation 3 in the pointer system and touch control options. Then again, the PlayStation 3 version is a beautiful thing to experience on the bigger screen that a television or monitor provides. It’s also easier to keep track of your character. Put them both together and you really have the ultimate experience. The nature of Dragon’s Crown can make it a game that never leaves your PS Vita, it’s great for small chunks of gameplay while in transit, but the best part is that you can completely pick up where you left off on both systems. You can upload saves to your PlayStation Network account and play a seamless Dragon’s Crown experience on both devices. It’s quite amazing as a pair, and you’ll need to be using all your free time to get through this game in full, with all the characters, modes, and difficulty options at your disposal.

At the end of the day, it would be foolish to think that some people won’t be put off by some of the artistic choices that Vanillaware has made with Dragon’s Crown. But judging a book by its cover is never a smart thing. You’ve got to give credit where credit is due, and Vanillaware is due some serious credit with Dragon’s Crown. It’s one of the most beautiful games that has ever graced the PlayStation 3 or PS Vita, and that’s saying something at the tail end of a generation that saw an impressive leap in visuals. Dragon’s Crown is one of the best games this genre has ever seen, because of its sheer depth and breadth of options. While they don’t have much competition these days, Dragon’s Crown is an impressive accomplishment nonetheless.