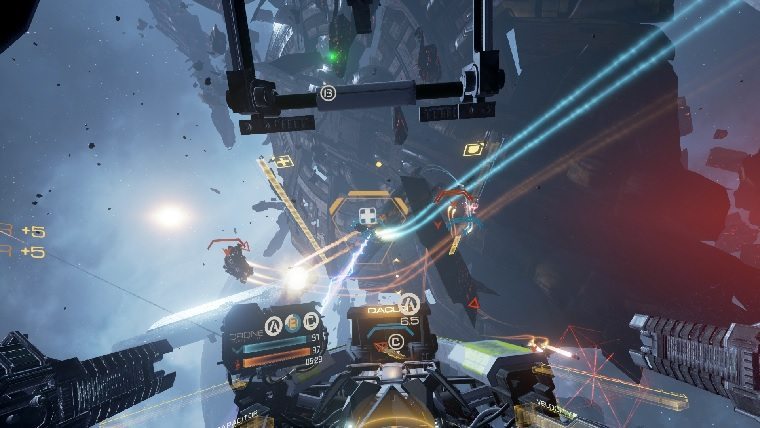 EVE Online debuted on PC back in 2003 as a massively multiplayer online space simulation that is without a doubt one of the most ambitious games ever made. Making a switch from the very complicated style of gameplay found in EVE Online to a more straight forward space shooter, CCP Games is branching out within that rich universe in the VR exclusive game EVE: Valkyrie.

Moving away from the insane battles that have taken groups of people hours upon hours to play as seen in EVE Online, EVE: Valkyrie is all about space battles from a first-person point of view. The PlayStation VR headset puts you right into the cockpit of your ship, with you able to look around in any direction to see your surroundings.

Being set in space works to the advantage of the game, as you are rarely up close with objects. As a result, the visuals for the game look pretty impressive for PSVR most of the time, though they can look a little blurry when you get up close to the ships and asteroids in space.

EVE: Valkyrie uses the DualShock 4 to control your ship, adopting a Star Fox or Rogue Squadron-esque type of movement around the different maps in the game. By moving the left analog stick, you can choose the direction in which your ship will move, with the head movement working well in tandem with this to create a very riveting experience. When just flying around, the flying seems pretty standard, complete with boost and braking abilities, but where the action really gets intense are the actual dogfights.

As would be expected with a game like this, there are high action skirmishes where you have the objective to destroy the enemy or some sort of target, where you will definitely need to utilize your weapons. The targeting reticle that comes from moving the analog stick is also where your primary weapon aims when you fire, which although jittery at times, works pretty well. In addition, certain ships have a secondary weapon that you can use by focusing in on enemy targets by moving the headset around to center the special marker upon the target.

The actual combat itself can be very exhilarating and the use of the PSVR headset only makes it better. Similar games to EVE: Valkyrie that have released in the past have always been a lot of fun, but this is most certainly the style of game that is built for VR. The spinning around of your ship at high speeds to chase after an enemy ship is just joyous and surprisingly didn’t even come close to being nauseating, though this will always be different for every person as with most VR titles.

Chronicles Mode is EVE: Valkyrie’s attempt at single player, though it is rather disappointing, as it really doesn’t offer all that much content. Single player has four different play types, with one of those being training. Recall is the only straight up single player missions with a little story, but there are only four of these and they are over in no time. Scout lets you check out five different areas that you can explore at your own pace, where the goal is to look for things called Echoes and Salvage. This can be pretty boring, as this can often take awhile and there is absolutely nothing exciting going on in these mission. Lastly is Survival, which is a leaderboard based mode where you face wave after wave of enemies to see how long you can last on just one life. Survival is overall probably the most fulfilling single player mode, as it provides you a real challenge compared to the others. 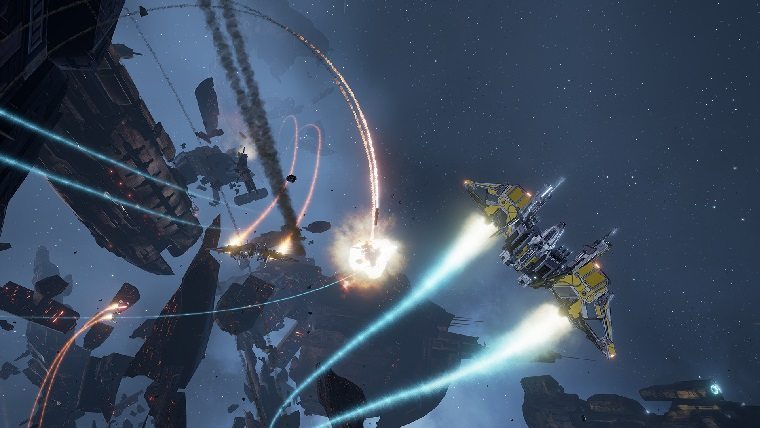 While the single player may be lacking in content, the focus in EVE: Valkyrie is on the rather meaty multiplayer. The multiplayer may seen a little limited at first with you only having one ship and Team Deathmatch against the CPU available, but reaching level 5 really opens the multiplayer a lot more. Essentially, the goal in EVE: Valkyrie’s multiplayer is to earn XP and materials through matches that can then be used to purchase additional ships, tubes to store those ships in, and other upgrades that range from cosmetic to stat altering. There are also daily challenges that you can complete for additional materials.

Focus in EVE: Valkyrie is on the rather meaty multiplayer

The experience is far from the same in the different ships either, giving players a experiment with the one that works best for them. There are three classes of ships, Fighter, Heavy, and Support, of which there are numerous for each one. The Fighter class is the one players will start with via the Wraith, but soon you will get to try out the others, such as the Heavy class ship Spectre. Rather than using the analog stick to aim for shooting, this one relies on the movement of the headset. Similar to RIGS: Mechanized Combat League, this works quite well, especially with the use of the controller itself to turn. This could have really felt awkward and difficult to pull off, but it just feels right in this game. The Support class is definitely the most different of the bunch, as your goal is to heal your teammates or remove shields off of the enemy, which isn’t explained all that well in-game.

Team Deathmatch is not the only style of game mode either, as you can also go for more objective based game types like Carrier Assault. In this mode, the goal is to take control of different capture points of the enemy’s base to lower their defenses, with you then able to take them down completely. There are also other control style missions where you take points by placing drones, so this is plenty of variety in the multiplayer here.

The multiplayer in EVE: Valkyrie is quite good, but it is somewhat marred by what feels like a grindy experience that can only be helped by in-game microtransactions. The Quartermaster section of the game is where most of the customization and microtransactions lie, with you being able to purchase War Chests that provide you with gold using real currency. You can then exchange this gold for in-game silver, which can then be used to purchase Implants that gives you 50% XP boosts for certain periods of time. 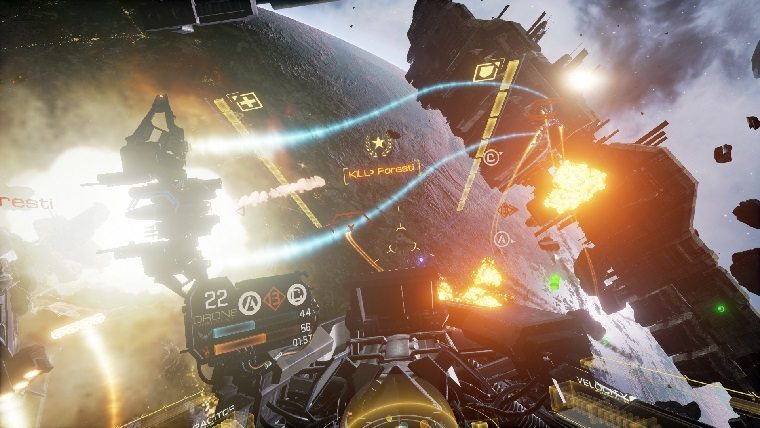 XP is very important in the game as well, as that is how you can gradually craft new ships to add to your fleet. However, the system implemented in EVE: Valkyrie is incredibly frustrating. The experience is way too reliant on microtransactions as the only way to avoid it feeling like too much of a grind, which is not a good way to approach a game such as this.

PlayStation VR is all about immersion and EVE: Valkyrie does a fantastic job at handling this by putting players right into the cockpit of their very own ship. The multiplayer game modes are the main attraction in the game without question, where your goal is to level up and upgrade new ships in your fleet. This process can be sped up with irritating microtransactions, but that doesn’t stop EVE: Valkyrie from being one of the best experiences thus far on PSVR.