It's time to break out. 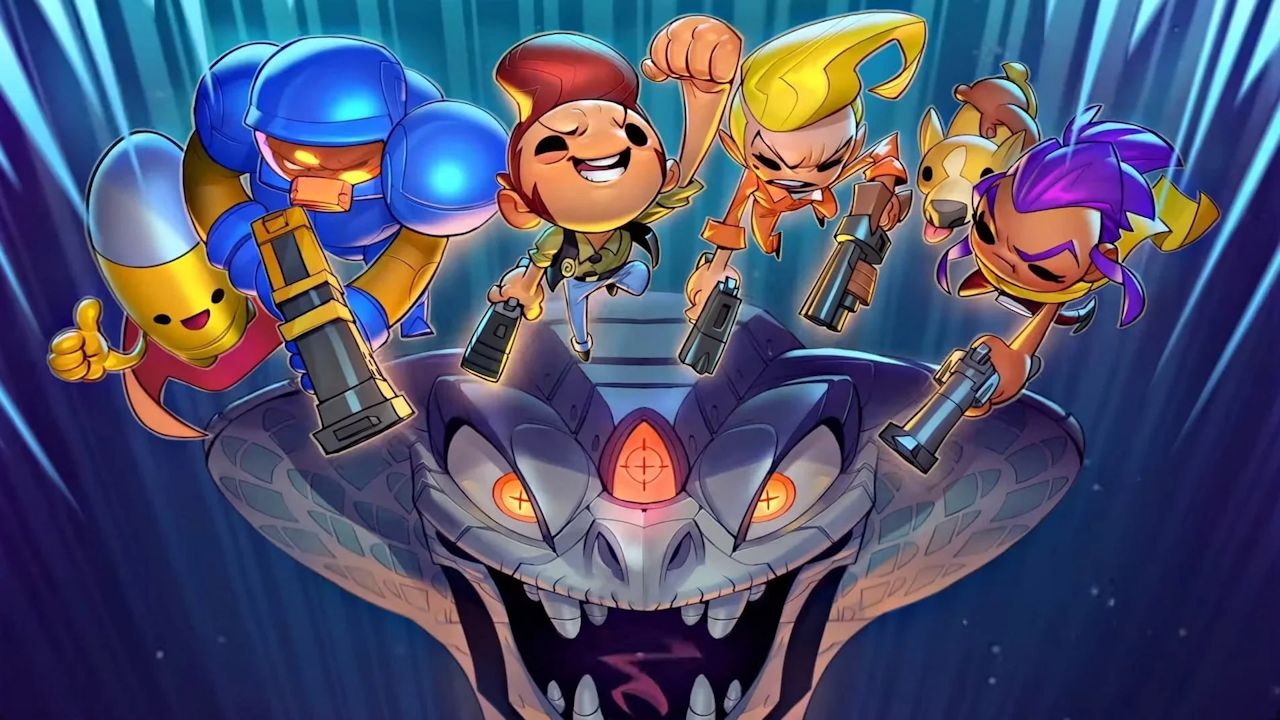 Devolver Digital has published a number of great indie titles over the last few years, with Dodge Roll’s Enter The Gungeon being among the best. The roguelike bullet hell game with a dungeon crawler perspective felt fresh when it released back in 2017, leaving fans wanting more. Rather than give a straight up sequel in the same sort of style, Dodge Roll instead decided to go a little bit different route with the spin-off titled Exit the Gungeon.

With a title like Exit the Gungeon, players would probably expect the game to be a sequel with similar gameplay and a few upgrades. That is certainly not the case though, with Exit The Gungeon serving as a spin-off of the dungeon crawler style. Instead, the gameplay moves from a top down style to a sidescrolling 2D style, which brings a whole new realm of play style into the mix while also feeling a lot more compact. 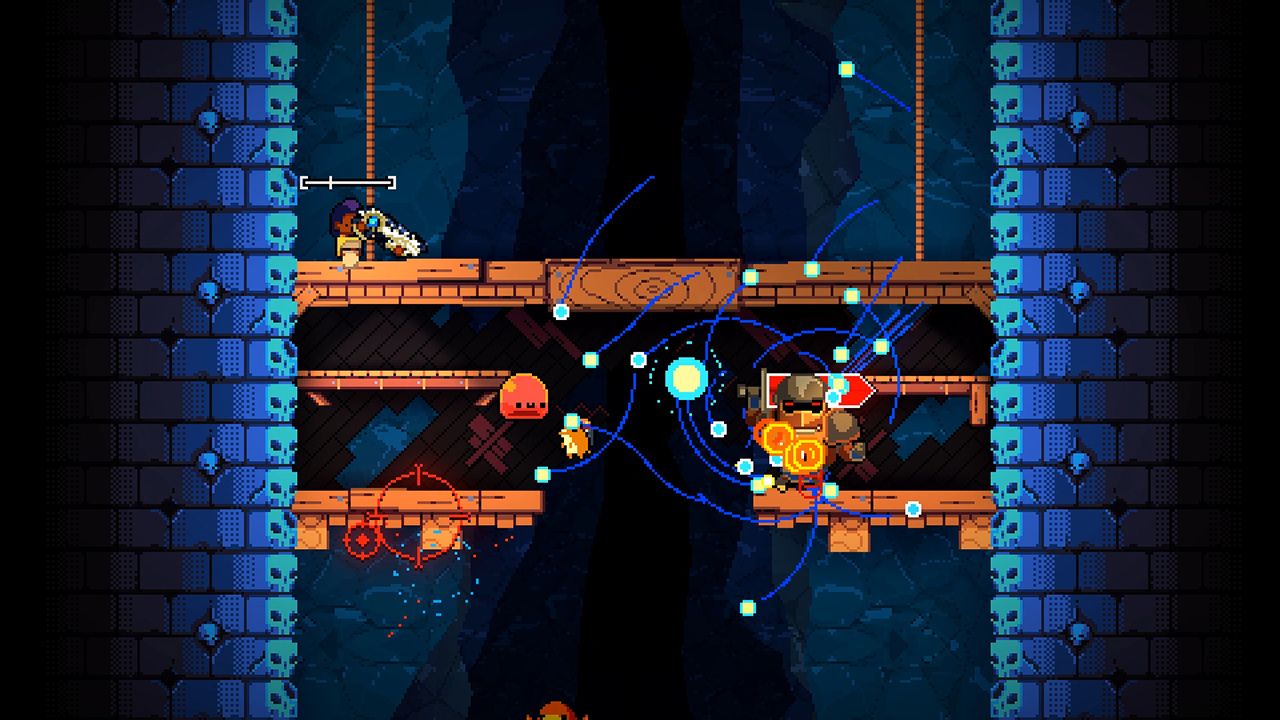 Exit the Gungeon starts with your character being told that the Gungeon is collapsing and your only way out is up. After a quick tutorial section that teaches the mechanics, you are thrust right into the game itself, which is a long running sequence that has you fighting for your life against a barrage of different enemies. Just like the original, Exit the Gungeon is a roguelike game in that the level designs and enemies are random as you continually take the elevator to the top. This means you never know what to expect on any given run, which makes the game one of those you can jump into anytime and get a different experience. You can even change characters from the hub area, though they all play exactly the same.

Regardless of the level design, your goal in each stage is to take out each of the spawning enemies and avoid taking damage in the meantime. The latter can be done with your trusty dodge roll technique by pressing A or L, which can be used to move through bullets and other obstacles without taking damage. In addition, you can also dodge upwards and downwards on the various platforms to either avoid damage by pressing B or ZL.

There’s a reason the first game was known as a bullet hell shooter and Exit the Gungeon is no different. Most enemies are not only trying to hit you with themselves, but also tossing out projectiles for you to dodge on the screen. With the limited screen space in the 2D plane, these can often get very tough to dodge at times. This was even worse on the iOS release, so it’s at least better to have more intuitive controls on the Nintendo Switch. Even so, there are still incredibly frustrating moments where the screen is covered in projectiles that are near impossible to avoid later in your run. 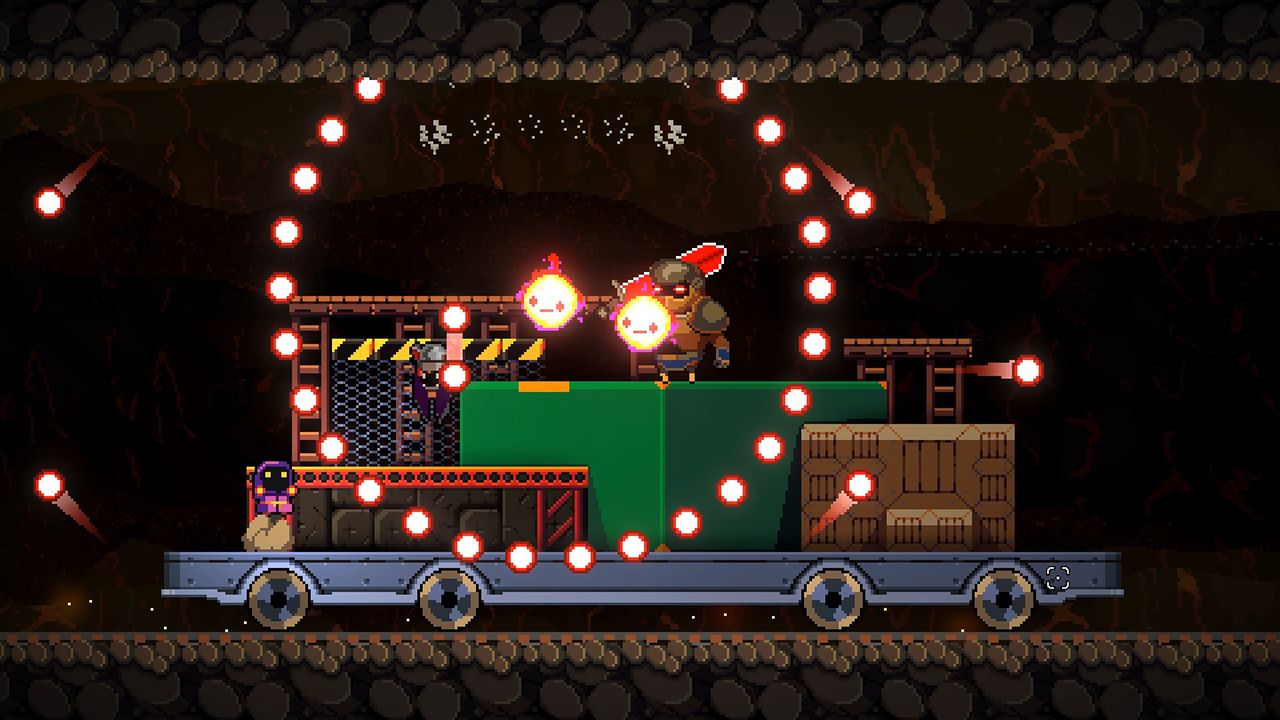 It’s not just enemies and level design that are random, but the most important randomized part of Exit the Gungeon are the weapons themselves. There are tons of different weapons in the game to use, with the ones you are given in the game being completely at random from start to finish. It is possible to enhance your chances of getting better weapons by not getting hit, as your active combo streak of not getting hit is tallied over time in the top right corner of the screen and betters your chances of getting good weapons when it randomizes. This streak also plays into how much money you get at the end of every area as well.

Each of these weapons are fired in the exact same way, with you aiming with the right analog stick and pressing R to fire. Holding down R is definitely the best method here for each weapon, especially with some of them being charge weapons. The default method the game teaches you for dodging and jumping with A and B instead of L and ZL can be difficult to pull off easily with the controls required to shoot, but the alternate controls work well together in a bumper jumper style.

Talking more about the types of weapons available themselves, you will find countless weapons at your disposal in Exit the Gungeon. These range from basic pellet style guns to grenade launchers and even weird weapons like ones that shoot music notes or arrows to damage the enemy. There are also some slow charge weapons like Bubble Blaster, but these really do not fit like they did in the original game, as they take way too long to charge and fire in a fast paced game like this. 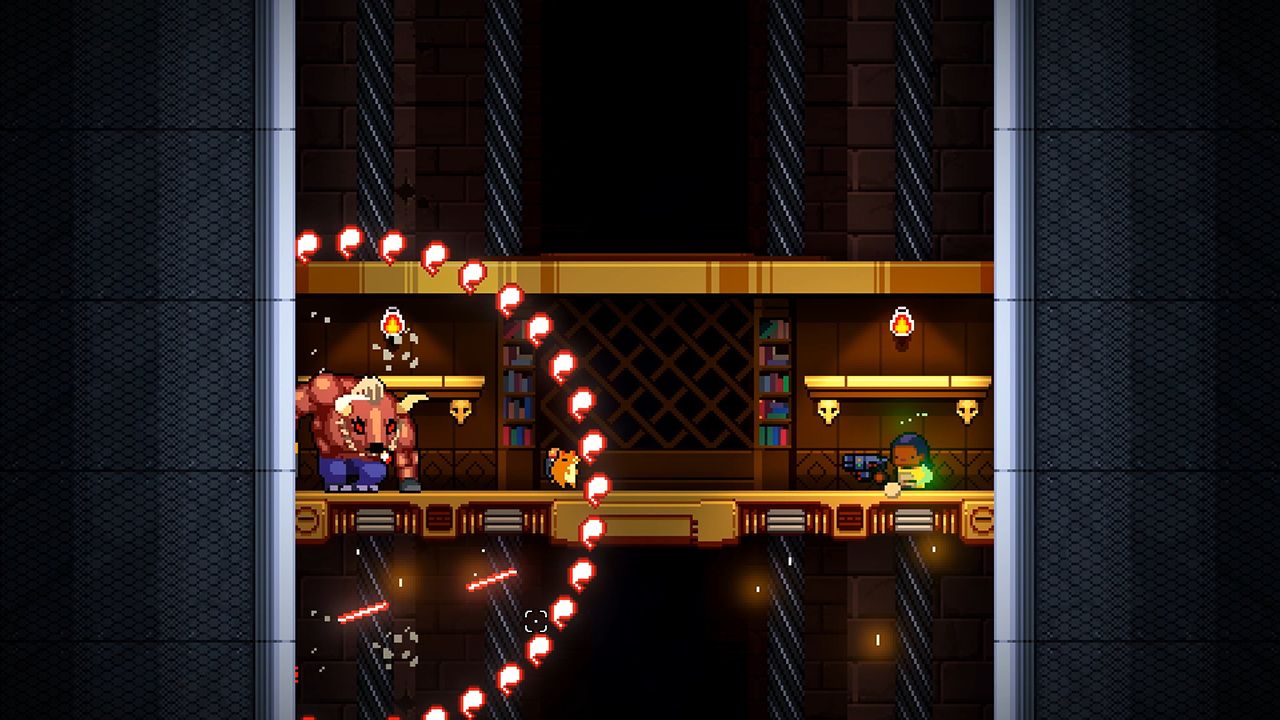 Unlike a game such as Contra where you can pick and choose the weapons you have by choosing to get a weapon drop or not, Exit the Gungeon makes you constantly change weapons. Every 10-15 seconds or so will bring you a completely different type of weapon, with some definitely being better than others. This may mean you will go from dominating to just dodging constantly while dealing minimal damage. It was great to see the large arsenal of weapons carried over here, but the pace of this game is not suited for some of the guns that were carried over.

Exit the Gungeon is structured differently as you go throughout, with some set locations that lead you to other random stages as well. While in the elevator itself, you will have enemies appearing from all sides trying to take you out. Occasionally, you will find yourself in a different room that you must clear to receive a reward along with a way out. Each area will then culminate in a boss battle that will change almost every time, which do definitely present some challenges. Some of the bosses are easier than others, with the tougher ones quickly ending some of your best runs and leaving you yelling at the screen. 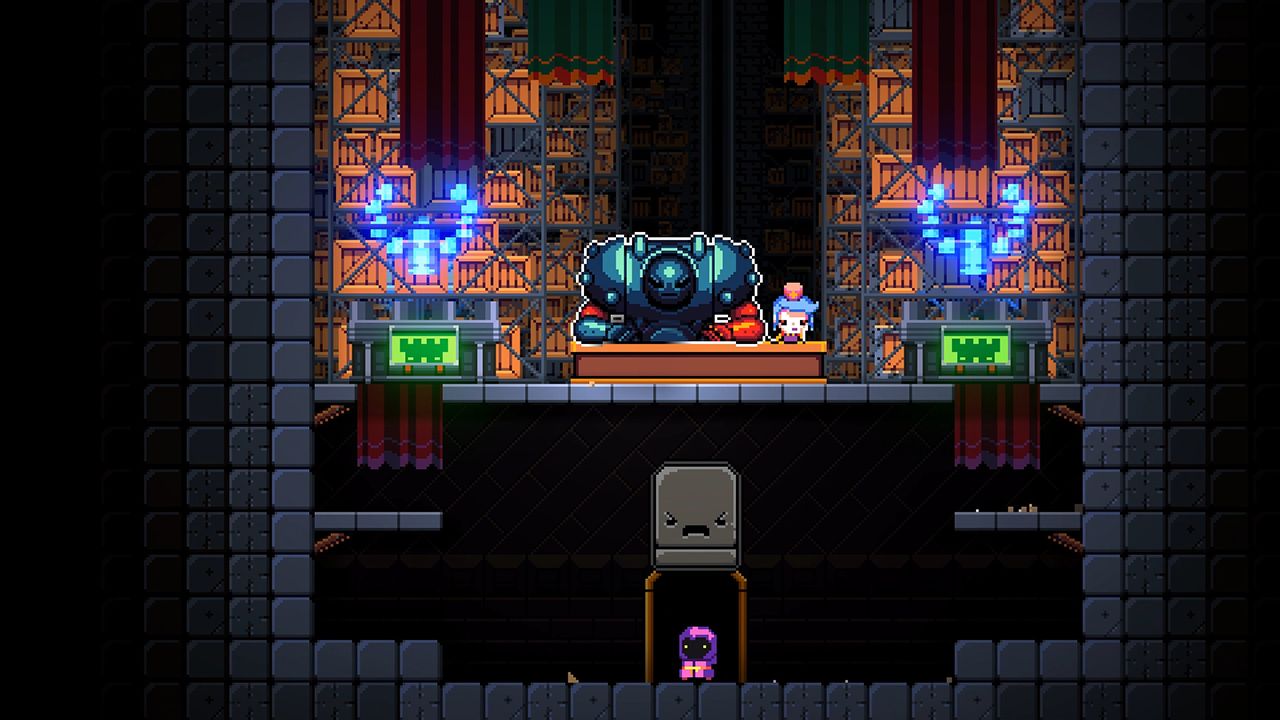 After defeating a boss, you are taken to a rest area that lets you spend your money you’ve earned on either upgrades for that run or new weapons that will be available in future runs as well. This is helpful as a way to keep pushing and pushing to make it further up the elevator and closer to an escape. This is not a checkpoint by any means though, as you will have to start back at the beginning every time you die in the game.

Enter the Gungeon was one of the better received indie games over the last few years and it is no surprise that Dodge Roll was able to carry over some of that magic into the spin-off. The roguelike structure works well here again with the enemies to make every experience unique, but the quick switching of guns in this style of game feels a little too jarring most of the times. As long as you can persevere after each time you die and keep attempting to survive, you will eventually Exit The Gungeon.

Now with much more precise controls than its original release on iOS, Exit the Gungeon is a solid spin-off to Dodge Roll’s indie darling that can often be a little too frustrating for its own good.