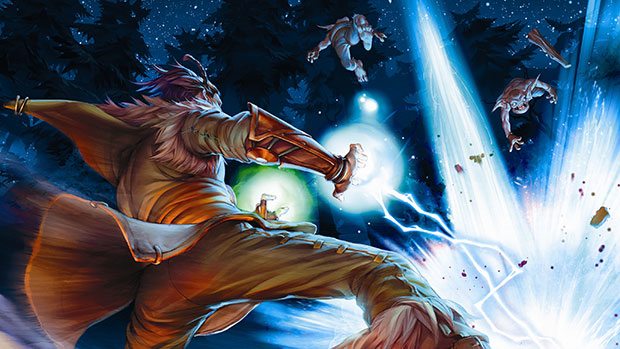 Fable: The Journey is certainly Microsoft’s most ambitious Kinect project to date. Capitalizing on the wildly popular Fable RPG franchise, this iteration of the game takes away the controller that so many fans of the previous games have become accustomed to. Replacing the controller has proven to be a more difficult task than expected with the Kinect. This goes double for games that don’t invovle dancing or exercise. The problem being that some Kinect games just don’t perform very well in the detection department. Controller lacking, what hasn’t been taken away is the playful world of Albion, and the unique presentation that the team at Lionhead Studios is capable of.

In Fable: The Journey players take control of Gabriel, a resident in Albion in an era that is 50 years after the events of Fable III. You are thrust into the role of hero as the events of your adventure unfold. In traditional hero fashion you are the world’s only hope at stopping an all-consuming evil threat. With magical gauntlets in tow, Gabriel learns the use of multiple magical spells, that utilize the recognition commands of the Kinect controller nicely (after a few runs in the Kinect tuning portion of the game).

As is the case with Microsoft’s Kinect games, “You are the controller”. In Fable: The Journey there is no need to pick up the traditional controller at any point in the game. You’ll travel from area to area in your horse drawn wagon, which is completely controlled by the reigns in each hand. Pulling the left and right reigns will allow you to navigate the roads of Albion, swinging the carriage left and right to pick up glowing orbs that are used for upgrades for your character. These orbs are only able to be snagged if your horse is moving at the appropriate speed, so there’s a bit of a gameplay twist to collecting them all. Horse travel can be a bit tricky in Fable: The Journey, especially if your Kinect isn’t correctly calibrated. Oversteering can be a problem, and working out a straight line is a task, if you don’t take the time to configure the camera correctly. The same can be said for the combat in Fable: The Journey. You’ll be using your hands to cast spells from magical gauntlets, block incoming attacks, and use full body gestures to dodge projectile attacks.

Combat in Fable: The Journey is executed with your hands as well, using two powers controlled by each hand. The right hand casts an attacking spell, where the left hand can push enemies back or turn environmental objects against them. The commands are straight forward, aim your hand (palm out) at your target and push towards the screen. With variations on both spells that can allow you to target enemies after the initial cast. When done correctly, it definitely conveys the sense of being there and actually performing these magical acts. Combat is also spiced up with dodging, which is done by leaning to the left or right in your chair. If enemies get to close, you can also raise your arm in a shielding motion to block enemy attacks. Between the combat, driving mechanics, and other inputs for the motion controller, Lionhead really covers all bases from a gameplay perspective, adding alot of variety to the actions you’ll be performing in Fable: The Journey.

While Lionhead breaks the physical bond of the controller and your hands, it also plays on an emotional bond in Fable: The Journey. Your horse Saren is a huge part of this Fable experience. As much as any other character in the game, your horse has a personality that radiates throughout. Showing emotions like pain and elation, you’ll know when you’re doing something that isn’t good for the animal, and when it needs your help and caretaking. Setting up camp, you’ll be given the opportunity to groom your animal, feed it food and drink, and other duties to keep them in good health. It’s a throwback to the interaction that Kinectimals did so well, another Kinect title, but in Fable: The Journey it has bigger gameplay implications.

Albion is a beautiful, colorful world like previous Fable games. It doesn’t have nearly the depth that its RPG bretheren have, but it captures that same magic. While the numbered Fable games in the franchise take a more mature approach to things, its pretty clear that Fable: The Journey is catered towards a younger audience. How young would that be? Well, that’s going to be for parents to decide. It does have meager amounts of blood and violence so depending on what you want your child to be exposed to, even in the smallest amounts, it could be a deal breaker on that front. The game is officially rated for Teens through the ESRB. Overall though, the game seems to have an overwhelmingly positive tone, and a good message. It might be a little too light-hearted for young adults, but probably just right for a lot of the younger audience that hasn’t been jaded yet.

Like other Kinect games, Fable: The Journey runs into the same problems of tracking that others do. It really depends on how dedicated you are to getting it right. The device on a whole isn’t as exact as a controller, and mileage will vary depending on how accurate the player can perform the required actions. If you loosely mimic the motions required for casting a spell, it can be a crap shoot as to where said spell will end up. If you use the correct form, it seems to work very well. Remembering to do this over and over again, is where the problem may lie. All Kinect games have the sweet spot of what the camera can and can not recognize, so as with other Kinect games, practice makes perfect.

A lengthy campaign with a equally long set of ways to utilize the Kinect, make Fable: The Journey one of the most ambitious Kinect titles to date. It doesn’t have much competition when it comes to a story driven experience in this motion-controlled genre, but it’s head and shoulders above anything else out on the platform at this point when you look at the camera recognition, graphics, and overall production value of the game. It’s not going to suit all tastes, but Fable: The Journey should definitely be experienced by those that want to get the most out of their Kinect.