First console or Western game release for the series. 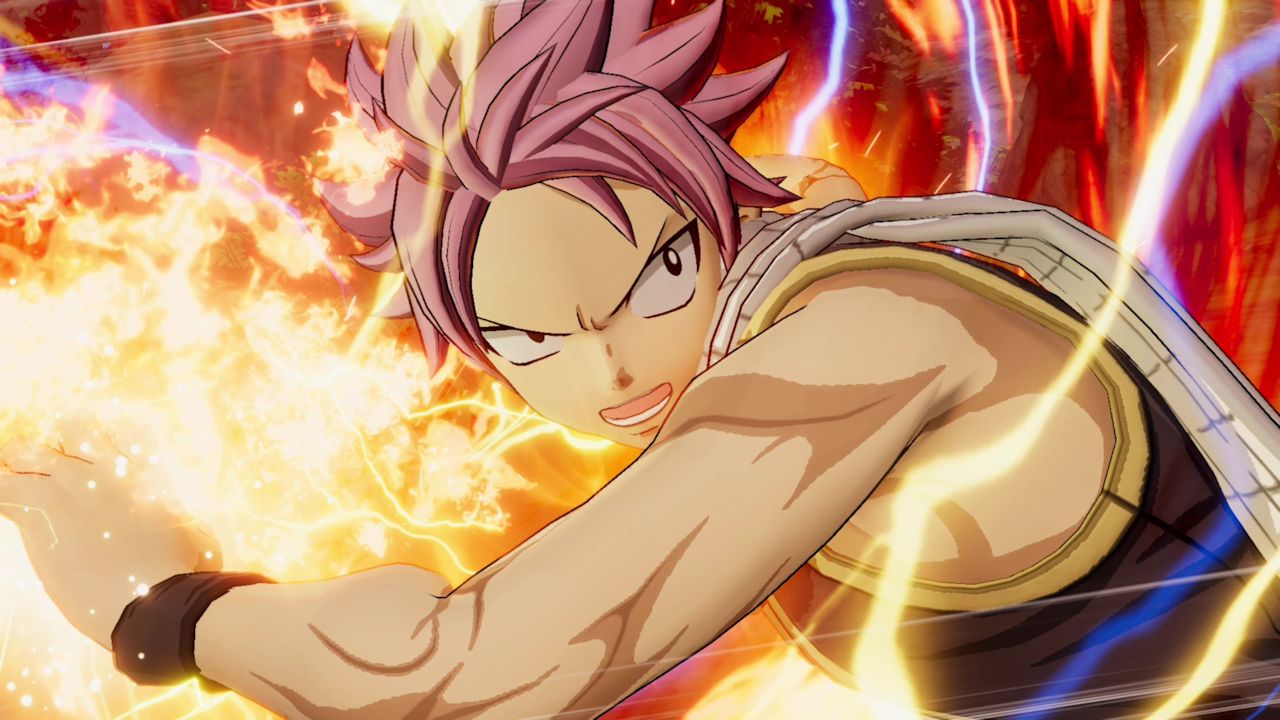 Fairy Tail debuted back in 2007 in manga form before later receiving an anime adaptation, both of which were quite successful. While the series never quite reached the heights of series like Dragon Ball and Naruto, it had a solid fan base and ended up with more than 300 episodes. Even so, video games for the series have been exclusively on handhelds or mobile, with none of them releasing outside of Japan at all. That has finally changed though with Koei Tecmo enlisting developer Gust to create the simply titled Fairy Tail that has some clear inspirations from their flagship series.

For those that have never experienced anything related to Fairy Tail, the basic premise is that Fairy Tail itself is a guild full of wizards that take various jobs in return for payment. The lead characters that are a part of this are dragon slayer wizard Natsu and the celestial wizard Lucy, along with a number of other characters. The series has a large roster of characters, which the game reflects quite well by offering you a number of them to choose from. 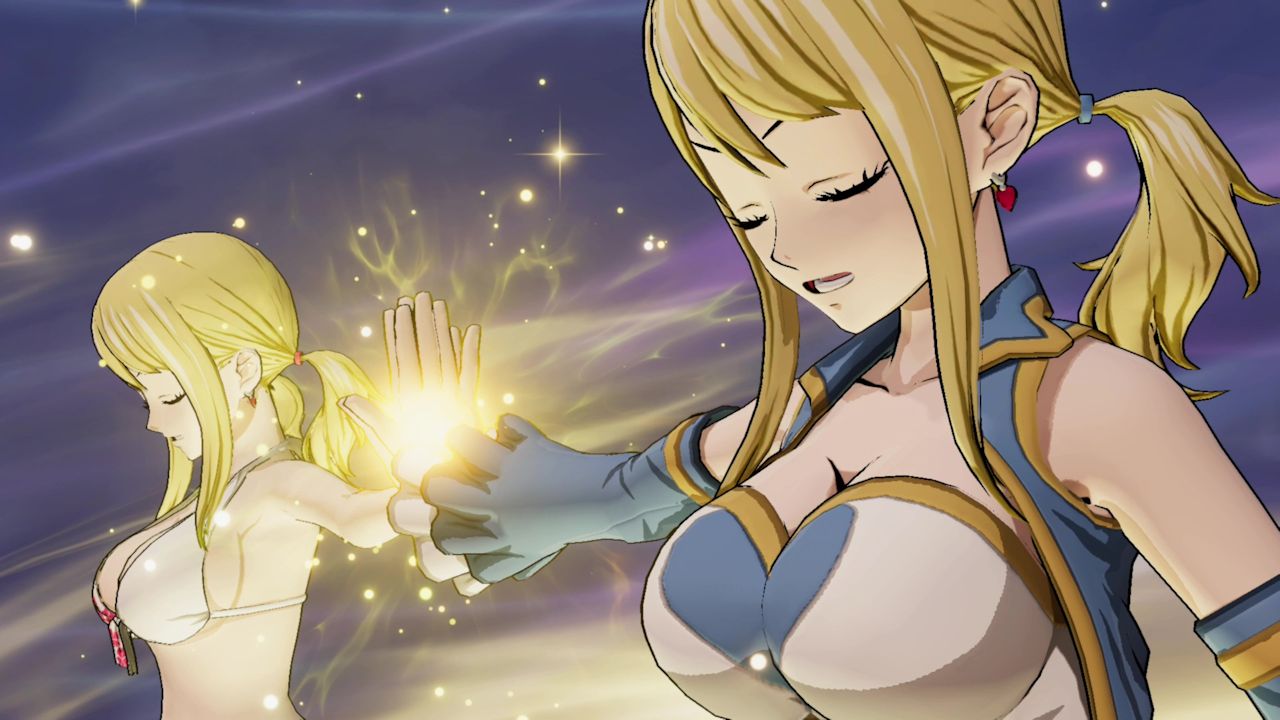 Fairy Tail does not start from the very beginning of the story, but instead picks up with what would be more than 100 episodes into the show. Not only that, but the game begins right near the conclusion of the Tenrou Island arc. This is incredibly confusing at first for those who have never read or watched Fairy Tail, but thankfully it pretty quickly moves to a point where there was a seven year time jump. During this seven years, the lead characters were essentially stuck in stasis. As a result, they return home confused, which is pretty perfect as a jumping on point for the player as well.

Upon everyone’s return, they find Fairy Tail pretty much in ruins compared to where they left it as the best guild around seven years prior. This means that one of the central goals is to return the guild to its former glory, which you can do in many different ways. Each of the guilds are ranked and completing different quests and such help to move you up the ranks. Certain story moments require you to reach specific guild levels, but this shouldn’t be much trouble if you’re doing a lot of the game’s side quests pretty consistently.

Gust is most well known for their Atelier series, which you can tell right away very much inspired this game. In many ways, this game feels like an Atelier game with a Fairy Tail skin laid over it, but with more of a focus on the combat than alchemy. This isn’t exactly a terrible thing though, as it does seem to work pretty well here, though it does lead to some major shortcomings as well. 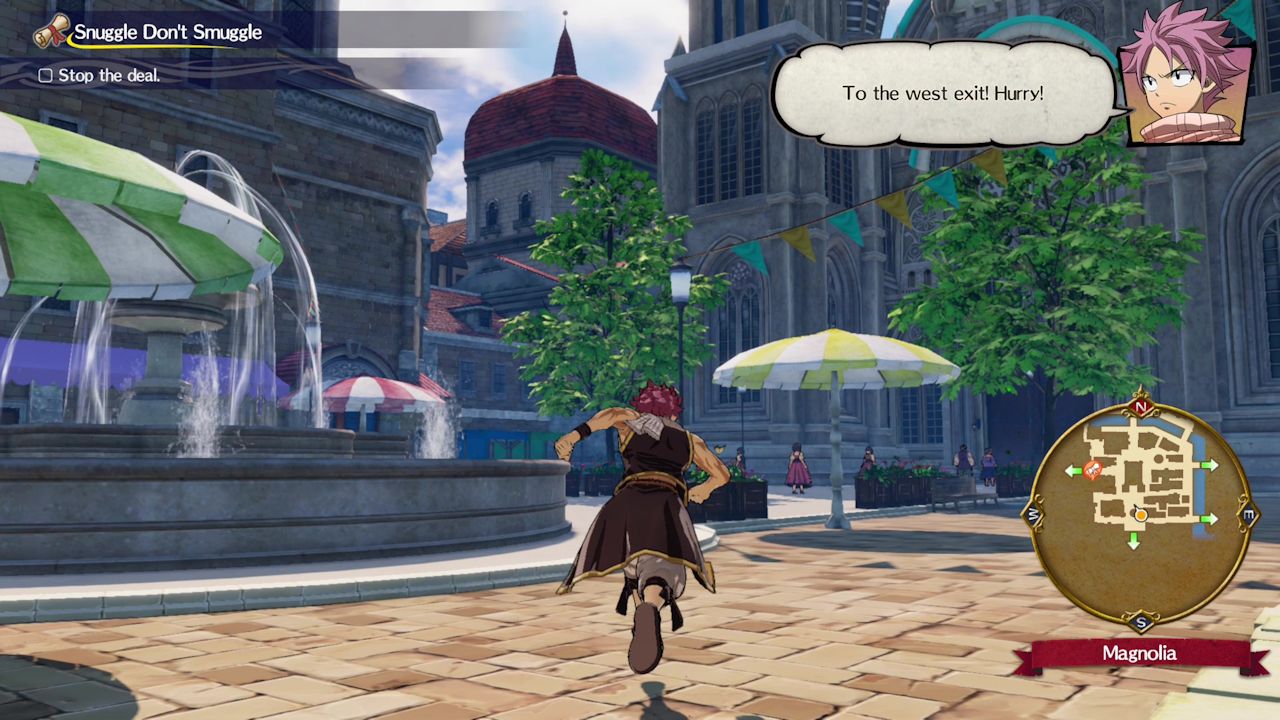 This is seen especially with the game’s map system and travel structure. Like in Atelier, Fairy Tail has relatively small locations that you can travel between either by foot or just by going to a map and selecting them. This extends to the main town of Magnolia as well, which has multiple fast travel spots within it that you can hop between. Having this ability to travel between locations with only a few presses of a button is really nice, especially when you are taking on quest after quest.

Also like much of the Atelier series, cutscenes are few and far between. Instead, most of the dialogue comes in very basic scenes that often cut away from the person speaking to not show them or just outright not show their mouth moving. This is something that has been present in much of the Atelier series, but it would have been nice to be able to experience more of this rich story in a less budget manner.

The game is split into chapters, which are then broken down further into episodes. Each episode has specific story quests that you have to complete to advance to the next episode and eventually to finish the chapter itself. On top of these story quests, there are also side missions known as requests that you can pick up from the Request Board at your guild. Whether it is a main story quest or a request, it will direct you to go to a certain location and complete a task that usually leads to you returning to the guild in the end, with you even having the option to automatically return right away. Sometimes the abundance of requests have a special task, such as recovering a certain item, but most of them are as simple as defeating a set number of a specific type of enemy. Unfortunately, this is also where the repetitiveness of fighting the same enemies over and over again, often in the exact same area, really comes into play. On the plus side, the game’s battle system can be a lot of fun as you are hunting down these enemies.

Fairy Tail features fairly traditional turn-based combat, where each of your party members and the opposing enemies take turns attacking. By attacking the enemy first in the overworld, you will even get a speed boost entering the actual battle itself, though it didn’t really seem to have that much of an impact overall one way or the other. Each character has a basic attack that requires 1 MP to use, which deals very minimal damage overall. Instead, your focus is almost always going to be on the Magic that each character has, as these are wizards after all.

Depending on which characters you have in your party, they will each have their own lineup of different Magic options to choose from, with you obtaining more as they level up. The battle itself is setup in a grid, but not one where you have to move to be able to attack. Instead, each of your Magic attacks has a certain range that may be able to hit one enemy at a time or many more. Certain moves that can hit more enemies will do less damage overall though, so you have to weigh the pros and cons in battle pretty often.

Your party size begins as only three characters, with the roster makeup often being dependent on the current quest. A majority of these allow you to select who you want to use, while some require you to use specific characters or even sometimes only one character period. As you play more through the game, you unlock the ability to have four and even five party members at at time. This is really nice to see, as it allows you to experiment with more of the characters while still keeping some of your mainstays in the lineup that are your strongest. It is also a nice touch that characters not in your party still earn XP as well, albeit at a reduced rate. 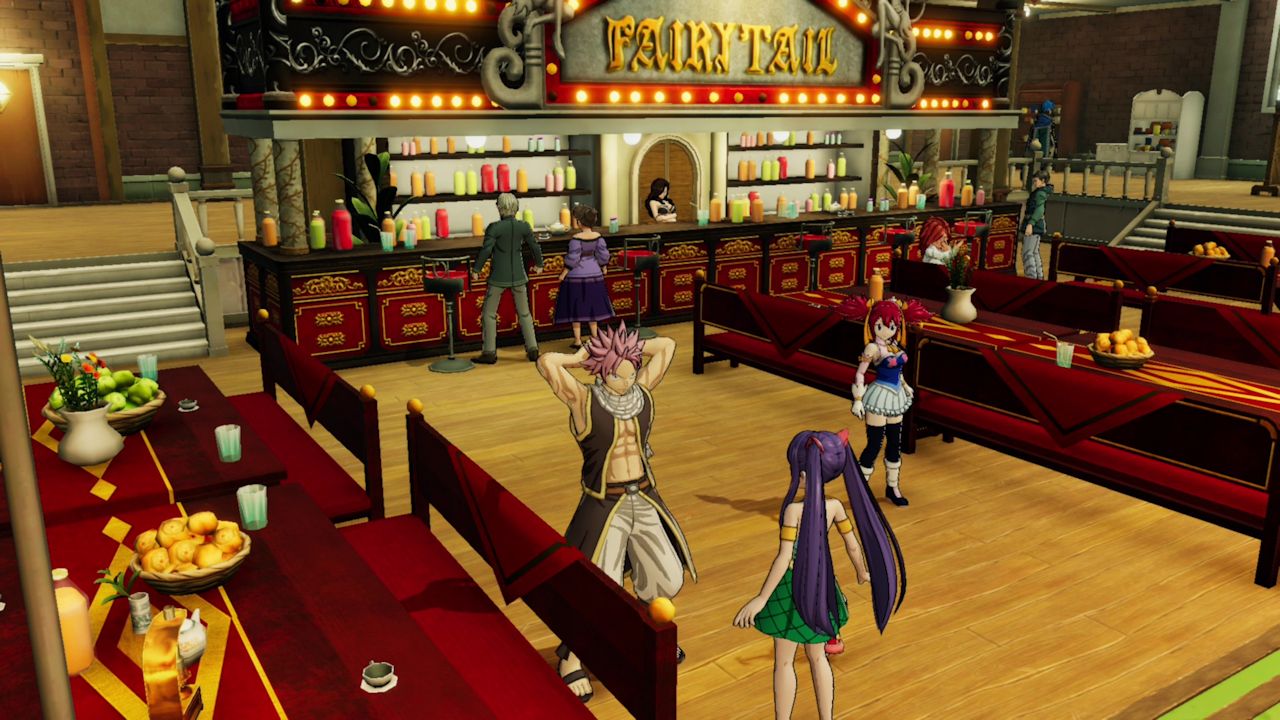 With the many different characters, there are also multiple types of elemental attacks that come into play during battle. Rather than having to guess whether a certain attack will do well against an enemy or not, the game makes it easy for you by telling you when you are choosing an attack. This includes if the enemy is weak to an attack, will resist an attack, or if there will be no damage done at all. Even with you facing a lot of the same enemies over and over, it is a great addition to have in the game to make the combat a little more accessible.

Beyond the Magic that you will be using most of the time, Fairy Tail also has some other abilities that are available to use less often. By filling your Fairy Gauge, you can activate a Magic Chain attack that utilizes your entire team if you would like, which can culminate in a super strong finishing move. Even more powerful than that is the Extreme Magic that you can unlock by raising your guild rank, which will bring in some help from others like Makarov. Probably the most useful of these though is the Awakening Gauge, which you can either activate for a boost or use part of to activate special follow-up attacks.

Building back up Fairy Tail plays a big part in the game, with the Guild Ledger being the hub for this. From here, you can upgrade the Guild itself, including the Item Shop and Laboratory. Finding special items allow you to upgrade these facilities, such as adding new items to the Item Shop. It is also possible to remodel each of these by handing over specific materials to obtain additional perks related to each. 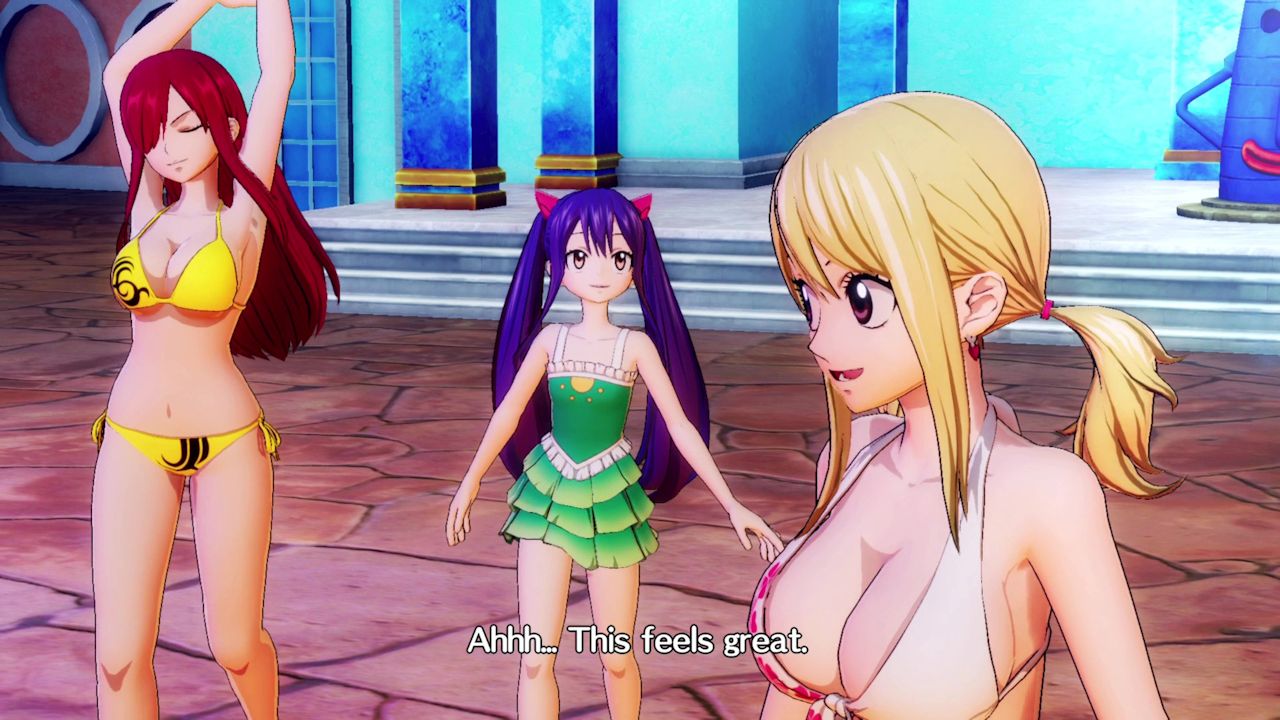 The Guild Ledger also allows you to upgrade Character Ranks by expending Fairy Points, which give them more abilities or outfits to use. Additional Character Rank slots can be unlocked through what are known as Character Story quests, which are fun little character building moments that help you to get to know some of the characters. Using two characters together in a party together often will also increase their Character Bonds, which can provide some fun character moments and bonuses as well.

Rather than create a new foundation from the ground up, Gust very clearly took the structure of their Atelier series and carried it right over into Fairy Tail. This does lead to a very repetitive and limited mission structure most of the time, but the old school style combat feels just right here around an enjoyable story. While definitely geared more towards fans of the series, Fairy Tail is a decent RPG at its core in the first console outing for the franchise.

Fans of the franchise that have been longing for a full scale game based on the property should be somewhat satisfied by Fairy Tail, although a lot of it is heavily inspired by Gust’s flagship franchise.