The latest news in the world of video games at Attack of the Fanboy
August 23rd, 2015 by Emily Speight 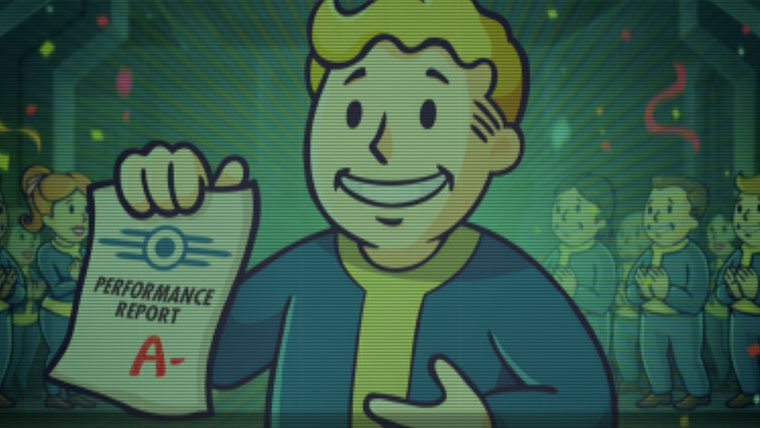 Fallout Shelter was one of E3’s surprise hits. As a management title set in one of Fallout’s iconic vaults, it quickly gained a massive following, many of whom clamored for an Android release. Last week they were granted that wish, along with a patch that brought the game to version 1.1. We took a look at the game soon after its release, and have returned for a round now that it has had time to settle and mature.

As previously noted, there’s no real story for Fallout Shelter beyond a premise. You are placed in the role of Overseer and tasked with building and expanding an underground Vault while managing the needs of your Dwellers and negotiating disasters as they arise. The update adds nothing to this, and this is perhaps wise — a quick search will net you hundreds of comments, posts, and lists chronicling the messed-up antics other Overseers have gotten up to. The game has some replay value in attempting to replicate these or coming up with your own, but only devoted fans will want to slog through the early parts of the game more than a handful of times. 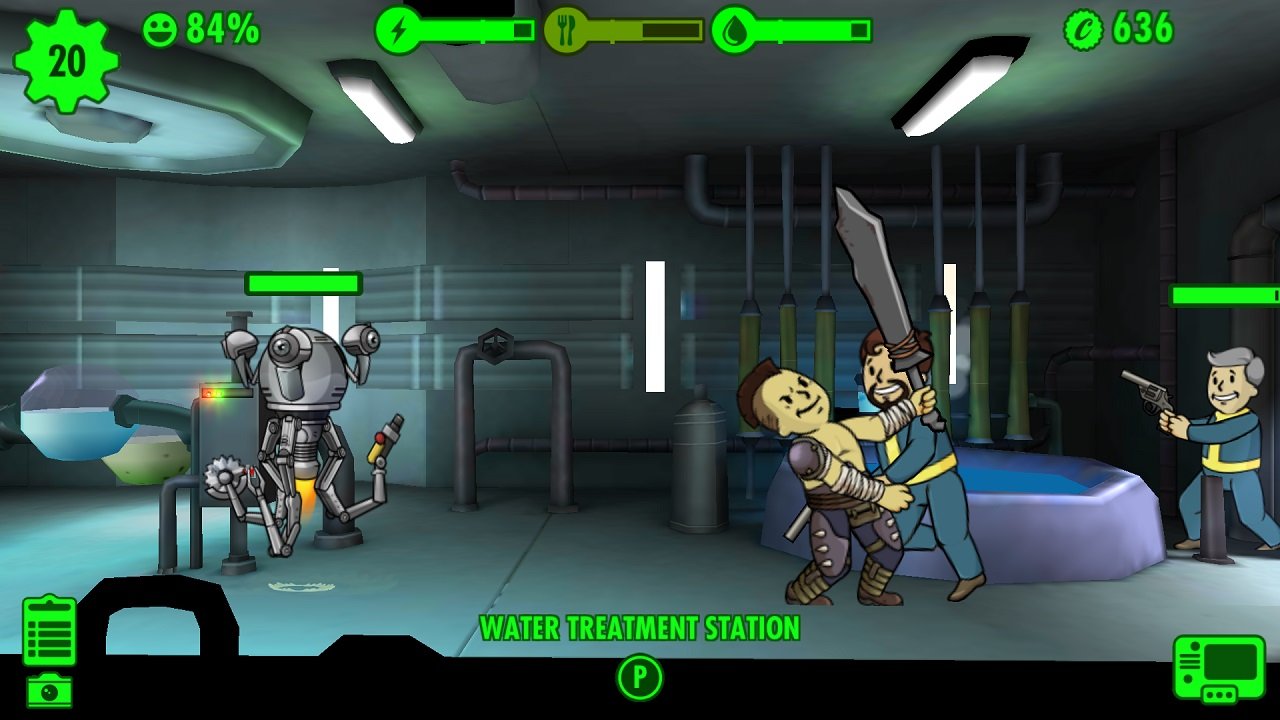 Resource management is surprisingly brutal in the early game, and this is where Fallout Shelter masterfully puts the hard sell on its purchasable lunchboxes. With a Vault full of starved and irradiated Dwellers, whose production is impeded by their unhappiness — which stems from their poor health, a few dollars to save a crashing Vault suddenly seems reasonable, doesn’t it? A lack of energy bars or other paywalls makes this purchase a truly optional one that is nonetheless tempting to make — especially as Fallout Shelter has issues with its pacing.

Even if you only check in once a day, you’ll find yourself left with relatively long stretches where there is nothing to do. The rush mechanic was obviously designed to counteract this, but its use is limited by a sharply rising chance of disaster, making it too risky after one or two uses. Collection events occur at intervals too short to be constant, but too long to make closing or minimzing the program worthwhile. There’s a surprising amount of time spent simply looking at the screen, waiting for something to happen. Later into the game, this picks up as resources flow faster and projects begin to become viable. 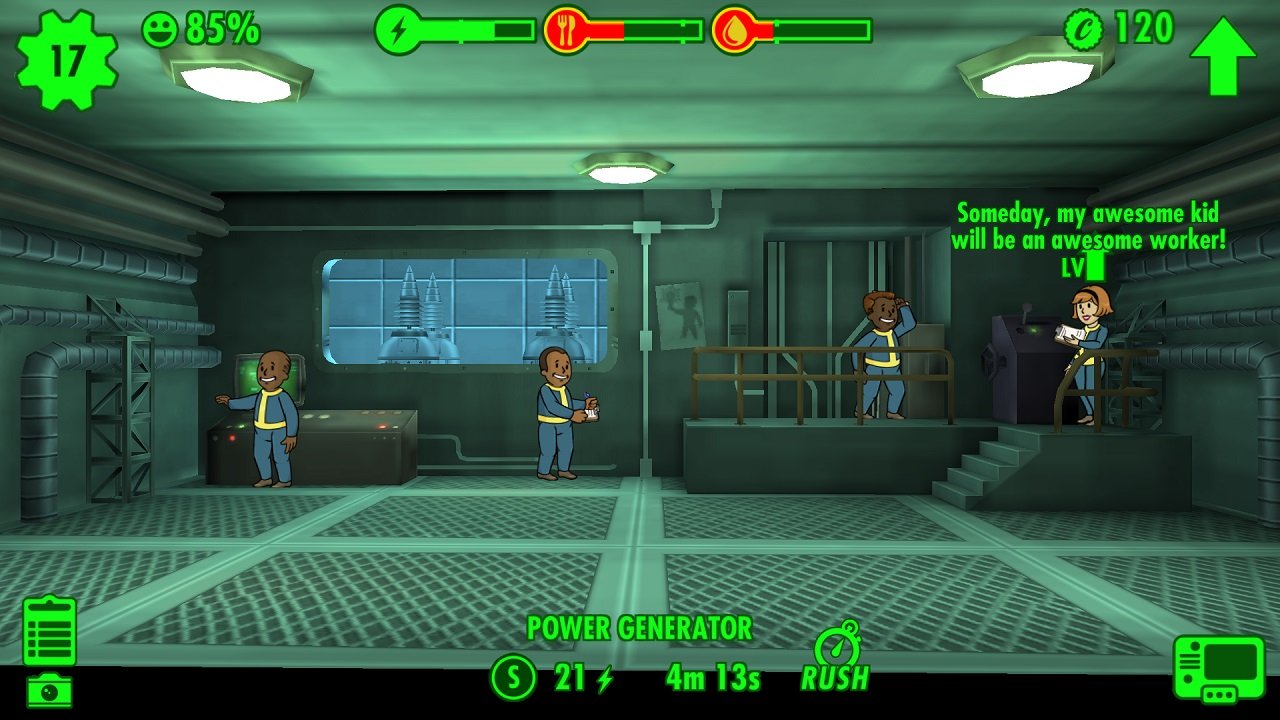 Perhaps the best addition to Fallout Shelter so far is Mr. Handy, a butler-like robot who assists in resource collection. He roams from room to room across a single floor, collecting resources automatically, but his penchant for one-liners and skill in combat are far more useful. Mr. Handy can be used to dispatch Raiders, Radroaches, and other unsavory visitors to your Vault. He can also be sent out to the Wasteland — which is impractical, but also funny and therefore a highly advised course of action.

Aesthetically, it’s fantastic. Fallout Shelter’s blend of 2D Pip-Boylike characters and 3D environments is an instantly distinct look. Combining it with its retro soundtrack ensures that Bethesda have absolutely nailed the atmosphere for this game, and it’s delightful. The graphics also scale surprisingly well to a smartphone. Double tapping to magnify is simple. Dragging to navigate on a smartphone screen often ends in accidentally picking up an unlucky Dweller, but they are easily returned to their original station by dragging them back to their highlighted silhouette. 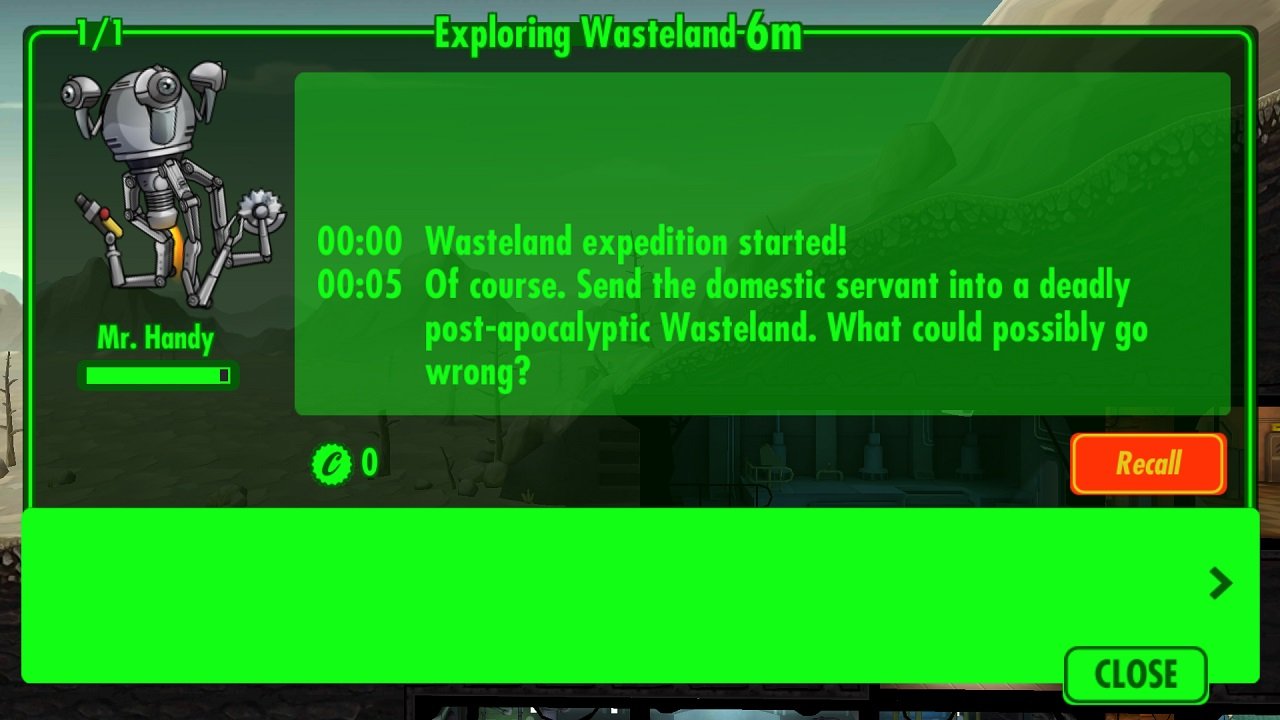 Fallout Shelter lacks a real endgame. Where do you go after hitting the maximum population of Dwellers? There’s some value in optimizing your Vault’s layout or improving your Dwellers… or as mentioned above, finding creative ways to dispose of them, but outside of that there is very little to tempt a player to keep coming back.

Fallout Shelter is an enjoyable but ultimately shallow experience. It’s set apart from others of its ilk by making its transactions truly and completely optional — though sorely tempting.