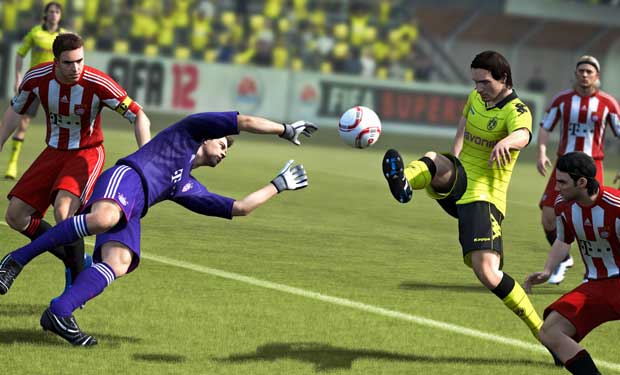 When soccer fans call it the “Beautiful Game”, they do so for good reason.  A sport that has so many moving parts coming together like a well choreographed ballet, has never really made the jump to the video game world with the nuances of its real life counterpart.  There’s been a push in recent years on all fronts to bring the most realistic recreation of the sport, and bottle it for fans around the world.  EA has been on the forefront of this push, and FIFA 12  might just be their best attempt ever.

The FIFA series has never been a “bad” game.  You can ask the millions around the world that make this franchise one of the best in video games, and they’ll answer that for you.  EA has done well to recreate the excitement of the game over the years, but there have been somethings missing.  With their newly aligned commitment to delivering the most realistic physics in sports gaming, we’ve seen that the NHL and NFL franchise being overhauled to mimic their respective sports more closely. Such is the case in FIFA 12 as well.

The refined Player Impact Engine makes the impact that EA was hoping for in FIFA ’12, giving the game a much more grounded and true to life feel.  The first time you jockey for position or battle for control in FIFA 12, you’ll find that there is a much deeper element at play here, when it comes to the physics behind the game.  Better touch controls for dribbling and passing are juxtaposed with the new tactical defending options at your disposal.  This makes the game feel more like a real soccer match than a button pressing contest.  Add in the fact that the A.I. has been tweaked to give the computer controlled players a new “Pro Player Intelligence” feature and you begin to see that EA has made a clear commitment to delivering the most realistic experience to date.  Most importantly, these aren’t just marketing points on the back of the box.  They are real, tangible differences that can be noticed in the gameplay, and will change the way that you play FIFA altogether… if you know what’s good for you.

Though these new features don’t sacrifice the fun that FIFA games have delivered in the past.  Goals are still a wonder to produce, but because of the way that the game flows, they are much more rewarding when a well designed play works out.  Soccer minded gamers will notice that there will be many more opportunities for goals as players run more logical lines.  This sets you up for better, more realistic scoring chances than in the past. This plays a stark contrast to the traditional “tricks” that have worked in previous games.  On the defensive side of the ball, you can call defenders to attack the ball without the need to break formation.  This allows you to hang back, keep form,  and allow the CPU to attack the ball on command, from the better position.  With better jockeying when you do cover the ball manually, there feels to be a much better system in place for positioning and spacing.  The game still lets you take gambles in challenges, and you’ll pay for mistiming, but it’s going to be a conscious decision that you make and not one that feels forced.

Off the pitch, FIFA 12 has plenty to offer by way of new features.  The game has something for every palette in form of gamemodes, and a handful of notable new inclusions.  One being the new EA Sports Football Club, which lets players earn experience points, and level up to build their status in the FIFA community.  You’ll be able to track your friends accomplishments within the game, and share yours with others.  Integration into the world of social media, you can share your FIFA triumphs with your Facebook friends as well.  Alongside the new experience driven system, you’ll also be able to represent your favorite soccer club and compete against rivals.  Virtual points are earned by all players that use a specific club, and all clubs are ranked on a weekly basis, resetting at the end of each week.  There’s plenty to get into in FIFA 12 whether you just enjoy playing local exhibitions, taking it online for the traditional style match, the online clubs,  or head to head seasons, it’s all back in full force.

Included in this year’s game from the get-go, is the FIFA Ultimate Team, and to those that have played the mode in the past, you won’t be disappointed.  It’s far and away one the best parts about FIFA 12, and I think that EA has seen that this is something that the fans wanted as a mainstay, since the release of UEFA back in 2006.  The mode which will have you building the ultimate club by earning points, and spending them on card packs.  Each pack will include players of varying positions and proficiency, as well as trainers, and boosts for your squad.  You’ll earn the necessary points to build your squad through single player only matches, or face-off against other squads in the online network.  It’s the mode that keeps on giving as trying to build the ultimate squad and tinker squad chemistry is quite fun. Add in the luck of the draw aspects and competitive online features, and this mode could keep you busy until FIFA 13.

Of the many things that FIFA 12 added into the formula this year, thankfully they did not disregard the presentation aspects of the game.  The package is a familiar one, but one that has had some serious considerations put into it to make it shinier and more slick than ever before.  The music selection is an eclectic variety on its own, but add in the polished new user interface and official licensing, and any soccer fan won’t mind having this as their screensaver while in-between games.  On the field, there are less differences. While the play has changed considerably, and the graphics have a better level of detail, on the default camera you aren’t likely to notice many of the subtle changes.  The player likenesses are better than they have ever been, whether its in the cut-scenes or goal celebrations, but I can’t say the same for the crowds.

There’s very little to complain about with FIFA 12.  With so many things that could have gone wrong with the implementation of these new game play mechanics, it’s actually surprising that it all fits together so well.  Sure, if you’re an old hand at FIFA games, you may feel a little pressured to change the way you play.  But the awkwardness only lasts for a short time before you “see the light” so to speak.  You may notice some off-beat commentary at times, but nothing that really stands out as more than just the occasional error in logic on the announcers part.  Depending on how judging your eye is, and your expectancy for graphical improvements in yearly franchises, you may feel a bit neglected by FIFA 12’s visual package on the pitch.  It feels as it has for the last three or four renditions, with only subtle changes made to the actual graphics.  Though new animations liven up the action quite well as a direct result of the Player Impact Engine.

Worthwhile changes to the gameplay enhance the overall experience in FIFA 12. Spilling over into all facets of the game, both old and new, the gameplay has never been better. It’s not going to win you over with it’s looks if you weren’t already sold, but the more realistic recreation of the game at hand will have you forgetting all about that.