The latest news in the world of video games at Attack of the Fanboy
September 29th, 2012 by William Schwartz 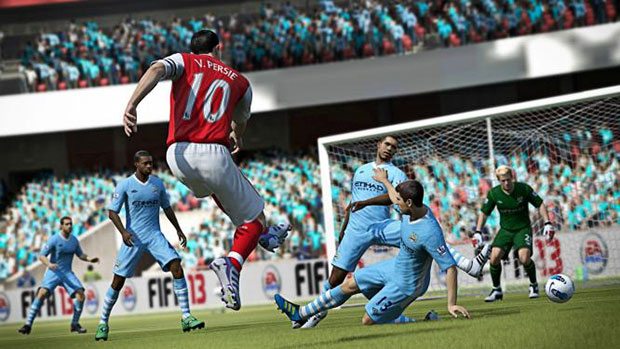 Last year EA Sports stepped their game up on the soccer front with a revamp of their FIFA Soccer product in FIFA 12.  Paying close attention to the intricacies of the sport and the way it is actually played, EA raised the bar in terms of AI, giving the game a more natural flow in the process.  With another year in the books to fine tune their product, FIFA 13 is on store shelves, and it arrives with a nice new set of features to complement enhanced gameplay and an even sharper version of its AI.

On the pitch, FIFA has seen some considerable changes to how the game looks and plays.  Player models are once again in top form, but the way that they interact with each other on the field, and more importantly the ball, is better than ever.  Bringing a sports game to life is not an easy task because the essence of sports lies in their randomness.  That said, EA has tried to capitalize on this randomness with new “First Touch” controls, which gives the game an unprecedented level of realism.  First touch creates uncertainty in the way that players make plays on a ball.  Players will respond differently to poorly made passes, different pass trajectories, and defensive pressure, which gives each battle for the ball a unique feel.  The end result is that you rarely ever see the same play twice, because when combined with the smarter AI in FIFA 13, you’re seeing plays unfold as if they would in an actual soccer game rather a digitalized version of it. 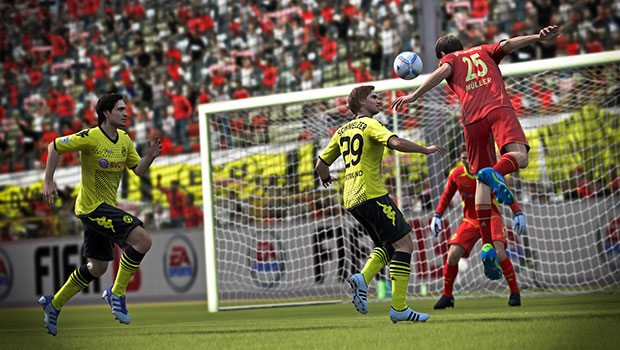 Described as a “positioning intelligence”, the new attacking AI just seems smarter in this edition.  You don’t have to play very long to see that computer teammates are making smarter cuts on the field, and opening up scoring opportunities that just didn’t exist before.  Where previous games had been cross heavy affairs, FIFA 13 allows you to experiment with different styles of play and break down defenses in creative and random ways.  Part of the first touch controls scheme also relies on player stats to determine the outcome of a pass or loose ball.  Tagging your star player with a pass in the Goal Box, you’ll more than likely be able to tell that its him because of the way he takes in the ball and is able to ready himself for a scoring opportunity right away. Where less skilled players may fumble a ball while the defensive pressure is higher.  Having played every FIFA title this generation, its pretty safe to say that on the field, FIFA 13 feels better than any of the previous titles, and EA is approaching mastery on the soccer front if they’re not already there.

With so many new features,  FIFA games have gotten understandably harder to master.  The element of randomness has forced players to rely on strategies more than ever before, and EA has added new features that allow players to hone their craft before heading out to the pitch.  Skill games are one new addition that have been sorely missed.  Akin to the Madden NFL training modes from years past, FIFA’s training modes will post dummies to help you master the art of a free kick, place targets in goal to help you sharpen your accuracy, and other mini-games that are not only fun, but completely addictive and challenging at their highest levels.  Free kicks have also seen new features included that add a layer of strategy by allowing players to control secondary units.  This allows for one touch set ups and numerous other tactics which can be mastered in the training mode.  For Xbox 360 players, FIFA 13 introduces a new Kinect functionality that is also very similar to what Madden NFL 13 did this year.  Utilizing the voice command functionality of the device, you can direct players by voice, adding a new layer of gameplay to the already robust feature set.  The Kinect works well at utilizing voice commands, and it appears that the device has finally found great use for the core gaming audience. 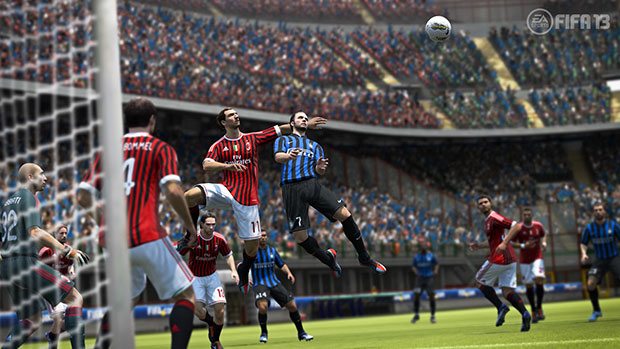 Feeling so good on the field, it only makes it sweeter that there are so many ways to play FIFA 13.  It’s hard to pop in the game and not be overwhelmed with the massive set of options and modes to explore.  Of course there’s still the ability to play your standard games with friends or career mode offerings, but your circle of friends gets exponentially bigger when you take to the online world of FIFA Soccer.  Enrolling in the EA Sports Football Club allows you to earn rewards to unlock items and increase your club’s status as you climb the 100 level gauntlet.   The RPG elements of Football Club have been refined, giving you all the more reason to keep grinding you team to perfection.   Kits, Celebrations, and other unlockables are all up for grabs, and the more points that you earn, the more bonuses you can add to your team.  Real world news is piped into the game’s user interface and connects soccer fans with the teams they love through “Match Day” features.   Keeping track of how teams are performing in the real world allows EA to push these statistics to FIFA 13 players, and you’ll see ratings shifts on the virtual pitch, injuries, suspensions and other vital stats mirroring the real leagues, players, and teams from around the world.

The popular Collector’s Mode “Ultimate Team” returns again, and allows you to buy and trade players to build the Ultimate Squad through earning coins and purchasing card packs. The mode allows you to compete in online seasons, play against friend squads, and is chocked full of micro management tools for you team like the auction house.  The mode which has been daunting for newcomers in the past has a new “icebreaker” mode which allows newbs to jump in and learn the ropes of ultimate team before heading out into the cruel and competitive world of FIFA online. All of these modes can be managed from your FIFA dashboard, but since you’re not likely to be sitting in front of your Xbox 360, PlayStation 3 or PC all day long, a mobile app has been included which allows you to manage your Football Club identity, friends, and Ultimate Team.

While these two modes will likely see alot of fanfare this year because of their sheer depth, the tried and true traditional FIFA experience is still strong underneath it all.  You can still go head to head with friends locally, play in online seasons, and play a career as a coach or created player.  Standard online matches and lobbies are still a big selling point for FIFA fans despite the inclusion of so many new ways to play, but Online Friendlies are still a quick way to get your FIFA fix in a pinch.

Last year was a big leap for the FIFA franchise, and this year is more of a hop.  For year after year fans, the differences are going to be subtle yet very impacting on the soccer experience.  First touch is a welcome addition, and the sheer amount of career, manager, and fantasy modes is more than a year’s worth of content in my opinion.  More than a roster update and less than a complete overhaul, FIFA 13 hits the sweet spot yet again for soccer fans in 2012.