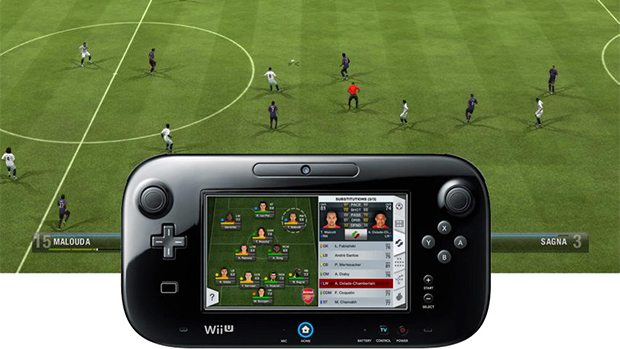 You may have heard how great FIFA 13 is on the Xbox 360 and PlayStation 3. The annual soccer franchise launched with a host of new features, enhanced graphics, and improved intelligence engine on those platforms. Unfortunately, EA’s first crack at FIFA Soccer on the Wii U is not this game. In fact, it’s a bad port of FIFA 12, which is a big letdown for soccer fans looking for a comparable experience on the new console. Differences from other consoles aside, FIFA 13 on the Wii U is the first high definition soccer experience for Nintendo fans, and the best that the franchise has ever been on this platform.

The differences are subtle, but the huge advancements in the virtual sport this year are sorely missed on the Wii U. The lack of the addicting Ultimate Team and Football Club modes leave the game feeling less full than its Xbox 360 and PlayStation 3 counterparts, and the game seems to run on an older version of the FIFA Engine, which doesn’t have the same realistic effects. So what does FIFA 13 have on the Wii U? Well, it’s got a current roster for world and club teams, and some hit and miss applications with the Wii U GamePad. It’s still incredibly fun to play with friends, either locally or online, and runs well while working with this feature set.

While the game might not be as full featured as other versions, it does do things that others don’t. This is mainly attributable to the Wii U GamePad, which doubles as a manager’s clipboard while on the pitch. You can formulate strategies, substitute players, and ramp up aggression at the touch of the screen. It’s quick access to all the things that you’ll find in the game’s traditional pause menu, and making good use of the GamePad options keeps the game flowing nicely, eliminating unnatural pauses and breaks in the action.

The GamePad will also allow you to give on the fly direction to players. You can set up plays and direct traffic by swiping the GamePad’s Touchscreen, and it gives you a great deal of freedom when on the attack. The problem with this style control is that it’s hard to actually pull off. Defending players will swoop in and steal the ball from you if you aren’t careful. It’s a great idea, but it’s just really hard to execute on a consistent basis. Similar functionality on the GamePad allows for the aiming of shots and passes by using the touchscreen, but fall into the same problems. While using the GamePad for precision accuracy, you’re always left at a disadvantage because you are basically taking your hands off of the other controls. Eventhough it’s only for a brief moment, that’s all that’s needed to completely blow up the play.

Being that this is Nintendo, teaming up locally with one person using the GamePad and another using the Pro Controller is recommended, and is some of the most fun to be had in FIFA 13 on the Wii U. With one player manning the controls on the touchscreen and the other controlling the on-field action, there are some great times to be had playing in this manner. It’s definitely a break from tradition for FIFA soccer, but one that definitely shows the potential of local cooperative play in sports games on the new console.

These touchscreen features are entirely optional, and the game plays quite well with either the dual analog set-up on the GamePad, or the Wii U Pro Controller. If you haven’t had the opportunity to play this year’s FIFA 13 on other platforms, you likely won’t miss the game’s many new features, as the action on the field has the distinguished feel and craftmanship of a FIFA title. That means there’s a lot of action and animation in FIFA 13 on the Wii U, solidified by fine-tuned gameplay that is above all else, fun. Looking at the Wii version, FIFA 13 on the new console is light years ahead of anything that has been done on a Nintendo console, it just happens to feel stripped down when compared to other versions. Though all the essentials to have a good time are here. Online Seasons and Friendlies allow you to engage the growing online community, and offline you can play exhibitions with friends or take on player or manager roles in the Be A Pro careers mode.

Honestly it’s hard to tell if the Wii U’s online community could even support some of the more ambitious online community features that FIFA 13 sees on other platforms. The community is growing, but still quite small in comparison to others. Regardless, FIFA 13 is lacking a lot of the cool features found in other versions, and trades them in for things unique to this platform. You might get a kick out of the uses that EA has found for the GamePad, even if they cost you a game or two in your FIFA career. But FIFA 13 is a nice start for the franchise on the Wii U, even if it’s slanted more towards those that are looking to play locally with friends.