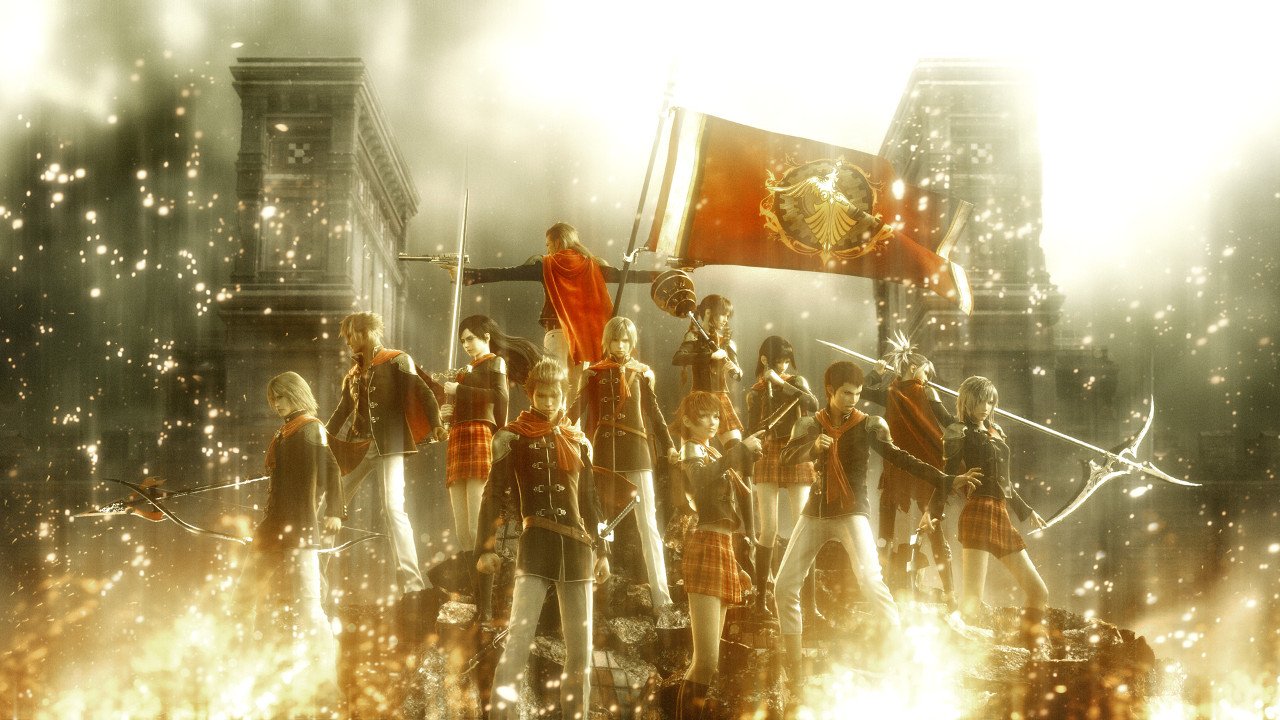 Final Fantasy Type-0 made its debut in Japan nearly three and a half years ago, exclusively for the PlayStation Portable, but showed absolutely no signs of making its way West until E3 2014. Choosing to forgo the portable PS Vita that many expected it to be ported to for a release outside of Japan, Square Enix surprised everyone with the reveal that it was coming to the now current-gen PlayStation 4 and Xbox One. Finally arriving in the US as Final Fantasy Type-0 HD, this game offers gameplay more akin to the Kingdom Hearts series while also still feeling definitively like a Final Fantasy game.

Typically a series of unconnected games with similar tropes and themes, Square Enix went with a much more ambitious approach under what they called Fabula Nova Crystallis: Final Fantasy, which was a series that was set around the same mythos. The Final Fantasy XIII series was the start of this, with Type-0 and the upcoming Final Fantasy XV continuing the trend. However, outside of a few connectors like the l’Cie, it is its own separate world in the vein of past Final Fantasy entries.

The Final Fantasy series has always boasted strong story telling first and foremost and Final Fantasy Type-0 HD maintains that high quality throughout. Focusing around 14 young warriors that make up Class Zero, this title features more of a militaristic presence than most games in the franchise. In many ways, this also brings gamers one of the most adult Final Fantasy entries to date, which is fitting for the first Mature rated game in the franchise.

The violence is pretty intense at times, with characters being gunned down, or worse, fairly often during the game, but the deep and very well-crafted story full of mystery, betrayal and loss really puts it over the top. Luckily, Type-0 HD doesn’t just add these adult themes into the game for shock value or to attract a mature audience, but rather it feels like a perfectly natural experience in this darker sector of the Final Fantasy universe. 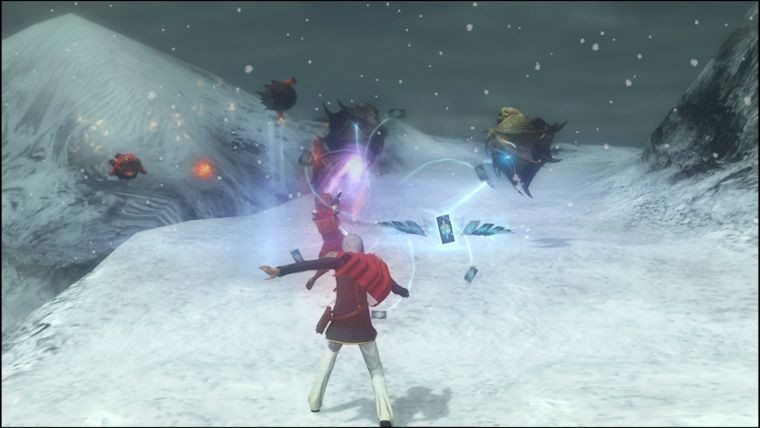 A typical Final Fantasy game focuses around a relatively small team of characters, often times featuring some that rotate out for periods of the game. Type-0 HD greatly differs from the norm by offering the previously mentioned cast of 14 distinct characters instead. Having a roster this large does present some major problems, such as some of the characters feeling underutilized. The story features a major focus on characters like Ace and Machina, which often results in some of the members of Class Zero feeling left out. However, the game does still do a solid job at providing fairly unique personalities for each of the characters despite this, though some are more fleshed out than others.

Throughout the impressively long campaign, you will journey across the turmoil filled world of Orience, which is made up of different regions and towns. However, having been a portable game has hindered the overall exploration elements in some ways. While there are some more richly detailed towns across Orience, there are mostly small area cities that begin to blur together. These towns are typically only filled with a limited number of NPCs that you can interact with as well. Lacking NPCs is a typical problem found with handheld releases, as both Kingdom Hearts: Birth By Sleep and Dream Drop Distance suffered from this issue, but it stands out much more on a console release.

The overall mission structure found in Final Fantasy Type-0 HD is also influenced by its portable history, with the game separated across numerous chapters. Seemingly built for a pickup and go experience on a portable platform, the game still feels right at home on consoles in this department, for the most part. At the start of each chapter, you will be given a new mission and a countdown until it is time for the mission itself. The countdown is not actually timed, but by talking to specific people with exclamation points over their heads, the timer will go down by two hours each time. Most of these interactions are simple talks that result in receiving an item, but it would have been nice to see them expanded upon a bit more in the console releases.

The type of gameplay found in the Final Fantasy franchise has been constantly changing over the years and Type-0 is the epitome of that evolution. Shifting back and forth from turn-based to real-time battles in more recent years, Final Fantasy Type-0 is most similar to the gameplay found in another side game, Crisis Core: Final Fantasy VII, as well as the somewhat spinoff Kingdom Hearts. The roster of 14 characters greatly shakes this up though, as within the missions you will get to choose just which characters are in the main party, which usually consists of just three members. 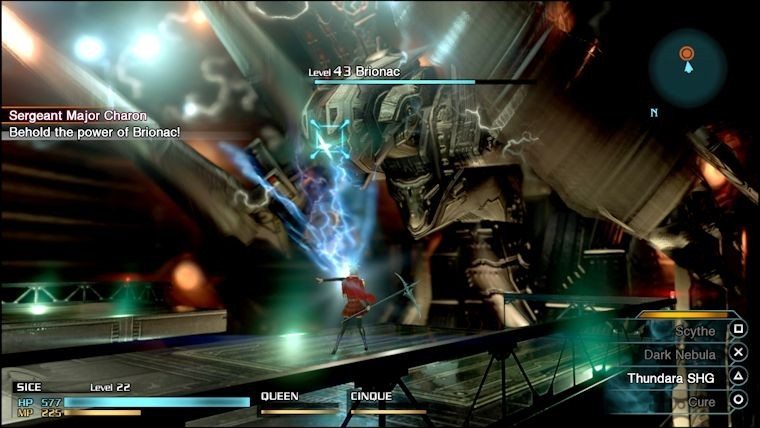 Fans of the Monster Hunter series may surprisingly find the character options familiar, as the 14 members of Class Zero provide a number of different weapons to choose from before battle, ranging from traditional weapons like a spear or sword to more out there options like a scythe or deck of cards. There are some that are relatively similar, but each features a branching tree of abilities that help to set themselves apart from one another.

The missions themselves increase in length rather quickly, which will likely lead to a good bit of frustration in the latter portions of each, without proper training at least. Only active party members gain experience, which can often lead to lopsided team levels. This is where you may be forced to grind for levels on the rest of the party, which can take quite a long time with 14 total characters to pick from in Final Fantasy Type-0 HD.

While navigating the map or in combat you will have full control of the camera with the right analog stick. Most of the time, you will have little to no issues with the camera itself in the game, but there are times where it can feel way too jerky, especially during intense combat. This makes it much more difficult to keep an eye on enemies, though the useful lock-on tool does help quite a lot.

Square Enix has done a phenomenal job with their recent line or remasters, with another PSP game getting similar treatment in Kingdom Hearts: Birth By Sleep HD late last year. Final Fantasy Type-0 HD is no different, as it got a visual facelift on nearly every aspect to help it fit in with modern consoles. The game doesn’t feature the usual Final Fantasy “wow” moments from a graphical standpoint, but it manages to stay consistently impressive throughout the entire experience, especially in comparison to its PSP counterpart. Similar to Sin City, the game showcases the color red over the otherwise muted color scheme, which really helps to make it stand out from any other game in the long running franchise. 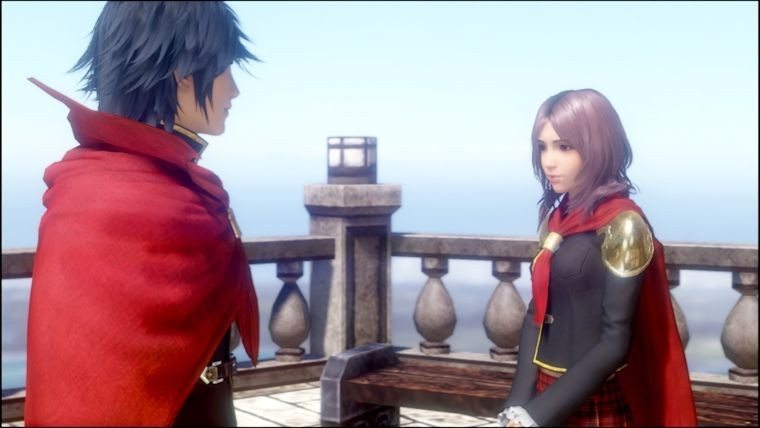 The Final Fantasy franchise has been defined over the years by its gameplay and stories, but there is really nothing more iconic than the music surrounding it. Final Fantasy Type-0 HD continues that trend, with a beautifully orchestrated soundtrack that fits perfectly with the dark and sometimes desolate militaristic setting. The entire soundtrack has been overhauled this time around to take full advantage of the much updated hardware, with a brand new battle theme even added in by composer Takeharu Ishimoto. Sweetening the pot even further is the ability to choose between English or Japanese voice-overs in the game, which is something that is very important to some gamers.

After years of waiting, Final Fantasy Type-0 has finally made its way to the West in grand fashion. Offering gameplay that is rather different for the franchise, the fast paced action manages to cater to not only longtime fans, but also a more widespread Western audience. While it has been massively revamped in both the graphics and audio departments, the game is still held back in other ways due to its portable roots. Regardless, Final Fantasy Type-0 HD is one of the most intriguing and approachable Final Fantasy games in a long time, with action-oriented gameplay and a story full of mystery that is guaranteed to keep players coming back for more.