The latest news in the world of video games at Attack of the Fanboy
December 3rd, 2016 by Dean James 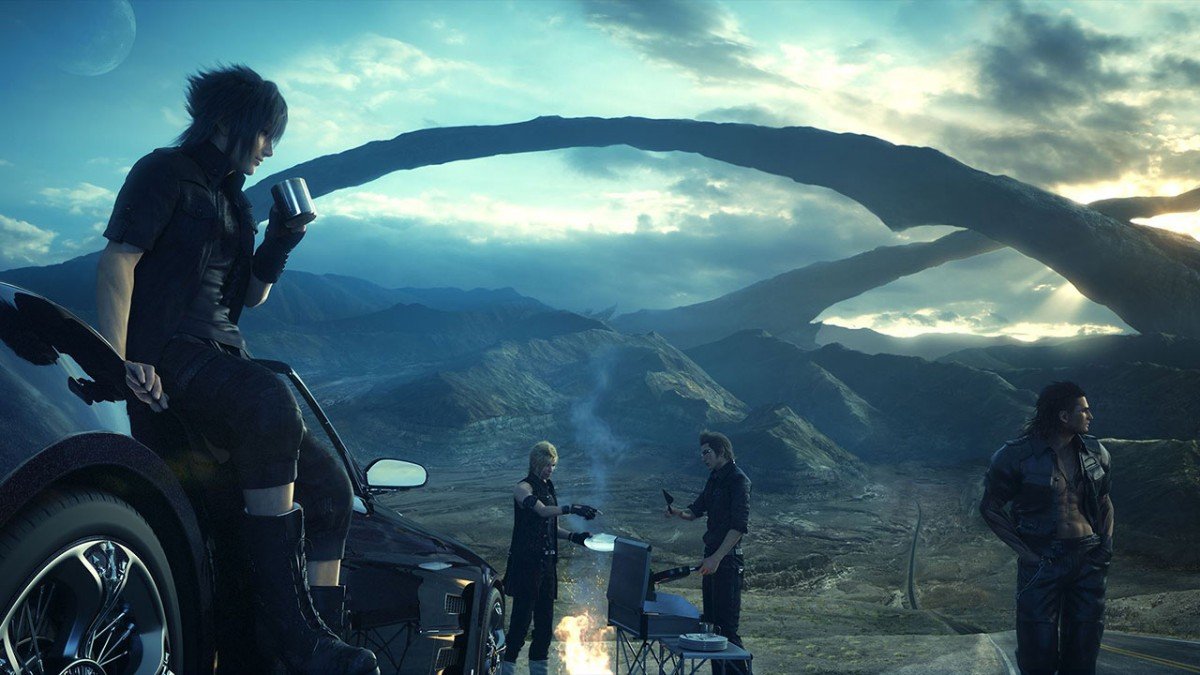 There are some games that seem like they may never come out and Final Fantasy Versus XIII was one of those games. First announced back in 2006, the game stayed in development hell until it was re-revealed back in 2013 as the next mainline Final Fantasy game. Now 10 years later, the more action oriented game is finally here as Final Fantasy XV.

Final Fantasy XV follows the story of Noctis, a prince of the kingdom of Lucis, who is set to be wed to a character named Lunafreya. While on the journey to reunite with Luna, Lucis gets invaded by the Niflheim Empire. In the process, many characters are presumed dead, including Noctis himself, who goes on an adventure with his best friends to rise against the evil empire in this very modern tale.

The group of Noctis, Gladiolus, Prompto, and Ignis are all written incredibly well to where their friendship feels very natural. There is plenty of goofy dialogue between the group, especially from Prompto, but the bond these characters share meshes very well with the overall story arc. This is shown especially during the end of day camping moments where they will often have some great moments around the campfire. 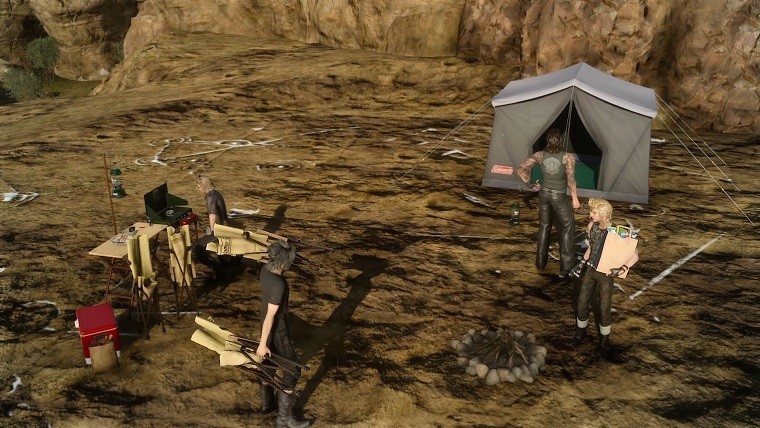 Final Fantasy XV is the kind of game that you should go into with as little story information spoiled beforehand as possible, but there is no question that it is very enjoyable. The more modern and mature set piece definitely brings back memories of entries like Final Fantasy VII and VIII, and like those games, Final Fantasy XV also mixes in its fair share of lighthearted moments as well.  This largely comes via the aforementioned characters, as well as plenty of others like Cindy, granddaughter of series staple Cid.

Taking the complete opposite direction of Final Fantasy XIII, Final Fantasy XV starts off with a very open world and narrative that becomes much more linear as the game goes on. This works to the game’s advantage though, as it allows you to take in the story piece by piece early, but quickly shifting things into high gear by the time you get deeper into the game. There are many games where this would not work quite as well, but it works exceptionally well here.

Throughout the game there are plenty of different locales to visit, which range from larger cities to small middle of nowhere towns. Each of these have the usual shops and rest areas, along with plenty of NPCs that make these areas feel more lively, even though the majority of these cannot be interacted with. Beyond the game’s main story missions, these areas serve as hubs for a variety of different sidequests that you can take on as well. Some of these have you completing a certain task for a character like Cindy, while others are straight up hunting missions that have you going out to slay certain enemies.

With such a giant world found in Final Fantasy, there had to be alternate methods of travel besides running between locations. Fitting in with the theme of brotherhood in the game, the journey is essentially a road trip among buddies and that is why you have a car, known as the Regalia, to drive around and take in the sights of the visually stunning Final Fantasy XV. 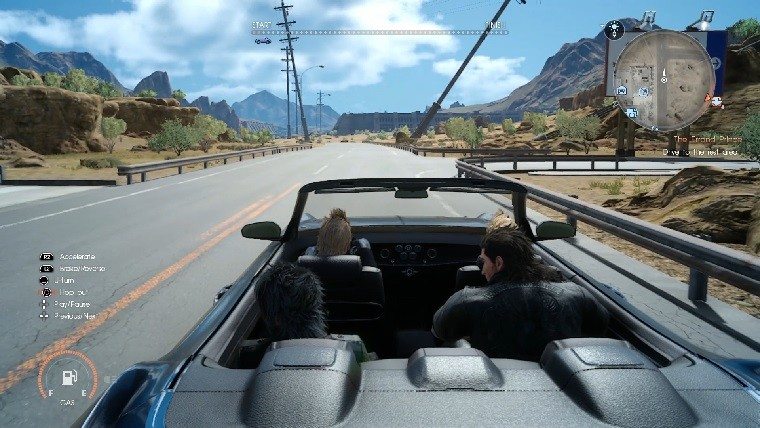 The game features a very realistic take with the vehicle, including you having to keep it fueled. What is quite disappointing though is that you have very limited control over the Regalia, with you essentially only keeping the car moving and choosing to turn onto certain roads if you are using manual mode. It’s not like expansive off-road driving was to be expected, but giving a little more freedom would have been much appreciated. On the other hand, the game does offer auto driving and even fast travel to locations you’ve previously visited for a nominal fee, so you can avoid this if you wish. In addition, you will also unlock the use of Chocobos that you can travel around the map more freely with in classic Final Fantasy fashion.

One of the best features of the Regalia that makes it very worth driving around is the ability to play music. Similar to games like Grand Theft Auto, the Regalia gives you the ability to switch between different radio stations that feature music based on the many games of the Final Fantasy franchise. You start with only a few and have to buy more for very little gil at the various stores you come across, adding in music from games like Final Fantasy IV, Final Fantasy VII, and Final Fantasy VIII. You can even purchase an MP3 Player in the game that lets you play these tracks from anywhere in the game, which is a great addition for long time fans of the series.

Final Fantasy XV also features a dynamic night and day system that tracks 24 hours a day, with the majority of events taking place during the day. Some of the hunter quests are exclusive to nights, but typically you will want to avoid traveling around after dusk. Instead, your best bet is to rest and start anew the following day. This also brings in the game’s food system where you can cook specific meals that will give you a certain boost in battle for a certain period of time. These can also be purchased from restaurants in the game, but it is better served to do it here. Prompto is also taking pictures throughout the game and any he has taken that day can also be saved here and shared through social media, which is a neat little feature.

One of the most important aspects of any Final Fantasy game is its combat system and Final Fantasy XV has shifted dramatically to an action oriented approach that is more akin to Kingdom Hearts than Final Fantasy games of the past, but it manages to fit in near perfectly. The free flowing action feels incredibly fluid as you control Noctis in battle, though the awkward battle camera can often get in the way. Pressing or holding X on Xbox One (Square on PS4) allows you to block and phase through enemy attacks, while pressing or holding B (Circle on PS4) attacks the enemy. Warp strikes also play a crucial role, which allows you to warp through the battlefield through the use of MP, even allowing you to get the high ground on certain enemies as well. 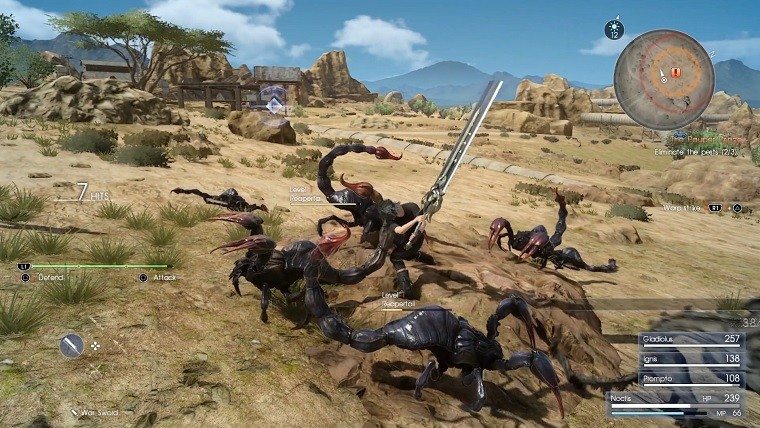 Noctis has control of four different weapons or abilities in battle at any one time, which are mapped to the d-pad in the way you wish. The game starts by having a sword, a greatsword, and a polearm, but you can equip pretty much anything you acquire from a firearm to the very powerful Royal Arms that gradually reduce HP in battle with use.

This is also the way that spells are utilized in Final Fantasy XV, as you can absorb elemental areas to craft your own spells, whether they are basic elemental spells or more advanced through the use of catalysts or larger amounts of that element. These spells are stored in magic flasks that can then be placed in these weapon slots, so you really have a lot of options at your disposal for combat.

While you only have control of Noctis in battle, there are special techniques you can use that cause one of your three teammates to use a special attack that you can then follow up with an attack of your own by pressing the attack button at the right time. These attacks are crucial to use in battle, but they also lead to some technical hiccups pretty often. After activating one of these moves, the movement of the chosen character will often feature slow down and frame rate drops that is not helped with an already questionable battle camera.

As to be expected, completing battles and various quests will reward XP, but also AP, or ability points. These can be spent on the very Final Fantasy X-esque Ascension Grid, which is split into eight different categories. Some of these affect the entire party of characters, while others are specific to one character. Each of the four main characters also have special skills that come into play here, which include Fishing, Survival, Cooking, and Photography for Noctis, Gladiolus, Ignis, and Prompto respectively. 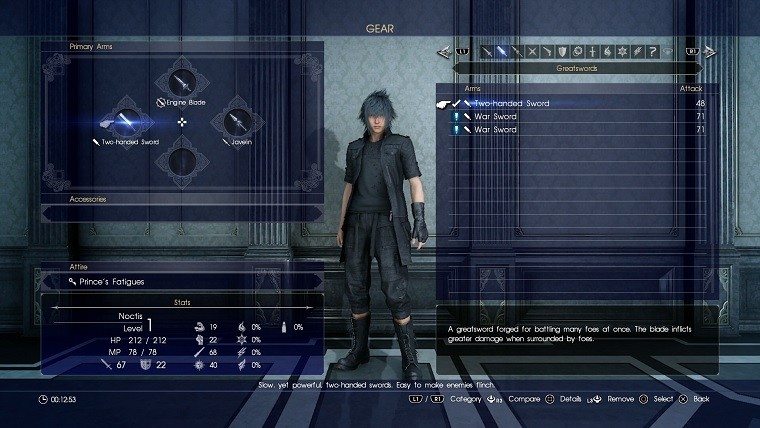 Playing the game on Xbox One, there was one strange bug that kept occurring involving the system’s standby feature. Many times after putting the system in standby and then turning it back on to resume the game, the audio would be completely messed up. It would be very distorted and slowed down, making you have to completely exit out and restart. Thankfully this did not seem to extend further into the game with other audio issues, but it was an annoyance.

Final Fantasy XV had quite a lot to live up to after so many years and the disappointment many had with the last few mainline Final Fantasy games and it certainly does not disappoint. The story is very enjoyable, largely helped by the enjoyable cast of characters that add a lot of heart and charm to the game, and the combat feels innovative and fresh while still maintaining many of the classic elements of the franchise as well. It may have taken a decade to get here, but the journey was worth the wait with the phenomenal Final Fantasy XV.