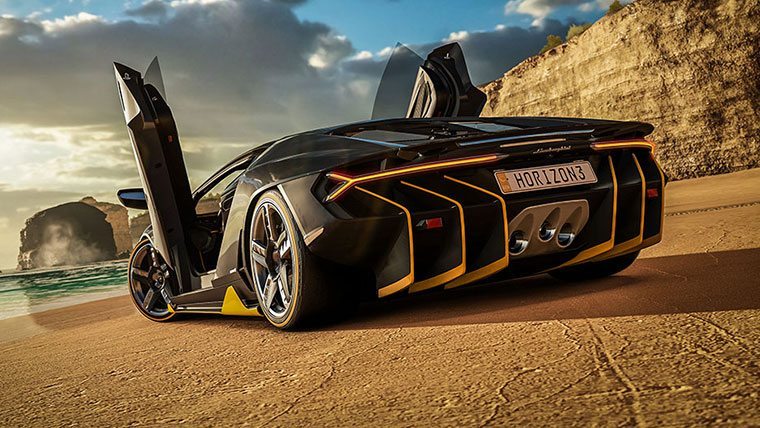 The racing genre has spawned countless franchises over the years, with the Forza brand becoming Microsoft’s go-to option since the original game’s debut in 2005. Originally being just the Motorsport series, Forza Horizon was introduced in 2012 and the two have alternated ever since. The previous game already kicked the series into high gear and now PlayGround Games aims to do it again with Forza Horizon 3.

While the Forza Motorsport games are focused more strictly on racing, the Forza Horizon series injects some story into the mix as you get to drive around open world environments. The past entries had you starting off as a rookie that competes in the Horizon Festival, but Forza Horizon 3 turns that completely on its head by putting you in the role of the Festival Boss from the very start. This story really is far from anything special, but more as a means to get you from one area of the map to another. Players expecting something akin to the more involved story found in a game like The Crew will be disappointed, but what you will find is a much better game overall in most every other area.

Forza Horizon 2 enlisted a little bit more well known voice cast, including Once Upon A Time’s Sean Maguire, but the voice actors featured in Forza Horizon 3 are more enjoyable. Keira is the character you will be interacting with the most, as she serves as your facilitator that helps you with organizing the Horizon Festival that you are now in charge of in the game. One neat little feature is that you can choose from a fairly large list of names for her to call you, with it defaulting to your Xbox Live account holder’s name, so it makes you feel a little more involved. This part can feel a bit robotic at times, due to them throwing it in pretty often into sentences, but it does still fit well into the whole experience. 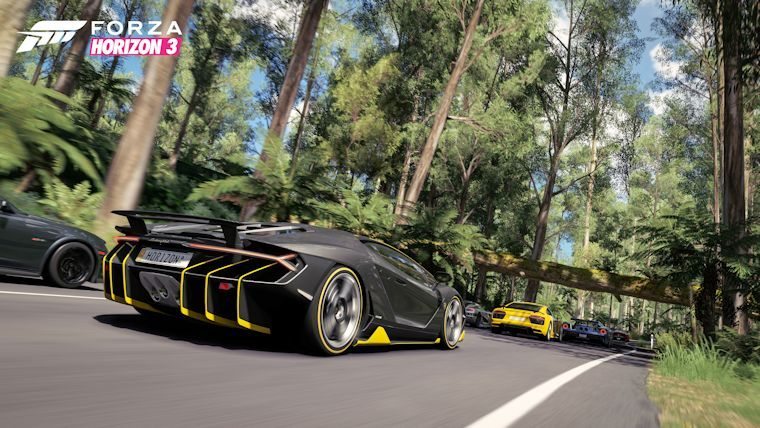 Rather than racing within set tracks, Forza Horizon instead takes the barriers out of the equation and has the races take place throughout an open world environment. The previous two Forza Horizon games have featured Colorado and Europe as locales, with the second game being three times larger than the first. Forza Horizon 3 takes the series to another continent entirely with an Australian setting, which is a very impressive two times larger even than the second game. This massive map is not just made up of the one type of landscape either, as the game boasts six different ecosystems, which range from the Australia outback to rainforests, beaches, and even the seaside city Surfer’s Paradise.

Using a very easy to read map to navigate these areas, Keira will mark locations where you can find new unknown races and what are known as PR stunts, which may be speed traps or other special challenges. While you can technically just drive around aimlessly and sight see, you must select any of the events marked on your map and drive to that destination to move forward, where you will participate in various races, challenges, and more.

This is Forza Horizon 3

The racing itself is going to feel very familiar to anyone that has played any type of Forza game before, which has always seemed to offer a near perfect mix of arcade and simulation racing, making it much more accessible to both casuals and the hardcore gamers.

The driving physics found in Forza Horizon 3 are as good as they’ve ever been in the series, though it can certainly take some time to learn how to utilize them well in the actual races. This is seen between the different types of vehicles you will be driving as well, from cars to even the brand new buggies, with a difference coming from varying weather conditions as well. There is a distinct difference between not only the types of vehicles, but also the terrain on which you are driving on for each variation of vehicle. PlayGround Games has done an exceptional job at distinguishing the sometimes even subtle differences between these, making it truly worth your while to try out the numerous vehicles and upgrades.

The number of vehicles available in Forza Horizon 3 is absolutely huge for a game like this, offering more than 350 to choose from, versus the 200 at the start that its predecessor offered. This actually is a good bit less than that of Forza Motorsport 6, but that is more than acceptable due to the scale of the Horizon series. You will start off with only a few vehicles to choose from, but you will quickly earn in-game credits that can be used to purchase more of them. 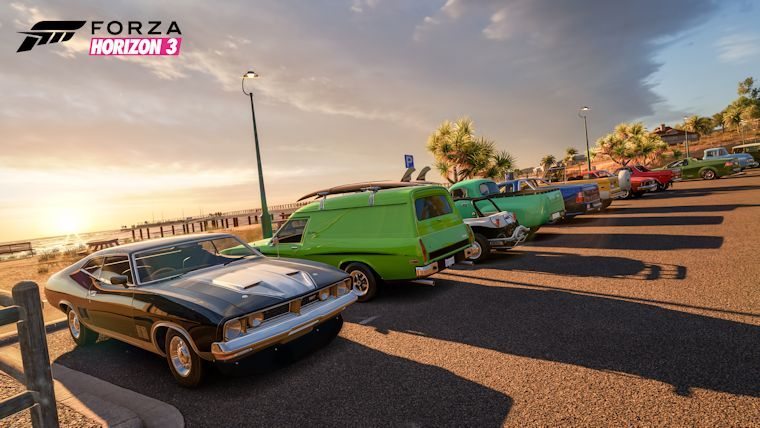 New additions to the lineup include the aforementioned buggies and even Trophy Trucks, the latter of which is a perfect fit for the large offroad sections of the game. The game even has a DLC Trophy Truck that is actually the Warthog from Halo, which can be gotten through a code that has gone out to those that played either Halo game on Xbox One or participates in an upcoming in-game event.

These different vehicles can be customized to your liking, whether it is utilizing a custom paint job that someone uploaded online already or designing your own. As always, you can upgrade the vehicle to make it perform better and therefore up its class. The game even adds the ability to come up with your own vanity plate, which is a nice little addition for a game like this.

Beyond the pre-created races that you’ll find all around the map, you also have the option to create your own events at these locations in what are known as Horizon Blueprints. Fitting in very well with the story that has you in charge of the Horizon Festival as the boss, you can build your own event from the ground up, including the type of race and vehicles allowed. You even have the option to name your event and share it with friends, with you also able to check out their own race as well. 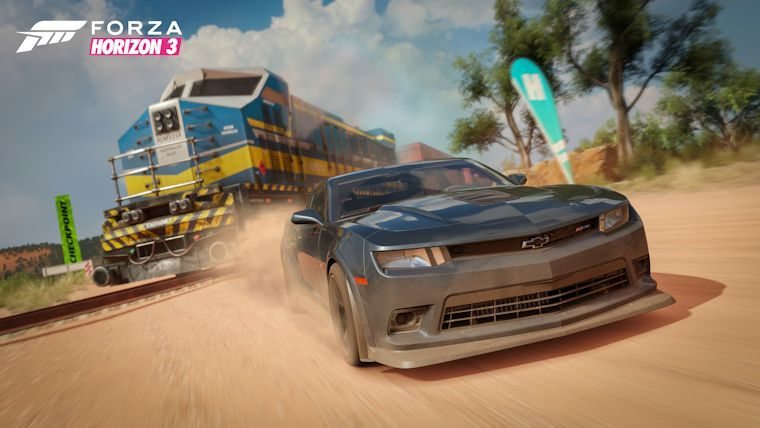 Forza Horizon 3 also introduces up to 4-player online cooperative play for the game’s main campaign. This can be done at anytime in the game, with you able to drop out and enjoy the game in single player at any time as well. While you may not be able to actually go to Australia with your friends, cruising the sandy beaches as you race from one location to the next adds a new dimension to the Forza Horizon series beyond the regular online multiplayer races. What makes this even better is that players on Xbox One and Windows 10 PC can play co-op together thanks to the Xbox Play Anywhere program.

Cruising across Australia is a real joy

Games that have you driving across vast areas absolutely need a well structured soundtrack for you to listen to on the road and Forza Horizon 3 delivers in this department. Early in the game, you will get an opportunity to choose two radio stations to sign to your festival, which will then allow you to listen to them while driving around. As you advance further in the game, you will be able to sign more, with a grand total of eight radio stations, as well as a custom ninth one that you can use to play your own songs through Groove Music. A few of the radio stations are a little too similar in genre, but the diverse array of tracks that you can jam out to while cruising across Australia is a real joy.

One element that has always defined the Forza games are the stunning visuals and Forza Horizon 3 is no different. While nowhere near the drastic improvement between the first two games, Forza Horizon 3 is still one of the best looking games on the Xbox One without question. The level of detail on both the vehicles and environments is stellar, which is complemented well with superb lighting. The new water puddle technology in the game is an exemplary example of this in action, which pairs well with the rain physics. 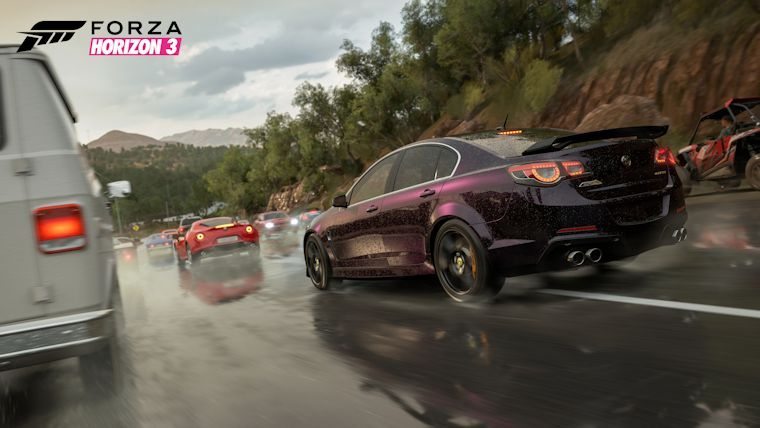 Forza Horizon 3 brings back the ability to take photos throughout the game, but the developer has also introduced what is known as Drone Mode. At any point within the game, you can take to the skies with a drone and fly at realistic speeds around Australia. Zooming around in the game to take footage can be a lot of fun and really helps to capture just how beautiful this game can be.

The still relatively young Forza Horizon series has been consistently great across its first two entries and Forza Horizon 3 continues that impressive trend. Featuring distinctive driving physics that are better than ever and a robust campaign full of different events that takes players across Australia, PlayGround Games has once again delivered another first place finish with Forza Horizon 3.