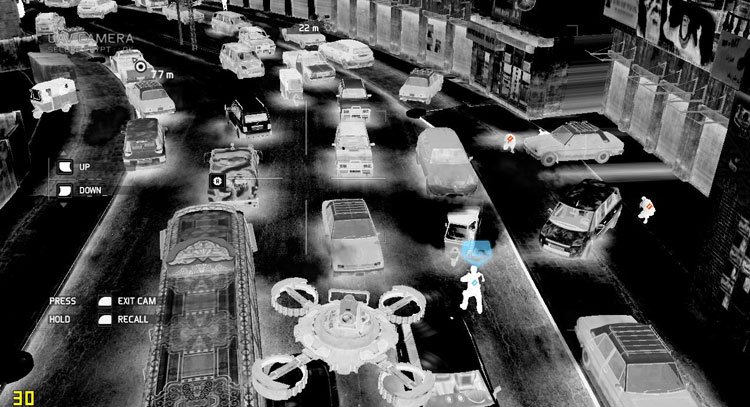 The Tom Clancy Ghost Recon series has spanned over a decade.  In that time, the franchise has gone from a pure first person shooter that relied on team tactics and squad commands in the originals, to a fast paced third person affair in its Advanced Warfighter chapters.  Content to evolve the franchise yet again, Ubisoft has Ghost Recon: Future Solider on deck, and it takes the franchise even deeper into the world of high tech warfare.

Information trumps marksmanship in this recent release.  Taking a different approach from other shooters on the market today, Future soldier asks players to be more tactful on the battlefield by using information gathering tools to swing the tide of a gunfight.  Whether examining it in its campaign, cooperative, or multiplayer modes, the emphasis on high tech gadgetry is more pronounced than ever before.  Motion sensors, cloaking  abilities, reconnaissance drones, and other military technology give Future Soldier a different feel than it competitors like Call of Duty and Battlefield.

Instead of grading you on how fast you can aim down the sights of your weapon, you’ll be judged on the precision of your operation instead.

The game’s campaign has you controlling a team of “Ghosts”, an elite special-ops group that is sent in when the military needs a mission completed with precision.  Arming them with high tech equipment allows for this methodical approach in taking down enemies by always having the inside track on battlefield info.  You’ll be placed in a variety of scenarios that in some cases you’ve seen before in other games,  and in others perhaps not.  Large landscapes leave a lot of discretionary maneuvering where you can mark targets and command your team to take out enemies in tandem.  Galavanting across the globe on numerous high-stakes missions will take you to some beautiful locales that feature tense gunfights.  There’s an emphasis on using your tools correctly, and instead of grading you on how fast you can aim down the sights of your weapon and eliminate you target, you’ll be judged on the precision of your operation instead.  Try to take a less stealthy route, and you’ll find capable enemies that were seemingly just hoping for you to take that approach.

A self proclaimed tactical shooter, Ghost Recon: Future Soldier shows its most promise in its single player offering.  The mode gives the game room to breathe, allowing for all too cool synchoronized take downs, stealthy mission types , and the best the game has to offer from a visual presentation perspective.

The four-player cooperative Guerrilla Mode will be familiar to anyone that has played a horde style game type in recent years.  You’ll infiltrate areas, silently take out your enemies, and then perform different objectives as wave after wave of enemy are unleashed to deter your progression.  Weapons drops in-between waves will allow you to restock your supplies, or outfit an area to help you hold off an attack.  Setting up sensors, claymores, and other items will give you plenty of information on how best to deal with your attackers and progress to the next round.

While other Ghost Recon games have had similar cooperative modes in the past, in its competitive multiplayer is probably where Ghost Recon: Future Soldier takes its most ambitious detour from convention.  Unlike other shooters that require a drip feed of Red Bull in your system to compete, Ghost Recon Future Soldier really does rely on squad based tactics for the best results.  It’s easy to make these claims in pre-launch marketing, but actually pulling it off is exactly what Future Soldier did.  Giving you all of the tools from the single player campaign, Future Soldier asks you to be patient, communicative, and disciplined in the ways that you attack any of the game’s multiplayer offerings.  Revolving around objective style game modes that require players to work as team is asking alot from gamers.  But when it does come together, it’s a refreshing change of pace for the genre that has gravitated towards satisfying the more lone wolf style player.

Fans that have been with the Ghost Recon franchise over the years will notice that some mainstay gamemodes have been eliminated, like standard team deathmatch and the traditional Last Man Standing.  Fortunately, their replacements like Saboteur and Conflict are welcome additions that allow the gameplay to remain in-line with the theme of the game.  An XP system will have you leveling up and unlocking weapons, attachments, character skins, and other customizable features for your avatar that can give you significant benefits on the field of play.  The game’s gunsmith and shooting range feature will allow you to customize and test any weapons which you create, giving you the pitch perfect companion to take with you into a fight.

Alot of these features are fairly standard protocol for most shooters these days, and bring  Ghost Recon: Future Soldier up to speed with the competition.  Though its not really fair to compare the methodical pacing of Ghost Recon with the games that are considered to be in the same genre. Definitely a game that goes outside of the popular conventions that twitch based shooters adhere to, Ghost Recon Future Soldier has alot to offer for gamers who prefer their shooters of the more cerebral nature.