An adventure beyond words. 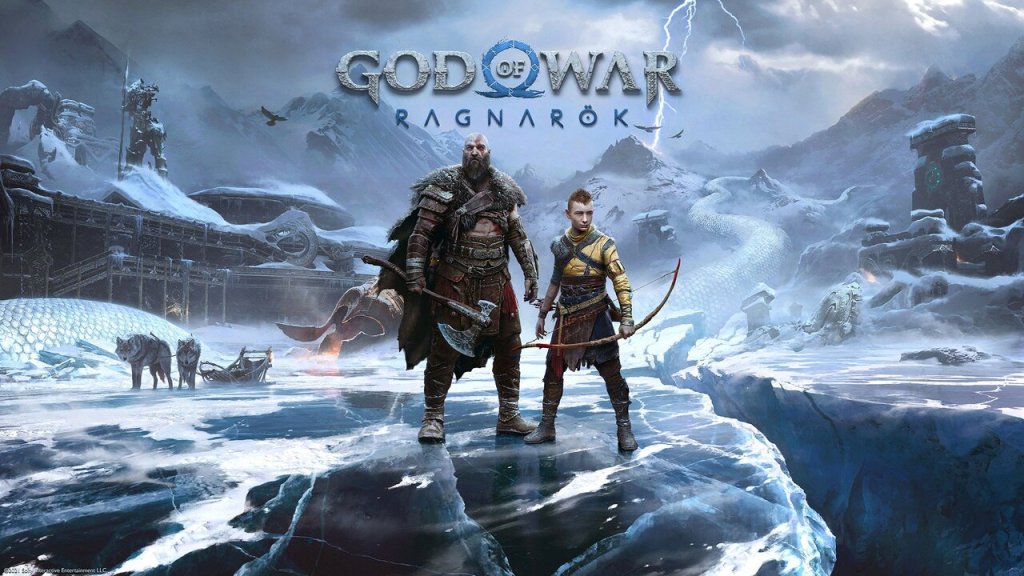 In God of War (2018), Faye’s posthumous wishes were granted. In sending Kratos and Atreus on a quest to spread her ashes from the highest peak in all the nine realms, truths were discovered, bonds were formed, and enemies were made. With the death of a major character in God of War (2018), the stage is set for God of War Ragnarok.

Whether it’s the player-driven combat, detail-heavy realms, or world-class storytelling, God of War Ragnarok shines in almost every light. Know that this review is spoiler-free. Each and every moment in this game is worth experiencing for yourself. To spoil anything would be to dishonor this marvelous adventure.

Mixing The Old With The New – The Combat and The Enemies

With so many weapons of war and attacks at your disposal, the fun is found through player-driven experimentation. Jumping off a ledge to slam your frosted axe into an enemy or grappling across a gap to lunge your flaming blades into your foes is just a few of the new combat possibilities available, but that’s not all. There are also several shield varieties to choose from, all with their own special abilities. Whether you’re a parry pro or need a portable wall to block all incoming attacks, the different shield types feel great and offer unique playstyles.

In God of War Ragnarok, enemy variety isn’t a concern. As if weapon combinations weren’t enough, there are also environmental weapons that add even more choice to how you crush your competition, and the new level of verticality creates fun, diverse mini-arenas. Enemy creatures, soldiers, and undead offer different attacks that are challenging to read and stunning to watch. Even better, Atreus is grown and has a lot more autonomy to attack and kill enemies on his own.

There are dozens of mini-bosses as well that make finding new areas fun and mastering combat a necessity. Don’t worry, you won’t face the same troll mini-boss over and over again.

When it comes to combat, God of War Ragnarok can be boiled down to more God of War (2018). While this is true, and not at all a bad thing, Santa Monica Studio has taken the combat in God of War (2018) and elevated it. Though some may find the combat repetitive, it never feels dull because there are so many ways to approach a battle. The tried-and-refined approach to player choice and encounters all centers on a “whatever feels fun” mentality, and it merits success.

Feel Fimbulwinter – The Performance, The DualSense, and The Accessibility

You can feel the weight of a charged heavy attack as it sinks into the enemy. You can taste the wind as you explore the jungles of Vanaheim. And because of the plethora of accessibility options, you’re allowed to play this game exactly as you want to play it. The level of quality this game hits is top-notch. Everything works together to deliver an unforgettable experience.

On PlayStation 5, God of War Ragnarok can run at 120 FPS with minor frame rate drops. Even when running toward seven different enemies that are all charging forward, you can take comfort in knowing that God of War Ragnarok is capable of handling busy areas with performance that never hinders the experience.

God of War Ragnarok has no egregious bugs to speak of. In a world full of buggy live-service games and half-baked game releases, it is a breath of fresh air knowing that there are almost no bugs in God of War Ragnarok, and if there are any bugs in the game that we missed, they will surely be ironed out by a team dedicated to excellence.

Last but certainly not least, there are pages of accessibility options. All of the buttons can be remapped, individual difficulty options can be adjusted, text can be recolored and resized, multiple audio options are available, and so much more. I loved seeing this degree of extensive, detailed accessibility options as it makes God of War Ragnarok playable for more gamers than ever while pushing the medium one leap forward.

Master Craftsmanship – The Environments and The Details

Speaking of immersion, Santa Monica Studio worked hard to create the most gorgeous nine realms you’ll ever see in a video game. Whether it’s the frozen whisps of Niflheim, the red deserts of Alfheim, or the sweeping vistas of Asgard, God of War Ragnarok’s environments are diverse and genuinely breathtaking. It is a shame that God of War Ragnarok doesn’t have a photo mode in the review copy. I often found myself spending several minutes in between exploring and fighting to just soak in my surroundings. God of War Ragnarok is alive.

What makes the whole world of God of War Ragnarok feel alive is the incredible attention to detail. While the landscapes are colorful, distinguishable, and packed with details, the wildlife steals the show. Otherworldly pixies flutter past your boat; large magical stags run in the clearing beyond; red, green, and blue bugs glow in the dark cave you’re exploring. These explorable stages are filled with activity, beauty, and authenticity.

All nine realms are explorable in this game which means there are several open arenas to get lost in. While experiencing everything God of War Ragnarok offers in its main story, you can take time to investigate one of the many surprisingly large open areas that contain meaningful collectibles and incredible side quests. It is easy to lose track of time traversing and discovering every little detail in God of War Ragnarok.

Father and Son and Friends – The Characters and The Themes

Storytelling is the heart and soul of God of War Ragnarok. Whether micro or macro, God of War Ragnarok uses its colorful cast of characters to deliver well-executed, smart themes that will linger in your mind hours after you put it down. While the core of this game is still centered on a father and his son, the characters surrounding them are independent vehicles that explore other avenues of narrative in ways that no other game has successfully accomplished.

What makes God of War Ragnarok a masterpiece is the characters, the themes, and the storytelling. In God of War (2018), the main characters focus on Kratos and Atreus and one of the main themes is becoming more than your mistakes. And in God of War Ragnarok, the story picks up right where it left off. The main theme is explored much further as many more are introduced, and the introduction of additional characters delivers powerful, thought-provoking dialogue that widens the scope and creates space for countless story-focused vignettes.

While still part of the larger narrative, each character — Kratos, Atreus, Freya, Sindri, Brok, Odin, Thor, and many more — has their own motivations, their own past, and their own goals. The abundance of well-developed characters makes the stories told in God of War Ragnarok feel like less linear conclusions in favor of more discussions observed through multiple lenses.

God of War Ragnarok is a game that asks giant questions. Does the past define who we are now? Are we free to choose our own destiny? Is violence ever justified? Themes of prophecy and choices, actions and consequences, war and peace, resentment and forgiveness, closing and opening, trust, love, family, grief, and responsibility, are topics that God of War Ragnarok — an action game that has transcended its mythological beat ’em up roots — successfully deliberates.

A Tale You’ll Never Forget – The Path and The Favors

God of War Ragnarok uses its characters to tell stories in two main ways: the Path (the main quest), and the Favors (the side quests). In short, you don’t need to worry about the Path’s quality. The Path is an absolutely phenomenal thrill-ride adventure that closes the God of War Norse saga out nicely. But honestly, we never needed to worry about whether or not the main story was going to be good or not. The Path deserves five stars, but the Favors are a new gold standard for video game side quests.

Most of the Favors in God of War Ragnarok are the best side quests I’ve ever played. Without spoiling anything, the quality of the Favors can look like Kratos helping Mimir through his past mistakes and together, feeling the weight of resolution, or a growing, mindful Atreus who now contemplates the consequences of helping those who can’t help themselves while Kratos enjoys the fleeting moments with his son that only a father knows. The Favors are bite-sized stories that are all about quality over quantity.

Filled with micro-narratives revolving around the themes discussed earlier, the Favors feel like necessary pieces of story since the world of God of War Ragnarok is so intertwined and obsessed with character-first storytelling. While you are playing as a god, the humanity of these multi-dimensional characters is on full display during Favors. And the way they are handled is also excellent. Favors are introduced gradually, which allows players controlled freedom instead of the decision paralysis that multiple side quests given all at once often result in.

Santa Monica Studio is so confident in its Favors that major story beats are contained in them. If you want to discover the full story of God of War Ragnarok, play through all of the Favors.

God of War Ragnarok invites you into a world of wonder, conflict, and conclusions. With an improved combat system, impressive new enemies, immersive environments, and unparalleled storytelling, God of War Ragnarok delivers one of the deepest, richest gaming experiences to date.

Though the perfect game doesn’t exist, God of War Ragnarok’s ability to lead a player-driven, multi-layered story is worth celebrating. For people who love resonant video games that challenge the gamer both mechanically and narratively, God of War Ragnarok is an outstanding game that will stand as a beacon for what storytelling greatness should be.

God of War Ragnarok is available on November 9, 2022, on PlayStation 5 and PlayStation 4.