Guacamelee Super Turbo Championship Edition is an updated, and new-gen version of last year’s excellent Metroidvania title Guacamelee. The Super Turbo Championship Edition adds in the previous DLC, along with a few new areas, enemies, and costumes. The base game remains the same great action platforming that we all enjoyed in April 2013, so do these additions add enough value for new players and old?

Metroidvania is a tried and true method of game design, and Guacamelee is a great representation of the genre

In case you didn’t play the original game, Guacamelee is what is referred to as a Metroidvania, meaning it combines elements of the Metroid and Castlevania series of platformers. Metroidvania titles drop you into a 2D open-world that you must explore to unlock various secrets. These secrets will usually be powers that enable you to then explore more of the map. For example, as you explore the world of Guacamelee you will come across large colored blocks that stand in your way. Once you gain a new power you are able to destroy those blocks, such as the upper-cut ability destroying red ones, which unlocks a new path for you to take.

It is a tried and true method of game design, and Guacamelee is a great representation of the genre. The overworld is large and fun to explore. Gaining new abilities happens fast, and will usually yield enough goodies and extra areas to make you feel like you are progressing quickly. This classic game design is boosted significantly by the great world and characters of Guacamelee. The art style in the game is superb, utilizing its Mexican roots for great effect, and every character comes to life with tons of color and superb animation. 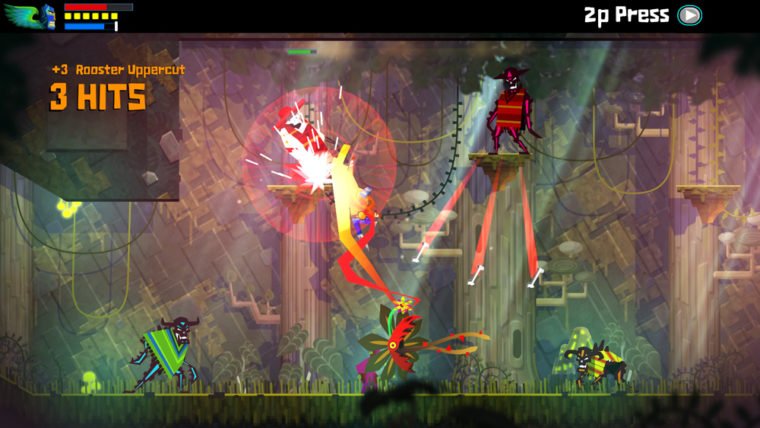 That animation plays out in glorious detail during Guacamelee’s many combat moments. Fighting in Guacamelee is smooth and fun, allowing the player to pull together their multiple powers to form long and complex combos against tons of enemies. Punching a skeleton, grabbing him, throwing him in the air, slamming him down with a belly flop, then suplexing him into the ground to finish him off never really gets old.

Guacamelee can be brutal at times, forcing you to repeat sections over and over

The writing and story of Guacamelee are both excellent as well. Drawing from traditional Mexican folklore, Guacamelee features evil charros, valiant luchadors, and the world of the dead. Countering this, the game adds in touches of humor that give levity to the experience. References, both to gaming and pop culture at large, bring the world to life and give the player reason to continue on, even when the high difficulty level slows them down. Guacamelee can be brutal at times, forcing you to repeat sections over and over, but while it can frustrate, it can also delight with all of the other elements in the game.

So, Guacamelee the original is great, but what has been added for Guacamelee Super Turbo Championship Edition? First up is the Diablo’s Domain DLC, which adds in a new area called El Infierno. This is an even more punishing set of platforming and combat challenges that reward the player with new costumes. These, like the other costumes in the game, aren’t just cosmetic though. They actually change up the game by giving you different stats and abilities. 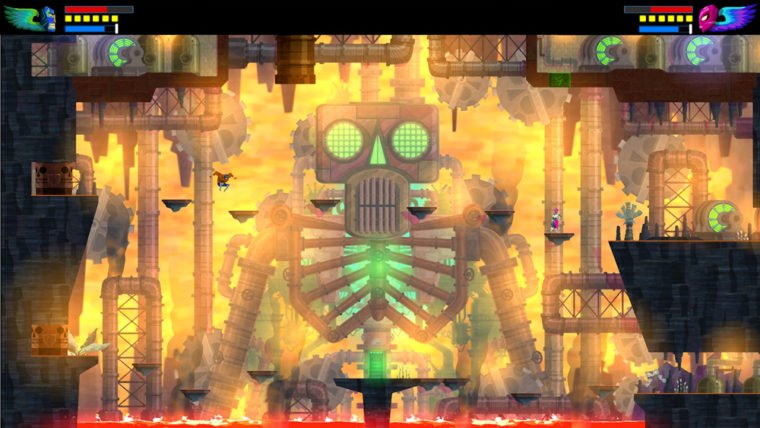 Along with the DLC comes a new area of the main story, and a new boss to fight. Without spoiling too much, the new area and boss are enjoyable and add a bit of length to Guacamelee’s too-short campaign. The fight itself took me a few tries to nail down, so I would say it was challenging enough to fit in with the rest of the game.

The other major addition in Guacamelee Super Turbo Championship Edition is Intenso. This acts as a sort of “oh crap” button, powering up your character whenever you need it. A meter sits at the top of the screen, which fills up as you destroy enemies. Once it is ready you can activate Intenso whenever you want, but it should be reserved for the more difficult areas of the game. Increasing your speed and the damage that you deal out will greatly help in Guacamelee’s tougher spots. Extra powers can be bought, such as health regeneration, which activate alongside Intenso, just in case you need that extra boost.

All-in-all these are nice additions to a great game. However, I don’t feel like enough has been added here to warrant a double purchase if you already own the original Guacamelee. Unless you want the game on a new-gen console, which would be understandable since the art style sings in 1080p, it might be best to just grab the DLC and keep your old version. If, however, you never played the original then Guacamelee Super Turbo Championship Edition is worth checking out, and is the definitive version of an enjoyable game.