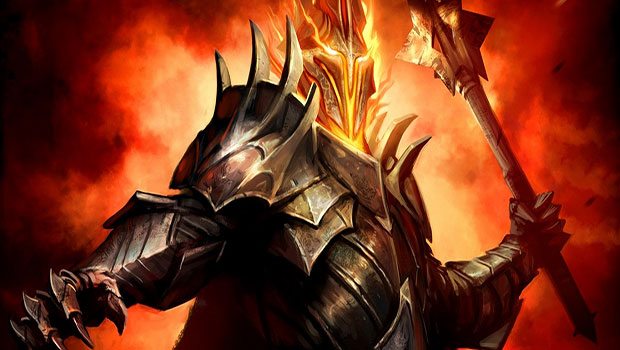 Battle Arena games have traditionally steered clear of consoles largely because of the constraints posed by a controller.   The genre has exploded in popularity in recent years, just look at games like League of Legends and Valve’s DOTA  for examples of the wild success it has had on the PC.  Monolith’s Guardians of Middle Earth stands shoulder to shoulder with the best in the genre, while condensing the commands and features found in MOBA titles on the  PC.  Rooted in the lore of Lord of the Rings, Guardians of Middle Earth brings an all-star cast of characters to do battle with, in this first attempt at bringing a PC style game to consoles.

Guardians of Middle Earth is every bit as entertaining as other Battle Arena games, and at times, the simplied control scheme and streamlined leveling system are preferable to the more complex systems found on PC.  With everything you need being just thumbs length away, Guardians is definitely more friendly to beginners, with enough meat to dig into for veterans as well.  Being a MOBA, Guardians of Middle Earth is an online only experience, where players team up with four other players for five on five gameplay.   These five on five matches can be either of the single or three path variety, with the objective being to traverse to the other side of the map and wipe out the opposing team’s base. 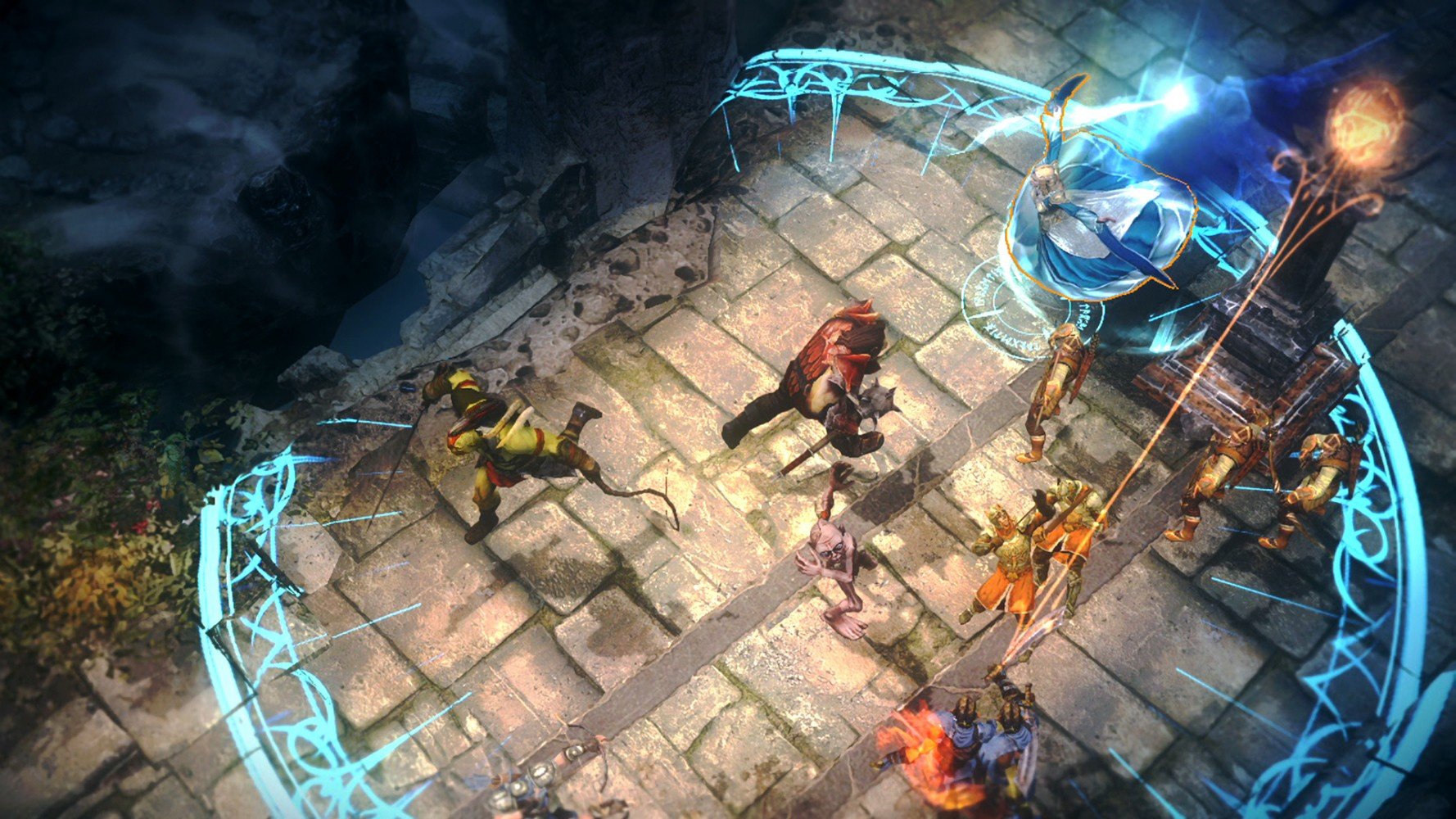 Your Guardian will be selected from a lengthy list of characters from the popular Lord of the Rings franchise.  There are good Guardians and bad Guardians, which include the likes of Gandalf, Sauron, Golem, Aragorn and quite a few others.   It might be the first time you get to see Aragorn and Sauron fighting side by side for a common goal, but teams can be mixed and matched at the discretion of the players.  These Guardian characters each have a very specific skill set with an overall theme applied to them.  Some are good at defending towers, others are good at slashing through enemy forces, some are ranged attackers, magicians, or melee specialists.

The gameplay is very similar to other games of this type.  Soldiers intermittently pour out of your base down the paths of the battlefield while being controlled by the computer.  On these paths there are towers which impede their progress.  The goal is to conquer paths and knock out enemy towers until you get to their main base, where you will ultimately knock the opposing team out of the game.   However, the opposition also has soldiers streaming out of their base, so the difference makers are you, the Guardians, and how you and your team use your abilities.  As towers are knocked out, soldiers are killed in battle, and opposing Guardians killed, you’ll earn points that go towards leveling your character.  This leveling system is only for a single match.  There is a cap on how powerful your character can get, and the trick is to try and get there before the opposing team, while trying to not die, which helps them level their characters.  Guardians of Middle Earth doesn’t reinvent the wheel in this genre, its a tried and true formula that offers some pretty intense tug-of-war style battles, especially when you get a full five on five game with live players online.

In match, this leveling and gameplay is all very intuitive.  You’ll be guided towards leveling your character at the appropriate times, with your abilities clearly labeled and easy to learn.  Objects like barracks and towers can be upgraded, and you’ll be prompted to do so when you pass one.   This type of streamlining and explanation are all very helpful for new players learning the ropes of this type of game.  A clear mini-map will allow you to monitor all of the action in the field of play which includes ally locations, enemy locations, and streams of soldiers funneling in from both sides.  There are also buffs and health plants revealed throughout the map as a match progresses.  Monitoring your control of key areas of the map is just as important in Guardians of Middle Earth as controlling your Guardian in any single battle.  It’s an addicting breed of gameplay that has all the same hooks as other MOBA titles.   Unfortunately, this addiction will also come with a bit of pain.  Actually getting into games in Guardians of Middle Earth can be a painstakingly long process.   We’ve found matchmaking queues that have lasted as long as five minutes, with the bare minimum being around a minute and a half.  Getting into a game isn’t the only problem.  Once in, there’s also a chance that you’ll experience poor network performance, that really hampers what should be an otherwise fun time.  These problems can crop up at a moments notice, and you’ll be booted from the game as a result, with all progress and XP that you’ve earned, lost. 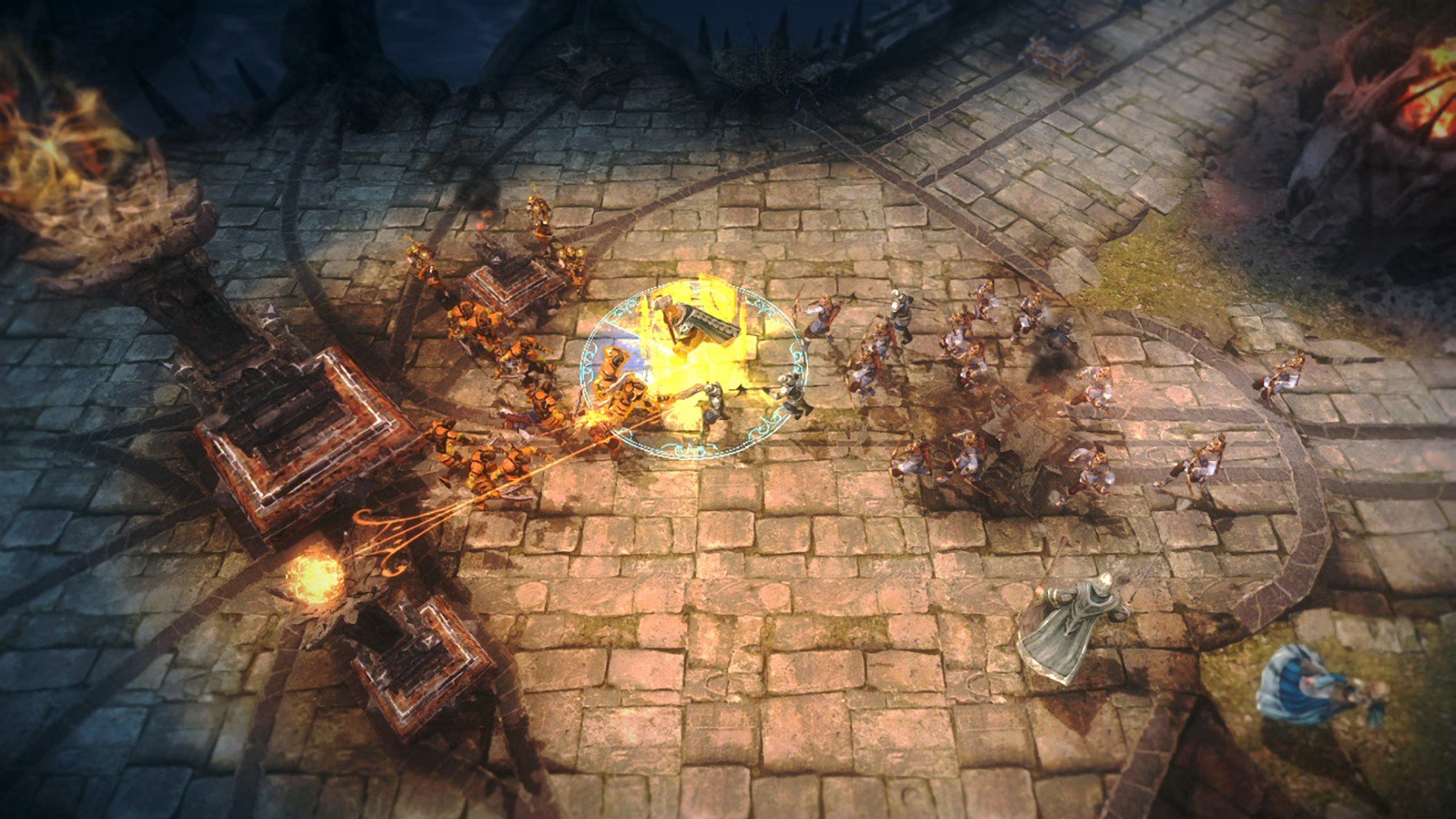 For as simple and as streamlined as the core gameplay is, Guardians of Middle Earth is rather deep and confusing when you dig into the customization options that are available.  You can create multiple loadouts for your Guardian, which consist of a belt filled with Gems, Relics, Potions, Commands and other quick use items.  There is a wide selection of things to choose from, each costing you in-game cash.  With no clear detail of how these purchases will affect your character, customization tweaks can be a costly game of trial and error.  Being that this is an online only game, you’ll need to head onto the battlefield to try out your new stash of supplies, which is a time consuming affair when you add in the connection issues that frequently arise.   Though Lord of the Rings fans should be pleased with Guardians of Middle Earth.  The entire game is clearly drenched in fan-service for the popular franchise, and it’s hard to contemplate a property that is better suited for this genre.  The sights and sounds in battle, the menus, music, and intricacies of the game all have that distinct Lord of the Rings feel.  Though with only one map to play on for each game type, it’s hard not to see some missed opportunity, considering the wealth of iconic arenas that could have been drawn from the books and movies.

Guardians of Middle Earth is a surprisingly good MOBA on consoles,  suited well for veterans and newcomers to the genre alike.  The Lord of the Rings franchise is a match made in heaven for online battle arena games, and fans will get their fill of iconic characters to choose from.  While the game does have its shortcomings, it’ll keep you coming back for more with its deep progression system and balanced gameplay.  If other developers are planning on bringing other MOBA titles to consoles, Guardians of Middle Earth has set a high bar.