Guardians of the Galaxy: The Telltale Series – Episode 1 Review 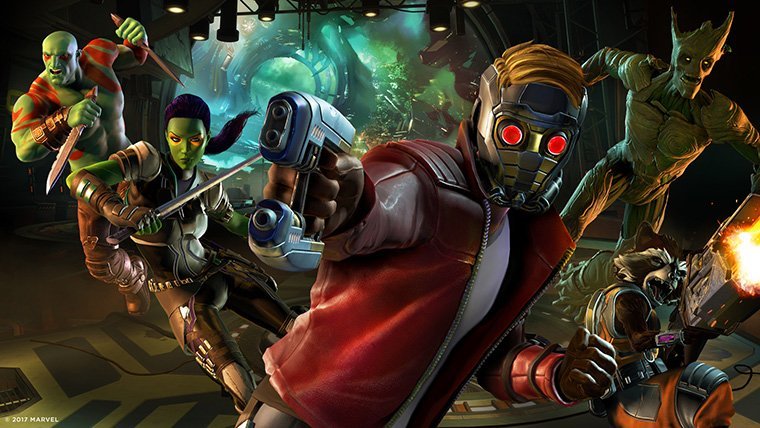 When Telltale first announced a partnership with Marvel, fans began frantically speculating about what property they’d be taking on. Spider-Man, X-Men, Iron Man, the options were endless. When it was finally revealed to be Guardians of the Galaxy it surprised people, but still made a whole lot of sense. The developer had already shown how well they could handle action comedy, especially with an ensemble cast. Now we have Guardians of the Galaxy: The Telltale Series – Episode 1  “Tangled Up in Blue”, which shows that this marriage with Marvel really was a perfect fit, though this particular episode doesn’t hit it out of the park just yet.

Existing in its own universe, not shackled to either the movie or comic universes of Marvel’s ever sprawling franchise, Guardians of the Galaxy sets itself up quickly and effectively. Starting out with a mad rush against longtime Marvel foe Thanos, the Guardians are already a well established team here. This helps avoid the origin story fatigue that is definitely settling in across the comic adaptation space. 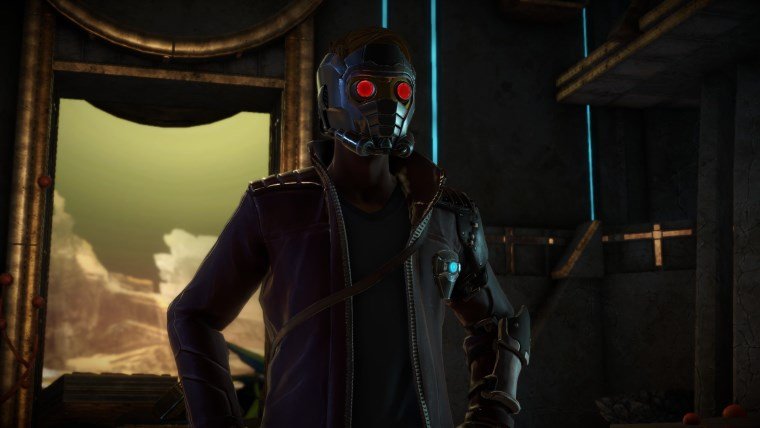 Surprisingly, the series handles this opening rather quickly, and the story takes some very unexpected turns throughout the hour and a half that Episode 1 will take you to complete. I won’t get into the exact storyline to avoid spoilers, but expect some twists and turns along the way. So the story is decent, even with this just being the opening, but the real focus here is on the characters, with the Guardians themselves taking the spotlight.

Dialogue is lighthearted and fun, with some genuine laugh out loud moments sprinkled throughout

Telltale has pointed out that there are five members of the team and five episodes in this new Guardians of the Galaxy series. With this, players might expect the focus to shift a bit, possibly even altering playable characters. For this episode, at least, Star-Lord takes the major focus, and will likely remain that way throughout given some of the story beats. What was surprising though was that during some action scenes it seems that you’ll switch between team members on the fly, controlling them for an action or two as they fight some galactic sized foe.

This is an interesting mechanic for Telltale, taking a whack at the delicate fourth wall that they build between the player and the game. It works though, and it helps the team feel more like a cohesive unit. As Star-Lord is knocked away or incapacitated players will shift to Drax to take a shot, then Groot will fly in, or Rocket will fire off some crazy weapon. This wasn’t common, but the time spent in this particular action scene was fun and promised good things going forward.

The gameplay in general delivers on this promise as well, with more action than we’ve seen from Telltale in some time. Quick time events may be getting old for some, but if you even have a passing interest in them, Guardians of the Galaxy offers up some of the best in its short runtime. Telltale is obviously branching out more as well with new stuff like being able to call your allies in other locations, and using Star-Lord’s jet boots to move up and down in the environment. These aren’t utilized a ton here, but they’re hints of what is coming in future episodes. 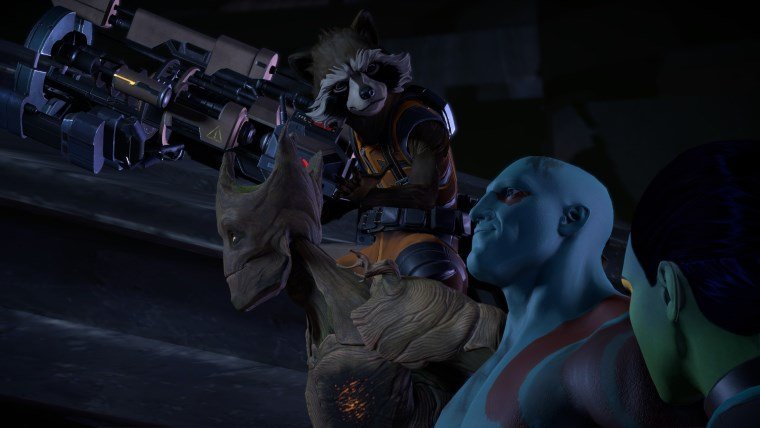 The real question on everyone’s mind though is, how is the writing. Tales from the Borderlands was on everyone’s mind looking at this game under development, and that game had some of the best writing ever put into the medium. Guardians of the Galaxy hasn’t hit that high watermark just yet, but to be fair, nether did the first episode of Tales. Episode 1 plays things a bit safe, which works as an introduction, but could be a problem if it continues.

Dialogue is lighthearted and fun, with some genuine laugh out loud moments sprinkled throughout. Still, in general Guardians of the Galaxy Episode 1 introduces us to the characters, the universe, and the story, but does little to exceed those expectations. A few more genuinely funny scenes, or another creative action set piece would have really pushed it over the top. But as it stands, this is a good intro and promises even better things going forward, but if you play it by itself you won’t feel completely satisfied just yet.

However, there is another area where Tales succeeded that Guardians matches, and could even exceed. The music here is phenomenal, matching what we’ve seen with Tales and the Guardians film. There’s not a ton of tracks, as this is just a single episode, but the few songs that did chime in were really great. Players should expect to hunt down this soundtrack once this series wraps itself up after Episode 5. 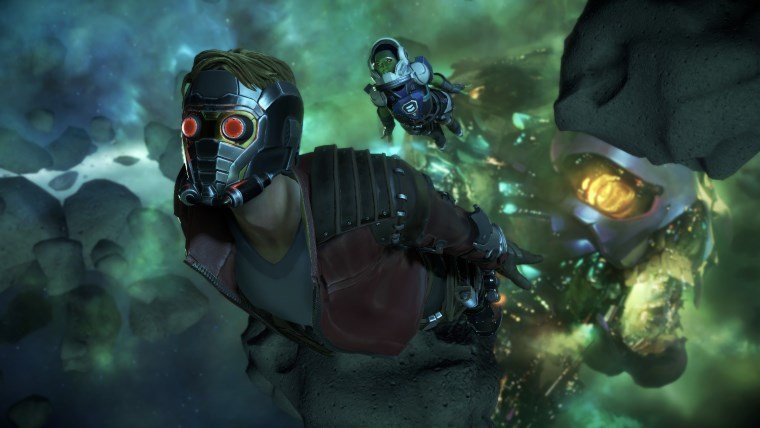 Other areas are about as players should expect from a Telltale game. Guardians is running on the new, updated engine, and it’s running much smoother than Batman did. Playing on PC I ran at a solid and steady framerate from start to finish, with dips only happening in scene transitions where it was unobtrusive. Animation is still fairly robotic, but at this point that’s to be expected, and it was at least not glitchy in any major way. Overall I love the art style. Despite its low fidelity and platic-y sheen, it just has a distinct and quality look to it that felt natural for the property.

The voice actors also do a good job all around, though it is jarring to hear different voices for some of these characters. It’s not like the Guardians of the Galaxy film has been around so long that changing things up is verboten, but the voices from the movie are so engaging that the small changes here are quite noticeable. I was getting used to them even halfway through Episode 1 though, so while they’re an immediate shock, it is one that can be overcome with time. Once you do get over it, the voice actors show themselves to be quite talented and suited for their characters.

Guardians of the Galaxy: The Telltale Series – Episode 1 “Tangled Up in Blue” is a great introduction to this vast universe. It doesn’t excel quite as much as Telltale’s best, but it serves its purpose exceptionally well. Introducing us to the characters, the story, and delivering some laughs, it looks like we’re in for another wonderful ride with Telltale.

Guardians of the Galaxy Tales from the Borderlands Telltale The Walking Dead: A New Frontier
"liked"

Guardians of the Galaxy - Episode 1