The latest news in the world of video games at Attack of the Fanboy
September 24th, 2010 by Bill Hess 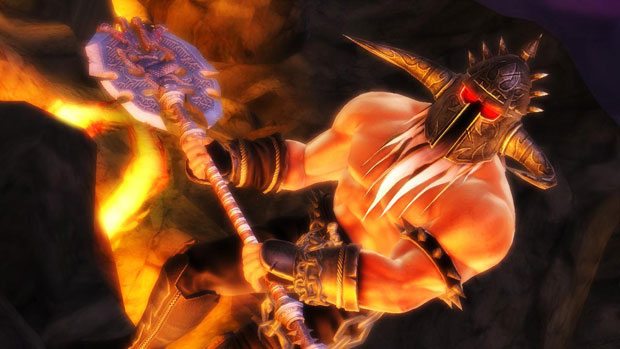 In Guitar Hero: Warriors of Rock, join with friends on an epic rock journey to save rock n’ roll. Featuring an impressive 90+ track set list, a totally redesigned rock-inspired guitar controller and a host of all-new gameplay features, living room legends and their friends can strum, drum and wail in the most immersive music videogame experience to date. Delivering the quintessential rock music collection that focuses on guitar shredding hits from bands such as Black Sabbath, Slipknot and Megadeth and larger-than-life band anthems from Queen, Muse and KISS, players can unleash more rewards and unlockable content than ever before in Guitar Hero: Warriors of Rock’s Quest Mode, the franchise’s first ever story-based mode, and Quickplay+, which invites challenge-starved fanatics to test their rock skills. Running on the powerful Guitar Hero engine that has been expanded and refined and with encores from the addictive, award-winning gameplay features that made Guitar Hero one of the most popular franchises of all-time – such as Party Play, Competitive modes and any combination of up to four instruments –the game offers a complete interactive and connected experience bringing friends and foes to the stage in the ultimate rock music experience. [Activision]

As much as it is easy to write off Guitar Hero Warriors of Rock as another carbon copy of previous iterations, Neversoft put their best foot forward in giving the game a brand new feel in the single player component.  Laid out in the form of a quest to “save rock and roll’ you will play though setlists and earn stars with various characters from previous Guitar Hero games.  The stars work as a leveling system where you earn enough stars to unlock the Rock Warrior which is essentially the encore song that those that are familiar with the old games are accustomed to.  While on your quest you will have to remove some treasureiffic guitar from a stone by completing RUSH’s 2112.  As usual as you progress down the path songs get progressively more difficult. The same formula is basically intact with a fresh coat of paint to liven it up a little bit.

You would think that after the number of Guitar Hero titles that have been released the music catalogue would begin to get a little stale, and you would be correct.  While there a quite a few gems peppered into the mix of Guitar Hero Warriors of Rock, the approximated a 70/30 ratio of songs that I had never heard of to songs that I considered either worthwhile or fun to play.  While last years Guitar Hero 5 showed signs of a weakening playlist it is even more noticeable this year.

For a genre that turned gaming on it’s head a few years back there truly has been a lack of innovation in each iteration of the Guitar Hero franchise.  In what now seems like a yearly money grab by Activision, small changes and tweaks to the core gameplay mechanic have become common place.  The only thing that this franchise has me guessing now, is how long before people long grow tired of the same rehashed gameplay and tiny changes to the core of the game.

For the time I wasted in playing through the mediocre “campaign” I would like my time back.  As a long time fan of the series, I hate the fact that I now hate Guitar Hero games.  Nothing has changed, the series has gotten progressively better with this probably being the best of bunch.  The fret boards and rhythm of the game are spot on and Neversoft truly has found it’s groove in churning out Guitar Hero titles.  However, the lack of innovation and the simple fact I have played this game before with a better soundtrack and arguably better story line leaves me to wonder if I could ever rekindle my love for the series.  In a series that probably should have called it quits with Guitar Hero 3 ( my personal favorite), it’s just sad that this series will now bleed out from here on.

The few new features gave me nothing to love about the newest Guitar Hero game.  The little things that I did like were, all things considered, a futile effort by Neversoft.  It’s understandably hard to change a formula that has sold so many copies and continues to do so year over year.  But, for fans of the series and genre in general, you learn to expect bigger and better things in turn for your commitment to playing/buying a game every time a new one comes out.   But in the words of the great 80’s band Great White..Once Bitten Twice Shy, well make that Bitten Four Times now I’m effing done with it.