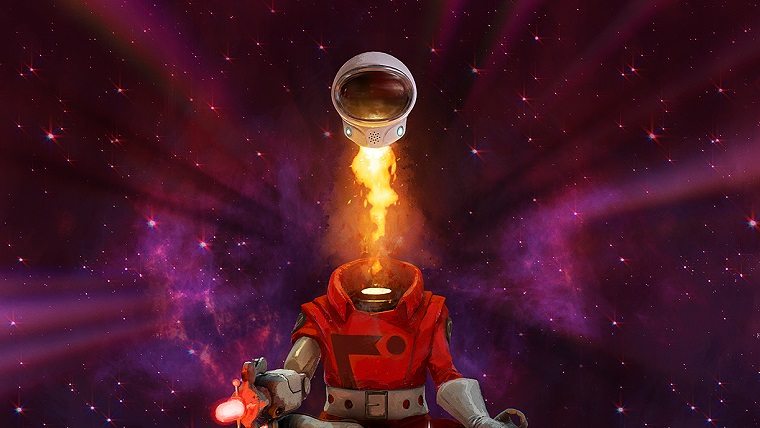 While most metroidvanias offer a more arcade-like experience, the stories and the accompanying characters usually take themselves pretty seriously. Most recently we’ve gotten great games like Axiom Verge and Ori and the Blind Forest, which both backdrop their classic mechanics with some emotional/psychological narratives. However, Double Fine’s new foray into the classic genre takes things in a decidedly different direction, and it’s one that definitely paid off.

Headlander is a classic metroidvania from a mechanical standpoint, but it could not be any further from its contemporaries in its premise. You control the disembodied head of the last known human in the universe, with all of humanity now living in “perfect” robot bodies in a futuristic utopia of sorts. Life is “groovy” and everyone is happy in their 60’s-style living situation, but they are all really enslaved by an advanced AI called Methuselah. While Methuselah’s reasoning for enslaving everyone remains a mystery at first, as you attempt to figure out your own past you will also slowly discover what the evil AI has done.

While the plot could be seen as creepy depending on how you look at it, Double Fine in no way, shape or form goes for a serious tone. As your head floats through the game’s ever-evolving labyrinth you will interact with characters and witness situations that are pure hilarity. All of the robots act bizarrely as they comment on their surroundings and those they are with, and even the talking doorways will make bad puns regarding what you need in order to get through. It’s important to note, however, that the humor never feels forced or overloaded, as the game also offers plenty of the quiet and isolated exploration true to the genre. 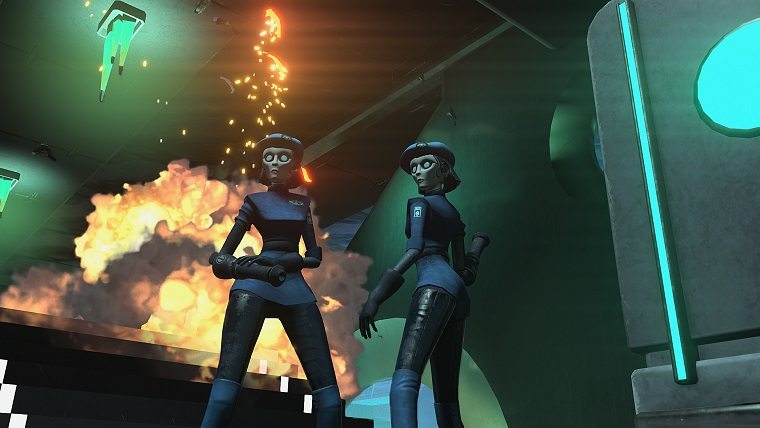 The humor is also delivered mechanically due to the fact that you’re nothing more than a floating head that needs to attach to robot bodies in order to get by. Some robot bodies will allow you to pop their heads right off so you can control them to get through doors and obstacles, though others will require you to pop their heads off in combat. Enemies typically have a color security clearance that are based on several different colors, which requires you to take off their heads and attach to their bodies to get through the matching-colored doors. This is a common gameplay element throughout the game, and requires a little puzzle solving even during standard navigation.

Humor is the bread and butter of Headlander, as it’s prevalent in both the narrative and gameplay

Combat in the game is done mostly through laser fights, though this game handles it more like a puzzle than it does all-out action. Enemy attacks deal heavy damage and can turn you into dust quickly, requiring you to plan out your moves carefully. Your lasers bounce off objects and you can view their trajectories, meaning that you’ll often be trying to bounce your lasers off of several different objects so you can eventually nail a headshot on the other side of the room. It works really well and the way it forces you to progress through enemy-littered rooms gives the game an Oddworld vibe that is always welcomed.

The game definitely puts up a challenge thanks to its higher emphasis on puzzle-like gameplay, though it can go a little too far at points. The biggest example of this is in the game’s auto-save feature, which doesn’t trigger enough during the more intense segments of the game. There are several instances where you need to work your way around a room and interact with machines in order to complete a puzzle, which takes a lot of patience as you can die easily due to enemy fire or from obstacles like lasers or crushing machinery. However, the game will not auto-save upon you completing your objective, but after you’ve left the room. This wouldn’t be a huge deal if it weren’t for the hoards of enemies that typically follow, which results in a lot of deaths and a lot of having to re-complete entire rooms over and over. 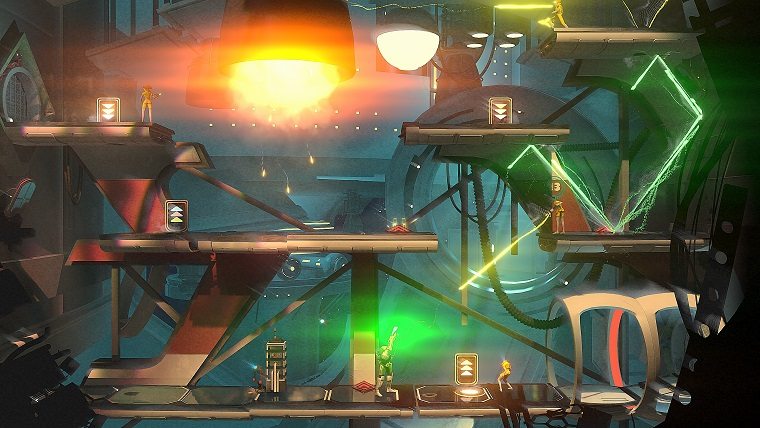 Thankfully, Headlander also has an upgrade system that allows you to cope with some of its more grueling challenges. You’ll get upgrade points both by completing main/side-missions and collecting energy that is hidden throughout the game, which goes towards things like improving attack power, defense and boosting your various abilities. This encourages you to explore every nook and cranny to remain up to snuff, and that’s really what any self-respecting metroidvania should do. The skill tree is also kept generally simple, meaning that you won’t be wasting too much time worrying about where to spend your upgrade points.

Double Fine was able to take a classic gaming genre and imbue new life into it with their trademark humor, and the resulting experience is solid. Just floating through the demented world that they’ve created is enjoyable thanks to the wonky characters you’ll come into contact with, and the mechanics are unique despite existing within a pretty standard genre framework. It could use some tweaks here and there, but fans of metroidvanias are sure to have a great time floating through the ridiculous world of Headlander.