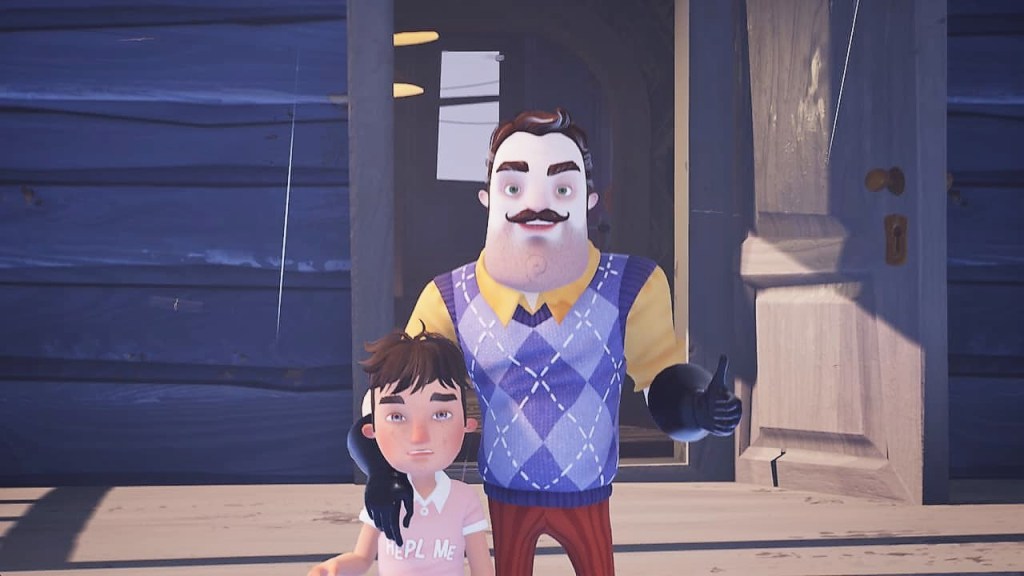 Hello Neighbor 2 is the newest entry in the Hello Neighbor franchise, which continues the story after the events of the original Hello Neighbor game that came out in 2017. You might wonder what is new to this game compared to other entries that make it worthwhile. Well, the biggest feature the developer boasts about is the complex Neighbors controlled by advanced AIs that are supposed to make your time investigating the neighbors of Raven Brooks scary. Did the developers accomplish their goal, or does this feature fizzle?

Hello Neighbor 2 is set in a small American town called Raven Brooks, Missouri. Unlike previous entries in the Hello Neighbor franchise, you can fully explore Raven Brooks… sort of. There are a lot of fun places for you to explore, but many of the houses cannot be entered. For instance, you will see a lot of basic house models with a generic interior and have no ability to explore them.

Ravens Brooks’ fascinating history dates back to the 1960s in Hello Neighbor lore. If you’ve never played the previous entries or read the books, you might want to check them out to fill in the gaps of the Mr. Peterson story, the town, and its residents.

The Cast – The Neighbors

Mr. Peterson, the antagonist from the original game, returns, and several of his neighbors feature in the sequel. Mr. Peterson’s neighbors include Gerda, the town’s baker, who makes the most delicious croissants (hint, hint). A taxidermist named Mr. Otto who carries a shotgun but can’t hit the broad side of a barn. The Raven Brooks Mayor who has apparently won more awards than Michael Jackson.

With this in mind, every neighbor has a residence that brings a unique environment for you to solve puzzles. However, I didn’t feel like I was discovering any scandalous secrets of the Raven Brooks neighbors, which was a bit disappointing. With that said, it was fun to see into the lives of the residents and interact with their homes in funny ways.

The Story – Solve the Case of Mr. Peterson

While you don’t need to play the other entries in the franchise, it does help to understand the bits and pieces of the story you learn about Mr. Peterson, his son Aaron, and the residents of Raven Brooks during your investigations. The story continues after the events of the first game, where Mr. Peterson flees with his son from the basement of his house. In Hello Neighbor 2, he decides to hide in the town’s museum, and your goal is to figure out why so you can bring him to justice.

Hello Neighbor 2 begins with a short cutscene where Quentin, an investigative journalist, is staking out Mr. Peterson’s home. This turns out to be the worst stakeout in the history of stakeouts because Mr. Peterson sees him immediately and chases him off. After the cutscene, you gain control of Quentin, who turns out to be Hello Neighbor 2’s protagonist. As Quentin, your entire goal is to investigate the houses in Raven Brooks to find clues to solve the case of Mr. Peterson.

Every house you investigate will bring you one step closer to solving the case… or will it? I honestly have no idea why neighbors of Mr. Peterson would have keys to the museum and evidence we can use against him, but we’ve seen weirder storylines in games before. The more evidence you uncover, the more you realize that this case isn’t just a run-of-the-mill kidnapping but a heart-wrenching story involving his deceased family and his son Aaron.

Based on the game’s description, I played Day 1 like a stealth horror game and became extremely frustrated with how the AI-controlled Neighbors acted. For instance, each Neighbor is supposed to be controlled by multiple AIs making them smart, but my experience was exactly the opposite. The pattern in which they would patrol the house didn’t make sense, making my sneaking around the house hard.

Another example is being trapped in a room as the AI stand in the doorway even though I was hidden and not spotted. After all this, I finally decided to take control of the house. If they saw me, I would just run out of the house one way, enter another, and continue my business. Rinse and repeat for about eight more levels, and you can see why it broke the immersion of what the game was trying to accomplish.

On the other hand, the puzzle-solving was a lot of fun and kept me interested in the game after the AI-controlled neighbors fizzled out. A few puzzles got me thinking and took longer to figure out than expected. For instance, finding the last picture piece on Day 1 was especially challenging.

The majority of the puzzles, though, are hidden behind simple logic. It is important that you don’t overthink them because you will waste time and become frustrated. There is a puzzle in the first house where you must figure out the combination of the safe sitting on a desk. The game doesn’t give you any hints for this puzzle, but it is pretty easy if you pay attention to your surroundings. Sitting next to the safe is a lamp pointed upwards, with its light shining on a flag banner. This should be your first hint about what needs to be done to solve the puzzle.

After that, there are colored children’s blocks, each with a different number, that you collect. All you have to do is match up the block’s color in the order of the flags to get your combination. This type of puzzle is generally used throughout the game, so pay attention to your surroundings and don’t overthink them!

Yes… This is the buggiest game I have played and reviewed in a long time. The AI-controlled neighbors would often glitch out and get stuck, like a cop from Day 1 who constantly went in and out the same door and quit responding to my presence, so I had free reign of the house. He was glitched so severely that he would exit the house going forwards and re-enter walking backward. I felt like Rip Torn in the backward man scene from Freddy Got Fingered (look it up and thank me later). It was an experience that took the stealth and horror out of stealth horror.

On Day 4, I got caught by The Mayor while climbing a ladder, and when the game reset, I could fly around the map (see photo above). I had some fun with this bug and flew around Raven Brooks until I got bored and reloaded my save file, which fixed the issue, but you’ll be doing this a lot, unfortunately.

The worst bug, though, was so nasty it broke my game to the point that I couldn’t progress the story. I had to reset my progression and start the game over on a clean save file. Right before I hit the part of the game with the bug for the second time, I manually backed up my save file to drop it back into place if it happened again.

No player should have to worry about that type of bug or have to back up their save file manually. However, I did report the bug to tinyBuild, and they mentioned they were well aware of the issue and will hopefully have it patched out soon. Still, the issue left a bad taste in my mouth and made it hard to recommend it to others. I’m hoping all of the early access and beta testers will help tinyBuild and Eerie Guest quickly patch the bugs before the general public gets their hands on the game.

The featured image in this review was taken from one of the in-game cutscenes, which sums up my experience with Hello Neighbor 2. I wanted to enjoy this game, and it kept telling me it would be okay, but deep down, I knew it was not. There were so many bugs that it broke my immersion, and I was just worried about running into more bugs, which became an exhausting experience.

The stealth horror aspect fell flat, and I had more fun just free roaming at will and abusing the AI-controlled Neighbors, sometimes to a glitchy death. Once you realize this is possible, it will make the game less frustrating but unsatisfying. The game’s only saving grace is the puzzle-solving, which was a ton of fun. I honestly believe if the developers tinyBuild and Eerie Guest focused on a puzzle game that doesn’t rely on the AI of the “Neighbors,” they would have a way more successful game.

I went into Hello Neighbor 2 feeling like those delinquent kids in Don’t Breathe but instead felt like I was visiting Pee-Wee’s Playhouse, which is an insult to Pee-Wee himself.