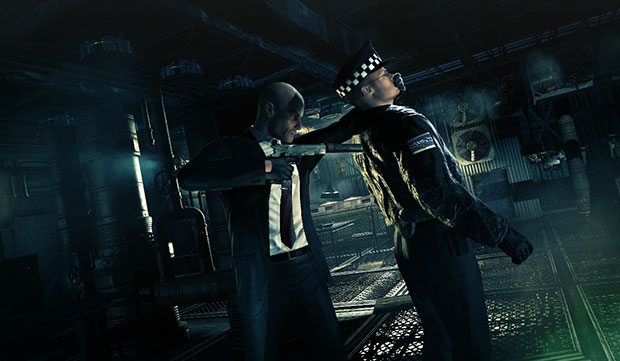 Stealth games as a genre have been in decline this generation. We’ve seen video game publishers move away from games like Hitman: Absolution in recent years, due to their inability to draw the masses like their shooter counterparts. Despite these headwinds, IO Interactive’s Hitman: Absolution is a game that Hitman purists will enjoy. It’s a game that stays true to its roots, that isn’t trying to be something else, while featuring the technology improvements that are expected after a six year hiatus. Agent 47 has been gone for a while, and that’s precisely why this action/puzzle/stealth mash-up is a refreshing change of pace from a gameplay perspective, but falls somewhat flat in its execution of said premises.

Games that offer the amount of choice and freedom that Hitman: Absolution offers are usually ambitious endeavors. With the Hitman franchise, this level of freedom has been unprecedented. You play as Agent 47, a hitman that finds himself in the midst of conspiring forces within the agency he works for. When personal ties get between him and his job, he vows to uphold a promise and protect a young girl. A more ambitious story than that of previous games, it wouldn’t be fair to get into the twists and turns of Agent 47’s journey, but this Hitman revamp is one that definitely goes bigger in this regard than any before it.

Hitman: Absolution unfolds like other titles in the series, you are given a myriad of choices and ways to kill your targets. Levels vary from massive crowded areas to smaller more intimate surroundings, with numerous disguises to be used, weapons and items to uncover, to be mixed and mashed to orchestrate the “perfect hit”. This “perfect hit” is deemed by a scoring system that gives and takes points as you perform actions in-game. The game promotes stealth prominently as the method of choice for completing your objectives, killing your targets, and escaping to the next level. Depending on a variety of disguises that can be used, the mission mini-map will change to show who can recognize you and who cannot. Combined with a blending tool, you can use disguises to quickly sneak past people, stealthily take out your targets, or just explore an area you otherwise couldn’t enter without detection. As expected, each level in Hitman: Absolution is dynamic. There are numerous ways to attack any given scenario, with each level consisting of numerous environmental traps, items that can be used and combined for deadly kills or diversions, and aforementioned disguises that Agent 47 can take on to avoid detection. It’s a facinating premise, that offers a ton of replay value as levels can play out in so many different manners.

IO reinforces that you go back and play in different ways as well. They’ll give you character bonuses for completing missions in different ways, which allow you to make your character an even more proficient killing machine. Going through the game in a single playthrough, with a single style, won’t unlock you everything there is to see in Hitman: Absolution. Players earn rewards for taking different routes and methods to completing each level’s overall goal. Different perks can be earned in completing different objectives, and increase Agent 47’s skill set. These range from better shooting accuracy with a multitude of weapons, to faster health regeneration. You’ll need to play each level multiple times to earn them all. However, the likelihood of players wanting to invest this much time will probably boil down to just how tolerant they are to the game’s obvious shortcomings in a few key areas.

These problems range from the glaringly obvious to the more knit-picking. While the game engulfs you in some of the most beautifully rendered dynamic environments of this generation, the AI and its logic are infuriatingly stupid. Making you question why you are being so careful in the first place. You’ll kill people in plain sight and not be noticed at times. You’ll pick off a group of enemies whose sole purpose is finding you, and they’ll idiotically wonder who just shot their co-worker in the face. Some bald-headed dude in suit carrying around a axe? Perhaps he’s going to chop down a tree. The game constantly puts you in these situations, seemingly forcing you to take notice of how dumb it is. Furthermore, there are serious problems with some actual interaction with the game world. With many missions being time sensitive, things can get frustrating when on-screen prompts don’t work. Items that are close to one another will frequently be inaccessible, this is most commonly seen when trying to dump bodies that are in close proximity to weapons that have been dropped. You’ll find yourself in an endless loop, and a frustrating one at that. Checkpoints are also oddly broken in Hitman: Absolution.  As you progress through a level, you can choose to save your progress at pre-determined points. The problem is, when you have to restart at these points, any enemies or AI in the area will magically respawn if they’ve already been eliminated. It’s a game-breaking problem that needs to be addressed. Hopefully there is a patch inbound.

Despite these problems, Hitman: Absolution is still a game that at times can be a joy to play. It’s a challenging game, that requires patience and thought. This patience and thought quota ramps up significantly when tackling the higher difficulty levels, where the training wheels are taken off for Agent 47. These higher skill levels remove the tool tips and other perks that make life easier, but here you’ve got an unforgiving game that stealth purists will thoroughly enjoy. Taking this concept to the next level is the online “Contracts” mode, where players can tackle challenges issued from other online Hitmen from across the globe, or create their own hit contracts. Eliminate, escape, and get paid is the premise for Contracts Mode. You’ll be tasked with making hits with specific mission parameters in place, earning more points for completing your objectives in the manner that they are assigned. The conditional bonuses are put in place by the contract maker, who has had to have completed the contract in order for it to be created. Anything you can pull off in any given level, can be written as a contract. Kill specific targets, with specific weapons, escape to specific routes, utilizing only the techniques afforded you in the contract. For each contract that you complete, you’ll earn cash. This cash can be used to purchase unlockables, and goes towards a global leaderboard, that tracks which countries have the best Hitmen.  Like all upstart online modes, this one is going to depend on the community.  If Absolution sees a strong following and a creative bunch of contract makers, this could be one of the most original online modes in recent years.   If not, it will flounder out without ever reaching its true potential.  IO has said that they’ll be stocking some missions in for good measure, but the best stuff usually comes from the community in these types of games.

Hitman: Absolution is a game that going to require you to forgive it at times.  It’s a shame that for a franchise that’s been gone so long, it’s return is marred with problems. There really are some beautiful in-game cinematic moments in Absolution, coupled with some of the most ambitious stealth/puzzle gameplay that we’ve ever seen. If you have a high tolerance for bugs and can laugh off the stupid AI and other problems, you’ll likley enjoy Absolution immensely. If you’re looking for perfection, you won’t find it here.