I Am Setsuna Review

The latest news in the world of video games at Attack of the Fanboy
July 18th, 2016 by Dean James 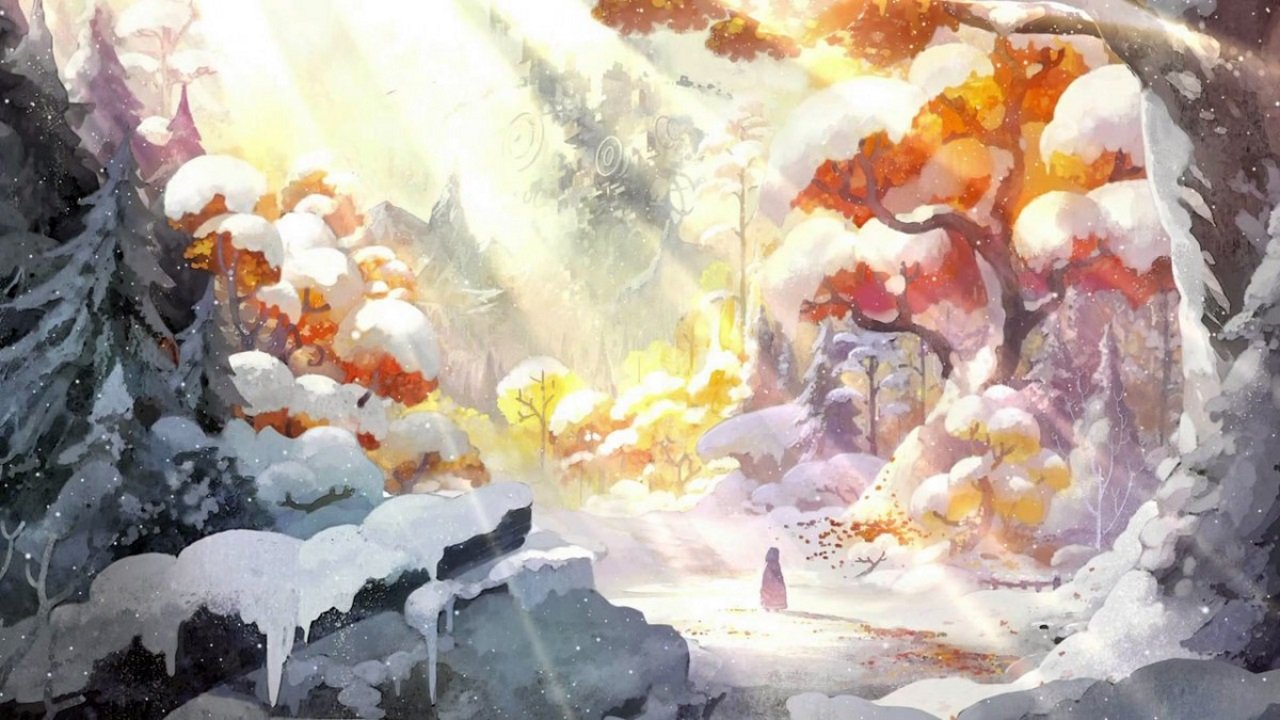 The SNES era was a spectacular time to be an RPG fan, with popular titles like Chrono Trigger still among the most well regarded games in the genre today. As these style of games have evolved over the years, they have lost a lot of what made them so special back then and Square Enix is now looking to recapture that classic feel with I Am Setsuna.

Coming from Square Enix’s new developer Tokyo RPG Factory, I Am Setsuna takes place in a snow covered region that is consistently attacked by monsters, with a sacrifice being sent on a pilgrimage every few years to appease the lord, at least for a period of time. The protagonist, Endir, actually starts off as a mercenary that is sent to kill the would be sacrifice, Setsuna, with the story jumping off from there.

The game’s story is very well crafted throughout, with a number of intriguing twists, though it is not without its cliches. In fact, you can definitely see a lot of inspiration from other games in the genre, with the pilgrimage itself almost feeling like Final Fantasy X. The way the story unfolds is paced superbly, with it being expanded upon as you meet different characters in the game that even manage to tug at the heartstrings at some points.

Like many classic Square RPGs, you will be introduced to a few different characters throughout the game that will eventually join your team. What really works well here though is that every single party member gets a chance to shine from their introduction onward. It’s never just a case of someone joining the team and fighting, but rather it serves as a way to push the plot forward as well. 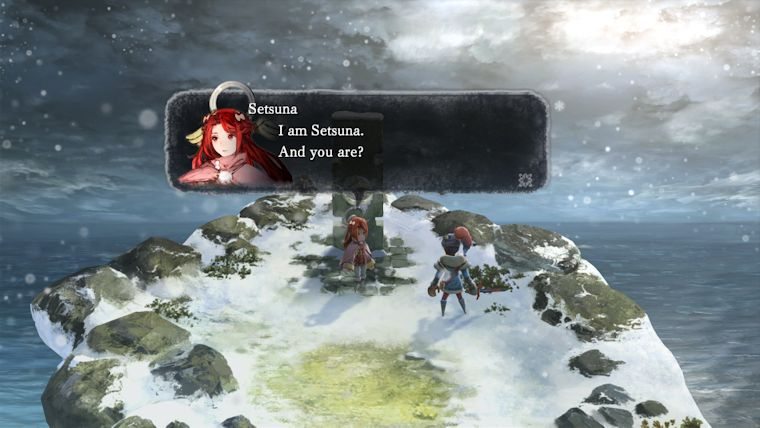 I Am Setsuna utilizes the old school mechanic of allowing the player to name each of the playable characters in the game, due to the lack of actual voice acting. You can turn on battle voices, where they yell out when attacking, but the dialogue is restricted to text otherwise. This was an excellent decision by the development team, as instead of focusing on what could have been disappointing voice acting, now the focus is on the game’s extraordinary piano-based musical score.

The world of I Am Setsuna is a beautiful snowy landspace throughout, as you are on this pilgrimage to make the sacrifice to the lord in an angled top-down perspective. There are definitely different environments such as caves and ruins, but the lack of overall variety is a little disappointing. However, the constant snow is acceptable due to it fitting the harsh theme of the world inside the game, as well as the well designed physics involved.

Whenever you are outside in the game, everywhere will be snow covered. Many games have this, but I Am Setsuna takes it up another level by making sure that every single walk through the snow by a character actually clears a path, which is then subsequently filled back up with the falling snow in real time. This is also present during battles, with both your characters and the enemies making tracks in the snow with their movement. This little attention to detail truly shows how much love and care the developers put into this game.

As you move around each area in the game, there are no random encounters, but rather spawning enemies on the map that are in the same areas each time you re-enter an area. Running into these enemies will trigger a battle sequence, with you immediately able to attack if you sneak up on them from behind. Rather than having to load a battle area though, it takes place right where you run into the enemies, which helps to streamline the experience tenfold. 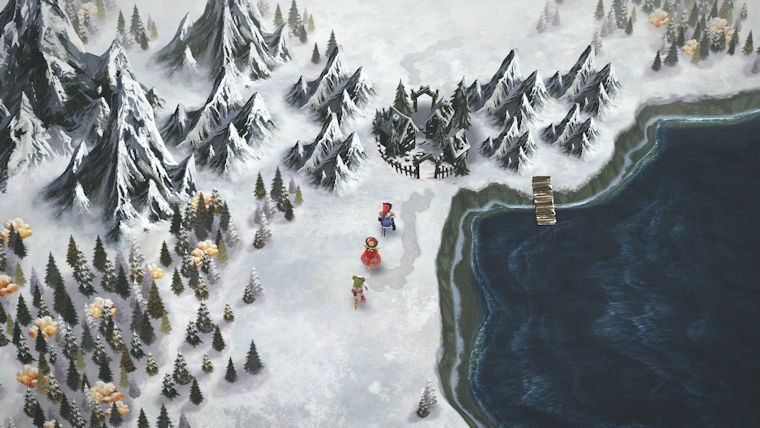 I Am Setuna takes great inspiration from Chrono Trigger, but there is no area it does so more than in the combat. The game utilizes an ATB style where each of your three current party members have a cooldown meter that shows when they can attack again. Certain characters like Aeterna will have a much faster loading meter at the expense of less attack power, while Nidr takes longer to fill the meter, but can deal much more damage at once.

Each of the available party members you will come across in the game are all very well balanced as well. While you can only have three out at one time, you can switch between them whenever you’d like outside of combat. This allows you to try out the different combinations of characters to see which is the most ideal for a given situation, with certain characters having special combo attacks that they can use together. There are some points where certain characters leave the party, but it’s not like some games where you consistently are stuck with a set trio for long periods of time.

Whenever it is a characters turn, they can choose between Attack, Tech, or Item. Every character only has one Attack move, but a lot of different Tech moves. Tech are mostly received through the Magic Consortium, though they can occasionally be found in chests throughout the game. Defeating enemies will provide you with a lot of materials, along with ones you find glowing on the map, which can all be taken to the Magic Consortium person in each town to sell them back for in-game money, as well as being able to redeem them for what are known as Sprinite in the game. 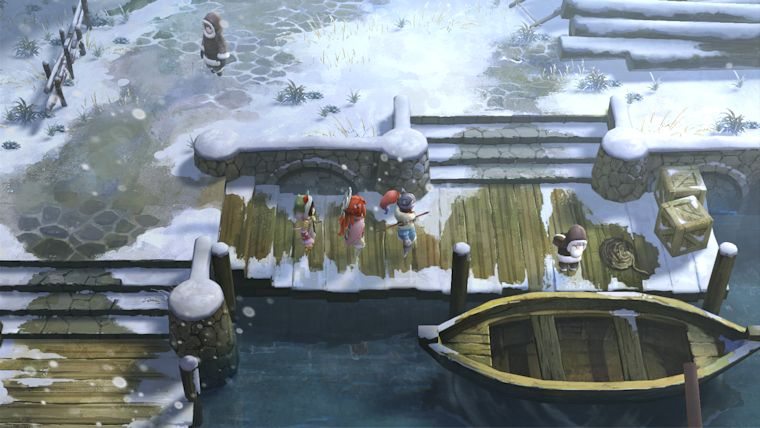 Sprinite is just the game’s fancy name for spells, with each character having ones specific to them, as well as there being ones that anybody can equip. These range from powerful attack moves to healing spells and buffs that you can place on your team. These aren’t as necessary early on in the game, but as you come across bosses and regular enemies with much more speed and attack power, you will need to take advantage of these.

Focus is on the game’s extraordinary piano-based musical score

Beyond the Sprinite, you can also purchase or find more powerful weapons for each of the party members, which becomes rather easy with the amount of money you make selling materials. There is no equipment system in the game for armor, but you can equip a variety of different Talismans that you’ll find in the game. The Talismans are incredibly confusing though, as the game does not really explain what they do, except for the ones that reveal enemy HP in battle.

Also somewhat confusing is the game’s Momentum system that gradually increases with each move you make in battle. These can make improvements to your character like improving critical hit chances, which can be combined with fluxes caused by Talismans. However, these both could have been better served if the player had more control over these power-ups, rather than them just occurring the deeper you get into battle. 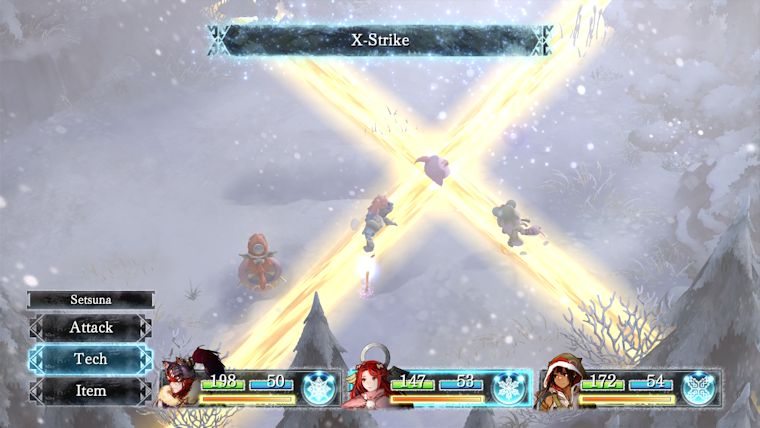 The enemy variety in I Am Setsuna is pretty solid, with some really requiring a lot of strategy. While it can be difficult to maneuver your character around in battle, you can use certain attacks to knock enemies away. This can become very important against the variety of different Puff-Puff enemies, as you can’t outright kill them. Instead, when they lose all their health, they will self-destruct, with you not wanting to be nearby. This adds a lot more strategy to the combat, which works well as a complement to the more straightforward battles.

While Square Enix is largely focused on the future with upcoming games like Final Fantasy XV and Kingdom Hearts 3, they are not one to forget the past, of which I Am Setsuna is a perfect example. Taking a character driven story that will keep players coming back for hours and combining it with a classic gameplay style works exceptionally well, making I Am Setsuna one game that not just ’90s RPG fans will love, but even general fans of the genre should really enjoy.

I Am Setsuna playstation PS4
"loved"