The latest news in the world of video games at Attack of the Fanboy
November 3rd, 2010 by William Schwartz 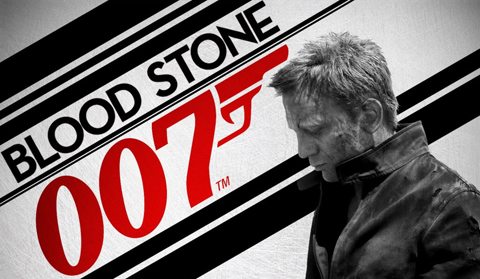 An international conspiracy has placed the UK’s most secretive bio-chemical project into deadly hands, and only Her Majesty’s most lethal agent, James Bond, can unravel the mystery. To navigate through layers of corruption, you, as Bond, will embark on global chase that will have you battling on land, sea, and air through Athens, Istanbul, Monaco, and Bangkok. Nothing is what it seems as each adventure reveals a deeper and more sinister conspiracy. Engage in precise cover-based gunplay and tactical firefights, and speed your way through explosive adrenaline-fueled driving sequences. Become Bond as he engages in intense hand-to-hand combat and uses his environment to finish off enemies. Take the battle online in a 16-person multiplayer mode that requires skill, teamwork and strategy as you compete in matches that will have spies battling mercenaries. In the fight to prevent the world’s most dangerous weapon from falling into the wrong hands, you’ll need to be the ultimate secret agent. [Bizarre]

James Bond 007: Blood Stone was a game that took me a little bit by surprise.  I was expecting a very boring run of the mill third person shoot em up, and what I got was a very competent effort from Bizarre that both looked great and played great.  As you may have guessed you will be assuming the role of 007, and as big as the action of a big budget Bond film is, Bizarre managed to create a game that captures the essence of the iconic film character.  Frantic driving sequences really top the list of the things that I like about the game, even though there weren’t that many of them.  The overall presentation of the game is rock solid.  Played on my PC via the Steam service the game looked amazing, whether or not that was just my graphics card giving me a little extra horsepower and eye candy is up for debate as I haven’t played this game on either the Xbox 360 or PS3.   And the music cranks up at just the right time to help the lackluster story along, it really heightens the otherwise non-existent tension that should be there. 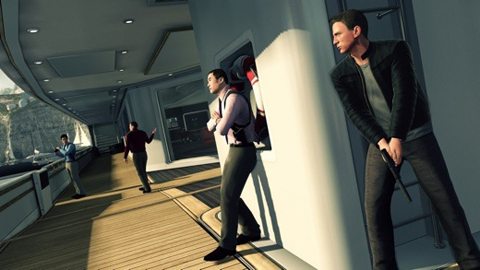 It was pretty obvious what Bizarre was going for with Blood Stone.  As a big Splinter Cell fan you can’t help but draw some serious comparisons between Blood Stone and Conviction.  There is a healthy dose of stealth in Blood Stone and those familiar with the Splinter Cell franchise will definitely appreciate their efforts to include it.  Much in the same way that Mark and Execute worked in Conviction, Blood Stone allows the player to gather up to three focus shots.  These focus shots basically insta-kill up to three enemies in a slow mo fashion.  You will also have a wide arsenal of stealth take down moves to pull off and they can really help clear out a room before going in.  But if you’re not much for the theatrics you can always just rely on the cover system, which again is very similar to Conviction allowing you to move from cover to cover gaining tactical advantages. It’s fairly straight forward mechanic in the shooting department.

There are some real flashes of brilliance in 007 Bloodstone.  Some times where you think the game is going to start throwing new things into the formula, but it just never happens.  The end result is something that makes the game feel a bit tedious at times.  The mechanics as noted above are fairly standard and rarely deviate from the third person cover and shoot and as a gamer I breathed a sign of relief as each chase sequence unfolded into a car chase scene if not just to break up the monotony of the game.  The weapons are hardly differentiated aside from the Sniper Rifle and Grenade Launchers but I must admit the tasers were clever.  The game does come in at around 5 hours so it doesn’t give you much time to get bored, but that really shouldn’t be the case now should it? 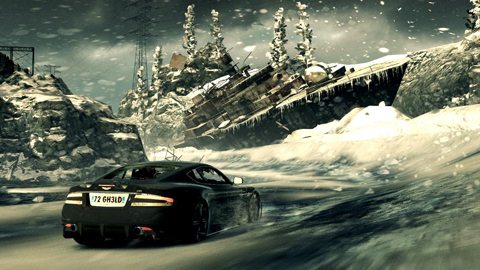 I really must have a phone like Bond’s.  It is the most powerful item in his arsenal.  It tells him exactly where to go, exactly where the enemies are, and hold his hand like his ‘na ‘na.  It’s this type of hand holding that really make games today border interactive movies, and not the challenging visual puzzles that they once were.  Don’t get me wrong, I hate being stumped as much as the next guy, but giving you access to everything all the time is a little much.  You cannot expect someone to not use the tool throughout the entire game if no cap is put on the use of the item.  So for that reason you will constantly be utilizing Bond’s smart phone to tell you exactly which way to go, and where enemies are.  There is little room for surprises, and furthermore the green night vision like haze that appears when using the phone takes away from an otherwise colorful and well put together levels.

Watching the cutscenes for 007 Blood Stone you realize what this game could have been with a little bit more interaction included in the games tensest moments.  The crescendo events all take place without any input from your character.  Sure, QTE’s have been severely overblown in recent years.  But, there’s a reason why developers use them, and it’s to keep the gamer engaged in the game’s biggest moments.  Sadly Bond 007 Bloodstone fails miserably here.  They went as far as to mimic Splinter Cell Conviction in so many areas that I was surprised to not see the same interaction when dealing with the many “bosses” of the game.  Instead it usually just boiled down to hitting a lever and watching a movie which wasn’t cool at all.

James Bond 007: Bloodstone was not a terribly bad game it wasn’t terribly good either.  Taking alot of its core game mechanics from one of the best games of 2010 surely made it at least tolerable, and at times very satisfying.  The car chases you can put on par with a big budget motion picture and can really get your adrenaline pumping, until you inevitably leave the car and begin your next level that feels exactly the same as the last.  If you are into the genre, you would probably have a great time with Blood Stone if for just a rental. Even with a competent multiplayer offering, it doesn’t have the community to support a long lasting and value adding experience.  And at just under 5 hours the game is a great rainy day rental.