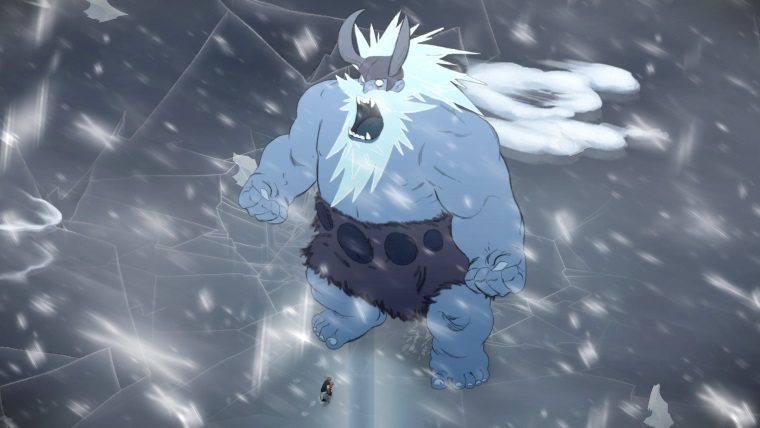 Kickstarter has been responsible for some great indie games over the last few years. Of course, it has also been the source of frustration and skepticism as some projects fail to deliver on their promise. Jotun took to the crowdfunding platform with the promise of a hand crafted adventure based in Norse mythology, featuring “the mysterious romantic mood of Journey mixed with the scale of the boss fights in Shadow of the Colossus in top-down 2D.” A very lofty promise, but one that Jotun meets with ease.

Jotun tells the story of Thora, an impressive viking warrior whose tumultuous life ends in an inglorious death. Her death came at the hands of the sea, rather than an enemy’s ax, so she will have to go through the trials of the gods, impressing them with her combat abilities and strength, in order to enter the gates of Valhalla. She’ll have to journey across various lands and fight the jotun, giant creatures built around the central Norse theme, to show her worth. 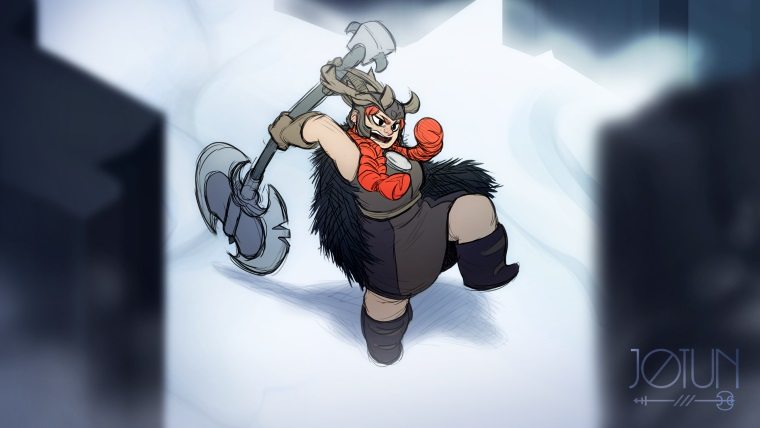 The first thing that players will notice about Jotun is the gorgeous art style. Using all hand drawn elements for its world, the game creates a living cartoon of sorts. We’ve seen just a few games go to this style lately, as it creates a unique look and feel for video games, but few have done it as well as Jotun. Beautiful vistas give way to smaller interactions between the player and the world. The art itself is great to look at, but the way everything moves, using fluid motions that have that classic cartoon feel, is something to behold. Fans of visual design will eat up every second of Jotun.

The visuals aren’t the only treat hidden inside of Jotun though. Backing this up is a fantastic soundtrack that evokes memories of Journey. Of course, this is an indie title, so it doesn’t quite live up to that Grammy nominated masterpiece. There are times when the music falls to the background, not contributing much and feeling a bit repetitive. However, when it kicks into gear, such as in the boss battles, it really delivers.

With such flair in the visual and auditory departments, it is almost a good thing that the gameplay has been kept relatively simple. a top-down 2D adventure, Jotun tasks players with exploring a few levels before facing off against the jotuns. Playing as sort of a Mega Man-esque adventure, Jotun allows players to choose their own path through the game. Before each boss you must locate two runes in different levels. The levels themselves are somewhat interesting, though many lack an overall feeling of fun that can be found elsewhere in the game. They are sort of the requisite calm before the storm. While you might enjoy the calm itself, it isn’t the reason you are playing the game, and it can sometimes feel like a chore. 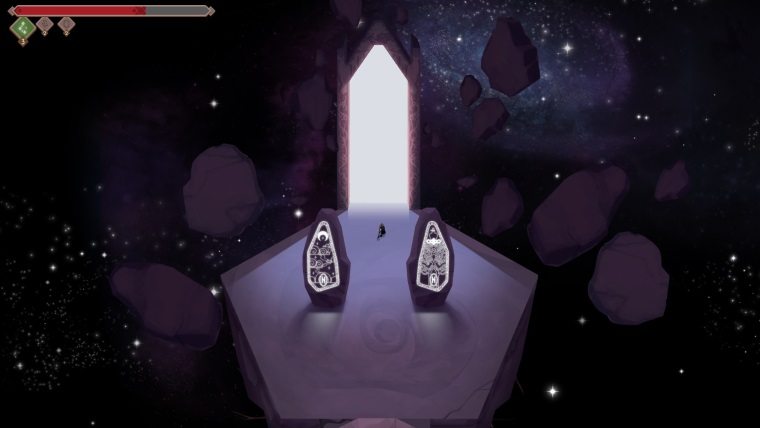 To spice things up these levels can be tackled in any order, with some giving boosts to health and/or a special ability, if you go looking for them. Having trouble defeating one of the bosses? Head to the next level and gain its ability or health boost before trying again. It’s a wonderful formula that works extremely well here. The only real issue that this creates is the unimportance of actually taking on the jotun themselves.

These short sections of the game are tense, tightly designed encounters that will compel you to become a better player

To beat the game you have to defeat all five Jotun, but actually beating them yields no direct reward. The special abilities and health boosts are found in the pre-boss levels. It would have been nice to lean even more toward the Mega Man influence and give Thora some new power for beating each boss, making it feel all the more rewarding. As it is, the only true benefit for taking on the jotun, other than beating the game of course, is the thrill of the fight. Thankfully this thrill is enough to propel the game forward, as it is truly some of the most intriguing and complex fights players will find this year.

When I say complex that doesn’t necessarily mean in the mechanical way, in fact Jotun is a gleefully simple game at its core. Taking out the optional special powers you really only have two attacks, along with a roll mechanic. However, using these you can formulate new strategies to take out the jotun, and the occasional other enemy. Figuring out the patterns is the main key, as each will attack in different ways. Is it better to keep your distance, moving in at the opportune time, or should you be right under him, whaling away at his ankles as much as possible? This seems simple, but once the various attacks and environmental elements get mixed in it becomes extremely fun. 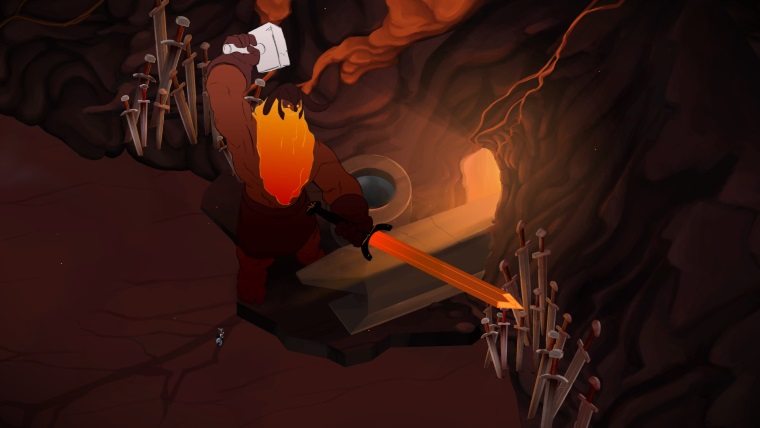 Each fight can take upwards of 10-15 minutes, with failure making you start all over again. Figuring out a plan of attack helps, but there’s always the “final form” to deal with, along with a couple of other altered attack patterns. It has the same sensation as Shadow of the Colossus, where each fight has a heft and weight to the proceedings, making victory feel all the sweeter. These short sections of the game are tense, tightly designed encounters that will compel you to become a better player, or bang your head against the wall in utter frustration. If you manage to pull through you feel a true sense of accomplishment, which has been sorely lacking in some modern games.

Unfortunately, with just five main bosses, these encounters don’t make up quite enough gameplay by themselves, unless you’re truly invested in the game. While you can replay through the game, there’s nothing quite like that first time through. Having to figure out the best strategy to take on the jotun, then seeing it work out in the end was the best part, but that part is over far too quickly.

Jotun began by promising an experience that combined the mood of Journey and the boss battles of Shadow of the Colossus, two of the best games of all time. In its own way it meets these expectations. It has a few flaws, but those are quickly made up for by the fantastic hand-drawn art style, the cartoon-esque animation, a fantastic soundtrack, and a great core bit of gameplay. The experience may be short, but it will be one that many gamers remember very fondly once it is over.