Tons of potential that never gets fully realized. Depending on who you ask, the release of Just Cause 3 in 2015 marked either a new high for the series or a new low.  It was clear that Avalanche had much grander ambitions with the third game in the franchise and for the most part they made good with a pretty incredible physics based system and a bigger game in terms of size and scope.  Just Cause 3 was impressive because it was a generational leap for the franchise.  With Just Cause 4 the series is just as polarizing as ever. On one hand you’ve got a throwaway story, questionable visual fidelity, and mundane mission structure.  On the other, Just Cause 4 gives you the tools to create destruction on a massive scale, unlike any game.

This iteration of Just Cause is once again a game that fails to realize what its true strengths are.  The sandbox nature of it often takes a backseat to pushing a narrative along and forcing players into third person shooting combat that doesn’t accentuate the great parts about this game.  Play enough Just Cause 4 and it will likely both amaze and disappoint you in one sitting. 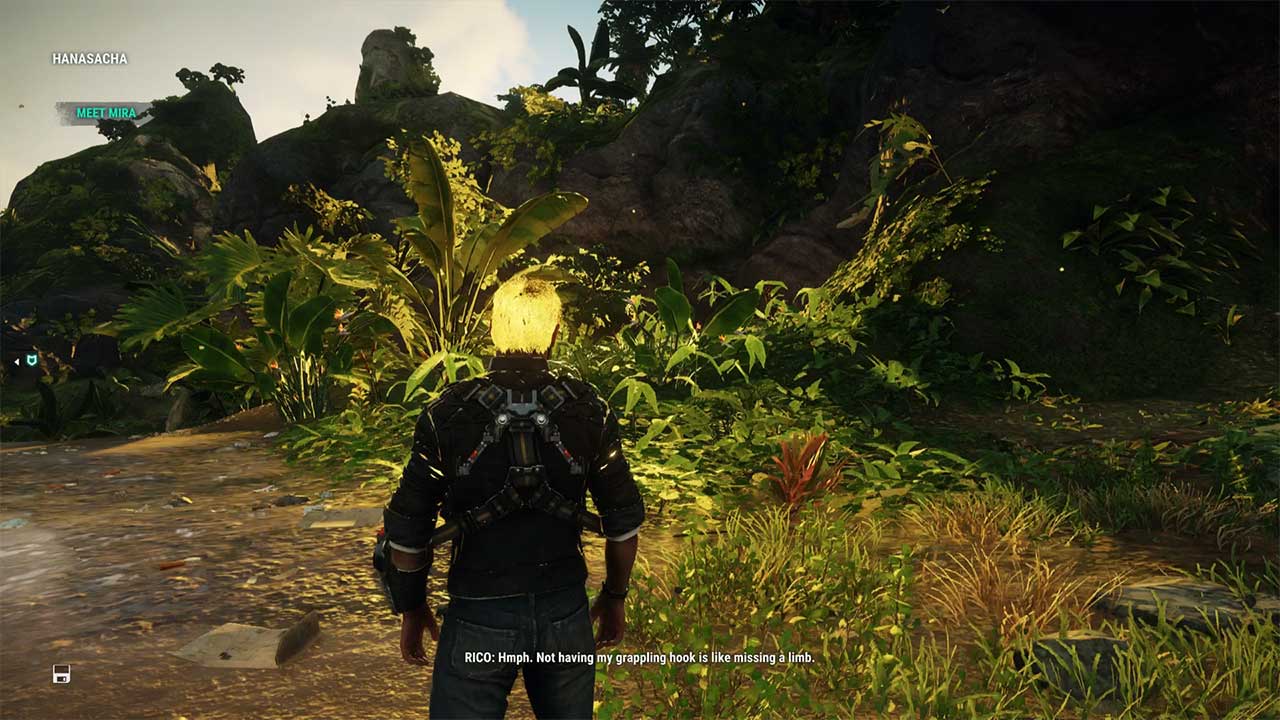 The story continues with the series’ protagonist Rico Rodriguez heading to a fictional South American country called Solis.  The location is under the control of newcomer to the Just Cause series as well as the familiar Black Hand army. The new antagonist, Oscar Espinoza, seemingly has ties to the previous villains of the other Just Cause games.  Your job, to start causing chaos in Solis and start taking its territories back from this PMC and Espinoza.  It’s fairly familiar if you’re coming directly from Just Cause 3.  There is a little bit more this time around though, both on the gameplay front and in the structure of the game itself.

Just Cause 4 has multiple types of missions that you can tackle to progress the story along. Solis is broken into multiple regions and the ultimate goal is to build your reserves and move your army’s front lines outward to push back against the Black Hand. You’ll do this mainly be causing chaos and destroying enemy infrastructure.  The familiar red structures can be destroyed through any method you like, and they’ll build your chaos meter.  When you level up you’ll get reserves which will allow you to push out into new territories and take on new missions.  That’s the main path at least.  You can also help a movie director shoot stunt scenes, you can go tomb raiding for treasures, participate in region strikes liberating areas, and hunt down all of the quest rewards that add tools to your inventory.  For the most part, this content can be played as you wish.  So long as you are continually expanding your territories you will gain access to story missions to further this narrative and gain access to new areas on the map. There are some hits and misses with the mission structure in Just Cause 4.  Just Cause 4 is at its best when the player is just messing with the tools they are given in this open world, and the mission structure doesn’t facilitate this as often as you’d hope.  Though you will be getting plenty of tools to experiment with this time around.  The wingsuit and parachute travel mechanic return, Rico’s grappling abilities get a major upgrade with the addition of mods to this tool that allow for even more tethering possibilities.  Yes, it’s still incredibly fun to tether things together and watch massive explosions.  Just about any way you can possibly think of to use these tethering tools to blow stuff up you can do in Just Cause 4.  With the new tools there are even more fun things to try with the an air lift and rocket boost mechanic having been added to the mix.  There’s certainly no shortage of fun experiments to try with these tools, and there are plenty of mods that can be equipped for each of the three grapple types.

The problem is, it’s not often that these missions actually task you with doing the amazing things you are capable of.  Instead, you’re usually pushed into a some sort of third person shooting situation where you are asked to protect an object for a certain amount or do something boring like flip a group of switches with your grappling hook.  While the shooting and combat is fine for the most part with a snappy aim assist feature and plenty of different weapons to choose from, the movement with the combination of grappling hook, parachute and wingsuit can feel nimble about as often as it feels clumsy.  With a little bit more creativity on the mission design front, we could see Just Cause 4 being a lot more fun to play.  We do see some glimpses of it with certain mission types here and there, but not nearly often enough to break up the monotony of the third person shooting. 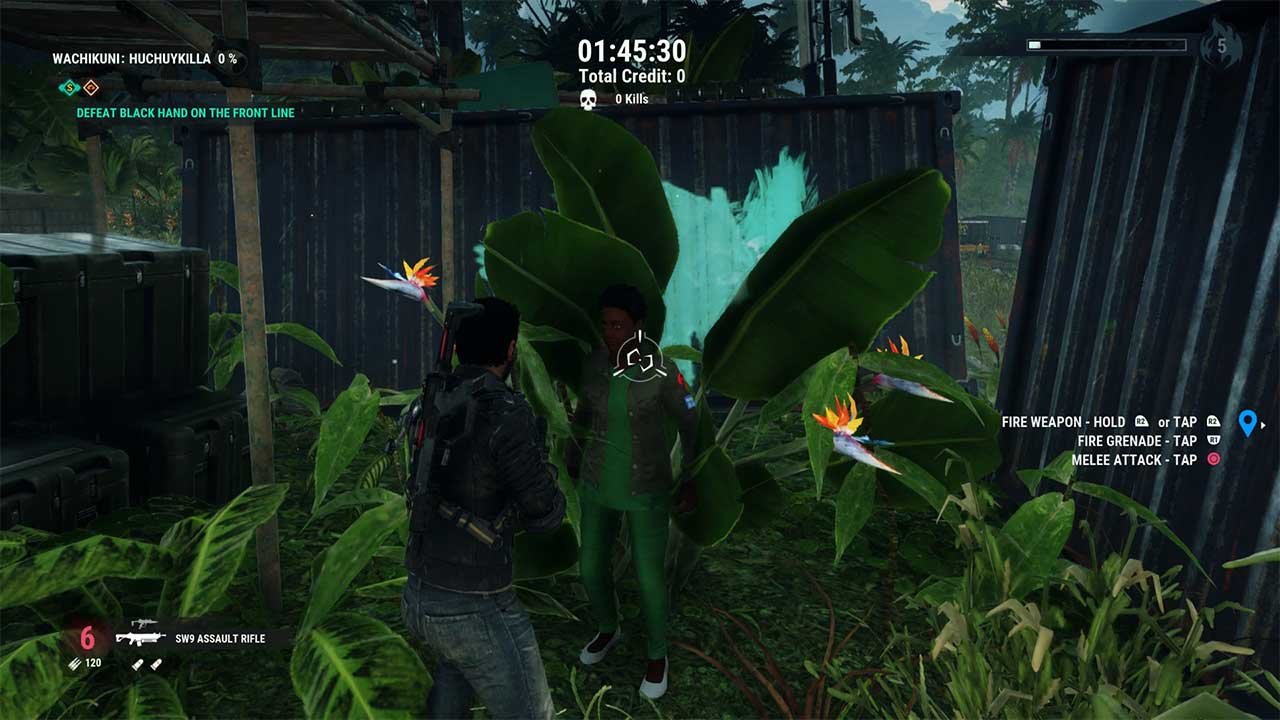 It’s not all bad in Just Cause 4 on the shooting front.  Things can get incredibly hectic out there, and the shooting is pretty darn enjoyable this time around.  There’s a gratuitous auto-aim feature that makes picking off targets pretty easy and the game is incredibly forgiving if you die in terms of checkpoints during a missions so it does pay to stay really aggressive which makes them more bearable over all.  There’s not much thought involved in the combat of Just Cause 4.  Shoot everything and hope to explode stuff and kill people in the process.  If there’s one gripe about it, is that when the auto-aim feature does not work the camera and aiming can be a little bit erratic.

A lot of things feel erratic in Just Cause 4, like vehicles as well.  One of your primary methods of transportation is in cars or other land vehicles and they even have a large side mission element so its a shame that they all handle so poorly.  Do just a couple of missions with a car, motorcyle, or other land vehicle and you like won’t do another.  It’s certainly not one of the high points of the game.  Air and water vehicles are a little bit better.  These issues all go back to the level of inconsistency that you find in Just Cause 4.  For one thing or moment that you find incredible you find another that isn’t.

Going forward Just Cause continues to feel like a franchise that isn’t quite reaching its potential.  A tonal shift in terms of story telling and missions that better take advantage of the game’s strengths could really go a long way in making this something more memorable and interesting to play.  As it stands, it’s an average open world game in year where there have been some of the best the genre has ever seen.  It’s bland third person shooting and repetitive missions starkly contrast the incredible possibilities that the physics based grappling system offer the player at any given time.

Just Cause 4 still has some of the best sandbox action around, but it’s a game where making your own fun is the best part about it.  If the developers could help players along in this regard by tuning missions to actually use these tools more frequently it could help this game feel more engaging. As it stands, Just Cause 4 more often than not feels like an average open world third person shooter than it does the explosion filled bonanza that it should be.