The latest news in the world of video games at Attack of the Fanboy
November 17th, 2013 by William Schwartz 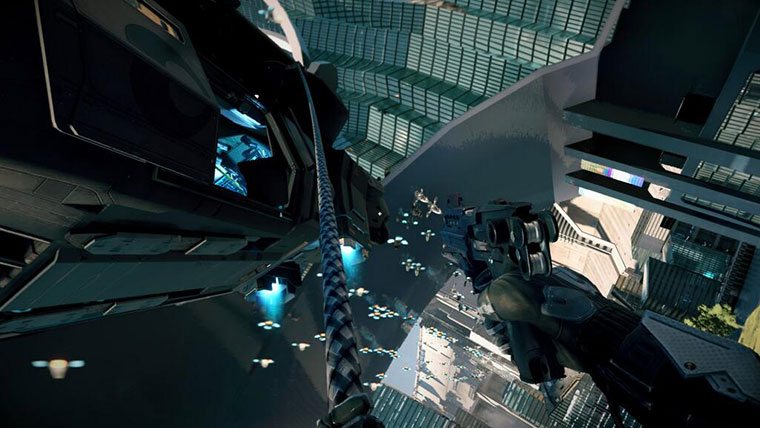 It makes a lot of sense that Guerrilla Games was tapped to make one of the first exclusives for Sony’s new PS4.  They’ve always been very reliable when it comes to making showpiece games.  The series has been known to provide some of the best visuals in the shooter space over the years, and their new effort on the PlayStation 4 is no different in this regard.  Killzone: Shadowfall is undoubtedly a great looking game, with visuals unattainable on the PlayStation 3.

It also feels like a game that could have used a couple more years in development.  Killzone: Shadowfall is full of concepts in both the gameplay and the story that never fully reach their potential.

Guerrilla has built an interesting world and storyline over the span of multiple games on the Playstation consoles and handhelds.  Killzone: Shadowfall focuses on a new generation of the war between the Helghast and Vektan peoples.  After the Vektan decimate Helghan following the events of Killzone 3, many years have past.  Helghan is a wasteland.  Destroyed to the point of inhabitability.  The Helghast survivors now live side by side with the Vektan people, separated by a wall to segregate the two races.  The story is told from the point of Lucas Kellen, a Shadow Marshal in the Interplanetary Strategic Alliance (ISA).  Tensions are at an all time high between the two factions, and the ISA are looking to wipeout the Helghast people once and for all.

There are a lot of moving pieces in the Shadowfall storyline that first timers to the series might not understand.  This game makes you examine just how good or bad each faction actually is.  The Helghast have always been portrayed as the “bad guys” in Killzone games, with their glowing red eye balls, it’s been easy to point them out.  Shadowfall puts a face on this enemy, showing you not only what you’ve seen in the past, but the pain and suffering that the non-soldiers of their race have endured.  Ultimately the storyline boils down to the morality of war.  Where your character must examine the choices that he makes as the story progresses.  There’s no real choice in Shadowfall, not of the branching storyline variety, but its a game that makes you think for the first time, of whether either side is actually in the right with wanting to decimate the other.   Kellen develops personal relationships in Killzone: Shadowfall on both sides of the wall, to a greater extent than has been seen in previous games.

Where previous Killzone games had you killing indiscriminately, Shadowfall makes you think for the first time.  It’s a big step in the story telling for Guerrilla when comparing it to previous games.  It adds a little more color and depth to the ongoing saga.  Though for the new characters that you are introduced to, it’s hard not to walk away from Killzone: Shadowfall wanting even more exploration.  Not only into the beautiful world that was created visually, but into the narrative of both sides of the fight.  Very little is fully fleshed out in Killzone: Shadowfall, leaving more questions than answers at its conclusion. 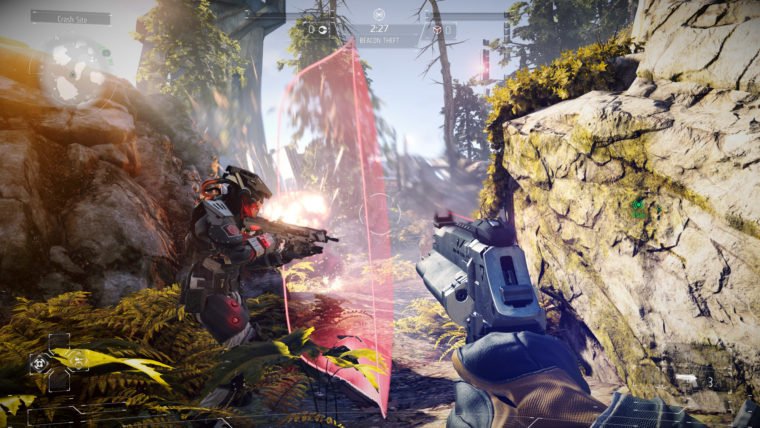 This want for more exploration in the story is only made worse by how beautiful the game is.  Technically, Shadowfall is Guerrilla’s best work.  Vekta is a planet that is equal parts beautiful and decrepit.   Sprawling backdrops show the Vektan planet in all its glory, and the story takes you from this massive city scape to the bowels of Helghan.  Overall, the world of Killzone: Shadowfall is more lush than ever before.  While the visual palette of the campaign is more varied than previous games, the gameplay is more varied as well.

Guerrilla tries some interesting new things for the Killzone series in Shadowfall.  Where previous Killzone games relied on visceral thrills and shooting galleries, big action set pieces as their main attraction.  Shadowfall’s gameplay varies considerably.  The most noticeable addition is in the OWL, a flying robotic companion that allows you to delegate offensive and defensive actions to it, as well as interact with the world in hacking and traversal bits.  It’s a shift in the paradigm for the gameplay in Killzone, and its a welcome addition.  The OWL allows you to target enemies and catch them off guard, or distract their attention.  It can weaken shielded enemies, set up a barrier to protect you when under heavy fire, and is an integral part of the game — especially in the bigger battles where more enemies can overwhelm you.  It also serves as a device which allows you to traverse the world.  The OWL can be used as a rappel device, setting up ziplines that can be moved across for fast traversal in varied terrain.  You can also shoot while on the zipline, and this provides for some sandbox elements to the combat.

But it’s not quite Crysis when it comes to this.  The levels in Killzone: Shadowfall are certainly big enough to have more choice in the way they are tackled, but they end up being pretty straight forward, traditional Killzone levels, despite the inclusion of the new tools.  It would have been nice to see Guerrilla actually spread their wings with the introduction to these new mechanics, but instead the new additions end up feeling under-used and in some cases unnecessary and ineffective by game’s end.  They really missed an opportunity to expand the scope of what to expect from a Killzone game when it comes to gameplay.  Which is why I couldn’t shake the feeling of this game having been rushed to completion to meet the launch of the PlayStation 4.  That, or Guerrilla just missed on execution of a grander vision for the series.

Single player also takes some chances with the inclusion of a number of zero gravity missions, and light puzzle solving affairs, instead of relying on spectacle laced shooting for the whole 10-hour campaign.  Unfortunately, this stuff just feels out of place.  One mission in particular has you scouring for energy keys to unlock doors and passages which requires a little bit of exploration and backtracking to complete.  It’s a totally different element to the game that is unexpected at this point, and one that feels like it was half-heartedly slapped in to offer a little more variety to the gameplay.  It serves no real purpose for being there, and left me scratching my head as to the how and why this was now part of a Killzone game.  It felt out of place.  Time probably could have been better spent in exploring the sandbox elements on the game’s bigger, more open levels.  Killzone shines when it’s you against massive enemies in disorienting combat sequences, and towards the latter parts of the game, there’s plenty of this to go around.  If  they could have committed to the sandbox elements that they’ve obviously started towards, Killzone: Shadowfall could easily rival a game like Crysis in both its looks and fun factor in the single player. 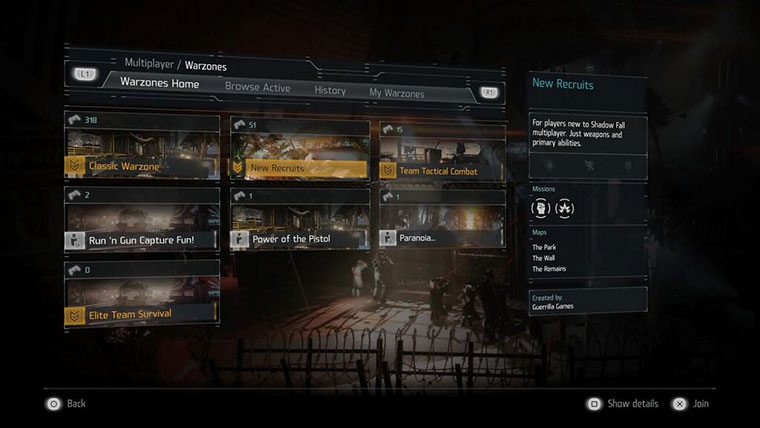 Where the single player side of things did take some necessary risks at adjusting the formula, multiplayer did not.  That’s not to say that Killzone: Shadowfall is a carbon copy of Killzone 3, there have definitely been some changes added to the mix.  Just not to the extent that was found in single player from a gameplay perspective.  It’s still a class-based affair, and one of the best looking multiplayer modes around.  Guerrilla adds some new functionality to the modes, but also strips away some very important elements to the game that made Killzone 3 such a blast to play online.

Shadowfall gets a big boost in the arm just by having the DualShock 4 this time around.  While it retains all the weight of the previous games, it’s a much more fun game to play with the new controller.  At the center of the multiplayer experience though, is the new Warzones system. It allows players to mix and match the various game modes of Killzone: Shadowfall, and drop in and out of user-created zones.  Players can mix and match levels, modes, and options to their liking.  Right now, it seems heavily populated with Guerrilla Games creations, but players can customize their own zones if they want.  The problem right now is that there’s an element of discovery missing from the online interface, and a lot of the user-created zones are sparsely populated.

Level design is once again top notch from Guerrilla.  They are a marvel to look at, but exploring them you come to find that some are just massive in scope, which really shines a spotlight on an issue that seems to be plauging every zone I’ve entered in my time with multiplayer.  These lobbies are just not filling up, and it’s unclear why.  Perhaps its because on the whole, Killzone: Shadowfall is somewhat confusing when jumping into multiplayer for the first time.  It’s easy enough to enter a Warzone, but finding exactly what you want to play, and with whom you want to play it with, is a confusing task.

Assuming that you make it into a game with a decent player count, the action in Killzone: Shadowfall is great.  The class-based mechanics feel well balanced for a game that just launched.  While they’ve removed some classes and functions from Killzone 3, the three classes that they do offer each play very specific roles on the battlefield.  The recon class allows you to hide in the shadows and take out enemies from a distance.  The Assault class is for those looking to run headfirst into battle.  And the support class is there to pick them up when they fall down.  Without any customization to the specific Warzone, all of the available kits for these classes are available from the very beginning, and when used properly, can make for some of the best shooter action available today.

But Killzone: Shadowfall is more varied than any of the multiplayer experiences in the franchise, due to the customization of the Warzones.  With creators allowed to make just about anything they can dream up when it comes to modes, weapons, and kits allowed, there’s plenty of variety to go around.  But again, this is all potential fun.  It’s really not being harnessed and used by the Killzone community at this point.  There are some things that are just missing from Shadowfall that could improve the community aspect of the game immensely.  Clan functionality would be a big start, and Guerrilla claims that this will be coming in future updates.  Hopefully, they’ll also tinker with the chat functionality to get more people involved in a game that relies so much on teamwork.  Killzone: Shadowfall multiplayer has a lot of untapped potential, but for fans of the series, it’s right up there with Killzone 2, if just for how well it plays.

If Guerrilla Games was tasked with the simple objective of creating a showpiece game for the PlayStation 4, they’ve done so.  It offers a taste of what is possible on the new hardware from a graphical fidelity perspective.  If you needed a game to prove to you just how much horsepower is sitting in that new box, this will be one of the best launch titles to pick up.  At the same time, the single player campaign feels like it pulls in too many directions, from both the narrative and gameplay aspects.  Multiplayer has a lot of potential, but this potential could be wasted if players can’t figure out just how to get the most out of it.  With so many shooter offerings on the market today, if these things don’t arrive on day one as fully functional engaging experiences, players lose interest pretty quickly.