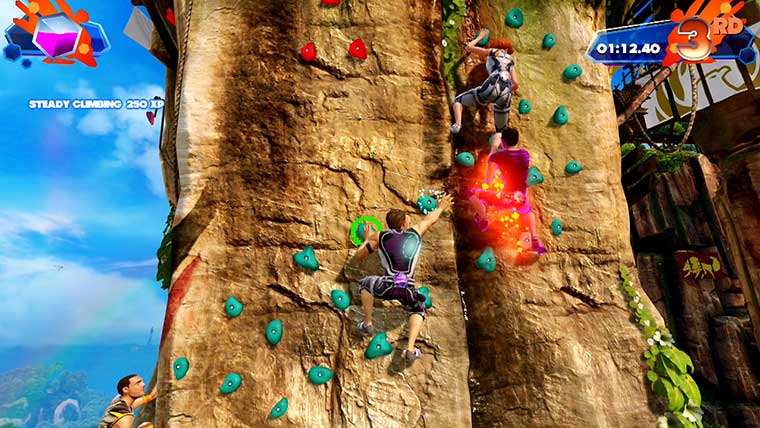 Microsoft’s Kinect 2.0 camera on the Xbox One will almost instantly reveal itself as a more powerful and capable motion controller than its predecessor in the opening moments of Kinect Sports Rivals. It’s bluntly clear that this iteration of the camera is more capable of recognizing your body in a multitude of situations, capable of recognizing smaller details and gestures. That said, it’s still not perfect. Like its voice recognition features, motion recognition with the Kinect is also hit and miss. When the illusion holds, Rivals feels amazing. When it doesn’t, it’s a frustrating experience.

Kinect Sports Rivals is a better, and more robust game than previous Kinect Sports titles. There’s plenty of content in this game, whether looking to play with friends or by yourself. Like most Kinect games, Rivals is best played as a local multiplayer game, if just for the hilarity and novelty of using your body as a controller. There’s plenty of fun to be had in competing with family and friends in the comfort of your living room. Kinect recognition in Rivals works well in both smaller and larger rooms across all game modes and activities. While smaller and more confined spaces were more prone to prompt you with error messages, it was entirely playable in a room the size of a bedroom, with multiple players. Though Kinect Sport Rivals shines brightest when you’re given the room to move freely.

Playing locally with friends and family, we found it easier to forgive the Kinect for its misreads and errors. Too busy having fun with the six sport offerings, the occasional mishap or recognition errors weren’t as glaring as they were when playing solo. And as is the case with many motion control games, Rivals has a learning curve associated with it. After a week with Rivals we found ourselves still learning different elements of each event, and getting better, more competitive matches as our skill and familiarity with the events grew.

Kinect Sports Rivals consists of six sports events: Soccer, Target Shooting, Wave Racing, Tennis, Bowling, and Rock Climbing. Differing from previous Kinect Sports titles, Rivals is a more complete package than its predecessors. Sure, there’s a quick play option that’ll allow you to dig into all of the game’s modes right away (following a tutorial), but there’s a full-fledged single player campaign with accompanying storyline and slew of unlockables, upgrades, and customizable aspects that tie into your character progression. As the story goes, you’ve arrived on the island of Kinect Sports Rivals as a new Challenger. The Kinect scans a virtual representation of you into the game world, which will be your default character in the game. Results are mixed on how accurate this scanning and representation are, but it worked pretty well in the few instances we tried. 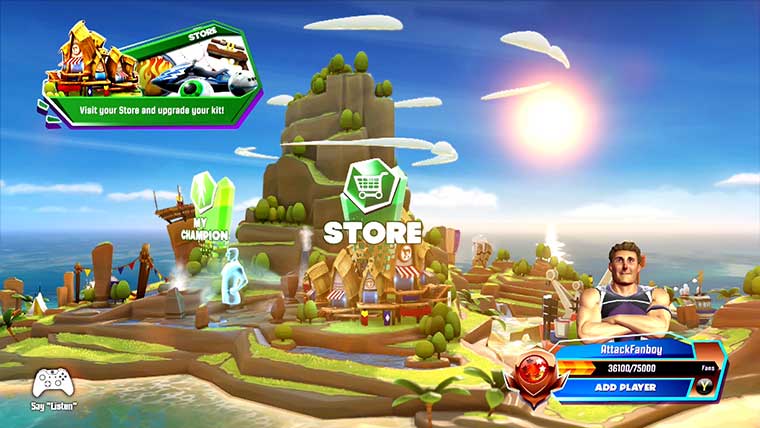 The sports offerings in Rivals are a mixed bag, and not all are returning favorites from the previous games. Notable omissions include the Volleyball and Ping Pong modes that worked quite well on the Xbox 360 version. For better or worse, these new modes have a lot more nuance to them. Since the Kinect can recognize you more clearly, there’s more subtlety to the actions you can perform in many of the modes. Wake Racing for example will track your entire body whether sitting or standing, including the closing of your fist to rev the accelerator. The more simple the game mode and its rules though, the better it usually feels with the Kinect. There’s less room for error in games like Bowling and Tennis, which both feel really natural as a result. Games with more complex rule sets like Soccer seem to throw the most occurrences of unexpected results from your actions. There’s a fine line for Rare to walk with the Kinect. Make it simple, but not too simple, as is the case with the Target Shooting mode, which is essentially pointing your finger at the screen to shoot targets.

Kinect Sports Rivals isn’t as cut and dry as previous Kinect Sports games. There’s a new layer applied to each sport, allowing players to earn and use powerups that can hinder your opponent or improve your own skills during a match. It adds a layer of strategy to the games, in maximizing how many times you can use your powerup in a given mode. In the case of Wake Racing, it essentially turns the mode into Mario Kart on jetskis, allowing you to use power-ups against your opponents to make it to the finish line first. Every mode has a number of different powerups to use. New Power-ups are unlocked as you earn XP in each sport. Power-ups and items will unlock automatically as you level-up, and can be purchased from the Kinect Sport Rivals Store. Characters can also be outfitted with customizable gear, which is purchased with currency that is earned alongside XP bonuses for each game you play. 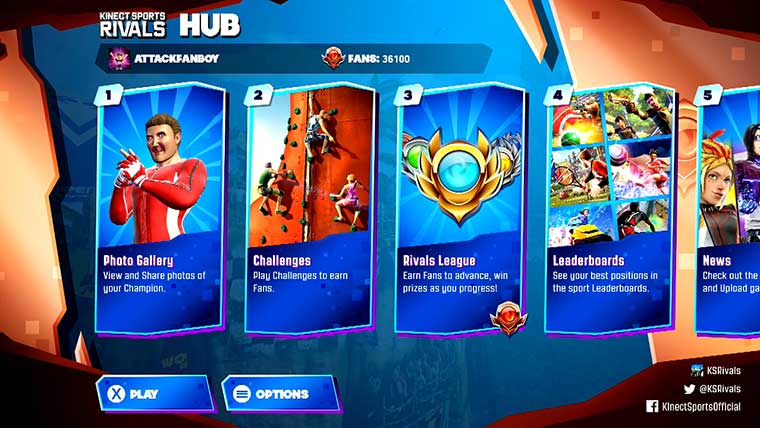 Online multiplayer has been stripped from Kinect Sports Rivals. In its place are a series of online challenges that can be performed against ghosts of friends. It in no way substitutes for actual online competition, and those who enjoyed the online offerings of the previous Kinect Sports games will likely miss the ability to play with friends across Xbox Live. The Kinect Sports Rivals Hub does offer many challenges to perform against friends, but it’s just no subsitute for actually playing against someone else.

It’s hard to imagine that a solo player of Kinect Sports Rivals will get as much enjoyment out of the game as someone who will be setting this up in a large room for local multiplayer. For that person, Kinect Sports is going to be a tough sale. While the single player, story mode, and challenges contain more than enough content to keep you occupied, the real fun is in being able to experience this game with others, where Kinect Sports Rivals shines.