The latest news in the world of video games at Attack of the Fanboy
September 5th, 2017 by William Schwartz 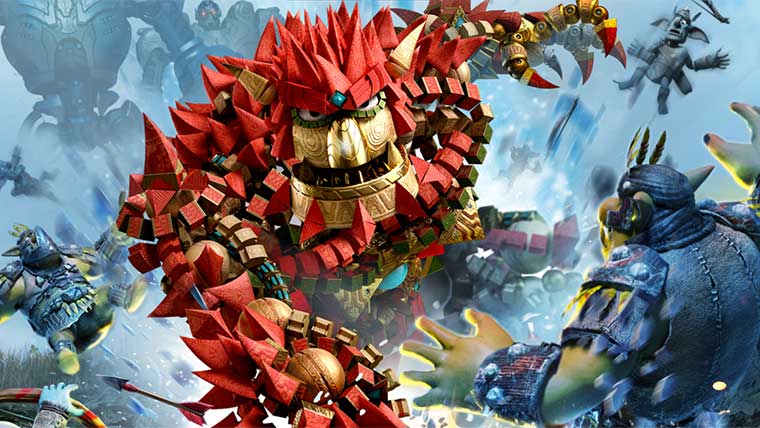 Knack was one of the PlayStation 4’s flagship first party exclusives for the console when it originally launched in 2013.  While this is a game that did have its fair share of fans, reviews for it were less than stellar with reviewers pointing out many flaws across the board on this platformer/beat-em-up.  With four years behind them and plenty of time to take that criticism to heart, Knack 2 arrives for the PlayStation 4.  From Mark Cerny and Sony’s Japan Studio this is a sequel that not many asked for, but it’s one where the developers seemingly went down the list of things people knocked Knack for and attempted to remedy them.

While you saved the world in the original game, you’re back at it again in Knack 2 fighting a Goblin Army that has managed to uncover a way to wake slumbering robots.  There are some familiar faces, such as Gundahar, Dr. Vargas, Lucas, Katrina, and Ryder.   There’s new cast as well in the monks that are waging an ongoing war with the Goblin army.  While we generally try to stay out of spoiler territory, Knack 2’s story is better than the first, not quite as straight forward.  Marianne Krawczyk (God of War) can probably be held accountable for that.  Knack 2 is still very much a family friendly game and its story is suitable for children, entertaining enough to hold adult interest.  That said the story for Knack is not treading into uncharted waters.  We learn a little bit more about some of the key characters from the first game, but there are familiar story tropes across this 10-hour adventure. 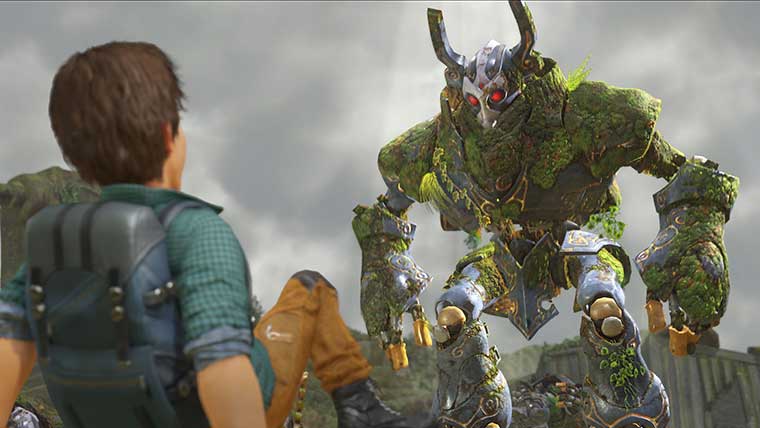 The core of Knack 2 is very familiar to the original, levels are comprised of combat, platforming, and puzzle solving. However, the game is much deeper for both the platforming fan and the beat-em up fighting game fan.   On both fronts, Knack 2 is a better effort than its predecessor.  The improved combat is the better of the two systems.  The moveset for Knack in solo play has increased significantly.  There are numerous unlockable attacks that you’ll learn across the course of the game.  Compared to the original there’s just much more here to start out with, and by the end of the game Knack 2’s combat can be quite complex and challenging, especially on the higher skill levels.  Along the way you’ll be earning unlocks which lead to more powerful attacks, defense, and other special abilities that add to the arsenal.  While Knack 2 is a large improvement over the original, it doesn’t quite have the depth or rhythm found in the best of the beat-em-up genre.

Knack 2 doesn’t quite have the depth or rhythm found in the best of the genre.

The unique feature of this series is that the main character, Knack, is made up of relics.   You’ll start as a 2ft tall mascot-like creature, and can balloon into 30ft monstrocity if you find enough relics in a level.  These are usually placed carefully by the developers.  Like the first game, this a guided linear experience.  The camera is out of the player’s hands, and you’ll almost always be the size that the developers need you to be for any given challenges that a level may pose.  This is still one of the best parts of Knack 2, although it has been expanded upon.  Being big Knack and stomping your way through a level is still a great payoff, even if it doesn’t happen as much as you’d like.   You do have the ability to transform into your smallest form at any given moment in Knack 2.  These transformations may be needed to progress through a level, or to find secret caches of objects or energy.  There are a lot of secrets to uncover in the levels of Knack 2.  It can get a little tedious in looking for all of them, but you’ll stumble across a fair amount by just playing the game. 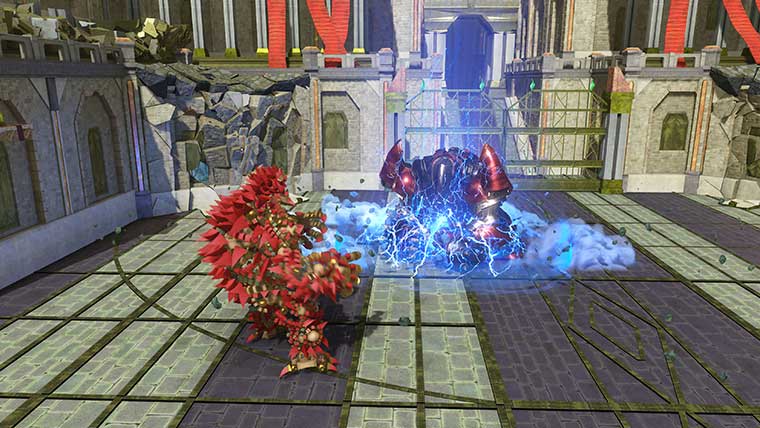 This back and forth of changing sizes leads to some unique puzzles that are introduced throughout the game.  Alongside the shapeshifting, there’s some elemental relics that can give Knack powers that usually need to be equipped to pass certain points in levels.  Japan Studios doesn’t keep going back to the puzzle well in the 15-chapter story.  For the most part, it feels like they introduce something new in each level to keep it feeling fresh in Knack 2.

The last part of Knack and probably the weakest aspect is in the platforming.  While the level designs are incredibly detailed, the platforming can be hit and miss on the control side of things.  Since the player has no control over the camera, it can lead to some frustrating spots where you simply can’t tell exactly where you are landing.  The upshot for this is that the checkpointing is good in Knack 2.  On Normal difficulty, I can’t recall a spot where platforming deaths started me at point where I said “Not this again.”   Regardless, the combination of all three gameplay systems is a game that is ultimately more fun and rewarding for the player when compared to the original Knack. 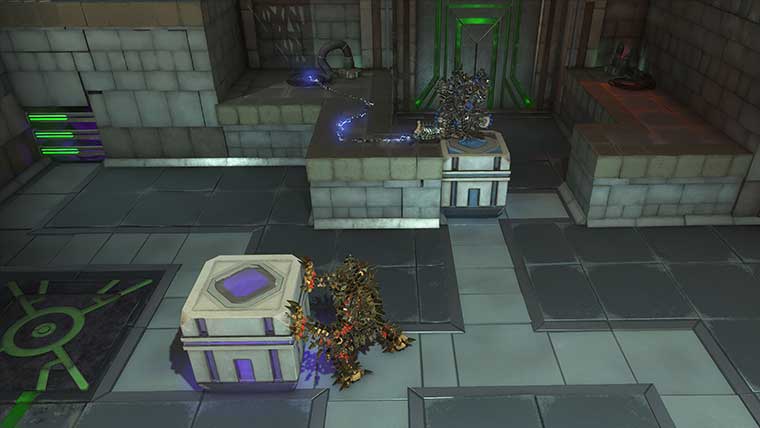 What Knack 2 doesn’t have going for it this time around is the visual surprise.  A launch game for the PlayStation 4, Knack was many new console owners first game on the new system.  The particle system that comprises Knack still looks great in 2017… just not nearly as impressive as it was four years ago.  The world of Knack 2 is colorful, like playing in a Pixar movie.  The game will transition into full blown sequences that rival motion picture quality in terms of the art style.  Knack 2 has a whimsical charm in both its story and presentation that is appropriate for the entire family.

Knack 2 has a whimsical quality appropriate for the entire family

Japan Studios has also made the decision to include couch co-op with Knack 2.  This allows two characters to fight through the game together, using special combination attacks to change the gameplay dynamic.  There are numerous modes to tackle in terms of difficulty.  There’s something for everyone here, from the easiest mode bypassing some of the harder aspects of the game to harder difficulties that’ll present more challenge for a core audience.  Upon completion you can head back into Knack 2 to try these different difficulty modes in a New Game +.  Here you’ll be able to carry over all the skills and abilities you’ve purchased in your previous playthrough, uncover secrets you might have missed, and probably fill out that skill tree.  Our single playthrough had plenty left to unlock and uncover upon starting it all again.

With the gamplay improvements, the additional modes that are included in Knack 2 are worthwhile.  A time attack mode has you testing both combat and platforming, grading you on how quickly you can progress through a level.  On the other hand there is a combat arena challenge, which tasks you with scoring the most points by besting enemies within a time limit.  While these modes certainly won’t be for everyone, it’s another in the list of things to do in Knack 2 once you’ve seen the story through and uncovered all of the game’s secrets and power-ups as these things can all be taken into the modes to help achieve higher scores.

It’s a good thing that Sony didn’t close the book on Knack after their freshman effort for the series was panned. I don’t think anyone will be calling it GOTY like we saw with the jump from Uncharted to Uncharted 2.  In a year full of big exclusive games that can only be played on the PlayStation 4, Knack is yet another compelling reason to own the console.

Knack 2 is a sequel done right.  While the original game was more of a showcase of what the PS4 was capable of, Knack 2 is a more thoughtful, well-rounded experience.