The Last Tinker: City of Colors is a game that is full of contradictions. It is both colorful and beautiful, as well as cold and lifeless. At times it can be fun and bright, and at others dark and boring. It is a platforming game, yet there is no jump button. It is a unique game, yet it feels all too familiar. The biggest contradiction of The Last Tinker though is that it seems to be targeting two audiences at once, namely children and adults, and the game suffers greatly due to the lack of focus. With all of the contradictions in The Last Tinker the only question left is, does it all add up to a fun experience?

The Last Tinker draws a lot of inspiration from 3D platform games of the past, such as Jak & Daxter

The Last Tinker stars Koru, an anthropomorphic monkey who sets out on an adventure in Colortown. Colortown is made up of different areas, all based on a single color. The areas of Red, Blue, and Green used to get along, but now have shut their borders and are fighting amongst each other. Koru thinks he is about to set things right, but ends up unleashing “the bleakness” upon the land. On his adventure to fight the bleakness Koru will try to unite the three colors together against their common foe so they can fight back against the bleakness and bring color back to Colortown.

The Last Tinker draws a lot of inspiration from 3D platform games of the past, such as Jak & Daxter. The developers at Mimimi Productions certainly created a colorful world full of vibrant characters which rivals those contained in the classics. However, there is an odd feeling of lifelessness that permeates the game and its world. You can see in the screenshots here that the world is certainly vivid, but it never comes to life as those other game’s did. While researching the game I found it difficult to discern where other players were in the story because, despite the dynamic appearance of the world, in the end everything looks the same. 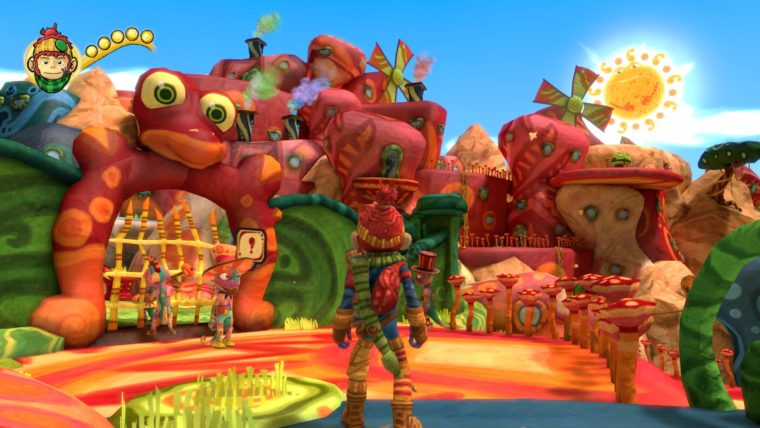 This lifelessness is only enhanced by the game’s subdued sound design. The actual soundtrack is an eclectic mix of enjoyable tunes, but everything else feels so quiet and refrained, causing the game to feel strangely muted. Add on some worrying graphical issues, the most jarring of which is the constantly fluctuating framerate, and you end up with a game that fails to impress both audibly and visually.

The gameplay of The Last Tinker doesn’t hold up much better unfortunately. The decision to make a 3D platforming game without giving players the ability to jump is certainly odd. It makes it so the game feels overly simplified, with the gameplay boiling down to running at the right ledges and fighting enemies. Those fights are mostly held back by the aforementioned framerate issues, and the overall slow feeling the fighting has. While initiating attacks is fast, subsequent hits feel slow and plodding as if you were stuck in mud. The targeting system is fidgety too, causing you to attack nearby boxes and barrels sometimes on accident.

The combat system is another area where The Last Tinker simplifies things, with most fights simply consisting of mashing the square button over and over until everything is dead. Dodges, and other special moves come into play later but far too late for the game to feel challenging to anyone but younger children. This prompted me to ask the most important question for The Last Tinker, who is it meant to be played by? There is a “Kids Only” difficulty mode, but there is also an “Instant Death” mode. I would say that The Last Tinker is meant to be fun for all ages, but I think that was where they were aiming and ended up creating something that was too slow and boring for children, and too simple and easy for adults. Even with the more adult friendly “Instant Death” mode, you are simply amplifying frustration rather than making the game more challenging. 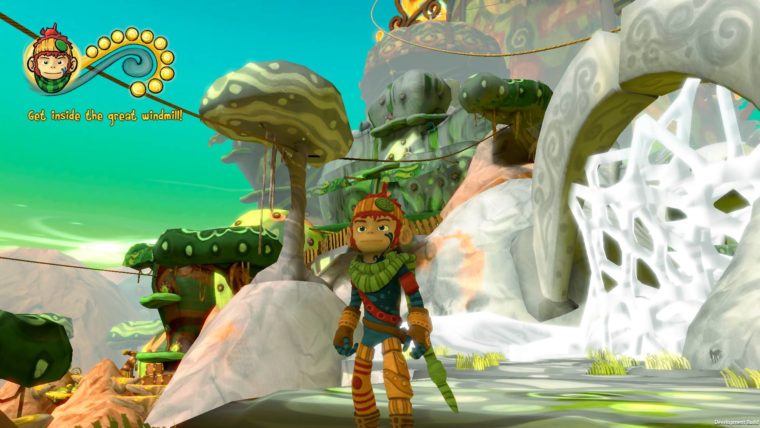 The Last Tinker isn’t a bad game necessarily, it is just an exceedingly average one in everything but it’s soundtrack and art design. If you just want to run around and explore a colorful world for a few hours then The Last Tinker will do the job. However, if you are looking for any deeper enjoyment beyond that you will be out of luck.

The Last Tinker: City of Colors