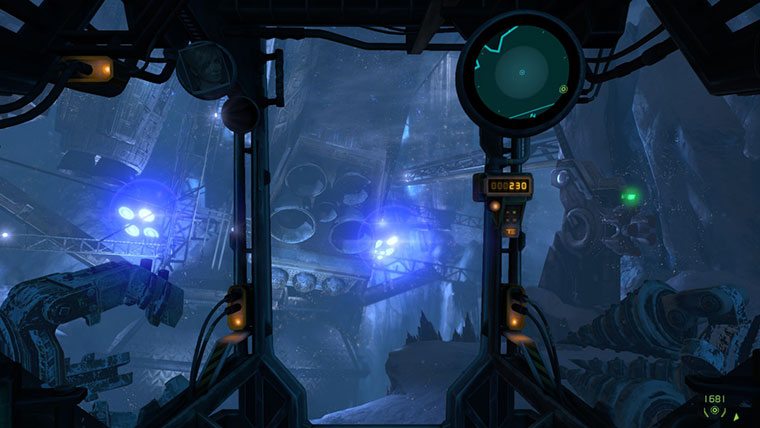 The Lost Planet series is one of the more popular that Capcom introduced this generation, and it’s one that has been evolving over the course of three games. While the first game impressed, the second of the franchise seemed to lose ground and evolve into something else. Lost Planet 3 continues this evolution, as the series transforms from pure unadultered third person shooting, into a story-driven game that tries a little too hard to differentiate itself from the pack. With Spark Unlimited at the helm for this third installment, there’s very little by way of similarities in this game to the previous two. That is, other than the whole shooting at giant monsters and making sure to hit their bright orange spots.

A return to the icy setting of the original holds a lot of promise, it’s certainly a setting that we’ve seen recently when trying to set the stage for an emotional and spooky vibe. We saw Dead Space 3 arrive earlier this year with a near identical locale, and if you’ve played that game, you’re going to find a lot of similarities between it and Lost Planet 3. Jim Peyton is a space cowboy, a gun for hire, and a man that’s willing to go to just about any lengths to keep his wife and newborn clothed, feed, and housed. It’s the reason he’s out on EDN III, working for the Neo-Venus Construction Company, mining the planet for rare minerals and the rare energy source of the Akrid.

Spark does a great job in using the environment and the story of Peyton’s separation from his family to create a nice tone for the game, and certainly sets itself apart from previous games in this regard. Unfortunately, just as Peyton is on EDN III to work, you as a player have to persevere through all the tedium that you would if working yourself. The game never quite gets to the point of a rewarding payoff for all the downtime and mundane tasks you have to perform. It’s very much a linear game, despite giving you the options to tackle different objectives and side quests. Follow the marker, hit the button, kill the enemies, return to base. It’s a formula that’s reused over and over until the end of the game. It would have been considerably worse if Spark hadn’t added in a couple of different gameplay mechanics into the mix. The giant rig that is used to traverse the deadly lands is a cool but boring implementation, and the game moves from third person run-n-gun to a third person cover shooter as new enemies are introduced. That’s not to say that there aren’t some interesting things introduced with Lost Planet 3. There are cool uses in the both the rig and on foot, where Peyton must use a combination of quick time events and aiming to take down enemies, but after a few goes it all becomes pretty commonplace.

If you loved previous Lost Planet games for their combat, you’ll likely enjoy this game. There’s no shortage of shooting segments, and Spark doesn’t deviate from the traditional formula all that much. Giant Akrid with glowing spots on them are the target. Shooting off armor plates, tracking down ammo caches, and dodging their attacks are the primary gameplay devices in the combat sequences. The problem isn’t with the combat. I mean, eventhough it doesn’t change all that much, enemies attack patterns do differ as the game progresses. And Spark does throw you into some cool scenarios that’ll keep you on your toes. The real issue is all the down time in between missions, and the go here, press that gameplay in-between the fighting. There’s just seems to be an overabundance of meaningless slow trudges through the lifeless homebase, or the lengthy corridors that must be traveled down in your slow moving mech vehicle. You could say that it adds some authenticity to the actual story they are trying to get across, but if that’s the case, it’s a boring one.

Lost Planet 3 wouldn’t be a Lost Planet game without some sort of multiplayer, and this has also seen some changes from the first two games. Lost Planet 3 multiplayer feels like a generic cover shooter in its standard modes. Sure, there’s a new progression system and a couple of different game modes, but it feels eerily similar to the many other shooters that have tried to mimic Epic’s Gears of War series, right down to its lumbering pace. There is some variety to be found in multiplayer. If you like cover shooters, Lost Planet 3 isn’t bad so much as it’s just similar to other that have come before it. There’s a Team Deathmatch Mode. There’s an Extraction Mode which tasks players with harvesting energy to win the match, and Scenario mode which puts opposing teams on a series of objectives.

As noted, there is progression system in the game, and it does unlock some perks that do change the game significantly from the gameplay found in Gears of War. But most games do boil down to cover shooting in the third person, complete with stomping on downed enemies, and fighting your way to down-but-not-out teammates. This competitive multiplayer aspect of Lost Planet 3 is much like the single player storyline, far from bad, sometimes fun, but overall forgettable and likely shortlived. There is a 3 v 3 competitive cooperative mode that is somewhat intriguing. The mode puts players in defense against the Akrid, holding out and scoring points against a competing team. Teams look to survive then overtake control points to rackup points and the victory. It’s actually the freshest thing about Lost Planet 3, as I don’t think I’ve played anything exactly like it. The competitive and cooperative nature is actually more fun than the traditional five on five mode, and definitely feels like it has longer legs.

At the end of the day, Lost Planet 3 doesn’t have the story payoff to justify the laborious gameplay in the single player. While it’s not a bad story, and it touches on some interesting topics, it’s not one that’ll make you soon forget about just how repetitive the gameplay actually is underneath it all. With not much waiting for you after this story has concluded by way of multiplayer, there just doesn’t seem like much value here. You aren’t missing much if you played the original two games, and skip this one. Other than some flashes of previous Lost Planet games for brief moments, this feels very little like its predecessors.