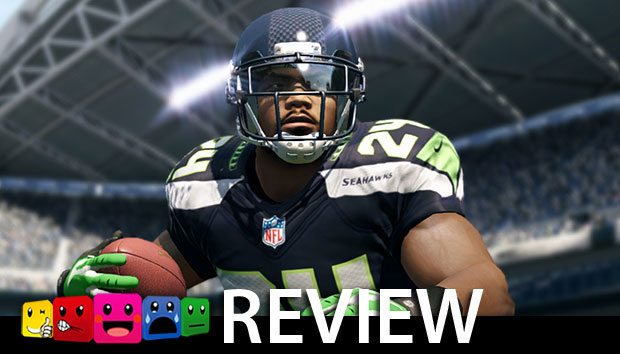 There are good years and there are bad years when it comes to EA’s Madden NFL Football franchise, but rest assured, every year is gonna bring about a new Madden title. The core concept has been expanded upon and iterated for some twenty odd years, with better graphics, new gameplay modes, and added realism among other things. When football season finally rolls around each summer, we start to hear buzz marketing words on our favorite video game websites, magazines, and other media outlets like commercials and television shows. This year, that buzz word was the Infinity Engine; Madden NFL 13’s big new change that is set to revolutionize the way that we play with the virtual pigskin. Is an engine enough to get football fans excited about this year’s game, and is Madden NFL 13 more than just a yearly re-skinning of previous efforts?

As it turns out, this is one of those “good years” when it comes to Madden NFL football, and not just because of the new Infinity Physics Engine. EA has certainly laid the groundwork for a more authentic football experience with the better physics found in their new digs, but has also tightened up the game in a number of different areas that make Madden NFL 13 one of the best Madden titles to date. On the field, there are a many changes that football fans will welcome, and alot of it starts with the building blocks of the new engine.

The Infinity Engine allows players interact with each other in more realistic manners than they previously had before. Running calculations in the background that throw virtual dice to determine the outcome of any given play, the possibilities seem endless when playing Madden NFL 13, and it looks like the days of limited animation and scripted content in football games are behind us. What we have now is a game that feels more organic, with more moving pieces on any given play. With 22 men on the field, it’s truly mind boggling to see all of the unpredictable action unfolding on each down. Being that this is first iteration of the new engine, it doesn’t arrive without its problems. While there are some “did that just happen” moments in Madden NFL 13 that are rivaled only by real life action, the new engine is also at fault for a number of mishaps to be found in in the game that break the illusion, if only slightly. Being that all of the players interact with each other in new ways, you’ll find them tripping over one another and falling down quite often in-between plays. During the play, collisions can be a crap shoot of utterly awesome or awesomely comical and there’s definitely a sense that the new engine is just cutting its teeth at this point. One thing’s for sure though, it brings about the necessary iteration that a yearly franchise needs to stay relevant with its fans, and we’ll likely be hearing more about this new technology over the next decade or so. Even more exciting is the promise of next gen consoles, with more power that will allow for EA to make even more on-field calculations with this powerful new technology for the franchise.

The additional realism isn’t limited to the collisions of the Infinity Engine though. Passing has been refined in Madden ’13. Total Control Passing allows players to use the left analog stick to place passes away from from defenders and lead their receivers, and is combined with new passing trajectory controls that add over 25 new trajectory zones for different types of routes. Couple these new quarterbacking options with the receiver awareness meter that is constantly monitoring whether your target is ready for a ball thrown his way, and the new passing game in Madden 13 is smoother than ever, and more true to life as well. For long time Madden fans, you’ve known the perils of play-action, and how a blitzing defenses can blow up this type of play very easily, to the point of making the strategy nonviable. This year you can break out of play-action scripting on-the-fly, giving you the power to avoid these blitzing defenders and avoiding a drive-stopping loss of yards. On the other side of the ball, defenders have also been painted with the brush of realism. In previous Madden titles, players could blindly swat passes and make seemingly impossible plays on the ball. This is no more. Defensive backs now act more realistically on the field, and only respond to balls they can see.

Despite the glory that has been bestowed on the Infinity Engine pre-launch for Madden NFL 13, the real star of the show, in our eyes, is the new Connected Careers mode. This new mode aborts previous gameplay modes in the Madden franchise and merges them into one all-encompassing franchise simulator. Players can play in the new Connected Careers mode in either online or offline leagues and select from a variety of career options, which is basically broken down into two groups: Coach and Player careers.

As a Coach, you’ll control every aspect of your football team for as many seasons as you can handle in a year. You control the day to day operations like cutting players, scouting for new talent, making trades and acquisitions, negotiating player contracts and a ton of other tasks that need to be performed to keep your team playing at the highest level. You’ll play practice, pre-season, regular season, and playoff games to build towards your team XP and Legacy Score. Team XP is used to upgrade players within your franchise, and can be allocated on a number of different attributes ranging from inexpensive upgrades, to costly features that can make good players great. It’s one of the deepest franchise modes that a Madden game has ever seen, from the coaches perspective. Like the Superstar modes of Madden’s past, Connected Careers also allows you to create a player, select an exisiting one, or assume the role of an NFL Legend, and play out your franchise in the shoes of a single man. Instead of focusing on the day to day operations of the football team, you’ll be more goal oriented towards your player, and will be tasked with completing in-game objectives specific to your player in effort to earn XP to upgrade your vital statistics. If you select an offensive player, you’ll only need to play downs where you are in the game, and the same goes for defenders as well.

These XP bonuses are the heart and soul of Connected Careers, and are broken down into Weekly, Season, and Milestone categories that vary in difficulty and reward. Meeting your goals will net you the necessary XP to improve your player, and carry on to chip away at milestone events. Fail to hit these milestones, and players can be cut, coaches fired. As a coach, its up to you to disperse these points as you see necessary to improve your team and give it the best chance of winning. As a player, you’ll want to improve on the facets of your game that need the most work. The ultimate end-game for Connected Careers is to get your player or coach into Canton. The legacy scoring system that tracks your progress through your career can be measured against friends, current NFL players, or even legendary players who’ve already made it there.

While Connected Careers is certainly the biggest new game mode to hit Madden NFL 13, its certainly not the only one to see. There are many returning game modes in Madden NFL 13. The Madden Ultimate Team is back, and allows you to stack your best lineup against computer controlled or online opponents. The biggest difference here is that the Ultimate Team mode has been integrated with the main game in a few interesting ways. Certain cards found in the Ultimate Team mode can be used to unlock players or coaches in the Connected Careers mode, giving you another reason to grind away for those Legendary card packs. Standard online modes are also obviously still available for a quick pick up and play experience, as well as team-up game modes that were recently introduced.

Another surprisingly well-implemented feature in Madden NFL 13 for the Xbox 360 is the Kinect functionality. If other “core” franchises are anything to go by, the Kinect has found its groove with speech recognition and voice command in games. In Madden ’13 the Kinect is a perfect accomplice for the Xbox 360 controller. Pre-snap adjustments can be called on Offense and Defense. You can hurry your team to line, call hot-routes by using reciever names, flip play direction, or just call an audible. Like the Xbox Dashboard, if you can see it, you can say it and the Kinect will respond. It even mutes your microphone in online games during the pre-play when changes are being made. The only problems that we saw with the Kinect commands is that it would rarely get it wrong. Calling a timeout, or doing something that you didn’t intend to can be a heartbraker in the cruel cruel world of online gameplay.

Each year with the Madden NFL franchise, it boils down to whether or not the changes to the game have been worthwhile moves forward for the franchise and warrant your cash. This year, it’s clearer than anytime in recent memory that there was a hard push by EA to remedy any franchise fatigue that might be looming in the Madden community. New ways to play with your friends in the online arena, with deeper and more engaging content in the Connected Careers mode is sure to keep football fans busy this year. The Infinity Engine, while not yet perfected, is definitely a glimpse at what’s to come from EA and just how close to the genuine article sports games are getting.