No downtime on this golf course. 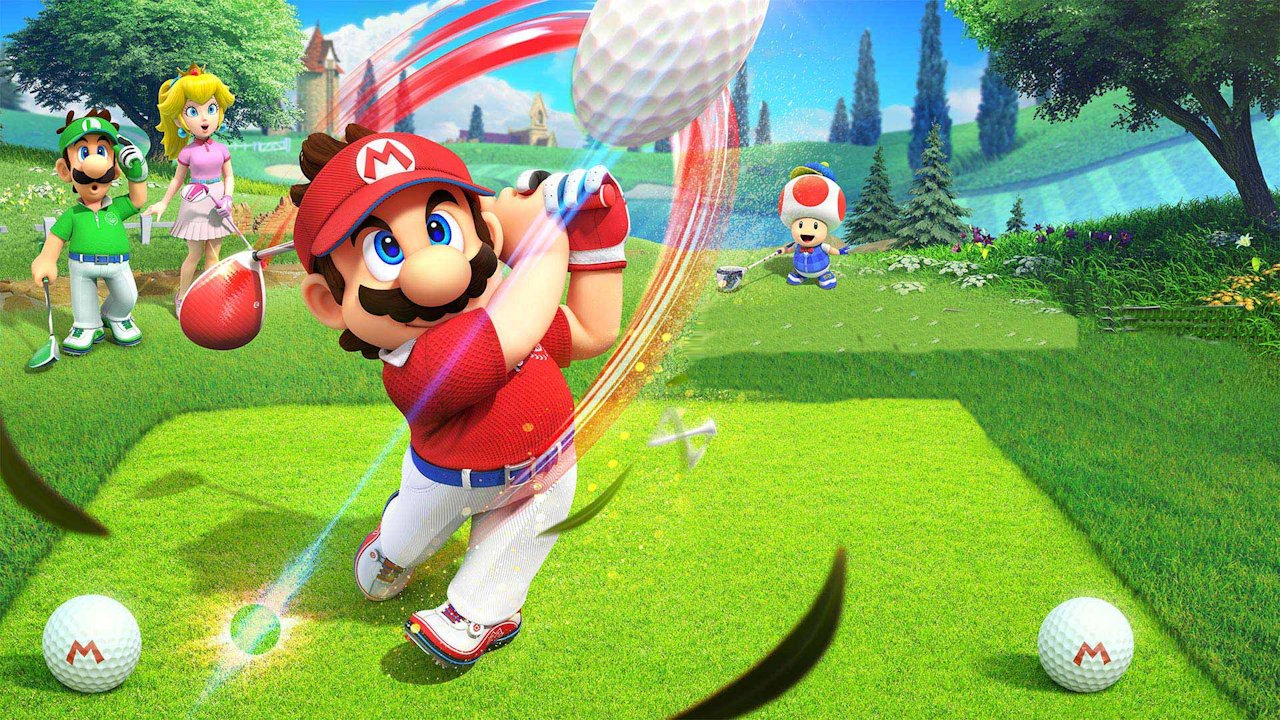 Mario has long been not just one of the most recognizable video game characters, but one of the most recognizable characters in the world overall. While the mainline games like Super Mario Odyssey feature platforming perfection, Mario and his friends and even enemies have also been in numerous spinoff titles over the years too. Camelot Software has been the developer behind a number of these, most notably the golf and tennis offerings, and now they are back again with another one known as Mario Golf: Super Rush.

There have been countless golf related video games over the years, with varying control schemes and mechanics across them. The Mario Golf franchise in particular has always been arcade-like in style, especially with some of its more fantastical mechanics introduced over the years. This is a common trait of the Mario sports games and Mario Golf: Super Rush is no different. The game features a roster of 16 Mario characters from over the years, including staples like Wario and Yoshi, as well as some newcomers like Pauline and King Bob-omb. You can also choose to use a Mii as a seventeenth character in certain game modes as well, with them also being the star of the game’s single player campaign. 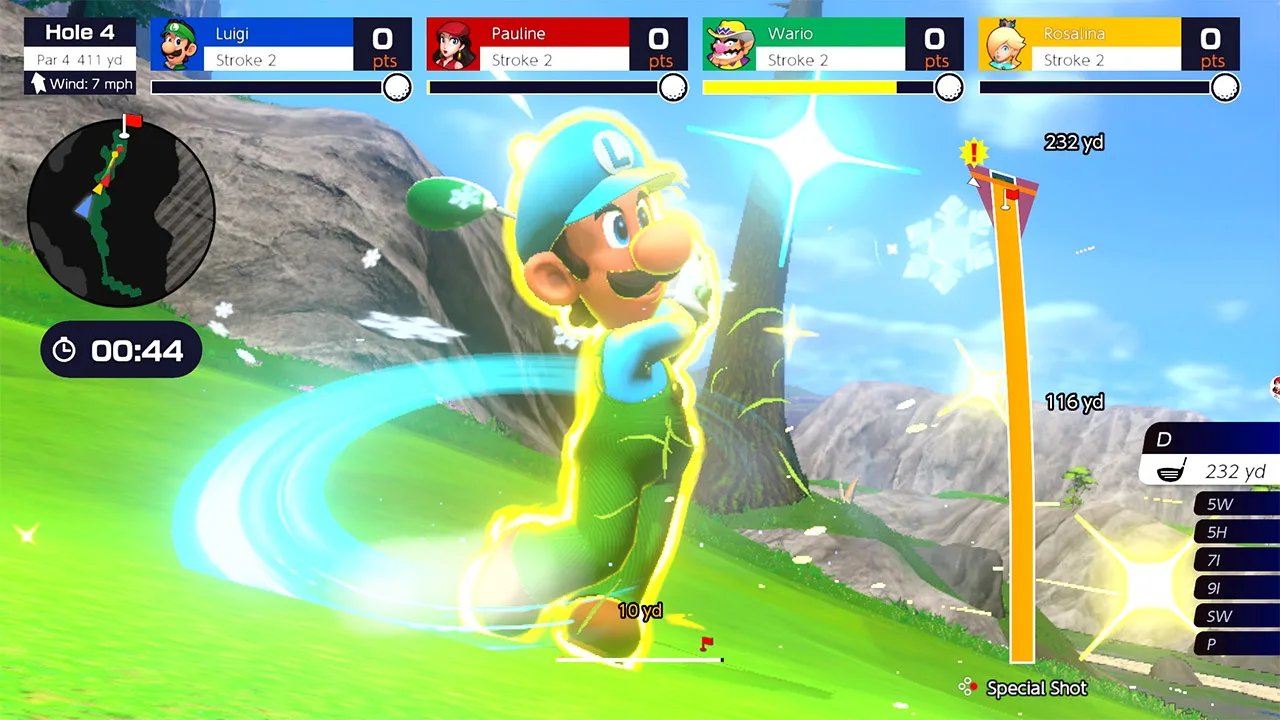 The basic gameplay here is pretty simple to learn, as they want an accessible experience for players right from the start. There’s the usual choice of different clubs to use, aiming the shot, choosing how much power to use with the power meter and such, and even things like adding topspin or backspin to the shot. Wind can play a major factor on drives when teeing off as well as when putting, where elevation also really comes into play. Curve shots and super-curve shots also can be really important to get around obstacles, especially when you get to the Golf Adventure mode. These are the types of mechanics that you would expect in pretty much every golf game, but Mario Golf: Super Rush has much more to it for you to learn as well like the Special Shot that charges up on a meter and can really help you out over time.

Mario Golf: Super Rush has three main game modes to choose from, Play Golf, Solo Challenge, and Golf Adventure. Play Golf is your go-to option if you just want to jump right into some Mario Golf action, but there are a few options to choose from within it. Standard Golf is your typical golf experience, where you can choose a number of different settings, including up to four players and even what play style you want between button and motion controls. Solo Challenge is the same thing as well, but just with one player and doing either score attack or time attack across 18 holes.

Golf is by far the most easy sport to adapt to motion controls simply because the swinging of a golf club can be easily emulated. The motion controls in Mario Golf: Super Rush handle this very well, offering a legitimate option for players that want to be more active and pretend they are actually on the green with Mario and company. For those more traditional gamers that may want a little more preciseness in playing though, there are the default button controls that also work very well and are probably the option most players will go with long term. 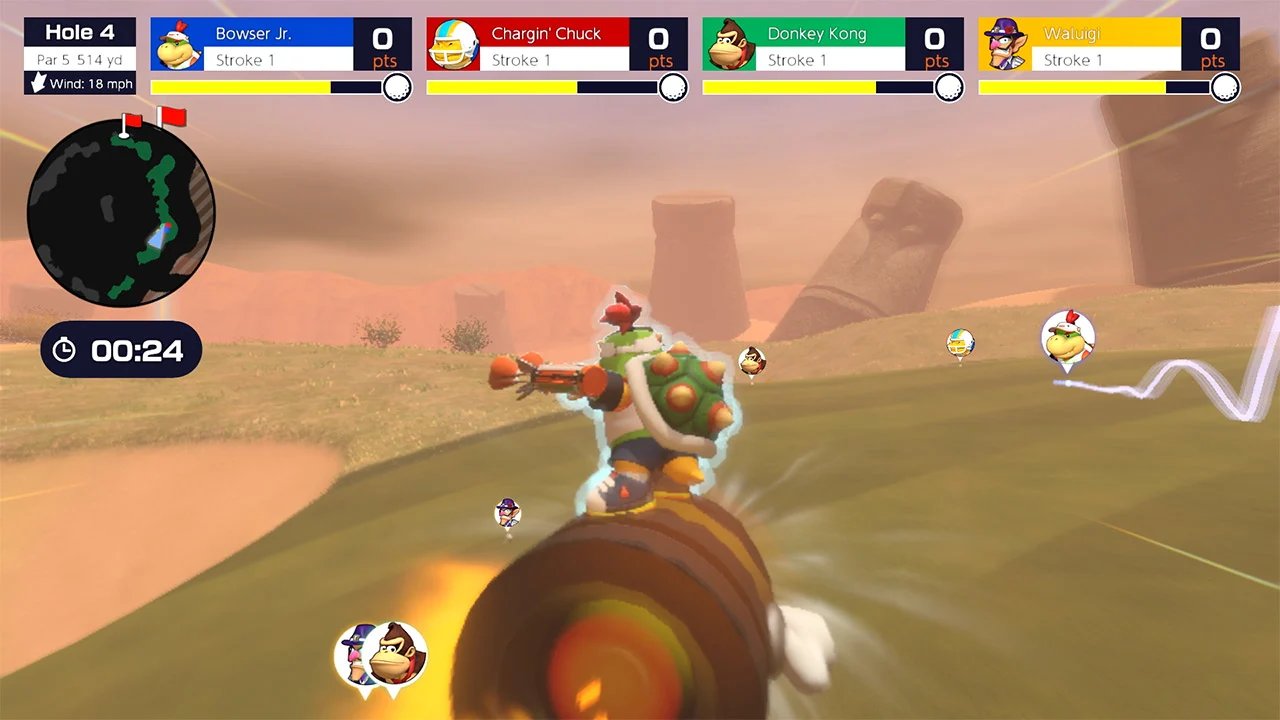 The Standard Golf option is far from all Mario Golf: Super Rush has to offer players though, as there are two brand new styles of golf in this game known as Speed Golf and Battle Golf. These are where the Super Rush part of the title comes into play, as the game no longer is just about hitting the ball. Speed Golf at its core is the same at standard golf in where you need to hit the ball until you get it into each hole. However, the major change here is that you now have to run after and chase down your ball after each hit. There are two versions of this available, one where players are rewarded points for finish order on each hole based on overall time or one where the goal is just to have the best time at the end period.

Running after the ball can be done in a few different ways. There is the regular walking speed that you want to avoid, since you can hold down B and run a bit faster. Then there is the Super Dash that you can use by pressing L to dart ahead quickly and even knock down other players in the way. The downside of running and the Super Dash though is that they use up your stamina meter, especially with the latter technique. There are also Heart items scattered across the courses though that you can pick up to replenish some of your stamina meter, but your other opponents are likely trying to do the same. This is why you have to be strategic with how you make the mad rush to your ball each and every time.

Playing Speed Golf can get rather crazy at times, but nothing gets as wild as the new Battle Golf mode. This takes the idea of Speed Golf and mixes it with a battle royale setting almost. Rather than a large course split into up to 18 holes, Battle Golf takes place in one arena that houses nine total holes all relatively close to one another. The goal here is to be the first to sink your ball in three holes and obtain flags as a result, all while avoiding a barrage of different obstacles to make this difficult. There are also Rush Events that happen each minute, such as adding ice or Bob-ombs around the hole. The last few flags in Battle Golf get absolutely insane sometimes, which adds a level of intensity. This really was a great addition for people wanting a short pick up and play experience in the game, but it definitely won’t be for everyone. 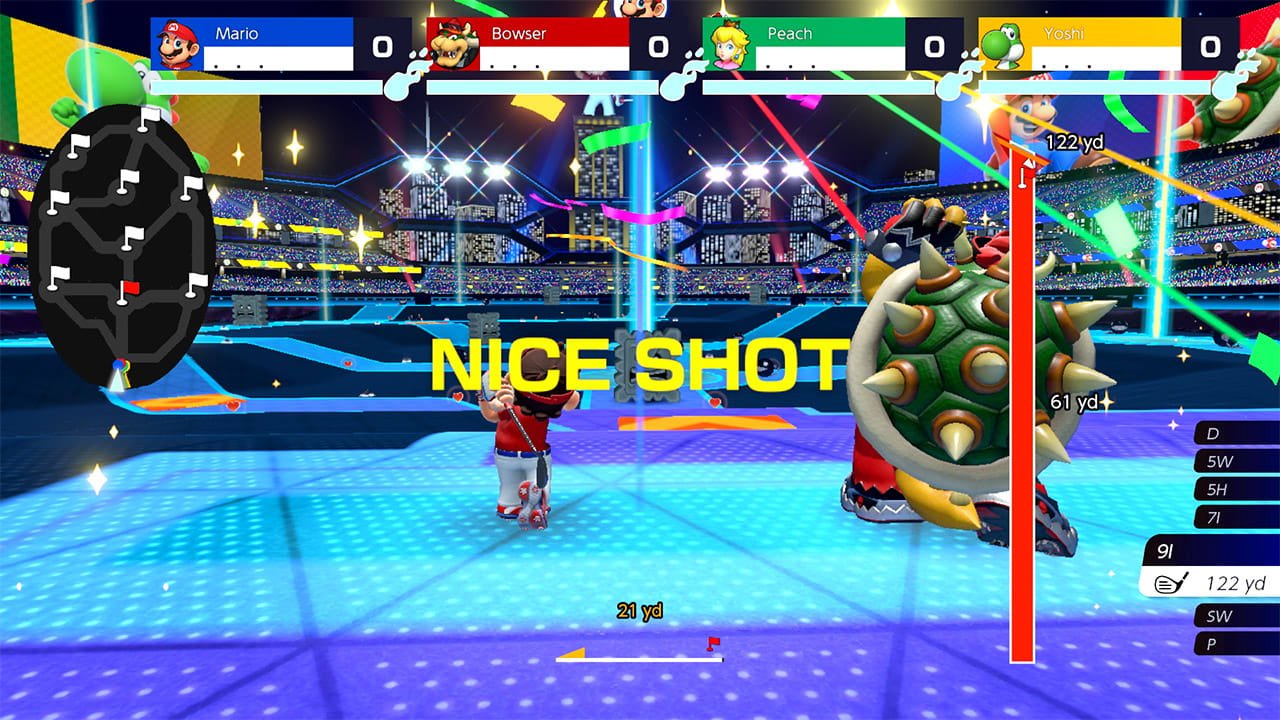 Mario Golf: Super Rush also offers players online multiplayer, which is something that you would come to expect in any modern golf game. The one offered here is incredibly basic though, just letting you play each of the three aforementioned gameplay types online. This can be done by either creating a room or finding existing rooms, allowing you to play with either friends or random people around the world. The disappointing part though is that some sort of tournament option both offline and especially online would have been nice to have seen be included, but hopefully that is something that could come later as part of the promised updates for the game post-launch.

One of the best aspects of most of the Camelot developed Mario sports titles have been the single player modes. They have almost always made a point to offer story driven campaigns beyond the normal modes where you just play the respective sport. That trend has continued with Mario Golf: Super Rush as well with the new mode known as Golf Adventure.

Golf Adventure puts you in control of your own Mii character who is a rookie alongside a group of other characters including Toadette, Boo, and Charging Chuck. These characters are your rivals during this mode, often showing up in competitions against you. The journey starts in the same household found within Bonny Greens, where you are introduced to the mechanics of the game along with some challenges. 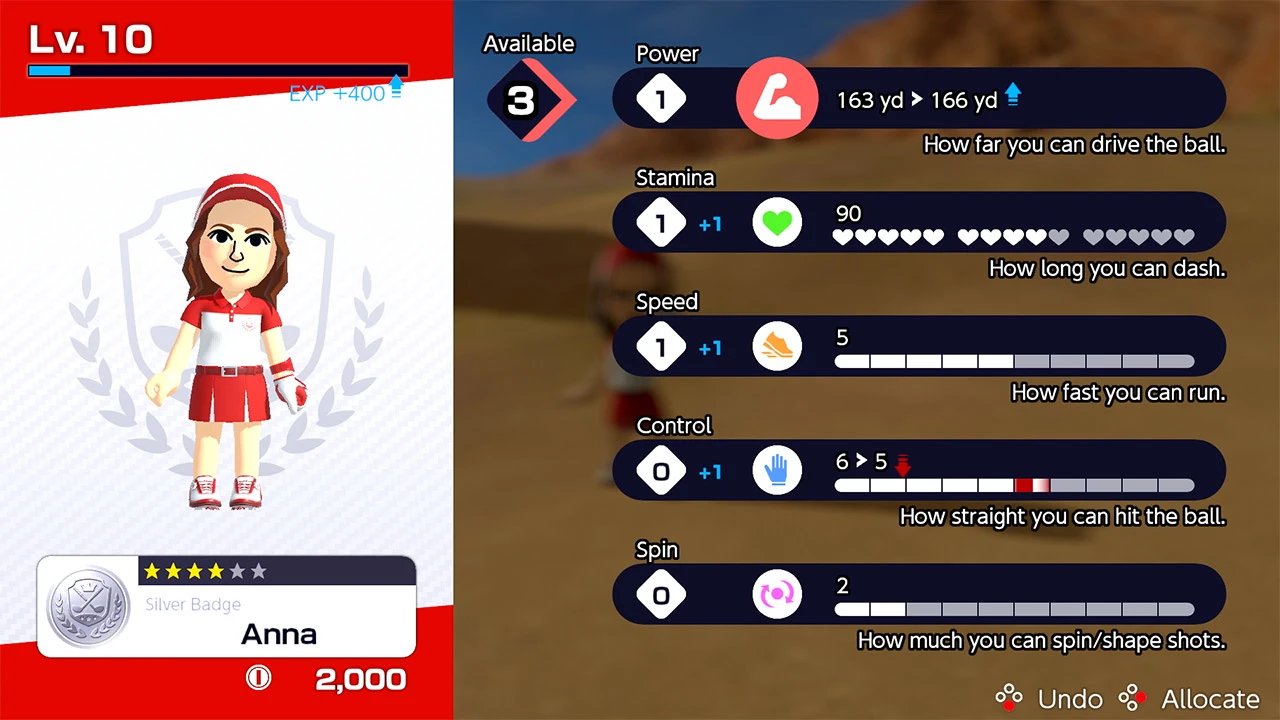 This is where you will first discover the leveling system for your Mii, which is pretty simplistic. The more challenges and competitions you complete, the more EXP you will earn and in turn level up. For each new level you reach, you will receive a point that can be spent to upgrade your Mii in one of five categories. These categories include Power, Stamina, Speed, Control, and Spin, which can also degrade over time as you level up further. You have free rein to decide which route you want to go with your Mii over time, with plenty of points to be had during your experience.

The Golf Adventure mode is essentially split into five areas based on the courses in the game. Each of these courses have a hub area surrounding them for you to explore. There isn’t a lot to do in each of these, but there are some challenges and such for you to try out for some extra EXP. The main goal in each is to complete the respective badge qualifier to upgrade to the next level, with the eventual goal being to obtain the Platinum Badge.

Each new location also introduces new wrinkles into the mix, including new gameplay styles as well as smaller gameplay mechanics that come into play. This includes the inclusion of XC Golf in Ridgerock Lake, where you have to go from hole to hole in a area full of elevations and obstacles like tornadoes and complete them all within a certain number of shots. The last few areas of Golf Adventure also add boss battles into the mix, which are quite enjoyable to play. 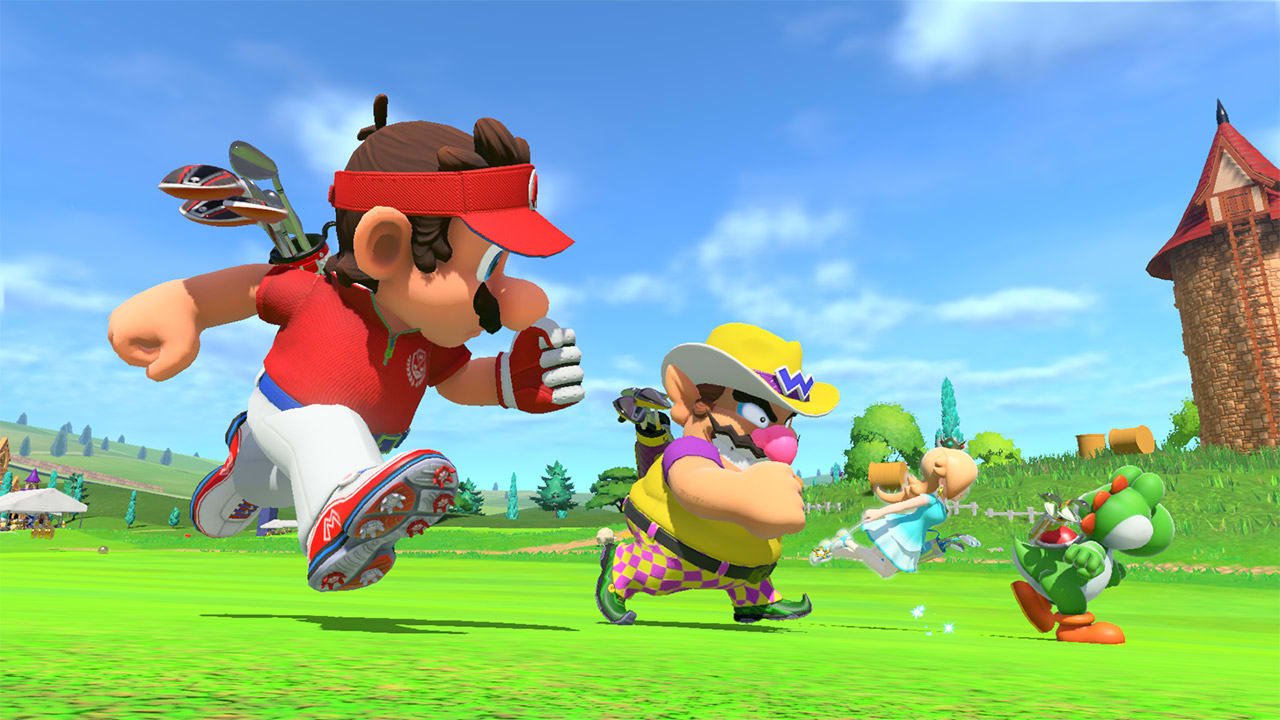 Having variations on the basic gameplay does make Golf Adventure feel fresh throughout, but the random nature sometimes makes you almost wish they had stuck with similar ideas at times and refined each of them instead. Golf Adventure as a whole feels a little undercooked in certain areas, never quite reaching the heights of the single player options in other Mario Golf games of the past. This is in large part due to not only the structure, but the lack of an interesting story or anything with what we already know to be charming characters.

The Mario Golf franchise has always been a relatively consistent series that you can count on to at least provide you with a solid golf experience. Mario Golf: Super Rush keeps that trend going, giving players fun and easy to learn gameplay alongside a decent, yet still a bit underwhelming single player campaign. The introduction of Speed Golf and Battle Golf really help to elevate the game for those looking for something a bit more, making Mario Golf: Super Rush a game to at least check out on the Nintendo Switch.

While it may not be the best entry in the series, Nintendo has at least managed to make par with Mario Golf: Super Rush by offering the core arcade style golfing experience players come to expect alongside some enjoyable new game types that will hopefully continue to get even better with future updates.