The latest news in the world of video games at Attack of the Fanboy
April 20th, 2017 by Dean James Ever since the release of Super Mario Kart in 1992 for the Super Nintendo, at least one game in the series has graced every Nintendo console. The latest entry in the series might have actually been the best one yet in the entire series, but sadly it was released on the unpopular Wii U. Rather than have to wait for the eventual ninth game, Nintendo has instead decided to bring the most recent entry to the Nintendo Switch with some new features in Mario Kart 8 Deluxe.

The Wii U was greatly lacking in power compared to its console counterparts, but Nintendo had a knack for getting the most out of their first party games graphically as they could. Mario Kart 8 was a great example of this, as it was one of the best looking games on the platform, though it was limited to only 720p at 60fps. With the move to the Nintendo Switch though, Mario Kart 8 Deluxe is able to take that next step by offering 1080p at 60fps while docked with one or two players. If you are playing with more than two players, the resolution will remain the same, but the frame rate will drop to 30fps. While this doesn’t perform quite as smoothly, the frame rate is going to be more of a concern with competitive play rather than the friendly play you’ll be having with three or more friends locally.

For those that plan on playing Mario Kart 8 Deluxe on the go in handheld mode, the game’s resolution will drop to 720p. This isn’t as much due to the game itself not being able to run that way, but more that the Nintendo Switch itself can only run at 720p period when in handheld mode. Either way, even with the handheld version, you’re matching what was the best case output on the Wii U, which is very impressive.

Like the previous release, Mario Kart 8 Deluxe supports a few different controllers schemes that all work quite well. The Nintendo Switch Pro Controller is going to be your best case scenario at home, though you can just as easily use the two Joy-Con controllers attached to the grip that comes with the system or with one in each hand. Surprisingly, even the one Joy-Con control scheme feels fine in your hands, though you will likely want the snap in accessory with a strap to make the shoulder buttons easier to control. 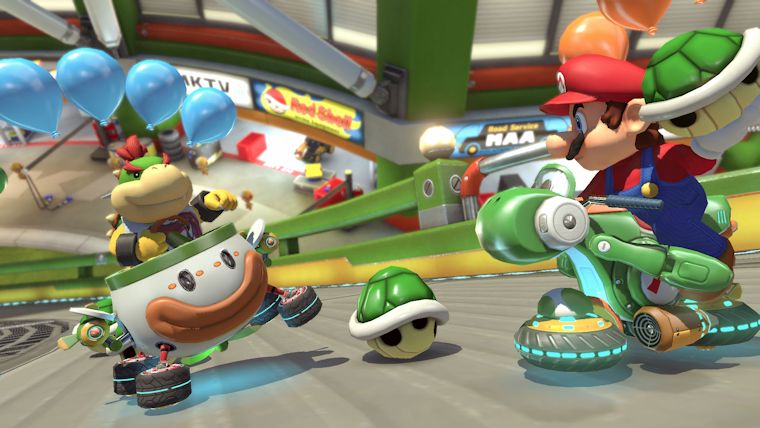 Mario Kart 8 was one of the first real examples of Nintendo embracing DLC, with a free update coming a little while after the game’s release that added 200cc Mode, the most intense style of Mario Kart to date. Rather than even make it an unlockable, it is available right from the start in Mario Kart 8 Deluxe, along with Mirror Mode, in addition to the usual 50cc, 100cc, and 150cc.

The race types may gradually increase in difficulty, but Mario Kart 8 Deluxe actually introduces a new feature to help beginners, which is known as Smart Steering. This feature that is turned on by default helps guide your vehicle on the track, sometimes more than others. This helps to keep novice players from constantly falling off the track or running into wall after wall, but thankfully it can be turned off on the vehicle selection screen before any race as any Mario Kart veteran will find this to be a bit annoying to have on.

Rather than having to continuously beat the different cups to gain access to a majority of the additional characters, you have 42 different ones to choose from right away, as well as the ability to use any type of Mii. Most of these are carried over from the original lineup, but this time there are a few new additions as well.

For those that never purchased the two DLC packs for Mario Kart 8, you will get your hands on newer characters like Link, Villager, and Isabelle for the first time, but Mario Kart 8 Deluxe also comes with a few characters that were not available in the Wii U version at all. Returning from past games are Bowser Jr., Dry Bones, and King Boo, while Inkling Girl and Inkling Boy from Splatoon join the race for the first time ever here, with each having three different color schemes available. In addition, there is one new variation of an existing character that can be unlocked, which does feel better than having to unlock so many like in the original release. 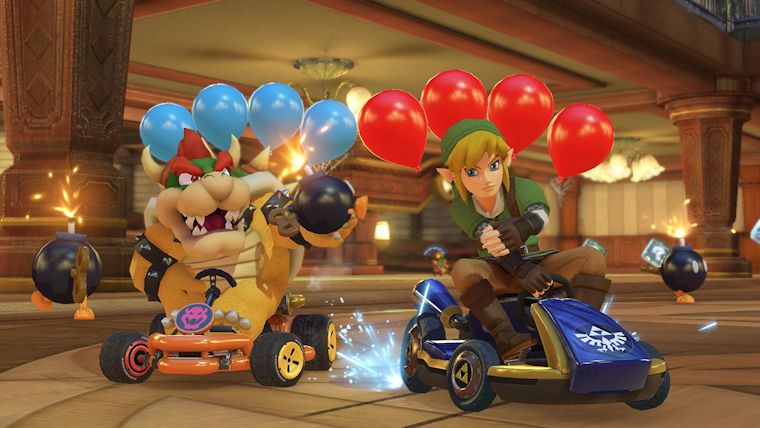 Though there are no characters to unlock, the game does limit the number of vehicles, tires, and gliders that you start with. By playing the various cups and such in the game, you can earn coins that will provide you with different unlocks the more you collect, even including the Mercedes vehicles. As always, the different vehicles and vehicle parts are rated in five categories, such as speed and handling, so unlocking more to find just the right combination is very important.

While the game does add a few new characters beyond even the DLC from the Wii U release, there are disappointingly no new cups or regular tracks at all. However, taking the original eight cups plus the four added through DLC that are available in Mario Kart 8 Deluxe from the get go, you still have 48 different tracks to enjoy that include a mix of those that were created specifically for Mario Kart 8 and those that are returning from past games in the franchise, with a fresh coat of paint of course.

Mario Kart 8 was considered a near perfect game on Wii U, but really the only letdown was the incredibly lackluster Battle Mode. Dating back to franchise’s start on SNES, Mario Kart has been known for having really fun Battle Modes that allowed groups of players to face off against each other in typically dedicated battle arenas. However, the Wii U release just took eight tracks from the other cups in the game and mixed in battle mechanics as you drive around the full sized tracks. While most of Mario Kart 8 is in tact here on the Nintendo Switch, the Battle Mode has been completely revamped.

The Battle Mode found in Mario Kart 8 Deluxe is made up of five different game types that can be played in one of eight battle arenas specifically designed for Battle Mode, three of which are remade from previous entries. Balloon Battle is the classic type that has survived throughout the years and still works well here as the game brings back the ability to respawn after losing all your balloons rather than being completely out for the remainder of the round. Another of the game types available is Bob-omb Blast, which is essentially the same basic setup as Balloon Battle except for the fact that you are exclusively using Bob-ombs. 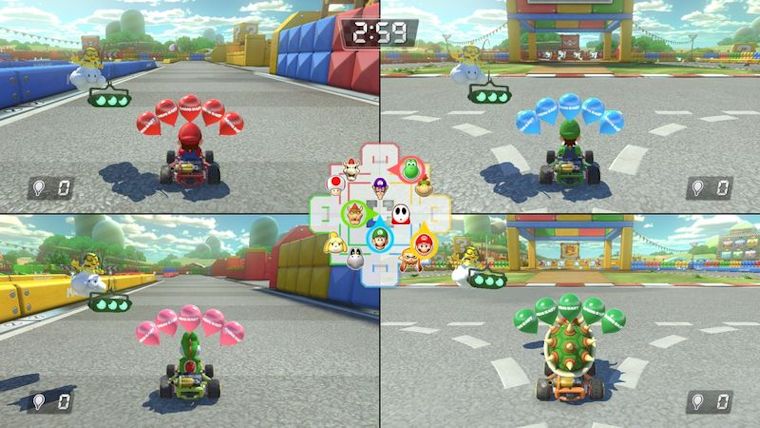 Coin Runners is as it sounds, with the goal being to collect as many coins as possible for you or your team, though you can also lose coins by being hit by items as well. Shine Thief is a variation on something like Halo’s Oddball game type, with one Shine Sprite available per round. By capturing the Shine Sprite, your team counts down to victory for every few seconds you hold onto it. While those four game modes can be played as solo or teams, the remaining mode requires you to use teams, known as Renegade Roundup.

Renegade Roundup is by far the most fun of the five Battle Modes game types, where teams of six face off against each other. One team will have Piranha Plant items the entire time and the goal is to capture the opposing team members in a certain time limit. However, the opposing team can free their team members by opening the jail cells located around the battle arena, making this a real challenge that often go down to the wire. This game type is an absolute blast and is a great example of how much fun Mario Kart can really be.

Items have always played a big role in Mario Kart both in regular races and in Battle Mode, and Mario Kart 8 Deluxe makes it all the more interesting by bringing back the ability to carry two items at once. This can be accomplished either by grabbing a double item block or just hitting two separate item blocks. In addition, there are also two returning items with the Boo coming back in the regular races, while Battle Mode also has an exclusive item that is returning from the SNES era, the Feather, which allows you to jump over barriers. 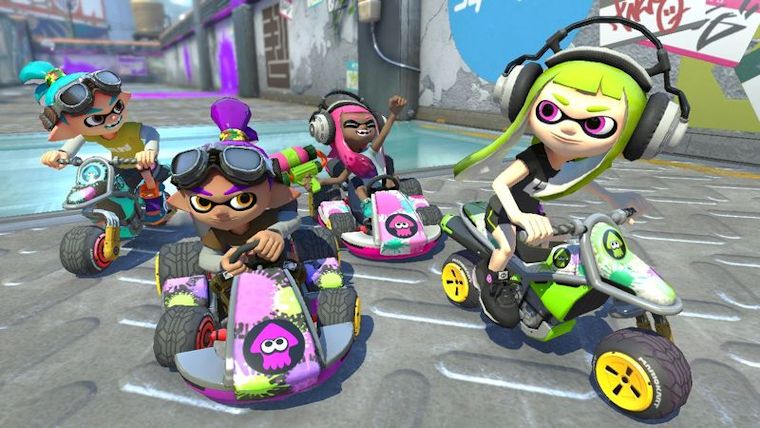 The online setup found in Mario Kart 8 Deluxe is mostly the same as it was on Wii U, with you able to take up to two players online together and choose to face opponents worldwide or just regionally. You can also race with just friends or host tournaments as well. For some reason, the ability to create custom races is gone outside of friends and tournaments, but it isn’t really a major loss overall. The big improvement however is that you can now change your character and vehicle from the in-game lobby between races, which greatly streamlines the online setup. Even though the Nintendo Switch’s online system hasn’t been around long, Mario Kart 8 Deluxe handled very well online. In the numerous races I got to try out online, the lag was pretty much non-existent and the wait times for races should go down drastically once the game releases to the public.

Mario Kart 8 was without a doubt one of the best games to release on the Wii U and now it has been improved on even further on Nintendo Switch. The game performs better than it ever has, this time with a crisper look that really shines both in docked and handheld forms. While it is disappointing that no new race tracks were added, the completely overhauled Battle Mode complete with eight arenas makes up for that easily, making Mario Kart 8 Deluxe the definitive Mario Kart experience to date.