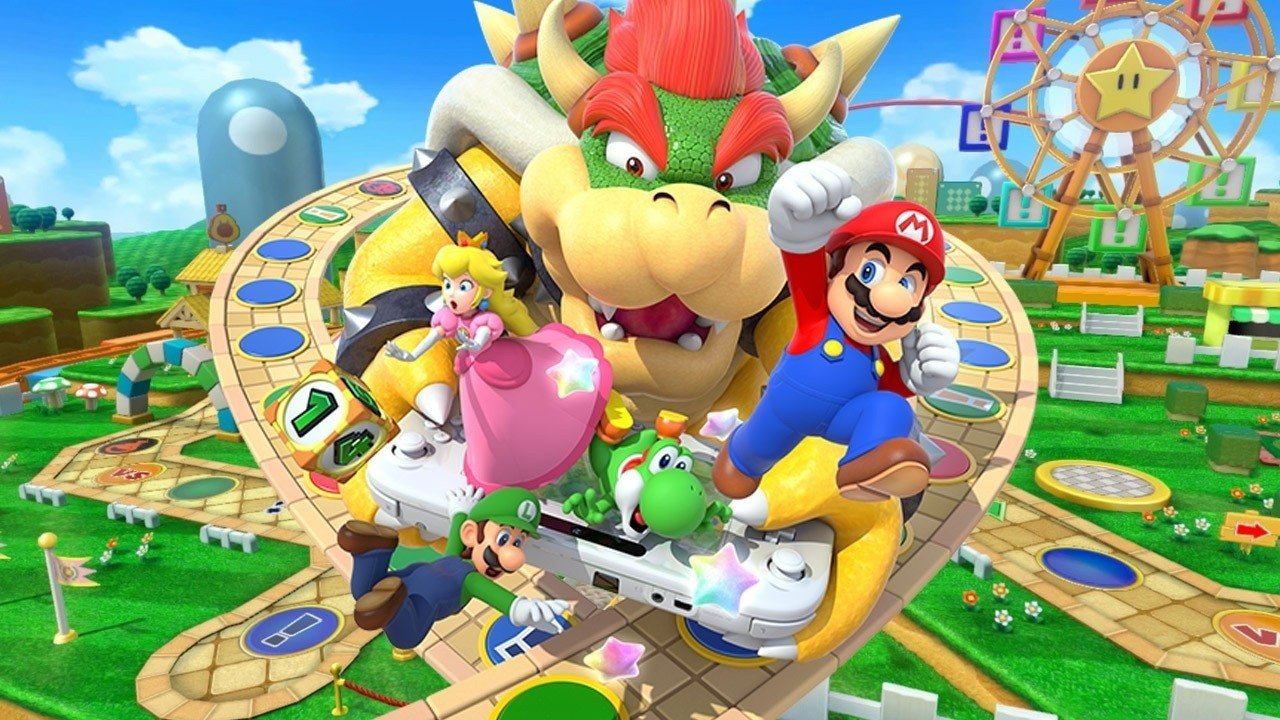 The Mario Party series finally arrives on the Wii U, bringing with it its usual brand of chaotic, random party game fun. Mario Party 10 offers up a few series firsts, such as HD graphics, and the use of the Gamepad. While it capitalizes on many of these new additions, a few items were neglected, to the detriment of the overall game experience. Even with that said though, Mario Party 10 is easily one of the most enjoyable party games available today. As long as you can handle the randomness of it all.

Mario Party 10 doesn’t break far from the formula that has let this series run for over fifteen years and ten games. Up to four players come together to play through a Mario-themed board game. Rolling dice, collecting mini-stars, and playing mini-games will make up almost all of your time in Mario Party 10. However, you’ll be doing all of this using Wii Remotes instead of the controller options available only on the Wii U, such as the Gamepad and Pro Controller. There is still a lot of life left in the old Wii Remote, but not using the Gamepad at all in the regular mode is a bit disappointing as it would have allowed for a much wider variety and a lot of mini-game innovation.

Instead Mario Party 10 largely continues off the innovations that were made to the series in the last entry. The graphics are, once again, up to the usual Mario standards, pulling character and world elements from Super Mario 3D World this time around. Gameplay is also very familiar if you played the last game, with all four players sticking together in a single cart as they make their way around the linear game board. The current driver gets all of the benefits, as well as the costs of whatever space the team lands on during his turn. They also get to make choices about where the entire group will go if they come upon a fork in the road. This allows for some great strategy as you plot out where you’ll be when you take charge, and what obstacles the other players have to drive through before getting there. 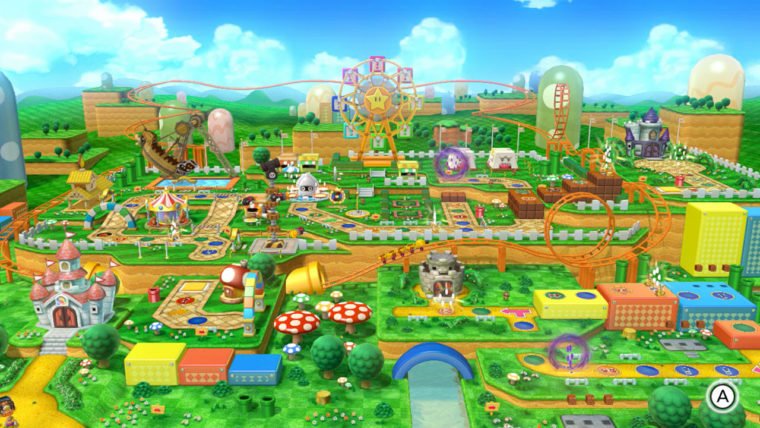 These obstacles will likely be the source of a ton of frustration for more competitive minded players. If you have played previous games then you already know that Mario Party is largely a game of luck. Players can be experts of their craft, winning every mini-game, collecting every mini-star, and simply dominating the other players on every front. One wrong roll of the dice, or some unforeseen game element thrown in at the last second can easily take you from first to last, literally. It is a “flaw” that has remained with the series for some time, much like the continued lack of online play. At this point it is obvious that these elements are not going to change any time soon. Players simply have to decide if they want a competitive experience that can be played online, or an accessible one with their friends in the same room. If it is the former then Mario Party 10 is probably not for you. Instead it is meant for anyone, including non-gamers, who want to simply pick up and play, and have a good time, without worrying about who has the most skill.

The antics on the game board are certainly fun, but it’s the over 70 new mini-games that will keep players interested throughout. While there aren’t really any games that stick out as true classics, there also aren’t too many duds. Each game feels fresh and fun, even if it is recycling some gameplay idea from previous mini-games. Sure, all you’ll be doing is using the Wii Remote as a classic controller, or performing some repetitive motion, but the themes make for an enjoyable experience nonetheless.

The only use for the Gamepad in basic Party Mode is to show when Bowser will be unleashed upon the board. Once each number on the die is rolled he will be set free, wreaking havoc on not only the player that released him, but also setting a number of traps along the rest of the board. Not using the Gamepad for any of the mini-games seems like a huge missed opportunity. Having one player use the Gamepad, or passing it around, would have allowed for a lot more diversity in the gameplay spectrum. There are even games where it is one player versus the other three, making for the perfect chance to whip out the Gamepad, but Nintendo took the easy way here. 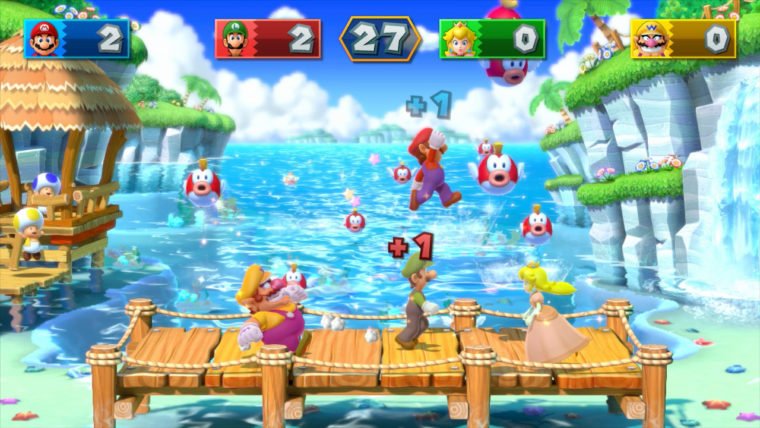 There is one mode that does use the Gamepad rather frequently, and it is easily Mario Party 10’s greatest addition to the series. Bowser Party Mode puts one player in control of the perpetually angry antagonist, pitting them against up to four other players. Team Mario, as they are called, simply have to make it to the end of the game board where they can grab the Star. However, Bowser is right on their tail, and if he catches up they’ll have to play through a Bowser controlled mini-game. Instead of mini-stars, players have hearts, if they run out of hearts they are out of the game, until the remaining players can revive them at least. Bowser’s job is to knock out all four players by smashing, hitting, or otherwise injuring them in his mini-games.

The player controlling Bowser has the Gamepad and will use its many unique functions to perform these actions. For example, one game has the player looking around and blowing fire at his enemies. Another, which will surely be a favorite, puts all four members of Team Mario into a giant hamster wheel with electrical borders on each side. Bowser can spin and stop the wheel at any time as he tries to get the players to run into the electrical borders. Watching as your friends slam face first into the wall, then speeding the wheel up so they hit the back one as well will always make for a good time.

One flaw holds Bowser Party Mode back though, there simply aren’t enough games here to make it truly worthwhile. I counted about a dozen or so, with many being repeated just on my first time through. All of them are enjoyable in their own way, but there just isn’t the type of variety that one expects from a Mario Party game. This is likely due to it being a new addition for the series, so Nintendo hedged their bets and put most of their effort into the main game. But the gamble paid off and Bowser Party Mode could have easily been worth the price of admission, had they included more content. 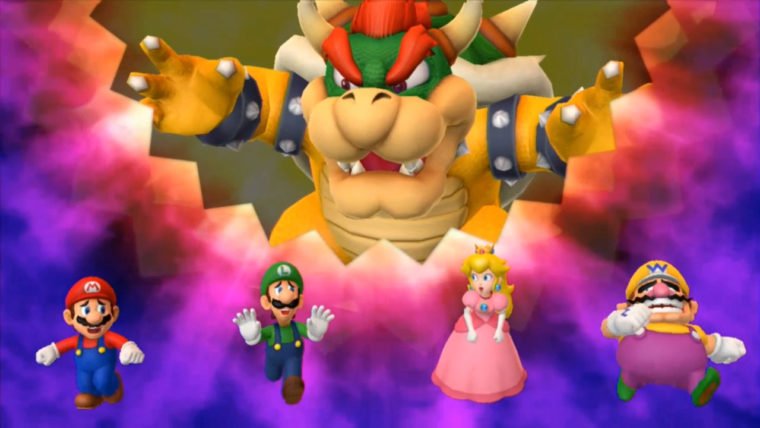 If you want to compensate for this overall lack of content, you’ll need to grab a few Amiibo, as they are heavily featured in Mario Party 10. Really, you only need one to unlock the mode, but more will certainly make for a better experience. The Amiibo Party is actually somewhat of a throwback mode, featuring the classic coins and stars setup from previous games. You move around a square board and try to collect stars. You are separated from the other players this time, and you’re all racing to get to the star, which appears at a random spot on the board. Once there you can buy the star if you have enough coins, otherwise you miss your chance and have to try for the next one.

The actual use of Amiibo in this mode can get a little annoying, as it requires you to constantly be tapping it against the Gamepad. However, if you have some lying around and have been wanting to use them in a game since Super Smash Bros. for Wii U, then this will certainly fit the bill. Kids are likely to really love it as they will always be interacting with their Amiibo in some fashion, whether its tapping to roll the die, or placing it so you can gain a new powerup. Having this setup as more of a classic mode is great as well, especially for those that might not take well to the combined movement setup that has become the norm for the series.

Mario Party 10 continues the legacy of the series without trying to fix what wasn’t broken. The core is all the same, with a few bells and whistles thrown on to shake up the basic formula. If you’ve been enjoying that formula then this is definitely the game for you. However, if it has been getting stale, or you’re looking for a more skill-based experience, you might want to look elsewhere. When it comes down to it though, you’ll rarely have a better time with a few of your friends then when you’re playing Mario Party 10.