The Mario vs. Donkey Kong series may have officially debuted on the Game Boy Advance in 2004, but the series truly started back on the original Game Boy with Donkey Kong ’94. Rather than offer gameplay as simplistic as the original arcade version of Donkey Kong with Jumpman, Mario instead must solve puzzle after puzzle to best his rival Donkey Kong. The series has now returned, yet again, with a bevy of new and creative puzzles that make excellent use of the Wii U GamePad and 3DS touchscreen respectively.

The Mario vs. Donkey Kong series has always thrived on the unique puzzles that are split across a number of worlds. Starting off, the stages are rather simplistic with only one or two Mini Mario to control, along with the use of the red girder item. Upon advancing to further worlds however, a myriad of new items and obstacles will appear that add even more life to the puzzles.

Dating back to Donkey Kong ’94, each new world begins with a short cutscene that showcases the new mechanic found in that world. The new items that pop up almost always mix up the gameplay drastically, but unlike some of the past games, the environments that surround them are pretty lackluster. While the names change, from locations like the Jungle to a Warehouse or Desert, there is little to set them apart outside of the color scheme. It would have been preferable to see distinct changes to the stages themselves, not including the new items, within each world.

Across the six main worlds and two unlockable extra worlds, players will find 64 total stages to play, each of which offers a Bronze, Silver, or Gold trophy for completing with a certain number of points. Unlike so many other games that follow a similar pattern these days, thankfully Mario vs. Donkey Kong: Tipping Stars never holds players back from a stage because they do not have enough stars or trophies to continue. 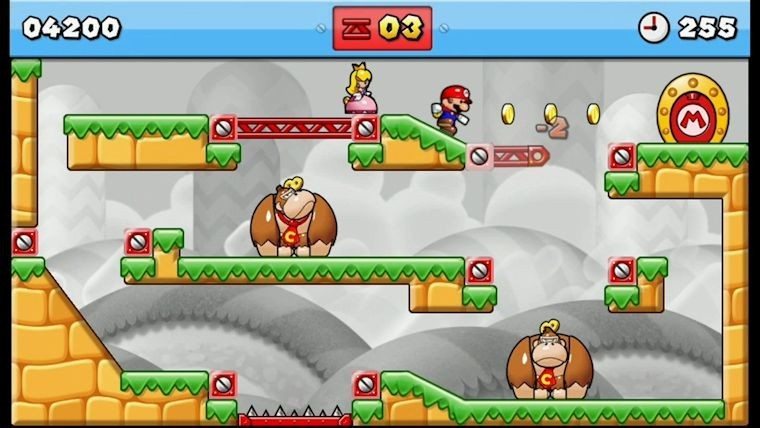 To advance to the next stage, a player simply must beat the level prior. This means the overall playthrough could be shorter than with games that choose to take that route, but it is a far superior option regardless. There are 24 bonus stages found in the main menu that are unlocked by the number of Gold trophies earned as well, but those are merely a post-game bonus for those that work to earn them.

Within each world, there are three different types of stages you will find. The first and most common just involves Mini Mario and pals moving towards one specific door to complete the stage, with all of them having to reach it within the same time vicinity. Another involves multi-character doors, where there is a door corresponding to each type of Mini in the stage, including Mario, Pauline, Peach, and more. These have no time requirement surrounding them, so it allows for more complicated and widespread puzzle challenges. Lastly, there is the boss level of each world, where one Mini Mario will be cursed and has to be hit with a hammer to complete the stage by reaching a single door.

Offering these three different stage types throughout the game makes the gameplay experience all the better by mostly avoiding repetition. With the new item integrated throughout the game, these three get even more complex and all the more interesting to solve. With so many levels in the game, it would have been nice to see a few more distinct stage types, but it is far from a problem in this game.

For the first time in company history, official cross-buy has been implemented by Nintendo in Mario vs. Donkey Kong: Tipping Stars. When purchasing either the Wii U or 3DS version, you will receive a code for the other platform. This is a great step for Nintendo to make, as it has a lot of potential moving forward. However, the method that they use hinders any chance of cross-save functionality, which this game is just begging to have. 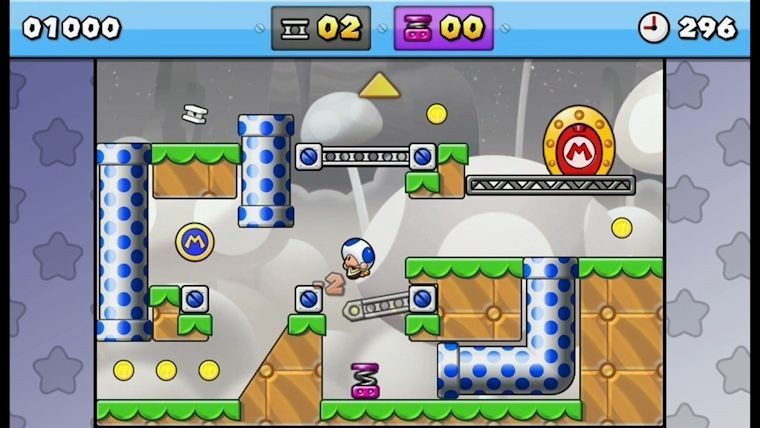 With having a puzzle game that can be played on both platforms, which happens to be broken up into various stages across a number of worlds, it would have been nice to have been able to share a save between the two. If you prefer to play the game at home on the Wii U and then leave the house and still want to play on the 3DS, you will have to start the whole game from that separate save point. This isn’t a major problem, but would have been something really useful to have, which hopefully Nintendo will look into moving forward.

The good news is that there is one method of sharing between the two platforms in Mario vs. Donkey Kong: Tipping Stars, which comes from the Workshop and Community portion of the game. The Workshop is one of the best additions ever made to the series, allowing players to design their own stages completely from scratch.

Choosing from either the single-door or multi-door stages, you will have an abundance of items at your disposal, from red girders, purple conveyor belts, springs, and even special items you will not unlock until the Extra stages. Any of the various obstacles can be added as well, even Cursed Mario upon purchasing him with in-game stars. Luckily, the game does not offer micro-transactions within the Workshop Store, so everything is earned completely within the game itself.

Within the Community area, you can upload any stages you may have designed on either version of the game. From there, you can find and play other levels designed by gamers around the world. With Miiverse inactive prior to release, it was impossible to see the share capabilities through that service, but everything else seems to work well. Exclusively on the 3DS, stages can also be shared through StreetPass, which is an excellent feature to include. 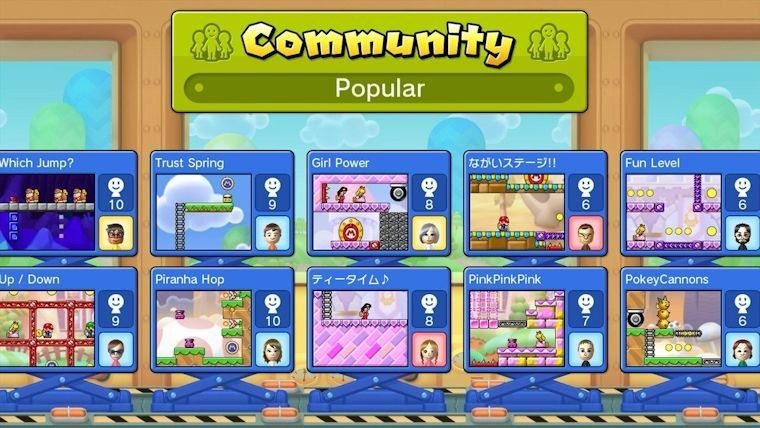 The name of Mario vs. Donkey Kong: Tipping Stars actually comes from this area of the game. After finishing a custom level, you may tip the creator with stars that you earned through the offline or shared stages. For tipping other players, you will receive collectible in-game stamps as well. However, there really isn’t all that much to the whole tipping element, so it is kind of odd that the game was named after it.