The latest news in the world of video games at Attack of the Fanboy
September 9th, 2017 by William Schwartz 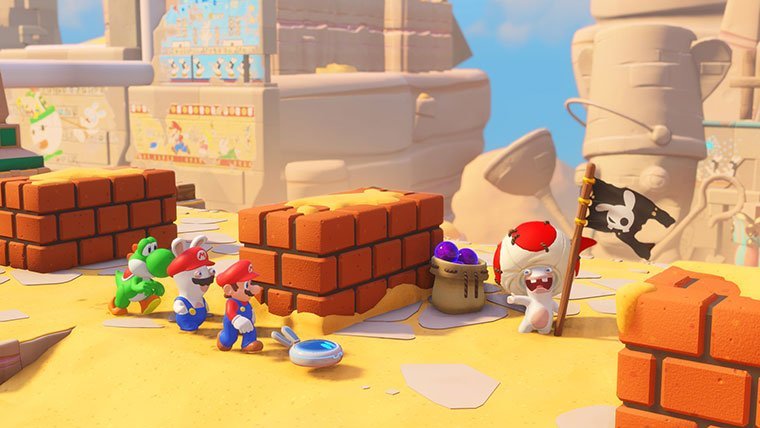 Nintendo’s Super Mario characters and the Rabbids are an unlikely pairing for a game coming exclusively to the Nintendo Switch.  What’s even more unlikely is the mash-up between these two franchises for a turn-based strategy/adventure game.  That’s exactly what we have here in Mario+Rabbids: Kingdom Battle.  It’s an utterly strange game.  Strange in the fact that Nintendo allowed for the pairing with its flagship franchise that has keenly been watched over by Shigeru Miyamoto, handing over development duties for a game that sees the entire cast of the Super Mario games in a game developed by Ubisoft.  Mario+Rabbids: Kingdom Battle is an unexpected surprise even if it doesn’t quite hit the high notes of either the Mario series or best in breed turn-based games.

The crossover between these unlikely allies is explained by the misuse of an invention that has turned the Mushroom Kingdom on its ear.  The SupaMerge helmet is a device that can merge any two objects into one thing.  The helmet ultimately merges with a Rabbid who is unwittingly causing this madness in the Mario universe.  Noticing the chaos being caused in the Mushroom Kingdom, and father away, Bowser Jr looks to seize the opportunity.  Junior befriends the Rabbid and names them Spawny.  Mario, Luigi, Peach, and Yoshi team with the Rabbids to try and track down Spawny and put things right.  While it sounds completely ridiculous, it works in weird ways that you’d never see coming from Nintendo. 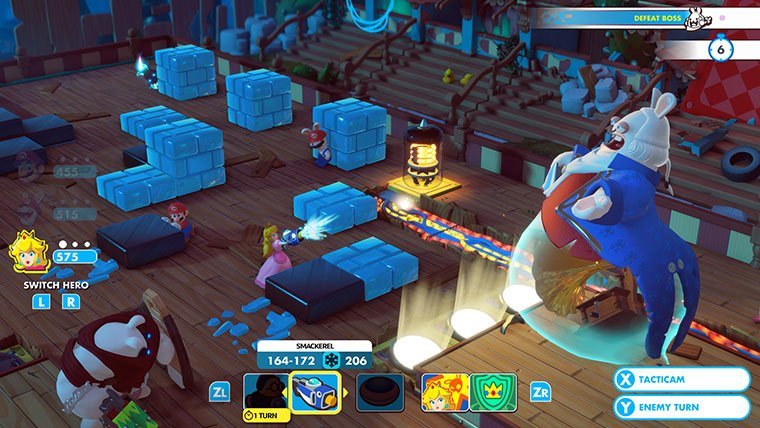 While we’ve seen turn-based Mario games in recent years, Kingdom Battle is something wholly different in terms of gameplay.  A mixture of turn-based strategy, customization, and puzzle solving are the core pillars of Kingdom Battle. These are tied together with familiar hooks from the Mario series with each character having abilities that you’d expect to see in a main line entry in the series.  While the look and feel of the game, very much hold to a level of quality that you’d expect from Nintendo.  While it might not be from Nintendo, you’d be hard pressed to tell the difference with an incredible attention to detail in terms of visual and audio presentation.

While it might not be from Nintendo, you’d be hard pressed to tell the difference

The turn-based combat gameplay is also somewhat strange in that the core powers of the characters are guns.  The characters from the Mushroom Kingdom toting Mega Man-style blasters is a new tone for the series, but it’s really the only thing that makes this game work, as a combination of projectile, melee, and special powers are the core abilities that your team will use to take down Rabbids with similar abilities.  The Nintendo Switch audience doesn’t seem like it would be the target for a turn-based combat game, but Kingdom Battle toes the line between being challenging and accessible in a way that is unexpected.  I’m not a huge Nintendo fan, but the combination of this strange shake-up in the Mario universe and gameplay that’s deep enough that you’ll need to think tactically make for a great combination. 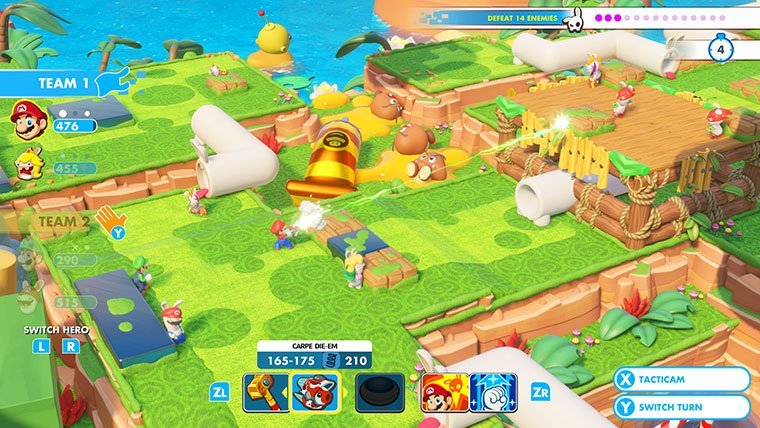 While the gameplay is more simplistic that other games in the genre, the rules are fairly easy to follow.  If you have a clear shot at an enemy, you have a 100% chance of hitting them.  If they are completely behind cover, you have 0% chance of hitting (but the ability to possibly destroy their cover).  If they are in low cover, you have a 50% chance.  While this might sound too simplistic it actually works really well for this game.  The random number generators that govern many turn-based combat games can be frustrating at times, and Kingdom Battle smartly navigates this territory with a focus on mobility of the characters and map designs that have numerous ways to outmaneuver your enemies to either get in position for shots or get into cover to defend.  Characters can work in tandem to get into advantageous positions, utilize stomping and sliding mechanics that we’ve seen in the mainline Mario series, it all feels really good on the combat side of things.  Are there deeper strategy games out there?  Yes, there are.  But there’s a nice middle ground here, and for those that find the game too challenging there’s an easy mode if you’re just here to see the great sights and sounds.

Gameplay is more simplistic than others in the genre

It wouldn’t be a Mario game without coin collecting, and most of Kingdom Battle’s progression system is tied to the coins you collect during your time in the game.  Whether on the battlefield or exploring the overworld, there are numerous opportunities to collect coins which you’ll use to buy new weapons for your team of characters.  There’s a good bit of variety here.  You can pick your team from a group that expands across the course of the campaign and is comprised of both Mario and Rabbids characters.  Each have their own abilities to start, but these can be expanded upon through a skill tree.  Solving puzzles and finding secrets in the world will allow you to earn a secondary currency which is used to purchase these upgrades.  With expanding overworld abilities added as well, Mario+Rabbids has plenty of secrets tucked away in Metroid-vania fashion in earlier levels.  There’s an entire collection of things to discover in the game, some alter the combat in unique ways while others are stuff like concept art, music, and other bonuses. 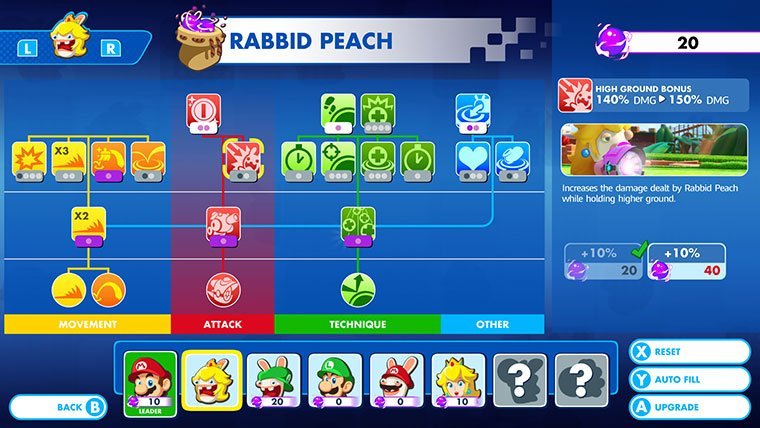 The game looks great on both the big and the small screen.  Mario+Rabbids really is a great game for the handheld mode of the Switch though.  The turn-based gameplay allow it be picked up and put down when necessary, and it like the many other acclaimed titles to hit the Nintendo Switch, there’s really only a marginal difference between the two methods of play when it comes to visuals.  With a fledgling online service, you might expect that Nintendo or Ubisoft would decide that this game, like many other TBS titles, would include some sort of online multiplayer.  Sadly, this is not the case in either cooperative or competitive modes.  There is a local co-op mode that allows players to team up, each controlling two characters of their choosing.  Players can use either two Switch controllers, or break apart the Joy-Con to play with each half and this works quite well.

An unlikely mash-up, Mario+Rabbids is a very unique game.  The turn-based strategy elements aren’t going to be for everyone, but for Mario fans this alternative look into the Mushroom Kingdom isn’t worth passing up.

Mario+Rabbids: Kingdom Battle Nintendo Nintendo Switch
You May Like