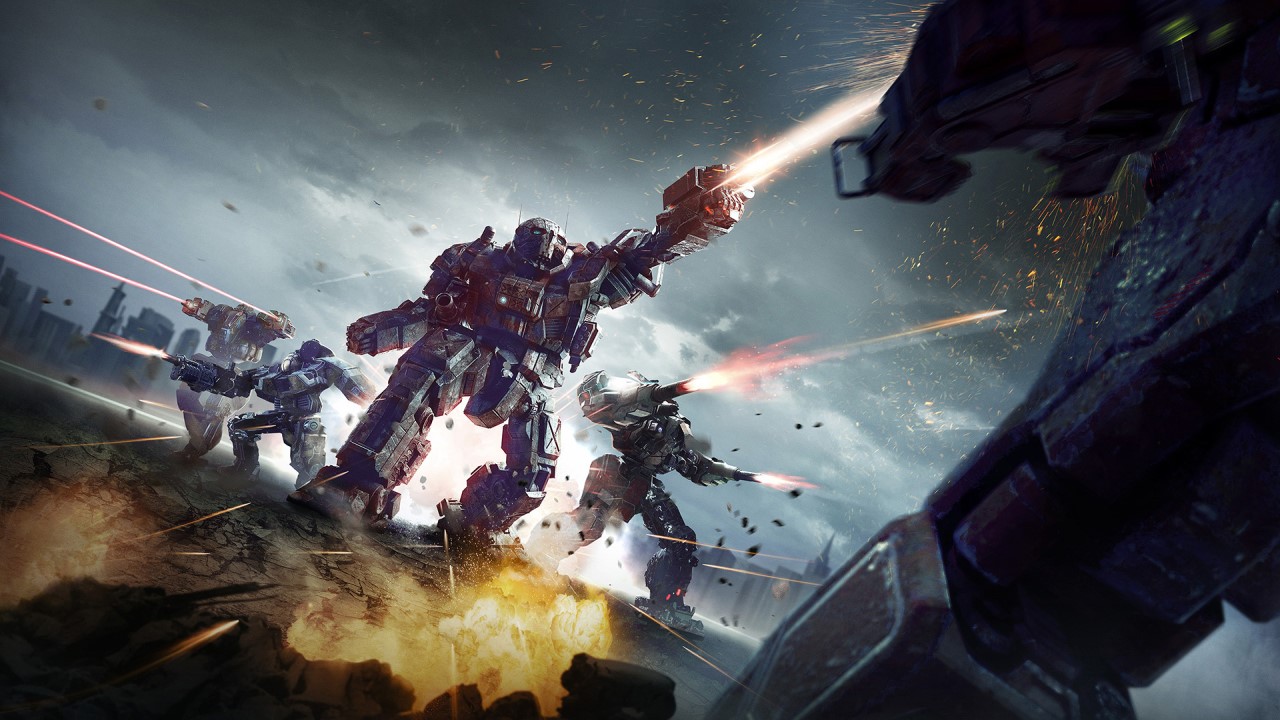 MechWarrior 5: Mercenaries had a bit of a tumultuous launch back in December of 2019. Though some critics loved it, such as myself, the game’s various failings did little to assuage the concerns of an already skeptical fanbase. From the wonky A.I., problematic spawn logic, lackluster story, and overall performance issues it’s hard to fault the MechWarrior community for begrudgingly adopting MechWarrior 5.

Fast-forward over a year and a-half later to today. After an initial delay for further polish and to get out of the way of CD Projekt’s Cyberpunk 2077, the first DLC for MechWarrior 5: Mercenaries has dropped – Heroes of the Inner Sphere. If you want the boilerplate assessment, well, it’s certainly motivated me to reflect back on my initial review.

To be blunt: I clearly scored MechWarrior 5 too highly at launch (if only by half a star or so), because Heroes of the Inner Sphere is precisely how the giant robot stomping and thrashing simulator should have deployed. 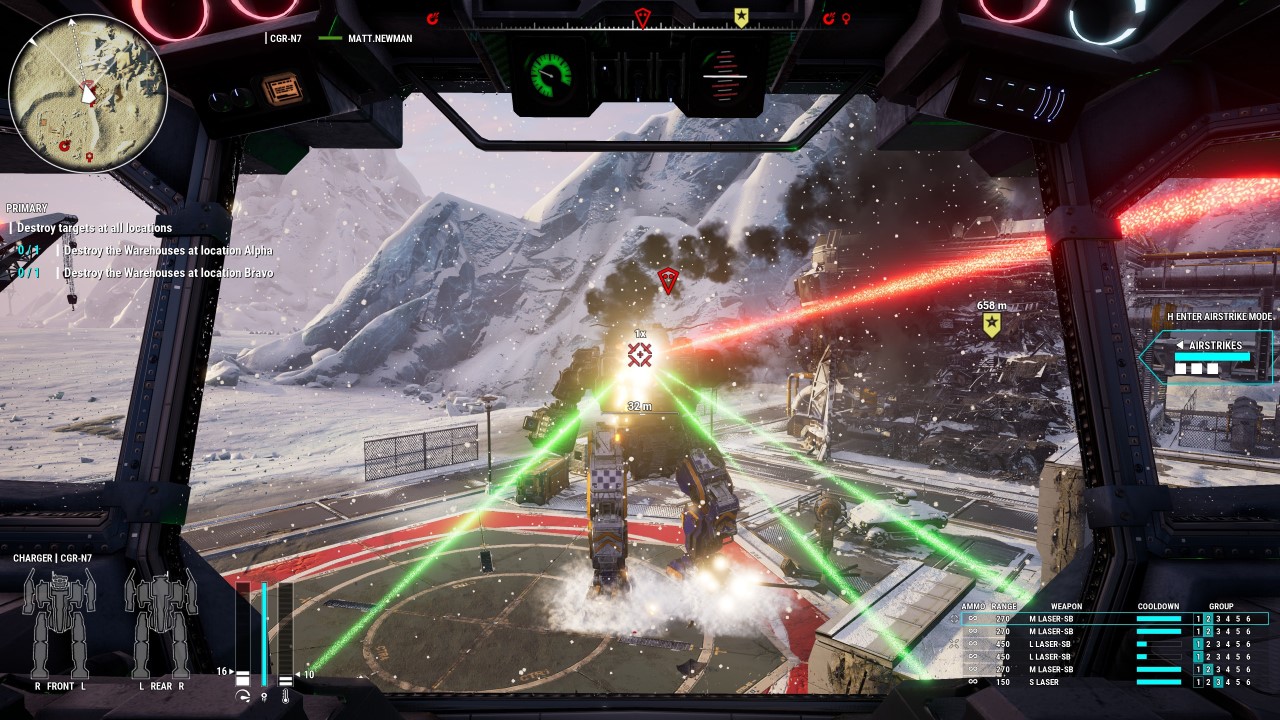 The MechWarrior 5: Mercenaries – Heroes of the Inner Sphere update benefits all pilots.

Before I even get into what Heroes of the Inner Sphere adds to the game, I want to address what the accompanying patch fixed, since the changes affect both the DLC and the base game. First and foremost, the entire economy has been rebalanced for the better. In MechWarrior 5: Mercenaries, players tour about the Inner Sphere taking on odd jobs to collect C-Bills, salvage, and reputation. While rep was a flat reward, C-Bills and salvage shares earned in a mission could be increased via Negotiation points. The higher your reputation with a faction the more points you had to boost your potential payout and haul.

The balance was a bit off, though. See, you could also negotiate an insurance payout that would cover BattleMech damage, but it’d cost an immense number of points to absorb the weighty costs tied to heavier mechs. That, and the initial allotment of available points was meager at the start of the game. This made it hard for players to stock up on weapons and mechs early on, and in the late game it led to players having to prioritize insurance over everything else.

Thankfully, Piranha have boosted not only the number of reputation points earned via faction reputation increases, but have also increased the amount of damage each pip of negotiation in insurance covers. This paired with the sweeping changes made to the in-game shops and economy allow players to more freely opt for increased salvage shares and a larger payday without fretting over whether they can repair and replenish their BattleMechs or not.

The second substantial quality-of-life change in the Heroes of the Inner Sphere patch finally made it so enemies no longer (or at least rarely) spawn directly on your ass. Previously, enemy vehicles and mechs would just generate out of thin air on your flank. Naturally, this meant increased damage and higher repair bills (which fed into the insurance problem). It didn’t feel very realistic either. Mods did ultimately address the spawn problem, but as of the Heroes of the Inner Sphere patch they’re no longer a mandatory install. 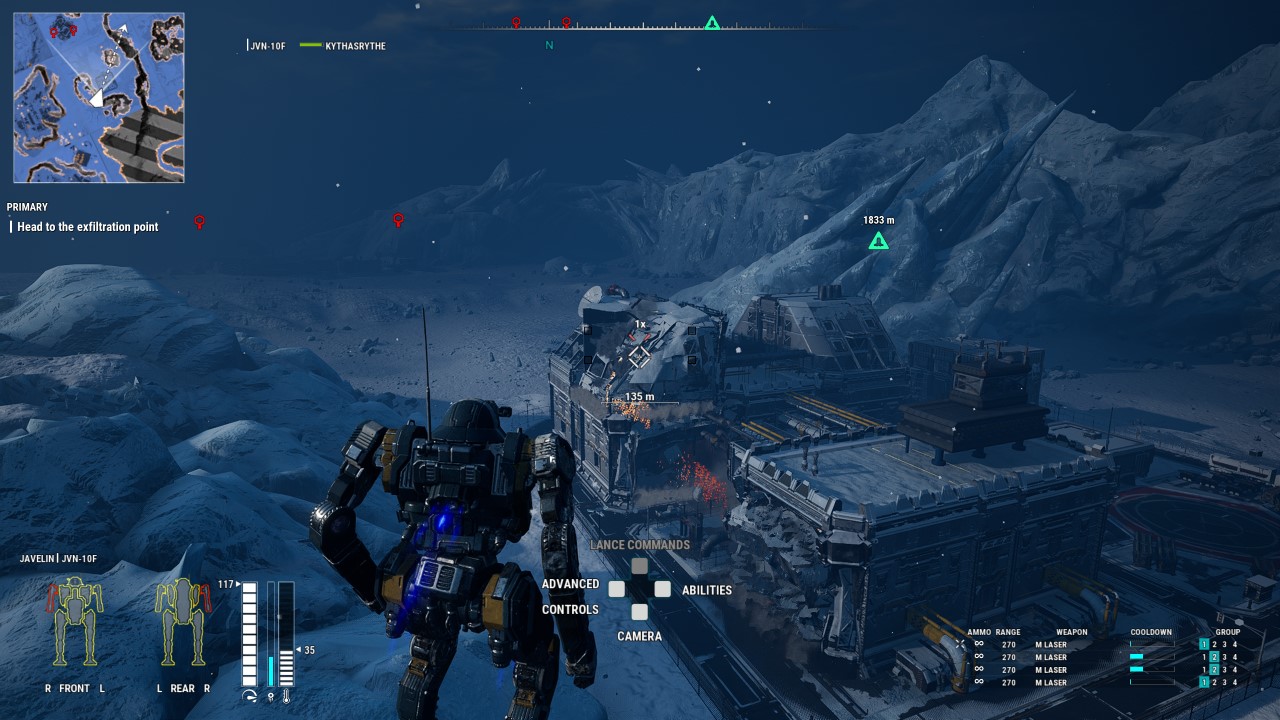 Smaller changes worth noting are overall improvements to both friendly and enemy A.I., a general performance uplift, a much better intro cinematic, a lore-friendly and easy to parse news feed, improved music, various new weather effects that impact gameplay, and little tweaks to the control settings. Even without owning Heroes of the Inner Sphere, anyone picking up MechWarrior 5: Mercenaries today is grabbing a substantially better game than the one that dropped in 2019.

Seeing as MechWarrior 5: Mercenaries has made the jump to console and is on the Xbox Game Pass I’m pretty confident the number of first time pilots is rather high. The Heroes of the Inner Sphere DLC isn’t include in Game Pass (which is pretty standard for DLC on the service), but the quality-of-life patch that went live alongside the expansion does ensure the greenhorns are in for a better initial experience than those of us who jumped into MechWarrior 5 on Day 1. Oh, and the game is on Steam now, so those PC fans out there adverse to buying games on the Epic Games Store can finally partake in the rampant robot destruction.

As for console, MechWarrior 5: Mercenaries runs well on the Xbox Series X, but performance isn’t entirely perfect. While the Heroes of the Inner Sphere patch did improve overall frame-rates and stability on PC, the ray tracing setting still incurs far too heavy a performance penalty to merit enabling. On Xbox Series X, however, it appears ray tracing is on, and while the port runs mostly at 60 frames-per-second, drops are not uncommon when near explosions, and the first-person Mech Bay struggles to maintain a coherent frame-rate.

But, that last bit is easily ignored outside of MechWarrior 5: Mercenaries’ stupid “talk to Fahad/Ryana” objectives. The game plays well on a controller too, though experienced pilots will want to disable the throttle decay that’s enabled by default, and will want to tweak the aim-assist to best fit their preferred weapon types. All said, the Xbox port is pretty solid on the Series X, though I have read the Series S and One versions are not entirely optimal. I can’t speak to their states personally, but if you somehow have a Series X I recommend the port. 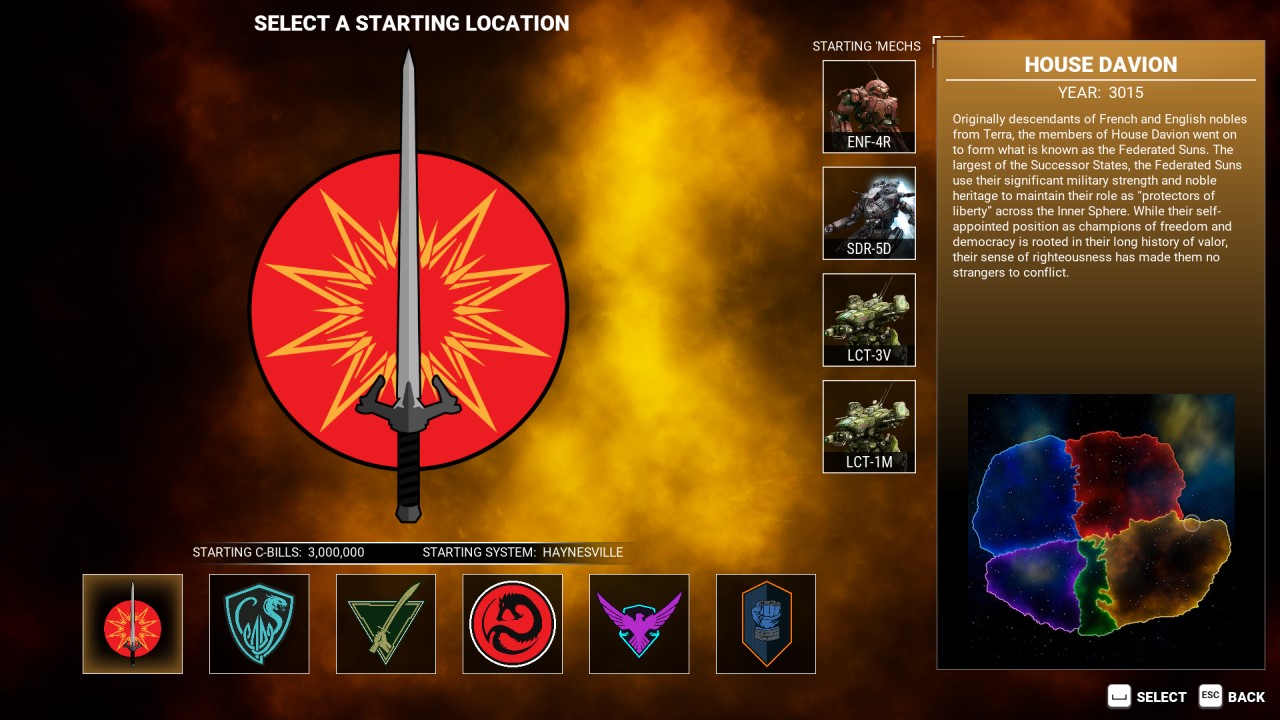 Heroes of the Inner Sphere is the best way to play MechWarrior 5: Mercenaries.

Now, on to the true star of this review: the first MechWarrior 5: Mercenaries DLC itself, Heroes of the Inner Sphere. In short, it’s awesome. The marque new addition is Career Mode, which is far, far better than the campaign. I mean, the campaign isn’t actually all that bad from a gameplay perspective, and it’s the best place for greenhorns to start. But, the open sandbox nature of Career mode is simply superior, and that’s before factoring in the new Cantina missions and mech upgrades.

In Career Mode pilots can pick one of six houses to start, each with their own starting lance and beginning sector of the Inner Sphere. From there they’re free to take on missions as they see fit. Pilots still need to grind up their mercenary company’s rank, recruit and level pilots, and buy better mechs and equipment, but they’re now free to do so at their own pace.

The open sandbox nature of Career mode is simply superior, and that’s before factoring in the new Cantina missions and mech upgrades.

In addition to the more sandbox approach, Heroes of the Inner Sphere adds 7 new Hero mechs, 7 new BattleMech chassis, 50 new mech variants, a a handful of new weapons and equipment (like the 360-degree BAP radar and Chemical Lasers). There’s even a new “extra solar” moon biome and mission-type called “Beachhead.” Both are incredible in their own right, with the solar moon biome possessing one of my favorite skyboxes in recent memory. Beachhead is a multi-objective mission that’ll test your mech piloting skills and is perhaps one of MechWarrior 5’s most satisfying experiences.

Atop all of that are the new Cantina side missions that feed into the added Career Jobs. There are five Jobs total, each with ten upgrades that can be unlocked by completing those fancy Cantina side missions. These additional objectives help liven up the gameplay loop in MechWarrior 5, even if they aren’t the most creative tasks out there. Knowing I need to acquire and turn in a Commando mech, for instance, meant I actually used mission intel to scout out where to find one, and I made sure I was properly equipped to leg the bastard to better increase my odds of salvaging one.

The Career Job upgrades themselves seem small at first, but their bonuses are additive. So, while one or two upgrades may not seem all that impactful at first, installing a whole set of them on a mech can turn a mediocre chassis into an absurdly deadly powerhouse. These upgrades are not cheap to install however, but they do offer pilots an extra way to specialize and improve their favorite mechs outside the standard Mech Lab. Both systems provide pilots engaging long-term goals to pursue, which in turn lends the more open-ended sandbox approach in Career mode some appreciated focus. 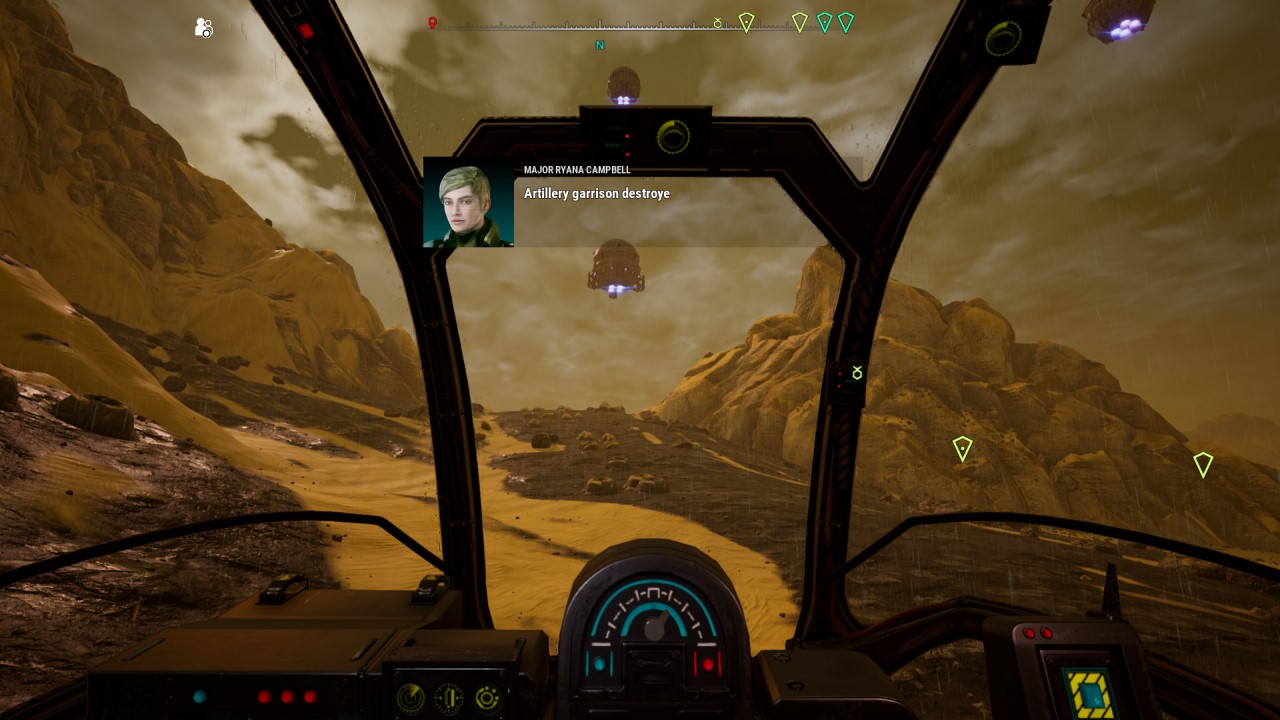 All of the new additions and more sandbox Career Mode arguable make Heroes of the Inner Sphere the best way to play MechWarrior 5: Mercenaries. The new mode allows pilots to forge their own path within the embattled Inner Sphere, while the Cantina missions and Job upgrades provide enticing long-term goals. All the other tweaks, changes, and adjustments made in both the quality-of-life patch and DLC itself are simply compelling bonuses.

I still have some minor grumbles. The UI remains flat and I’d like an in-game option to center my radar (and the ability to disable the D-Pad element on Xbox). I still would like to see a way to carry some progression over from coop play (though the addition of crossplay is an objective win). Hell, even a proper Quickplay queue would be amazing. Yet, those are all small complaints now, thanks to Heroes of the Inner Sphere addressing most of my major gripes from MechWarrior 5’s launch. On both PC and Xbox, Heroes of the Inner Sphere is worth every C-Bill.