The latest news in the world of video games at Attack of the Fanboy
August 8th, 2017 by Mark McLean 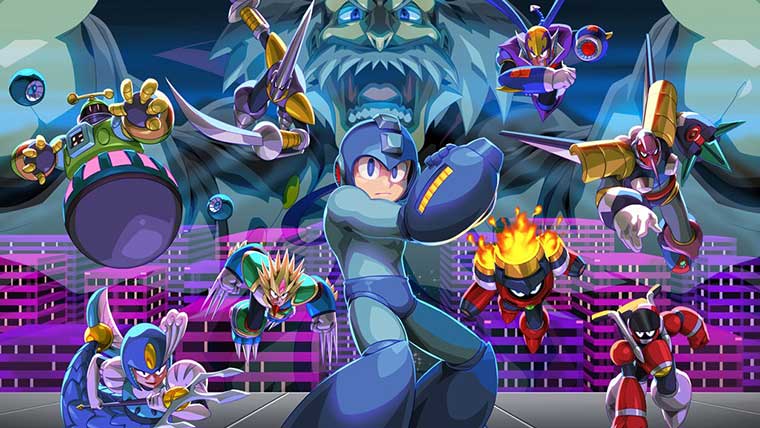 For those not already aware of the Blue Bomber’s adventures, Mega Man is a series of rock-hard platform games that began in the 8-bit generation, originally an early mascot for Nintendo alongside Mario and Link, Capcom’s challenging, addictive franchise has seen 10 episodes in its main series, and over one hundred spin off titles since 1987. Early Mega Man games stood out from similar platformers by giving players the choice of which order to tackle the levels and bosses, and by allowing the player to take the weapon from each boss after defeating them. Despite minor tweaks to gameplay over the years, this has been so for all of the games in the main series.

This collection completes the series with Mega Mans (Mega Men?) 7 through 10, following on from the first Legacy Collection from 2015 which gave us the first 6 NES games. That collection was a solid emulation of the 8-bit classics that earned the series its reputation for tough gameplay, cool Robot Masters and weapons and catchy chiptune themes. Mega Man Legacy Collection 2 is a mixed bag, with something for both fans of the original games and newcomers to the series. It brings together games from the Super Nintendo, PS1 and Xbox 360, games that were released 15 years apart, and games that are considered among the best and worst from the core Mega Man series.

Firstly, let me get the technical details out of the way – these are emulations of the games that you remember, enabled to work on modern equipment. Almost nothing has been done to alter the actual games themselves, so what you get is almost exactly what you would have got back in the day, or what you would get if you tracked down the original hardware or reliable emulators. Everything has been left as it was, warts and all. Mega Man 7’s title screen intro still refers to Dr. Wily as Dr. Willy. Mega Man 8’s notorious English overdub (more of which later) remains as deliciously terrible and shambolic as in 1996.

A functional title screen links the four games in the collection, with some good extra features such as extra challenges, galleries of artwork and production drawings and the choice to play in an original sized window (with a range of backgrounds) or to stretch to modern tv dimensions. I preferred to play in wide mode with the full amount of screen taken up by the game, but it did look a little stretched out at first, especially with the older two games. Other modern quality of life features are included, such as a temporary quick save, and a high armor mode, where Mega Man takes half damage. The high armor mode does in some way mitigate the difficulty, but be warned – these are still very hard games.

In terms of the actual games, Mega Man 7 and 8 represent the series at its most experimental as the games attempted first to bridge the gap into the 16-bit era on the Super Nintendo with 1995’s Mega Man 7, and then struggled to stay relevant as games moved into the third dimension and 2D platformers started to show their age with Mega Man 8 from 1997. These two games are probably the least well received and remembered by fans overall. Due to various stylistic and gameplay differences from the rest of the entries in the series, they are sometimes seen as the odd ones out, but are solid games in their own right.

The dip in relevance and popularity of 2D games in general explains the 11 year gap between Mega Man 8 and the release of Mega Man 9 in 2008. Mega Man 9 and 10 are the triumphant return to form, with the stripped down, back to basics run and gun gameplay from the very earliest entries in the series, although with the power needed to let developers create fiendish levels and colourful bosses beyond the technical limitations of the original NES classics. 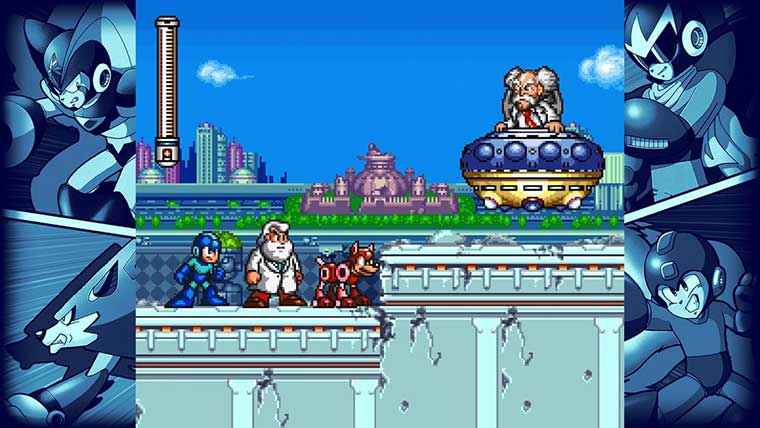 Mega Man 7 is a great game. It benefits from the same burst of color and size that many Nintendo characters got in their 16-bit upgrade, but where as the cartoony sprite art style brought Mario, Link, Samus and others to life in mind blowing Super Nintendo Vision, the lick of digital paint did not have an equally beneficial effect on the Blue Bomber. Unfortunately, the larger sprites and softer edges have a slightly adverse effect on the precision and control needed in a tight platformer such as this, and so the controls don’t feel the same as traditional Mega Man. These issues had largely been solved in Mega Man X (actually the first Mega Man game on Super Nintendo) by making the gameplay faster and the weapons more destructive. So, in comparison to Mega Man X, and the rest of the main series, Mega Man 7 comes off unfavourably, but I think this is actually a little unfair. While Mega Man 7 may not be the best Mega Man game, it is still a really fun and technically solid game, that is a good example of the genre at the time. Yes, the controls are a little clunky. Yes, you have to get through the first four bosses before you can get to the last four. Yes, Bass is an annoying character. But time has been kind to Mega Man 7. If you are new to the series it adds a little variety to the overall collection, and if you’ve played it before it’s definitely worth a run through or two.

Mega Man 8 was released on the Playstation and Sega Saturn  at a time when the gaming world was obsessed with moving into three dimensions, and the outlook for a 2D scrolling platform series was rather desperate. Despite Mega Man’s vintage, by 1997 his whole style was starting to look a little dated, and the concept of retro gaming was still a decade or so away. This shifting landscape resulted in the weird but loveable Frankenstein’s Monster that is Mega Man 8. This game is the furthest from the original blueprint that Capcom ever ventured (in the main series at least) and sees every trick in the book from anime cut scenes to snowboard sequences in an attempt to compete with the likes of Mario 64 and Crash Bandicoot 2.

But as with its immediate predecessor, Mega Man 8 stands the test of time fairly well. It is not a great Mega Man game, but it is a good game overall. The poorly voiced cutscenes are now just funny instead of annoying. The graphics and gameplay are good examples of the genre at the time. The music is notably bland for a series that was previously known for frantic, catchy little melodies, but mostly this does not detract from a solid game, which again provides a little variety in this collection and is arguably an easier entry point for newcomers to the series as it’s not quite as unforgiving as the 8-bit masters. 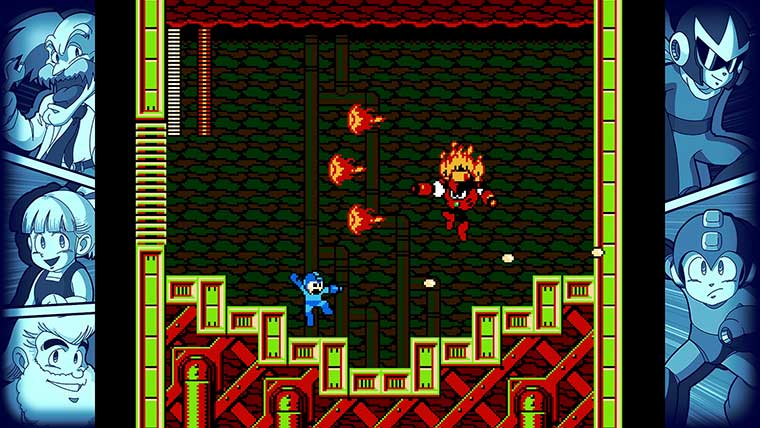 Mega Man 9 is a return to the series roots, with an 8-bit art style, chiptune music, super hard difficulty and even the removal of Mega Man’s slide move and charge shot. It is an absolute masterpiece, some say the best in the series, and was an early success along with Braid and Super Meat Boy in the retro/indie revival that reached the mainstream in 2008. The added power of modern consoles allowed the developers to make a series of perfectly arranged levels and bosses, with cool and varied sub bosses, sometimes more brain-teasing puzzle than platforming dexterity challenge, and a constantly varied palette of colors filtered into the original pixel art that Mega Man is known and loved for. The music is absolutely stand-out, again some of the best and most memorable in the whole series. 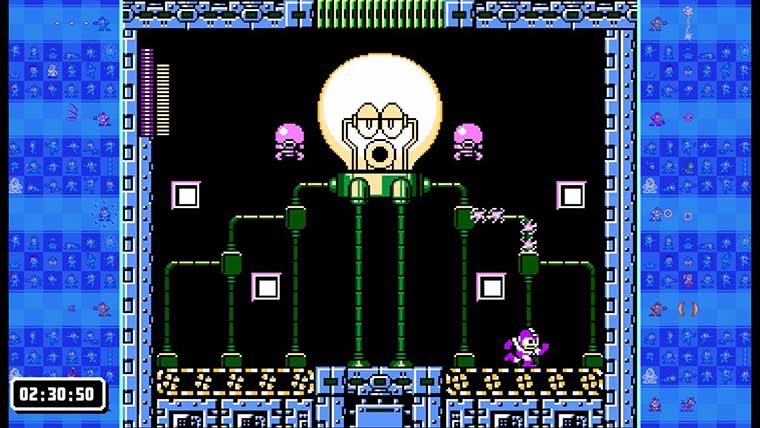 Mega Man 10 followed in 2010, and was the last entry in the main series to date. 10 continues the style of 9, although is not quite as outstanding as the previous entry. Again, this is still an excellent game, an instant genre classic, and highly playable. This time, Proto Man is selectable from the start (and can use the slide and charge shot moves removed from Mega Man), but otherwise it’s business as usual and another addictive, fun, surprising little platformer that relies on the old school skills of pattern recognition, memorisation and precise reflexes.

The Mega Man Legacy Collection 2 is not for everyone – if you are easily frustrated or don’t like platform games you won’t find much here, but for almost anyone else this is a collection worth looking into. Fans of the originals will find accurate emulations of some great games in the series and completionists can get hold of a couple of games that have been harder to find as time has passed. For those new to the series or who missed out the first time, this collection represents a nice introduction to both the classic gameplay and a bit of variety. Whilst not as authentically original as the first legacy collection, Capcom’s latest set of re-releases more than makes up for it with this diverse quartet of great games.